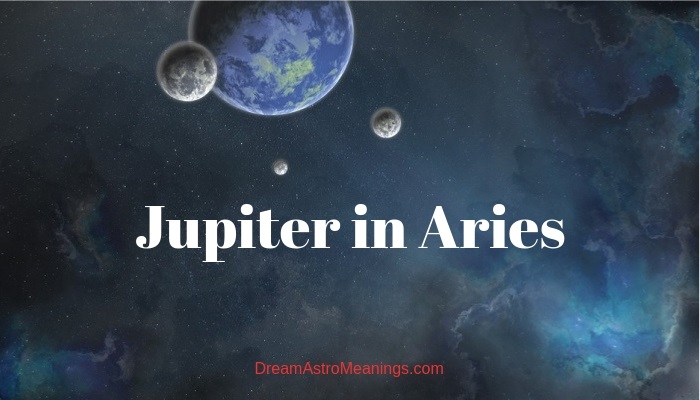 This planet got its name from the Roman god Jupiter. Jupiter was the god of thunder and the sky for the ancient Romans, as well as the king of all the gods in the Roman pantheon. He remained on that throne until the acceptance of Christianity as the main religion in the entire Roman Empire.

The planet Jupiter is the natural ruler of the sign of Sagittarius, and it has the strongest influence when it is in this sign. This planet is exalted in the sign of Cancer and there also has a lot of potency.

This planet is considered a great benefic and it usually has a good meaning. Its influence can be diminished if it finds itself in a sign where it doesn’t have a good influence, as well as when the planet makes bad aspects with other planets in the natal chart. Even if that is the case, this planet usually doesn’t provoke some disastrous events in a person’s life, although it might, if severely badly positioned.

It could manifest as lack of good luck and opportunities for growth and prosperity. If it is well aspected and in a good sign, this planet could help a person’s progress and these people are usually financially well-off, while some are super rich.

The planet Jupiter is not a personal planet such as the Sun, Moon, Mercury, Venus and Mars which have a strong influence on a person.

This planet is a social planet and influences generations because of its slow transit through the signs. It takes around a year for Jupiter to go through one sign.

On the other hand, personal planets transit faster through the signs, and influences people born during these periods. That means that all people born within a span of a year will share the traits of Jupiter in the same sign, while they will also have differences based on their personal planets and their placements in different signs.

The position of Jupiter in different signs is important, but it should be combined with the placement of this planet in a person’s natal chart to get the whole picture. The house where Jupiter finds itself and the aspects it is making with other planet is the most important when determining its influence on the person’s life.

The fact is that this planet’s placement in different signs doesn’t have much value for the person’s personality traits, without combining it with the above-mentioned positions.

In this article, we will talk about the traits of people born with Jupiter in the sign of Aries.

Men with Jupiter in Aries tend to be physically active and often play some sports, for fun or for professional reasons. They tend to be very competitive and put all their efforts to ensure winning a game or achieving some other success. That boosts their ego which is usually very strong.

These men are focused on achieving financial security and providing for their material needs, as well as the needs of their family. Some of these men (especially the ones with bad Jupiter placement in their natal charts) can be prone to taking illegal activities to provide for their financial security and even have problems with the law because of that.

They also need to make sure not to make hasty financial decisions to avoid putting themselves in financial jeopardy.

They are often impatient and want to have everything they desire right away. These men usually don’t take their time to think things through before taking action, and instead decide hastily, without considering the possible consequences of their actions.

Most of these men have confident and dominant personalities and often try to dominate over others in different situations. Some people don’t like that approach and that causes conflicts.

They sometimes have a superiority complex and are very self-centered, and some people get irritated by their attitude.

Women with Jupiter in Aries have similar traits to men with this placement. They tend to be inconsiderate towards their finances and make decisions and actions which could potentially be harmful.

With bad Jupiter placement in their natal chart, they could also be prone to financial malversations and fraud.

These women are often impatient and make decisions without thinking first. They are competitive and want to be first in every situation. They are usually very energetic, which seeks a way to express itself. They are usually sports types and very active.

They choose sports where they could compete with others. In their career and other life situations they also love to be the winners because that boosts their ego, which is often very strong.

In some cases, these women suffer from a superiority complex and have a constant need to prove their value to themselves.

They can sometimes be intolerant because they want things to be their way. Some of these women are very self-centered and desire always to be in the center of attention. They can also be rebellious and have the need to oppose authorities. They don’t like routine and do all they can to avoid it.

Some of the good traits of Jupiter in Aries are:

Some of the bad traits of Jupiter in Aries are:

– self-centered, competitive, thoughtless, prone to making financial and other risks, prone to lawful activities for financial gain (only the ones with bad Jupiter placement in their natal chart), rebellious, desire to be in the center of attention, egotistic, dominant, lack control of their actions, superiority complex, etc.

People with their Jupiter in Aries usually manage to prosper from this planetary position. This planet rules expansion and growth, and when it is in the sign of Aries, this sign gives the person the energy required to pursue their personal advancement and acquire financial stability.

They are sometimes self-centered and egotistic, and demand full attention from those around them. In some cases, these people can be aggressive and very impatient. They often suffer from a superiority complex.

They are usually very energetic and need to find some way to express it, and these people usually do it in the form of physical activities and sports. These people are usually very active and usually play some sports, sometimes for their pleasure, but often to compete.

They are often active sportsmen, who earn their living from their sports activities.

They are very competitive and always desire to be on the winning side. They are attracted by different kinds of competitive sports as well as martial arts. They often use their body as a weapon in their competitions.

These people love success and the satisfaction it brings into one’s life. Success and winning boost their ego and makes them feel content. They often choose competitive professions where their abilities can be presented in full power, such as policemen, firefighters, professional sportsmen, soldiers, etc.

They have powerful and confident personalities, and a desire to dominate in every situation. These traits often provoke conflicts with people who have similar traits. They usually have a rebellious nature and are not very disciplined.

They don’t like routine and obeying rules, and they often oppose authorities sometimes even using force. In many cases they tend to make haste decisions and act without thinking, which often puts them into jeopardizing situations. They need to learn to control their reactions.

This position of Jupiter usually creates people who are independent and love their freedom very much. They want to be able to move freely where they desire and when they desire.

These people are often prone to taking unnecessary risks but they somehow manage to get out unharmed. They are often blessed with good fortune and often rely on fortune’s help when they put themselves into challenging situations.

There are, of course, situations when these people suffer great damage due to their recklessness, but that often doesn’t help them to change.

One of the potential issues these people could experience is a tendency to be greedy. If they have bad Jupiter placement in their natal chart, especially in bad aspects these people can be prone to deceit, greediness and unlawful activities to make a financial gain.

These people might become overwhelmed with their desire for power, wealth, and influence, and with bad Jupiter placements they might end up breaking the law to acquire all that.

Especially dangerous are the combinations of Venus, Neptune and Jupiter. In such cases, problems with the law could be inevitable.

These people are impulsive and are not very observant of the potential consequences of their actions. They often make rash and thoughtless financial decisions which jeopardize their financial wellbeing and can even cause their bankruptcy.

The main advice for these people is to think well before making any financial decisions or deciding to become involved in some unlawful activities for financial gain.

They often rely too much on their luck to get them out of their self-provoked difficulties, but there are times when luck is not on their side.

Jupiter rules spirituality, but when in Aries, it usually doesn’t inspire the spiritual evolvement of people born under its influence. These people are usually focused on the material side of life and putting effort into providing for it.

Jupiter also rules expansion and often causes the growth in the areas ruled by the sign it transits through.

When it is in Aries, it causes growth of the areas ruled by this sign. Because anatomically Aries rules the human head, people with this Jupiter placement often have a bit bigger heads.

Jupiter as a planet influences generations of people born under a span of around one year. Because of that, its meaning should be interpreted as a combination of the sign it is placed in, as well as the house it occupies in the natal chart of a specific individual, and the aspects it makes with other planets.

People born with Jupiter in Aries are energetic and sports types. This combination makes them competitive and they are in pursuit of success and a winning position in all their endeavors, especially their sports ones.

They love competing with others and are often in pursuit for a reason to compete with someone.

They can be very self-centered at times and sometimes suffer from a superiority complex, which is a trait they should work on getting rid of. These people are often rebellious in nature and tend to fight authorities.

They don’t like people telling them what to do and they despise routine, so they do all they can to avoid it.

In some cases, when Jupiter is badly positioned in their natal chart, people born with Jupiter in Aries could be prone to thoughtless financial decisions and risks, as well as illegal activities to gain finances, which often causes issues with law authorities and other problems.

In general, these people often have a problem with their haste and reckless actions and decisions.

They usually act before giving the situation proper thought and suffer damage because of that. They mostly rely on their luck to pull them out of these self-made situations, but in many cases they end up putting up with the consequences of their actions.

These people have a confident, but often dominant nature, and they like to be in the center of attention in all situations. Many people don’t like that and that causes conflicts and disagreements.

They often have issues with self-control, which is something they should work on dealing with because it could be a major cause of problems in their life.