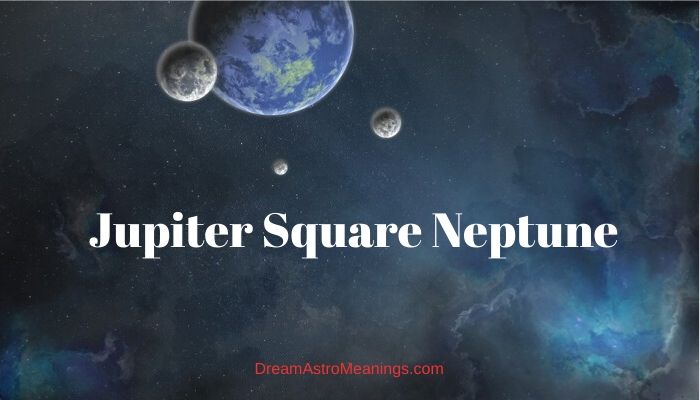 Astrology is a complex discipline that could tell us much about ourselves, the world we inhabit and ourselves in relation to this world and with other people.

Synastry analysis is one of the methods meant to figure out how people function amongst themselves, how compatible they were, especially when it comes to love and romantic relationships.

Jupiter square Neptune is the aspect we are going to analyze today and see how it affects one relationship. Of course, you have to bear in mind that it is not sufficient information that could determine the course of that relationship.

In fact, every insight into synastry could only be taken as a useful, incredibly interesting and, at times, challenging guidance.

Astrology is not a science of predictions, but of potentials; it is not fortunetelling, but a serious and complicated system of analyzing planetary movements and its effects over human lives and our world, although considered a pseudo science.

In old times, astronomy and astrology were one. Today, it seems the connection between official exact sciences and old spiritual views grows stronger once again.

However, astrology is still amongst the alternative practices. Nevertheless, many turn to it to search for answers, mostly related to their personal life and experiences. The first important part of astrology that interests us here is natal astrology. Without it, we could not interpret the synastry.

Natal astrology analyzes the exact distribution of planets, in a diagram that represents that same distribution at the time an individual was born.

According to astrology, planetary vibrations and energies they exchange in specific aspects determine, in a way, what kind of a person that individual could be and what life he or she could lead.

We deliberately italicize this word ‘could’, in order to emphasize that natal chart does not tell what would happen or how would one exactly manifest his or her traits.

The insight into such a chart tells about possibilities and potentials; the rest is up to you. Learning about it could help you become the best version of yourself.

Now, why was this so important, if we were to talk about synastry? Well, synastry represents a study of two natal charts in comparison to one another. Therefore, it is essential to know the individual charts into detail.

Since synastry is usually related to a romantic relationship or a potential one, the one who analyzes it would also focus on specific parts of both natal charts.

To put it very simply, synastry interprets interconnection and interplay of planets from both charts, aspects they form in relation to one another.

However, synastry is different from composite charts, because it does not merge natal charts, but analyzes aspects point by point.

The synastry report would tell you about compatibility of two charts, reveal weak and strong points there, point areas where partners should invest certain type of effort in order to manage it et cetera. Seeing favorable aspects in synastry is, of course, beautiful and encouraging.

Many factors would determine your relationship, its course, its duration and more. You should take synastry as a guidebook.

Jupiter in Mythology and Astrology – The Importance in Synastry

Jupiter was known as the Roman god of justice, also the god of thunders and lighting and everything that has to do with phenomena related to skies. He was also known as the deity that sends rain to the earth.

The thunder-god Jupiter rules all the earth and heavens, according to ancient myths. He divided the rule over the world with his two brothers, after overthrowing his father, Saturn.

In Greek mythology, Jupiter is Zeus. Zeus would come amongst people taking the form of a common human or an animal. His name has always been associated with rule and justice.

Jupiter is like a judge who tries to create a harmonious, just and rich life for everyone. Jupiter was the protector of all heavenly and human laws.

In astrology, Jupiter is associated with wisdom and just rule, so the planet has always been taken as a benevolent master of time, the one that brings fortune and abundance. Many would say Jupiter plays a protective role.

Compared to Saturn, since Jupiter and Saturn both fall under the category of social planets, Jupiter represents expansion, while Saturn represents restriction.

In horoscope, just as in a person’s character, Jupiter awakens the sense of justice, morality, goodness. The astrological symbol of Jupiter is a crescent moon upon a horizontal cross, which implies spiritual is in greater effect in Jupiter, in contrast to the material. Therefore, Jupiter embodies generosity, mercy and wisdom.

Jupiter is primarily associated with knowledge, higher education, and the material aspect in terms of concrete possibilities of obtaining wealth. It is also associated with travel, faraway lands, need to expand your views, with foreign people and foreign languages.

Jupiter is a guide, tutor, guru; it represents institutions such as faculty, subjects as philosophy, religion, faith.

People with a strong Jupiter in their charts are usually fortunate when it comes to well-being, material richness, social positions, but it comes natural to them to deal with such things. Jupiter is benevolent and it does not make one arrogant, but happy.

This benevolent planet is our astrological protector; we shall see how it acts in square with Neptune in synastry.

Neptune or Poseidon was the ancient god of the sea. He was not always considered the lord of all waters, but that is how most of us know him. Neptune was Jupiter’s brother and also Saturn’s son.

Neptune has always been considered a god of unpredictable mood, temperamental, violent, even and impulsive. People living on the coast were in awe of Neptune.

It was believed that Neptune protects those who travel across the sea, but he could also cause terrible sea storms and earthquakes. He was not a deity one would like to provoke.

Neptune is often represented with his trident and this is also the symbol of the astrological planet Neptune. This symbol implies that the Soul wants to get away from the Material and reach the Divine.

In astrology, Neptune is considered a mysterious planet, the planet of illusions, dreams, that infinite search for realms divine, perfect, ideal, imagined. It rules the imagination through inspiration; it inspires art, but is not artistic as the aesthetic Venus was.

Nor is its imaginative nature that of the Moon. Many astrologers would describe Neptune’s nature as characteristic.

Neptune symbolizes unquestionable faith, hope, dream, daydream, everything unconscious and sub-conscious, everything that makes us wonder if what we see and experience was a dream or reality.

Neptune is an ideal, a prayer, an imaginary realm, psychic ability. A bit of Neptune’s energy is healing, but the excess could be a poison, astrologers would say.

Neptune is the patron of artists, especially painters and musicians; it is strong in hypersensitive and spiritual persons, doctors and all those who have experienced the blessed (or cursed?) platonic love.

Neptune inspires creativity, imagination, idealism, but it also creates illusions, even lies and deception and it could lead to vices and addictions.

The square aspect is a 90 degrees angle between planets in astrological charts. It is considered a heavy aspect, but it is different from opposition. In square, there are no oppositions in basic sense, but it does not allow planetary energies to flow free.

This is an aspect that does not have consciousness in itself, but that should make us awaken our consciousness and work on problems.

For problems are what the square brings; it is the aspect of a tense energy. Everything that square moves us towards has to be in order to relieve the tension. It is not an easy, but a challenge process.

The square brings conflicts, lack of understanding, and lack of ability to make compromises. It should make us try to find the balance within the area of life affected by this aspect.

Jupiter Square Neptune is not a catastrophic aspect, though it requires an effort from both parties in order to be handled well and under control. Unfavorable aspects with Neptune often require control, a bit forced (at least at first) realistic view on things.

The problem that could occur with such an aspect in synastry would likely be related to ethics and religious views.

These are important points in any type of a relationship, be it romantic or another one, so it is something that should be worked through. This connection would very likely lead to some degree of lack of trust between partners.

Most commonly, Jupiter would suspect Neptune’s truthfulness. This is a relationship that would likely be on a constant faith-confidence test.

It could be very challenging and it is likely that the Neptune person, since more prone to illusions, dreaming, imagination and adaptation, would lie, in order to avoid unpleasant arguments and conflicts.

This is a typical pattern when you have a planet in square with Neptune in synastry and it usually starts out of Neptune’s good intention.

Trying to protect him or herself and not to hurt the other part, Neptune would play along, playing a role that would please the other part, though unreal. There could also be secrets and hiding things and unspoken things. In the long run, it would poison the relationship.

Jupiter person that praises justice above all and roots beliefs rather in knowledge rather than in a dream would not enjoy such a game, seeing through it.

Although this connection might be a bit confusing, as all connections of the sort could be, painted with Neptune’s elusive, though alluring, vibration, it is definitely not something you cannot work out.

The main problem is different opinion and experience of ethics and religious views.

While Neptune was more intimate and dreamy in terms of religious and spiritual experience, Jupiter is far more traditional.

These completely different views on spirituality and religion could lead to distancing. It is interesting to note that both of these could be highly spiritual and interested into the religious, but so different in their conceptualization of it. Well, Jupiter conceptualizes, Neptune dreams and fantasizes.

However, what is also characteristic of this interesting connection is that these two amplify the overall sense of hope, belief, and luck. This connection brings in a strong sense of being soul-bound; the connection is very strong and it leads you booth thinking that together you could do anything you dream. It is a good side of this connection, but also a risky one.

It is something you should nurture, though carefully, since it could lead to irresponsibility, getting lost in idealistic expectations. Jupiter could surrender to the dream and start believing in mere luck, neglecting the mundane, practical responsibilities.

Neptune could amplify overall sense of luck and maintain this illusion. Try to keep your feet on the ground, which would help things work out fine for your relationship.