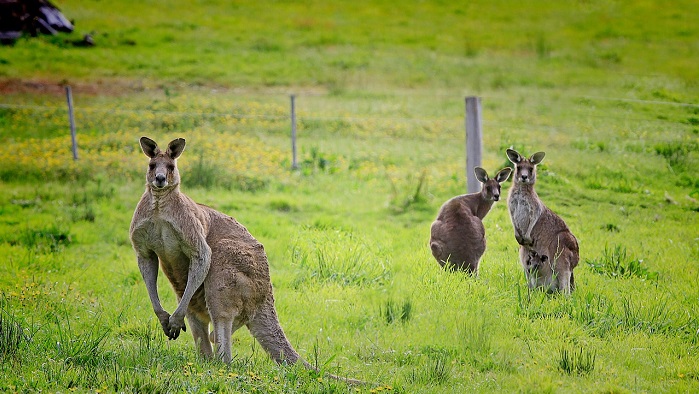 For most of people around the globe, this amazing jumping fellow is another of fascinating exotic animals. Its unusual appearance and definitely impressive physical features and skills inspire us and remind us of how incredible the nature is.

This charming mammal is universal symbol for family care and parental love; it makes us realize that bonds between our beloved ones and ourselves is something we should value above everything else.

Kangaroos are simply adorable creatures and, yet, they could even be dangerous. These exotic animals are very strong and very protective.

They nurture specific bonds amongst themselves, particularly, the connection between a kangaroo mom and her little one is literally unbreakable.

Did you know that females are actually pregnant or nurturing almost all of the time?

Kangaroos remind us that love between parents and children is one of the most important concepts in life.

These strange looking mammals belong to the sub-class of marsupials, animals that give birth to not fully developed babies.

They have especially designed ‘pockets’ on their bodies, which serve as a warm home for their little ones, until they grow up and are capable of entering the world.

These little ones could only reach their mother’s breasts and feed on their milk. Kangaroos’ pockets are very deep and designed that way so that a young kangaroo does not fall out.

Most of marsupials inhabit Australia, including kangaroos. According to historical data, the first European who has seen these strange animals was the Dutch captain Francisco Pelsaert and the event took place in the first half of the seventeenth century.

Another source claims that kangaroos’ meat was actually eaten by some people visiting Australia later during the same century. 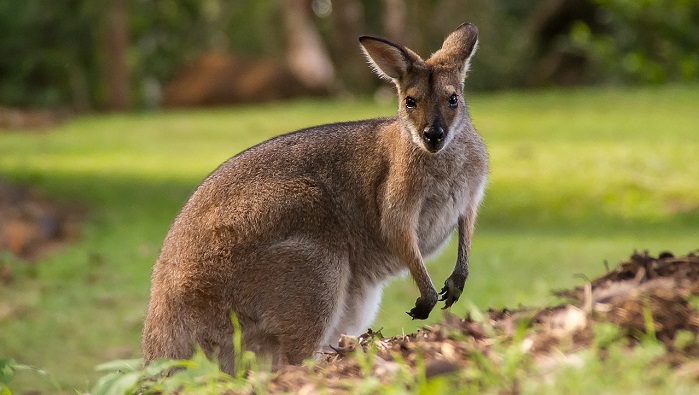 Captain James Cook’s expedition had caught several of these animals, while the first two kangaroos were taken to Europe by the end of the eighteenth century. They were a true attraction and people would pay incredible amounts of money, just to see them.

Kangaroos were taken directly to the royal palace of London city. Kangaroo is one of national symbols of Australia and kangaroo motifs are commonly present in various types of designs associated with the continent.

Kangaroo motifs are to be found on Australian Coat of Arms, on their money and so on.

Moreover, it is used all around the world to represent anything related to Australia.

Numerous brands of various parts of industry use a kangaroo image as a brand logo or something else. In Aboriginal art, we could find some of really amazing and colorful depictions of these fascinating marsupials.

These mammals are found exclusively in Australia. There are several subspecies, vary in sizes and types. We usually think of the big one, Macropus giganteus, but there are also smaller ones and more timid marsupials closely related to this one, also called eastern grey kangaroo.

People of Australia love kangaroos and are proud of this unique national animal.

Kangaroo symbolism is based upon amazing interesting facts about these mammals’ physical features.

Kangaroo is universal symbol for motherly love, care and nurture. A mom kangaroo would feed their little ones until they are eighteen months old.

In addition, they spend about nine months in their mom’s pockets.

This strange habit is nowhere else to be found, in all of the animal kingdom. This special connection between young kangaroos and their mothers make these animals symbols of deep bonds between a mother and a child, unconditional support, love and bounds in general.

As we see, kangaroos have strong and long lower legs that make these animals uniquely recognizable. Kangaroos do not know how to walk normally and they do not use four legs, as most of other animals.

They move by hopping around and keep the balance by using their long and very muscular tails.

There is no other animal moving around like that. This strange manner of walking amuses and impresses us, at the same time.

Kangaroos’ jumping symbolize speed, avoidance and rush, but also happiness and joy. Kangaroos might be caring moms, but males are not as gentle as female kangaroos are.

These animals could behave extremely aggressively towards one another. In nature, kangaroos do not have many enemies and they are well adapted and equipped to survive.

However, they fight amongst themselves to ‘win’ a mating partner.

Kangaroos are also known to attack humans. They are not as friendly and gentle as they appear. These animals are true boxing champions. Males would fight each other by hitting one another and jumping around, just as boxers do.

This makes them a symbol of aggression, strength and fight.

Kangaroos are also known to be attached to their territory and they do not likely humans entering areas they consider their own. If you think of them as cute hopping fellows, you are wrong; chances that a kangaroo could hurt you are great.

Now let us talk about kangaroo totem. What is it like? What qualities it offers? Kangaroo totem is rare and interesting one. This amazing spirit animal grants you protection, support and love throughout all the phases of your life.

Kangaroo people are generally optimistic fellows, extremely determined and decisive. They are mentally strong and they do not tend to complicate their own life.

However, they could be too rushing and thoughtless.

Kangaroo people are supporting, caring and very protective. They could even be overly protective of those they care the most, especially children.

On the other hand, Kangaroo people could act as little ones; they seek protection, guidance and love from others. On a positive side, that makes very strong bonds and builds up true loyalty, guardianship and mutual understanding.

On the other hand, it could make a person much dependable on others and very insecure. It is all about balance.

If you are a Kangaroo person, you should always have these things in mind. Care about your dear ones, but do not pamper them that much. Seek both love and support, but see to be capable of relying on your own self. While kangaroo people do have their vulnerable side, they could also become very aggressive and difficult to deal with.

Generally, they are not that easily upset, because they are self-confident, determined in their goals and mentally strong. However, you do not want to irritate them.

A Kangaroo people would not hesitate saying anything he or she thinks aloud, even if that could hurt someone else. They are direct and could be harsh and insensitive.

Kangaroo people are quick and open minded. They are not afraid of risking and they love to explore new possibilities. They are of adventurous spirit, always seeking for excitement. They would rather ‘jump in’ into something new and uncertain, than stay in routine.

That is generally good, but it could make them rush and act without thinking.

These individuals are also likely simply to avoid obstacles they are faced with, if they believe they cannot overcome them. Kangaroo individuals see life as a game. They are of a joyful nature, easy to fit in and socialize, but they have their ‘moments’.

These people are very friendly and they love to spend time in company, while in private, they usually have only few close friends and they are extremely attached to their families.

In general, these individuals are modest and they do not ask much. They are capable of taking care about themselves and are likely rather to build up their world by their own hands, than to use something made by others.

People guided by this energetic and inspiring totem are highly active individuals. They do not like to sit still and wait for things to happen. In addition, they move others.

They are not leaders, but their friendly advices or interesting stories about their rich life experiences could give others great motifs and ideas on what to do with their own life.

These people are courageous and always stand their ground.

However, every Kangaroo person deep down inside has his or hers tiny little one that dreams about cuddling under a fluffy warm blanket and being pampered and loved.