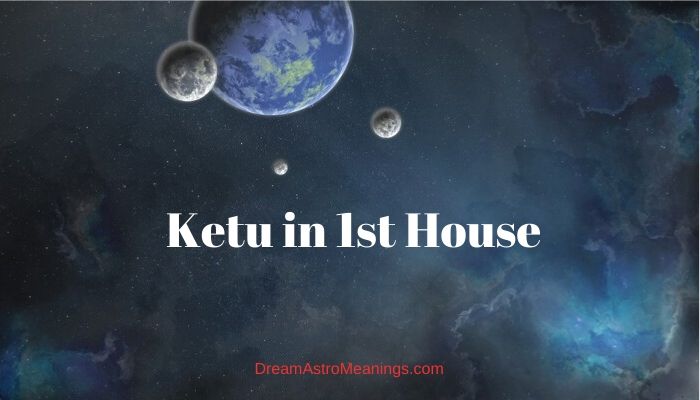 Ketu and Rahu are terms that come from Hindu astrology, known as the Vedic Jyotish. The term could be translated as the ‘true divine light’, since the term of Vedic means ‘wisdom and the truth’, while Jyotish is a combination of words meaning ‘light’ and ‘god’.

The term Jyotish also refers to eyes, because it allows us to see through the otherwise non-comprehensible length of time – the past, the presence and the future.

Why was Vedic Jyotish important and why we need it? Primary goal of the Jyotish is to help us perceive our own being, our own existence (dharma, in Hindu tradition). It is meant to light up our path and help us reach balance and harmony with and within the universe.

Its secondary goal is the revelation of the past, presence and the future of the subject/object, which leads to better cognition of the best natural flow that would reveal to us our true strength and our weaknesses.

Hindu astrology could reveal practically everything; in theory, the astrologer could unveil and discover everything to the level of the inhale and exhale.

What is also very important to mention is that Vedic Jyotish offers corrective measures that would help one get rid of the life problems. On a higher spiritual level, it offers spiritual cleansing, purification of the soul.

At the first sight, Hindu astrology seems a bit paradoxical. Well, if everything was already determined, our past, presence and the future, why would one need any corrective measures? Does it actually mean that everything was written in the stone and that all we have to do is to follow our destiny?

In Vedic astrology, we have Free Will. It is limited by our previously accumulated bodily and mental activities – that is karma.

This flow of the free will could be modified within the beforehand defined karmic field. Our previous karma gives us current effects and, in this way, it also affects the next karma. It works as a propeller.

There are four types of karma, the good, the bad, good and bad and neither good nor bad.

For the most of people, karma cannot be absolutely good, but it is not ultimately bad, either. All we have to do is to act towards the greatest good and the minimal evil.

Rahu and Ketu are the South and the North Lunar Node in modern astrology. As we have said, they come from Hindu astrology and correspond to specific principles.

In astronomical terms, Lunar Nodes are points of the Sun and the Moon path’s intersection, as the two luminaries move. The first is the cause and the second is the consequence.

Many seek for the meaning of Lunar Nodes in karmic astrology, believing that these two points have to do exclusively with our past lives, but that is not true.

Lunar Nodes play their part in our present lives, as well. We could use a metaphor of a faucet to describe the North Node and that of a drain to illustrate the South Node. What happens in between the two is the flow of life.

Let us turn to Vedic sources, in order to understand the significance of Lunar Nodes.

According to Hindu legend, the dragon has stolen the elixir of immortality from the gods.

The Creator has slain the dragon and cut him into two halves. However, the creature was already immortal, so it did not die – its head and tail continued to live separately. In order to take revenge on the cosmos, the two have swore to chase the Sun and the Moon, in order to devour them.

In Hindu astrology, as we have said, Rahu and Ketu are more powerful than planets, even if they were only points in space and not heavenly bodies.

Their effect is, at the same time, antagonistic and complementary. One cannot be without the other, but they also oppose one another.

Their nature, as being interpreted in many different sources, appears to be oddly similar to the nature of planets Uranus and Neptune, the ‘new’ planets (they are new, because Uranus, Neptune and Pluto were discovered centuries and centuries after the classical ones).

Lunar Nodes are both benefic and malefic. They are capable to fulfill our greatest desires and, by doing so, to bring us the greatest misery. On the other hand, they are powerful benefactors.

Their positive flow could be so strong that the luckiest of planets, Jupiter, appears miserable and stingy, compared to Lunar Nodes. Nothing out of the ordinary happens without the effect of Lunar Nodes.

Ketu, the South Node, the Dragon’s tail, Cauda Draconis, is related to our past. It is like an archive of all data related to our previous incarnations. It is also associated with our roots and with all the characteristics of our ancestors and ourselves, as related to them.

Our genetic code is associated with the South Node. Ketu represents all the knowledge and habits we have acquired during our previous lives.

We carry this knowledge from one incarnation to another, filling the bag of our data with novel information. Ketu offers us an insight into our karma and into all the decisions we have been making throughout our previous lives.

In astrological charts, the South Node relates to our weaknesses and flaws that easily attract us by the automatism of our previous experiences. They tend to manifest instinctively.

We tend to act to the tune of our habits, ‘locked’ within the South Node, instead of stepping out of the comfort zone and listen to advices of Rahu, the North Node. You could find countless examples of such behavior in lives of the people around you and in your own life.

How many times have you decided to follow the same path, knowing that it is not particularly productive or even useful or good, simply because you were used to it?

The change requires an effort. The habit, represented here with Ketu, is nothing else than an established model of behavior from previous lives. If we surrender to this model, we stagnate.

On the other hand, the South Node also brings us many good things; the inheritance from previous lives could be precious, in this sense. It carries our talents, skills, lessons, capabilities and many more.

These are elements you should use in your current life, not to discard them; they could be improved, perfected, built up.

However, there is a catch. If you completely surrender even to these good sides of Ketu, your identity may become shaken. You could start feeling insecure and unsure of your own worth and value. Many astrologers identify the South Node with Achilles’ heel.

It could be amazing, but it could also be your ruin. Ketu in a natal chart could tell many things about a person. Let us see what happens when the South node meets your First House.

This house is often designated as the house of life. The First House is related to one’s identity, personality, personal attitudes and convictions, characteristics, physical appearance, self-representation, individuality, the way the person perceives him or herself and the way others see the individual.

This is the house of reputation and about the impression one leaves on the world.

This first astrological field is associated with all our predispositions. It is about the beginning the birth and the circumstances in which the person was born. This is the house of our moving energy, of motivation and aspiration. It defines one’s temperament, habits and behavior.

When reading a natal chart, the First House tells much about one’s Self and the attitude towards it and towards the world.

People who are self-confident and generally self-focused would have more planets inside the First House; it makes their first field very dynamic and the Self emphasized. This is one of the angular/cardinal houses and also a Fire house. It is analog to the fiery sign of Aries.

People who have many planets inside the First House tend to be very ambitious, charismatic, energetic, vital, active, dynamic, temperamental.

They are initiators and leaders, people with the incredible strength of will and motivation. They impress others and have a very strong Ego.

Besides planets, we have powerful Lunar Nodes that could also be inside houses. Let us see how Ketu acts inside the First House.

Ketu in the First House – Ketu in 1st House

The South Node Ketu in the First House automatically means that Rahu, the ascending node will be in the opposite, the Seventh House and vice versa.

With such positioned Ketu, the native has to overcome numerous issues in the area of partnership, marriage and cooperation with other people. In previous incarnations, this native had to rely solely on him or herself, when it comes to making decisions and taking action.

In the current incarnation, the soul of the native recalls its individualism and independence, much enjoyed at the time.

Although this personality strikes you as a good listener, he or she rarely, accept other’s opinions or advices.

This native listens only in order to be accepted within the society; he or she rarely changes their previous convictions. The native is prone to wasting the energy along with improving and building up his or her qualities and skills, seeking approval and admiration for the invested effort. This native needs confirmation from others.

Although this native would never admit so, he or she barely notices other people around; this native is very egocentric, in these terms. In addition, this is a distrustful personality.

There is a constant suspicion and caution, for the native is afraid of possibly being tricked, manipulated and made an advantage of. First House Ketu person would rather follow a darker path, in order to keep their position and status.

If the rest of the native’s horoscope indicates a great strength of character and will, this is a person who aspires high, one who would not accept less than being the first, being on top of the mountain.

Although experiences from this incarnation teach the importance of sacrifice in the name of others, this native is very unlikely to act so. It is so, because, through previous incarnations, this person has reached the state of being an independent spirit.

First House Ketu personality strives for the ultimate freedom. Whenever he or she feels as if another person, even the closest one, tries to control them (well, they would perceive anything as a sign of control), they would step back, rejecting the another.

These people are often single or divorced, separated; they are not inclined towards marriage. They would act as a boss and would rarely cast away any of their initial ideals.

This native projects as being more important than he or she truly is, desiring the spotlight. First House Ketu person also has a desire to control others; it is the basis of his or her security. He or she is capable of great enterprises and achievements.

Many see these individuals as strong and independent loners, which they are, for a great part. However, behind their façade, this person trusts only him or herself, which brings their loyalty into question.

The lesson a First House Ketu person has to learn is to step back from the egocentric ideals.

All the trust, strength and power he or she has required in the previous incarnations, this native should direct towards others, in a good way.

He or she could make others believe in themselves, if doing so. He or she has to learn the art and the bliss of generosity and selflessness, which is definitely not an easy task, being the contrary of what was learnt.

Only then this native would stop feeling tense and in disharmony with the universe.