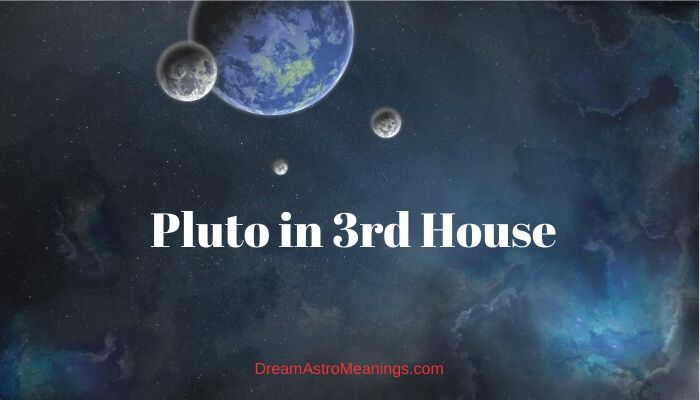 Natal charts are diagrams of planetary patterns unique for each individual, created after one’s date, time and the place of birth. That said, a natal chart represents the position of planets at the time of one’s birth.

Natal charts consist of many elements of which the basic were the planets, the signs and the houses.

While signs could be understood as ‘roles’ the planets play in the chart, houses could be taken as their ‘stage’. Let us see into the stage of the Third House.

The Third House is linked with the sign of Gemini; it is a cadent and an Air house. As such, the Third House stands for the field of communication, in the widest sense possible.

This house is about communicating your messages by using various channels. It includes both verbal and non-verbal communications skills and gifts. The third field is about all of that.

When someone mentions communication, people commonly identify it with conversation, meaning talking to other people. Communication is much more than that. The way you move and look at people, all the mimics and gestures, play an important role, as you definitely know.

One’s potentials regarding expressing their thoughts, ideas, concepts and feelings lie inside the third field.

This house could reveal if the native was likely to have problems when communicating with other people or not. Will he or she be skillful in writing or speaking, using words, presenting their ideas non-verbally and so on; all of that we could learn through the third field.

The Third House could indicate fruitful collaboration with influential people, showing someone’s talent for perfectly communicating their ideas to such figures.

It could also indicate the very opposite of that; one’s inability to create valuable contacts through communication.

The Third House indicates all kinds of misunderstandings and troubles in communication, as well as the opposite.

This field also has to do with using logic and practical mind. It is about the types of analyzing and resolving problems. This field has much to do with the immediate environment and using logic in order to fit in and take the best out of it.

It also has to do with our attitude towards values and principles set by our environment. This is the field of learning and early education.

The Third House also relates to short trips and movement, experience of the immediate environment, transportation and traffic, childhood and childhood experiences, communication in general, with an accent on contacts with people from the closest environment, especially with brothers and sisters, but also with our relatives and neighbors.

In ancient Greco-Roman tradition, Hades or Pluto was the god of the dead and the underworld.

The complicated background behind ancient gods, their origins and functions is astounding, though people commonly think of them in simplified terms. We will stick to the common views, for the sake of brevity and easier understanding.

Although astrological planets and gods whose names they carry are not counterparts in the direct sense, they do share certain meanings and symbolism.

Pluto was the god of the realm of death and the afterlife, but he was also associated with certain other concepts, such as the concept of wealth and abundance.

He was sometimes depicted holding the ‘horn of plenty’, the cornucopia. How the god of the underworld was the god of plenty? Well, his domain was not only souls of the dead, but also deep underground materials.

He ruled over the depths of the earth, where precious minerals could be found and also layers of the ground needed for a fruitful and plentiful harvest. Well, death and life are interwoven, in a wider sense, and ancients knew that.

However, as a god of the death, Hades was not popular amongst ancient people, as expected. Greeks would not even dare to call his original name aloud.

Nevertheless, Pluto was not said to be a cruel or evil deity. He was solemn, just and quiet, but merciful towards people who have lead good lives. In general, he was less active than other ancient gods were. He would rarely leave his underworld kingdom, because he had no need to do so.

As gloomy as it may seem, everyone would eventually end up in his domain, since death is certain to all mortals.

How he became the lord of the underworld? Pluto was one of Saturn’s children; the son of Saturn and Ops. His brothers were Jupiter and Neptune, gods of the sky and king of the gods, and god of the sea.

In Greek mythology, we have Cronus (Saturn), Zeus (Jupiter) and Poseidon (Neptune). The Greek myth says Cronus devoured his children, in order to prevent them from overthrowing him.

He himself usurped his own father’s throne, castrating Uranus and overthrowing him, so he was afraid of such a destiny. Rhea, his wife, hid one of the children, Zeus and he eventually managed to bring Cronus down and release his brothers and sisters.

The three brothers mentioned shared the rule over the world and so Hades or Pluto got the underworld.

Characters of Pluto and Hades are a bit different, but their function as the god of the dead was the same. This god was quiet and relentless, fair and strict. He should never be associated with concepts of evil.

In the following paragraph, we shall see if there were some similarities between the god Pluto and the astrological planet, the dwarf-planet of the same name.

Distant and mystical, Pluto is not even called a planet anymore; astronomers recognize it as a dwarf planet.

There were personal, social and transcendental ones. Uranus, Neptune and Pluto fall under the last category.

This class of planets find these celestial bodies collective planets, since they are linked to the impersonal, unlike the first five ones, associated with purely personal qualities and the next two, social ones, associated with social organizing, the attitude towards social concepts and so on. The transcendental of our lives lies beyond these domains.

Pluto is the higher octave of Mars, the planet of war, blood, aggression, domination, potency and carnality, amongst other things.

Thus, Pluto also has to do with power, but the power of Pluto was hidden, mysterious, undercover, dangerous, as well as magnificent. Pluto is commonly associated with magical and psychic powers.

Distant Pluto represents an incredible source of energy; it has potential for amazing things, but also for devastation. Therefore, Pluto is the planet associated with both destruction and renewal, regeneration, transformation and rebirth.

Pluto rules the sign of Scorpio and qualities of Scorpio are an enigma of their own. Libido and carnal pleasures are associated with it. Influence over others, for better and for worse, as well.

Pluto’s powers are subtle, almost elegant and thus dangerous and threatening or majestic, depending on the position and aspects the planet forms. Pluto is associated with crime, manipulation, possessiveness, obsessions and jealousy.

It is associated with the unconscious, with the deepest desires, and with the darkest ones, with instincts we would rather not be aware of.

Although it might appear as if Pluto was only a dark, gloomy planet that brings destruction and awakens the darkest impulses in a human being, things were not that simple; they never really are.

Pluto also possesses the incredible potential for regeneration and transformation, processes needed for growth and progress. Pluto is also spiritual enlightenment and self-awakening.

Pluto grants almost unmistakable intuition and people who are influenced by this planet are likely deeply intuitive. Their intuitive powers would extremely rarely trick them. They have an incredible potential to heal.

Pluto is also associated with deeper and higher knowledge, with deep meanings, with existential questions and purpose.

Pluto in the Third House – Pluto in 3rd House

Pluto in the Third House would affect how the native understands and accepts what he or she hears or reads.

The native questions the authenticity of everything and suspects every piece of information.

This makes for an incredibly analytical mind, which instinctively searches for hidden meanings. Now, the manifestation of such a trait would depend on the individual.

While, to some point, analytical approach could be fantastically useful, it is not always the case. The gap between a distrustful and suspicious person and the one that sees things bellow surface is wide. On one side, this insightfulness is great.

The native has only to look at you and see what kind of a person you are. This is exactly the opposite of being suspicious.

The native does not need to question one’s loyalties or qualities at all; he or she knows you exactly the way you were. This saves plenty of time and wasted words, if we could say so.

If you have this gift, so call it, you would not waste time on people and things that are not worthy of your time, emotions and energy. You will easily recognize people you could trust and people who offer high quality content.

On the other hand, the need to inspect and analyze every information the native gets in touch leads to suspiciousness and doubt. The native thinks everything has a hidden meaning and often reads between the lines.

Well, reading between the lines could be useful, but it is not always necessary and it is certainly not useful on every occasion.

Such a habit or, better to call it an instinct, would eventually make native in-read non-existent meanings. While all information could have a deeper meaning, it is not exactly the same as hidden meaning.

The problem is that the native suspects everyone is lying and that is definitely not a way to go. It is actually surprising how direct and straightforward people could be and how simple many things were. However, a Third House Pluto tries to make you believe otherwise.

Besides having a fantastic intuition and seeing through people, if we take the bright and a good side of this combo, the native with Pluto in the Third House could be an impressively persuasive person.

This native chooses words carefully and effectively. He or she knows when, where and how to say things.

The medium is not that important; these natives could influence both wider and smaller audiences through spoken or written words.

The native is authoritative, convincing and determined in speech. He or she is focused and elegant in speech or a written word and irresistibly convincing.

Being persuasive and convincing are traits of a very self-reliable character, especially when it comes to getting information and learning. This person often resists to concepts and systems of conventional education and prefers learning from personal experience.

This rebellious attitude sometimes comes out of fear of losing identity by being too influenced by others.

The power of persuasion through carefully, wisely and intelligently chosen words could turn into stubbornness or imposing opinions and manipulation.

The native is very self-defensive when it comes to letting other people learn something about them; they are, in fact, afraid of losing reputation and being vulnerable. They use their impressive communications skills as a shield.

Let us borrow something from John Milton and his famous poem; at some point of the story, his arch-villain says that he was self-begot and self-raised. Well, this is a proud attitude some of the Third House Pluto could identify with.

Through words and communications skills, they build their identity and, at the same time, guard it. They would not let others influence them, in fear of losing themselves; hence resistance to learning from others.

Well, it would be of great use to lower the guard a little bit and learn from other people. This means you should trust others a bit more than you do.

While learning from personal experience is the best school, you cannot actually directly experience everything the world has to offer and thus use the information you got. Knowledge that comes from others could only enrich your own.