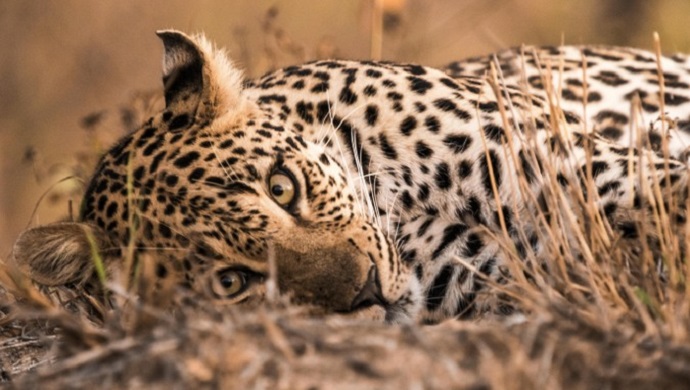 The leopard is one of the wild cats, which lives in Africa and parts of Asia. This animal is considered endangered, mostly due to loss of its habitat and illegal hunt. Leopards are almost gone from Singapore, Hong Kong, Syria, Tunisia, Kuwait, Libya and Morocco.

They have a similar appearance to the jaguar, but they leopards are smaller. When they are black in color, they are called black panthers just like black jaguars. Their fur is covered with dark spots which serve as camouflage. Leopards are strong animals, capable of moving their prey’s carcasses into trees.

They are also very adaptable to different habitats, and live even in mountain areas. Leopards are very speed runners, able to run up to 58 kph.

In antiquity, the leopard was considered a hybrid between a panther and a lion, and the name is derived from that belief. The name leopard was first used in the 13th century.

The leopard subspecies which exist today are believed to have first emerged in Asia and from there they have transferred to the African continent.

The remains of leopard fossil bones are found in Europe as well.

The skin color of leopards varies, depending on their habitat and climate. The ones living in forests have darker color tones than the ones living in dry habitats. The rosette pattern on their bodies is unique for each individual.

Although in decline, the leopards have the largest allocation, comparing to other wild cats. Especially in Africa, where other species of wild cats have already disappeared, the leopards are even flourishing in some parts. In North Africa these animals are on the verge of extinction.

Leopards and humans pose a threat to each other, mainly because the leopards prey on the livestock. 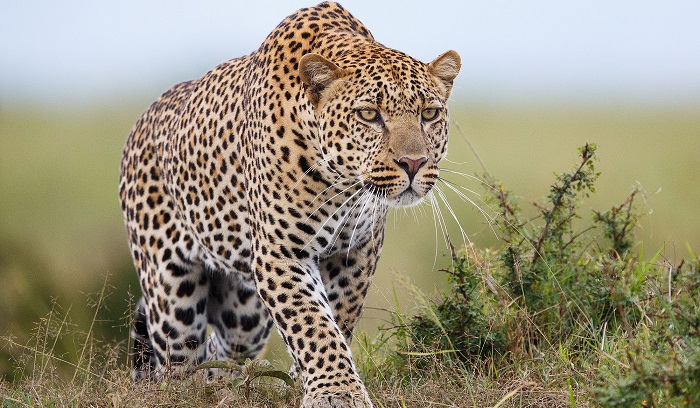 These animals are incredibly adaptable. They can manage to survive in many different habitats. They even inhabit the Far East of Russia, where the temperatures go as low as – 25°C. They survive in deserts as well as humid rainforests.

These animals are known for their superb abilities to approach stealthily to their prey, without being noticed. They are mainly active at night (from dusk till dawn), and rest during the day. They cross distances as long as 25 km per night. In some places they are diurnal and hunt mostly during twilight.

They have an amazing ability to climb, especially on trees. They are able to drag their prey on tree branches and hanging them there. They are also very good swimmers and fast runners. They also jump high as up to 3 m vertically, and over 6 m horizontally which all confirms that these animals are super athletes.

Leopards are solitary animals and associate with each other only during the mating season.

They are also very territorial, but they usually defend their territory against outside intruders. Females take care of their offspring even after weaning, and help them with food if they are not able to catch prey themselves.

These cats have a sophisticated way of communicating with each other, through different sounds, such as purrs, meows, growls, etc. The males often overlap territories with female territories, to enhance their access to the females. Females live with their offspring in territories which usually overlap.

The leopard has an acute sense of hearing and excellent vision which it uses as its advantage for hunting its prey. The leopards are carnivores, preying on medium sized prey living in small herds and in dense habitat. They avoid hunting prey living in open areas. Their prey is various, and includes more than 100 species.

The leopard hunting tactics consist of stalking the prey and trying to approach as close as possible, and then suddenly jumping and suffocating the prey. The leopard eats smaller prey immediately and it stashes the larger prey on trees, caves or bushes for later. The hiding places vary depending on the terrain.

These animals fight for food and territory with other predators in their habitats, such as lions, tigers, hyenas, bears, wild dogs, etc. Their offspring is also under attack. To survive they change the type of prey they hunt or they avoid territories inhabited by such predators.

When attacked, they could save themselves by climbing up a tree. Competition is less visible in habitats where there is sufficient food supply for all present species.

The pregnancy of female leopards usually lasts 3 – 3.5 months, and they give birth to 2 – 4 cubs, usually in a cave, among boulders, or in a hollow tree. Their mortality is high in the first year. The young remain with their mothers from 1.5 – 2 years.

Although leopards avoid humans, humans could become their prey.

What does the Leopard Symbolize?

The Meanings of Leopard as a Spirit Animal

The Leopard as a spirit animal can have many different meanings, and here are some of them:

Stealth. Leopards are known for their stealthy moving towards the potential prey. They are capable of approaching the prey at a distance of just 5 meters and then suddenly charging at the prey. Their stealthy moving ensures the success of their hunt. As a totem animal, the leopard teaches you of the benefits of being unseen and doing things you desire without others meddling in your business.

Instinct and intuition. Leopards use their instinct to hunt their prey and hide from predators. This totem animal is teaching you to rely on your gut feeling to know when to take action and what to do in certain situations. Trust your inner guidance to know the best path for you.

Adaptability. Leopards are highly adaptable animals. They survive in dry as well in wet lands of the rainforests. Because of those skills they possess, as your totem animal they teach you of the importance of being adaptable and adjusting to any circumstances you find yourself in.

You have the ability to overcome them so you can continue towards your goals.

Elegance and beauty. Leopards are considered one of the most beautiful animals on the planet. They have a graceful walk and a beautiful fur with unique patterns, which makes these wild cats, true mannequins of the wilderness. With the leopard as your spirit animal, you probably possess natural beauty and elegance.

You most likely have a taste for good clothes and you always look immaculate.

Dignity and pride. Leopards have a dignified posture. They look like true royalty with their precious fur and their graceful walk. These animals as your totem remind you to maintain your pride and your dignity in every situation you find yourself in.

Tactics. These wild cats are masters of tactics. They make plans to catch their prey and execute these plans with precision. A leopard totem animal teaches you of the importance of planning and having tactics in situations where you can’t improvise a lot.

Individuality and uniqueness. Each individual leopard has a unique pattern. That makes these animals very special. This totem animal teaches you to appreciate your uniqueness and individuality. You don’t have a duplicate in this world. You are a precious combination of influences and no one like you exists on this planet.

Don’t compare yourself to others and just enjoy the fact of being special just the way you are.

Camouflage. The leopard’s skin pattern enables it to camouflage well enough to hide from potential predators as well as to ensure a successful approaching towards a potential prey. A leopard totem animal teaches you that is sometimes better to do things unnoticed or without much attention.

Leopard as Your Totem Animal

With the leopard as your spirit animal, you probably have natural graceful moves and beautiful looks.

You are most likely very stylish and have a gift to style yourself to impress others.

Your personality and appearance amazes people. You are confident, elegant, dignified, and well aware of your personal power. You are often the center of attention in any group of people, regardless of the size.

This totem animal reminds you of the great power and abilities you possess.

You are most likely capable of accomplishing anything you desire. You are a well – respected person and you usually climb high on the social scale. You are driven by success and you probably have excellent communication skills.

You always maintain your graceful attitude, even in the presence of people who don’t deserve polite behavior. You are an independent person and you value a lot your personal freedom.

With the leopard as your totem, you are most likely a person who is very skilled in your profession. You easily solve problems and you have leader qualities. You also have survival skills.

Sometimes you can be egoistic and too self-absorbed. You can’t stand someone telling you what to do. In romantic relationships you need to have a partner who is your equal.

With this totem animal, your lesson might be of being more humble and less focused on yourself.

You are also very persistent and patiently wait to accomplish your desires and goals. You most likely plan your actions in advance. You respect others but you also respect and appreciate yourself. Your power is great but you use it wisely.

What if the Leopard Appears in Your Life?

The leopard appearing in your life is a reminder that good always comes after bad. After suffering, there is always a period of relaxing and renewal. The leopard appears to remind you of all your abilities and skills you possess, which can enable you to do or be anything you can imagine.

This spirit animal also reminds you of your uniqueness and specialty. Be aware of that and appreciate that fact. Love yourself and be confident about your abilities to achieve success.

Trust in the best possible outcomes and don’t be afraid to take action when you feel that it is the right moment. Use your strength and gifts to overcome any difficult situation you encounter.

When to call on Leopard?

You should call on Leopard as your spirit animal when:

Dreams about Leopard – Interpretation and Meaning

A leopard appearing in your dreams is a good sign, indicating the success of your endeavors. It also indicates overcoming obstacles through determination, patience and perseverance.

A caged leopard also indicates overcoming obstacles but in an almost effortless manner.

Killing a leopard could indicate being successful in some current projects. If the leopard had attacked you in the dream that might be an indication of being too confident in yourself and your abilities and overlooking some circumstances and obstacles you will need to deal with first. It might also indicate deceitful people from your surroundings.

If the leopard was attacking its prey in your dream that could indicate a possibility of someone close to you becoming ill and needing your help and care.

A dream about leopard could be a warning of a potential danger threatening you in some situation you are currently in, so you will need to be careful in the upcoming days.

If the leopard was following you in your dream, that could be a sign that something from your past is still bothering you and preventing you to move forwards with your life. This dream is a reminder to confront these issues and deal with them for good.

If you don’t do that they will continue haunting you and interfering with your future progress. If the leopard was chasing you, that could mean possible threats from someone.

If the leopard was resting in your dream, that could be an indication that you will need to change something regarding your career. It might indicate the need to stand up for yourself and don’t allow others to take credit for your work anymore.

Sometimes this dream could be an announcement of a promotion as a reward for your hard work and efforts.