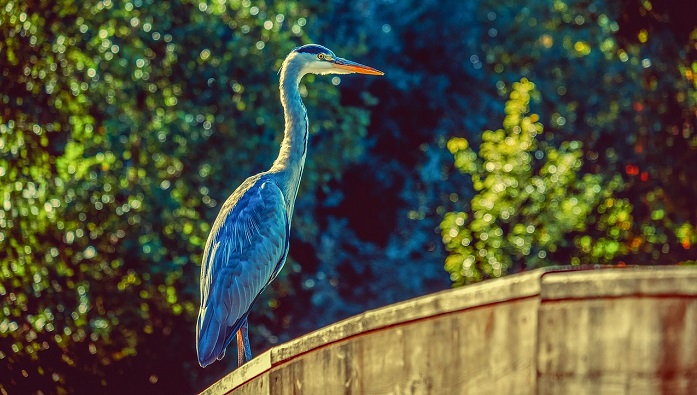 The blue heron, or the great blue heron, is a large wildfowl, living near wetlands and the shores of open waters throughout Central and North America up to Alaska, the Caribbean and the Galapagos Islands. They can sometimes be found in the Azores, in coastal Spain and far in southern Europe. In Florida, this bird is all white and is called the great white heron. It is still a question whether is a same bird or a separate species from the great blue heron.

The species living in colder climates are migratory, but they are known not to live their habitat even during winter times, if they have enough food.

These birds have beautiful feathers, a combination of grey and azure blue, and there is where the name came from. They are very adaptable and live in different wetland habitats, such as mangrove swamps, lake edges, shorelines, saltwater marshes, or flooded meadows.

They sometimes live in developed areas if the food supplies are plenty.

Blue herons don’t often distance themselves from water surfaces. They nest in trees or bushes near the water, and that is often on islands in the water or some isolated spots. That protects them from potential predators.

Their main food source is small fish, but they also feed on crabs, shrimps, aquatic insects, small mammals, rodents, reptiles, amphibians, and also birds, usually ducklings. Their diet of course varies depending on their habitat.

Herons usually swallow their prey, but sometimes they choke if the prey is too large for that.

They usually eat alone. They feed in water or land both during the day as well as night, mostly around dusk and down. The heron has different hunting techniques which vary, depending on the circumstances. They are skillful hunters. They can stand in one place for a long time and then move fast, they walk slowly or quickly, hover over the water, dive into the water, etc.

The blue herons breed in colonies. The adults return to their colonies after winter. Their colonies usually consist only of blue herons, but sometimes these birds nest along other species of herons and form special colonies called “heronry”. These colonies are large, and can range up to 500 nests per colony.

These colonies nest next to feeding spots. They choose the heronry sites so that predators wouldn’t be able to reach them. Herons love trees, but when they are not available, they could nest on the ground, cacti, beaver mounds, etc.

Herons often reuse old nests. They are monogamous during one breeding season, and they choose a new match the next year. Males come to the colonies first and they settle in a nest. 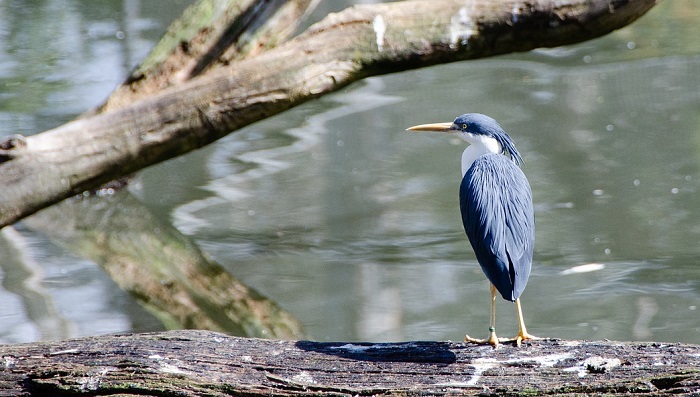 They usually choose a different nest every year. They court females there. The nests are bulky and made of sticks. They are usually around 50cm in size, but they can grow up to 120cm wide and 90 cm deep in time, due to the additional construction.

Herons have problems with their reproduction due to human intervention into nesting areas.

The eggs and the chicks get abandoned. The female lays up to six eggs pale blue in color.

They raise one brood per year. They are incubated by males as well, around 10.5 hours per day. Females incubate them for the rest of the day. The first hatched chicks are usually more experienced than the rest of its siblings.

The parents feed their chicks by regurgitating food. They need to eat four times more food during the period of feeding their chicks. The chicks slowly become used to the lives outside of their parents care. After leaving their nests, they keep coming back to be fed by their parents for another 3 weeks.

They also join their parents in their foraging. Gradually they become fully independent.

Adult herons don’t have many natural enemies. Some of them are the bald eagles, the golden eagle, owls, and hawks. In some cases, an alligator or a crocodile can attack on an adult heron.

Herons have scary looking bills and they can use them to cause severe damage to potential attackers.

What does a Heron, Blue Bird Symbolize?

The heron is a bird with various symbolism attached to it in different cultures. In Greek mythology, herons were messengers of the gods. In some Native American tribes, seeing a heron is a sign of good luck.

In Ancient Egypt, the heron was also considered a messenger from God. It was also a symbol of abundance and prosperity.

In Christianity, the herons are symbols of Christ’s sufferings. It was also a symbol of satisfaction and patience.

Fishermen in some areas believe their fishing trips will be successful if they see herons along the way.

Many people still believe that shooting a heron could bring them bad luck.

The Heron, Blue Bird Meaning as a Spirit Animal

The heron, blue bird totem can have many different meanings. Here are some of them:

Solitude and isolation. Although they gather in flocks, herons are solitary birds. If you have a heron as your totem animal, you are most likely a loner by nature. You do enjoy the company of your friends and family, but also enjoy spending time by yourself.

Longevity. Herons are symbols of longevity in many cultures. With heron as your totem, you are usually blessed with long and healthy life.

Good fortune. Herons are also considered a symbol of good fortune. You are certainly a lucky person if you have the heron as your spirit animal. This animal also announces a period of good fortune entering your life.

Independence. Young herons gradually become independent from their parents care. The heron teaches you of the need to be independent. Sometimes it is a reminder that you need to establish some boundaries to your life and privacy.

Good parenting. Herons are good parents, taking turns in providing for their young. If you have the heron as your totem animal, you are usually a loving and caring parent.

If the heron is your totem animal, you are truly an explorer and adventurer. You need to follow your heart’s desires to feel complete. You are independent and don’t let others put their noses in your affairs.

Although it doesn’t seem that way sometimes, you are very organized and balanced. You require time for yourself and your renewal.

You are determined to succeed and search for ways to do that. You don’t let minor setbacks and inconveniences along the way discourage you. You know there is a way to succeed; you just need to find it.

Having a heron as your totem animal makes you a unique and interesting individual.

Certainly nothing is ordinary about you. Maybe you are not as traditional, but you know what your responsibilities are and you tend to perform them with joy.

What if the Heron Appears in Your Life?

When the heron spirit animal appears in your life, it could be asking you to contemplate over your life and the things you have learned from your life experience. Its appearance could be preparing you for a transformation you are about to undergone and become more self-reliant and independent as a result.

This totem animal is asking you to be your own lord and follow the path you feel you should follow, instead of being a simple follower.

You need to follow your heart’s desires, even if it means that others will consider you different and sometimes a bit odd. Be true to yourself and you will be happy.

The heron totem could be a reminder to calm down and ground yourself. It is asking you to have faith in the perfect unfolding of things and circumstances in your favor.

You only need to dispose of negative beliefs and self-imposed blockages.

This beautiful bird could be reminding you to actively seek for new opportunities for your desired progress.

A heron appearing in your life could also symbolize a stroke of good luck you could soon experience.

When to call on Heron, Blue Bird?

You should call on heron as your spirit animal when:

Dreaming of herons can have many different meanings. They are a good dream symbol and indicate stability, confidence, self-reliance, nurturing and overall success.

If the heron was black, the dream could be a warning of not paying attention to the opportunities arising before you. This dream encourages you to take action and go after your dreams.

If the heron was bright blue, that dream could be a reminder to connect to others who can help you achieve your goals.

You need to openly speak about your desires and let others offer you their help. You cannot always do everything alone, so be grateful for the people you have in your life you can rely upon.

A white heron could be a sign of your developing spirituality. It might be a message from your spirit guides so you need to carefully analyze all the details of this dream.