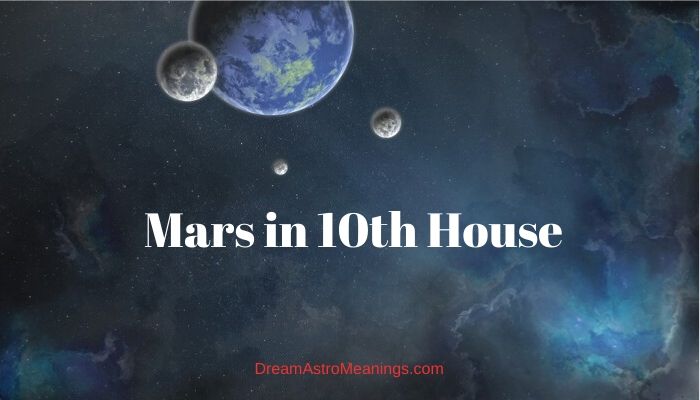 Planets inside astrological houses could reveal many important things about a native’s destiny and the attitude towards certain segments of life. Planets and aspects they form would affect a particular area of life, represented by an astrological house, in the most specific and unique way.

Sometimes we could hardly understand why this or that was happening to us and what should we do about it.

Planets in houses tell about potentials and opportunities regarding specific areas of our lives. Each house represents one segment of life.

The Tenth House in Astrology

The Tenth House is the house of success. This astrological field is primarily associated with career and one’s attitude towards work, jobs, career goals, ambitions regarding professional status and everything else related.

This field tells much about one’s attitude towards professional status and professional success, so it is very important to understand the planets inhabiting this field. We have a competitive Mars in here, so we shall see later on how it affects this area of life.

Since finances and professional segment of life seem one of the cornerstones of the world as we know it, it is very useful to know where you stand.

Individual stories could be very different, of course, and what this field reveals is not actually a recipe for success. However, it reveals your potentials, which could be of great use. Everything else is up to you.

You have very likely heard stories about people who became stars and successful in their area of interest, not to mentioned who got to earn unbelievable amounts of money, starting from zero, from literally nothing. They had enough courage and willingness to pursue their dreams.

The Tenth House could tell if there was a potential for success. On the other hand, you have people who have lost everything, due to a lack of willingness to maintain it or whatever else.

Some people are said to have been born under a lucky star, meaning they had a good starting point in life.

However, what it actually matters is your attitude and not what you have been given; ok, at least it is not the only important thing.

If you would like to know about your outlooks regarding career, profession and else, search for a lucky start in the Tenth House. It could tell about favorable circumstances and vice versa, about good opportunities and else.

For example, the Tenth House could indicate certain actions one should take, even though if it seems those have nothing to do with the native’s goals. Sometimes we should do something that seems non-important, in order to achieve great things.

This house could also help in registering potential disaster, troubles, rivals, enemies and various obstacles that block your road to success.

Capricorn is known for being very down to earth, diligent, stable, hardworking and responsible. These qualities are needed for success.

Mars was an ancient deity of war, worshiped throughout the Roman states, but also by Sabines, Etruscans and others. In Greek mythology, Mars was known as Ares, but Greeks did not favor their war god.

The reason for difference in attitude is that the Roman god was considered a more tactful, more reasonable and subtler deity and also common folk, peasants, worshipped him as an agricultural deity. It was as common combination in Rome; dual attributes and purpose of gods.

However, in Greece, Ares was not as loved and he was to be avoided. Greeks believed that even Ares’ Olympian relatives did not like him; he was violent, cruel, bloodthirsty, combat seeking, fierce and very impulsive deity.

Ares was associated with war, battlefield, injuries, bloodshed, conflict, fight, blood and death. Beautiful Aphrodite was the only one to soften his cruel heart and make him fall in love with her.

In Rome, however, Mars was adored and many shrines were built in his name. He was believed to bring victory and fortune in war campaigns, but he was not considered raging and wild, as Ares was.

Mars was a true warlord, a leader, a tactful commander, a god protector and a guide in matters of war. Romans, who are known to have been a war state, were much in favor of him.

On the other hand, as we have mentioned, Roman folk loved Mars and took him for an agricultural deity, which is always a good thing.

He was associated with all the agricultural and cattle breeding works and so people throughout Rome held many festivities in the name of Mars. The oldest shrine dedicated to this god was built on Mars’ field, outside of the city of Rome.

Mars was most commonly portrayed as a fit, handsome, beautiful male in his prime strength; on rare occasions as an older bearded man, though equally fit and strong. Ares was depicted the same way. This god represented masculinity in all its beauty.

Mars was, we daresay, an apotheosis of male beauty and strength. Just look at some of the statues portraying Mars or Ares and you will see it for yourself.

Mars in Astrology – Planets in Houses

In astrology, planet Mars bears many characteristics of these gods, although it is not always fortunate comparing astrological planets and deities whose names the planets carry. Well, in case of Mars, there are many similarities.

First, Mars irresistibly reminds of the bloodthirsty Ares, since the red planet is also known as the ‘bloody planet’. Mars is a malefic planet.

This bold planet rules two of the most powerful signs within the Zodiac, fiery, impulsive Aries and enigmatically powerful Scorpio.

The planet Mars is an embodiment of the masculine principle and, as such, associated with young males, with sports and sportspersons, with warriors, soldiers, generals, but also with engineers, mechanics, surgeons, blacksmiths and others. All the acute injuries are associated with the impulsive Mars.

Mars acts on the impulsive and does not mind being physically hurt; therefore, it is also the planet of the incredible strength and of regeneration. Mars would hurt you, perhaps, but it gives you an unbelievable power of healing.

Although Mars is one of the malefic planets, it does not mean its influence has to be malicious. Well, no planet should be understood as ultimately good or entirely bad.

Mars gives you courage, strength, bravery, ambition; it drives you towards your goals, because Mars dreams of victory.

If you are wise enough to recognize its positive potential, you will be able to achieve amazing and noble things in life. Mars may be a brute, but its energy could be used for good things!

Of course, the way Mars would manifest in one’s natal chart depends on the precise position of the planet, of the house it inhabits and of aspects it forms with other planets in a natal chart.

Mars is the last of the personal planets, so it tells much about one’s temperament, character and attitude towards life. Mars also plays an important role when it comes to love life, since it is tightly associated with its physical aspects.

Mars in the Tenth House – Mars in 10th House

Courageous and competitive, Mars sits in the field of career and success and drives you towards your goals. Of course, it is necessary that it creates favorable aspects.

People with such position of Mars are very energetic, lively, active and driven towards their goals. They aim for heights, for their standards are very high and their goals ambitious.

What is very important to note is that these people are willing to work hard, they are not easily discouraged and they remain passionate about what they would like to accomplish. Finding balance would be a problem.

Mars in the Tenth House indicates a needy and very demanding personality, one who is self-sufficient, self-confident and often very proud.

People with such position of Mars are authoritarian, domineering and, being such, they hate being commanded or even only told to do this or that. They have problem with authorities, which is something that must be noted.

These people have an incredibly big ego and they are achievers, leaders, not followers. In addition, they are very talented and skillful, so they would seek for an opportunity to express their gifts.

Once they discover what they truly desire and set their goals, it seems that nothing could stop them. They are not afraid of working hard; they do not mind sweat and pain, if it leads them to the top.

They are very competitive; they enjoy challenges and they would play fair. They are very bossy and commanding, but it is much more than just a pose. They are gifted in such things; a Tenth House Mars would make for a demanding leader, but a righteous one.

Although they would never let anyone bring their position and personality into question, they could be very charismatic and, as such, they could inspire others to follow their own dreams.

Mars in the Tenth House people are those who would not give up easily. They could be unbelievably stubborn when it comes to their passions and goals, which could be of use in many situations.

They simply want to be a number one in their field of interest. They are highly motivated, energetic, ready to work hard and not afraid of failure. Their reputation is golden and they would like to maintain it.

They care much about how they look within the society and they would never wear others’ feathers. These people are honest, just and noble rivals.

Everything they have achieved they did by their own hands. They are honorable and, thus, highly admired by other people, even if their attitude could sometimes be very arrogant, too self-proud and too authoritarian.

What is more, they are pragmatic. With Mars, everything remains within the domain of material, visible and tangible.

These people set their goals and then look into the strategy to achieve them. They are tactful strategist on a battlefield. They fight with honor and thoughtfully, even though Mars is known for being impulsive.

It could happen, as well, depending on aspects. They could be foolishly daring, at times, though generally they are not like that.

These people have a very practical view on life. They would not waste time fantasizing about unreachable goals and visions.

They have already set very high goals; they would plan and organize the journey to get there. They could be flexible in the most practical way; if one path proves unsuccessful, they would pave a new one.

However, they could sometimes be very stubborn, before they choose another way.

They are executive and professional, when it comes to working environment, especially if they were the boss (well, they would see to become one). Their attitude towards their employees is just, strict, dominant and demanding and very honest.

If working on a team, they would be the ones to take the initiative, to suggest rather bold solutions and to lead others.

People with Mars in the Tenth House are not exactly afraid of failure, but they hate losing. Literally, they hate it, because they think they have to be the best. If they were not, it annoys them more than other representatives of the zodiac.

As Mars was a fiery, competitive and combatant planet, they could even become furious. They are quick tempered, but they would also quickly cool down and start anew. They would not let despair take over.

They would not stop if faced with a problem, an obstacle, people who would like to see them fail. On the contrary, it would drive them towards reaching their goals even more.

These natives enjoy challenges, they test their limits, they always strive for being better than they were yesterday and it all applies onto their career goals and their professional life. Mars in the Tenth House indicates a boss, a leader and a victor.