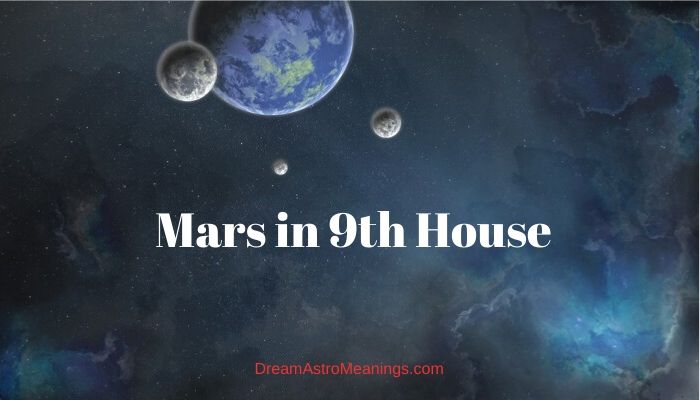 Mars was an ancient deity in Rome. He was worshiped as a warfare deity, but also as a god of agriculture. His counterpart was the Greek god of war, bloodthirsty Ares.

Although Mars and Ares were both war deities, they were not perceived the same way, by these two majestic ancient civilizations.

The planet Mars in astrology is sometimes closer to Ares and at other times, to Mars. Mars is powerful, both destructive and actively constructive.

The houses are very important element in each astrological chart reading. Planets in astrological houses affect our life in a specific way.

As each house corresponds with a particular field of life, planets inside them, forming aspects, shape up our experience of these areas.

The Ninth House in Astrology

The Ninth House is a particularly interesting astrological field. It is associated with ethics, morality, philosophy, virtue and wisdom. It also has to do with spirituality and astrology, religion, beliefs, faith and everything related to these concepts.

The Ninth House is largely about learning, education, especially higher education. This is the field associated with self-development, growth and one’s ability to influence a larger audience, possibly through a written word.

This astrological field is considered an auspicious one, since it is associated with all kinds of success. It is a hallway that leads to the tenth field, which is the field of professional success.

We could say that the ninth field prepares you for the next stage, in that sense. This is the field of education; the education that would help you eventually achieve success.

Therefore, this house is about your potential for achieving success through self-development that comes with learning.

When we say learning, we primarily focus on religious, philosophical, ethical matters and questions of morality.

This house is associated with ones willingness and desire to learn, so if you have a favorably positioned planet within this field, you will easily find amazing opportunities to learn, grow and enrich your knowledge.

The Ninth House especially has to do with foreigners and foreign countries.

It reveals one’s potential to establish some really good, stable and useful connections with foreign people.

For example, this field indicates some kind of business or deals associated with export and import, trade in general.

People with an emphasis in the Ninth House are likely to affect many people around them; they could be socially influential. For example, they could write striking journalistic columns or something of the sort.

In any case, this is the house associated with fortune and success. Another element of this house is marriage, but not the first one. This house indicates a second marriage, usually one that comes after a divorce. It also indicates divorce.

This house is one of the cadent houses and cadent houses are associated with everything that comes before concrete actions, which follow in the angular, cardinal houses.

The Ninth House is a Fire house and analog with the fiery and energetic sign of Sagittarius. In that sense, the ninth field indicates movement, exploration, curiosity, enthusiasm and the drive that never ceases.

People with an ‘activated’ Ninth House, so to say, are open towards the world, willing to learn more from it and about it, in order to build up their knowledge and grow, spiritually, intellectually, ethically and morally in the first place.

Mars is the second most important Italic and Roman deity, besides the mighty Jupiter. Mars has been worshiped throughout ancient Italy and he had many names, some of which you have probably never heard of.

Etruscans worshiped this god, just as Sabines and others. Mars was most widely considered the god of warfare, according to the official cult, while peasants and common folk also considered his the deity of agriculture and cattle breeding.

It was believed that Mars rules over fertile soil and fields, and also the battlefields, people would pray to this deity to protect the land from the invaders and enemies and from all the natural disasters.

Mars was, thus, considered a god of prosperity, progress and abundance, both in the agricultural sense, but also in sense of the matters of Roman state and nation.

The oldest shrine dedicated to Mars lies out of Rome, on the Mars field. According to tradition, the legendary king Numa built an altar to Mars.

At this place, the rituals of consecration of weapons to Mars would take place, as well as the purification ceremony, lustrum.

Symbols of Mars were the sacred spear, hastae Martis, and sacred shields, ancilia. Animals associated with Mars were wolves, bulls and woodpeckers.

Mars was much admired deity; the emperor Augustus built two temples in Mars’ name. Mars was worshiped throughout the Roman state, in all the provinces of Rome, especially in Gaul and Germania.

It was common to find local deities named after Mars. Mars was most commonly depicted as a fit, muscular, nude male, with a helmet, spear and a sword.

The same portrayal applies to the Greek counterpart, Ares. However, unlike Mars, Ares, the Greek god of war, was not much admired by the people of Hellas.

Ares was said to be a violent, aggressive, bloodthirsty god whom even his Olympian relatives did not love. Ares was a god of bloodshed, injuries, combat, fight, battlefields, war and death.

Mars was considered a deity that is far more refined and associated with agriculture, which is a very important fact.

Mars in Astrology – Planets in Houses

However, talking about the planet Mars, we get much closer to Ares of the Greeks.

Mars is a malefic astrological planet. Mars is called the ‘bloody star’, since it is associated with combat, fight, conflict, trouble, injury, aggression and raw strength.

Mars is the planet of masculine principle, ruling some of the strongest and the most powerful zodiac signs, those of Ares and Scorpio. Mars awakens one’s combatant and fighting spirit.

Mars is a warrior, just as Ares. Its energy could be cruel, merciless and very raw. However, Mars could also be like the Roman god; this planets moves us, it gives us strength and it makes us active, self-confident and brave, courageous; sometimes foolishly, though.

People who are ruled by this planet are impulsive, quick tempered, impatient, strong and active.

Therefore, Mars in good aspects could be amazing; it could give you strength and courage to achieve whatever you like.

On the other hand, it could be unbelievably destructive and self-destructive. However, its destructiveness comes with the amazing ability of regeneration.

Therefore, Mars is associated with not only warriors, soldiers and sportspersons, but also with healers and surgeons. Mars corresponds to the angel Samael, who is the angel of death.

Samael is, indeed, the angel of death and destruction, but he also gives people strength to endure the hardest times and defeat the enemies. Mars, the red planet, should never be taken for granted.

It is very important to learn about its position and aspects it forms. It plays an inevitable role in our lives, being the last of the personal planets. We shall see how it corresponds with the Ninth House.

Mars in the Ninth House – Mars in 9th House

Mars in the ninth House is a position that combines enthusiasm and intellect. Could it be better?

Well, this combination makes the native eager to widen and deepen their knowledge in every single sense. This native is extremely curious and daring, a free spirited individual with eyes and ears wide open.

However, there is more to it. These people are not interested into simply being informed about this or that.

No, they want to learn, as they believe it would move them ahead in life. Which is true, we have to agree. Through their intellectual pursuits, they natives grow wiser, braver, even more self-confident and rich from within, in the first place.

They are extremely dedicated to their pursuits; they do not mind difficult conditions and hard work at all. They are fanatic, in a way, zealous and passionate about whatever they were up to.

These natives are impressively energetic. It seems that they do not even sleep, since they are always on the run. Their minds are widely open and so is their body active. These people would cross distances only to learn something they were interested into.

Although they do not necessarily require being materially present at the place, they enjoy it. It enriches their vivid imagination and an incredibly sharp mind even more.

Their mind is turned towards progress and they usually have their own idea and vision of what the progress might be. They are lively, open, very easy to talk to, funny and attractive, but they are also quick tempered and impulsive, so do not tease them.

They are very competitive and they hate when someone tries to impose opinions on them. Well, they would very likely reject those, before even hearing them.

This is one of their paradoxes. While being open-minded and willing to learn everything, they have a problem with others’ ideas, if they see those as a threat.

So, they would discuss whatever you like, but only if you do not try to impose your opinion on them.

They would fight back, ignore you or simply discard what you are saying as nonsense. They could become too self-righteous and know-it-all type of people.

However, their openness always prevails. They enjoy exploring options, theories, ideas, even if those were in contrast or being paradoxical.

They are also very open to learn about different people, different cultures and so they do like traveling. They are usually very active and their pursuit for knowledge could be a real quest, a mission they are passionate about.

These people would gladly learn foreign languages, participate in foreign traditions, in order to learn more about the world, the people living in it and, most importantly, about themselves.

What is truly fascinating about these people is their daring spirit, when it comes to widening horizons and learning new things.

They would not hesitate if they get an opportunity to visit a remote location, even if it was space! They are ready to take a risk, because they see how many roads there were in the world and each road leads to a lecture.

Every place they visit, every contact they make help them grow and discover more about themselves.

A native with Mars in the Ninth House would gladly opt for a career that includes exploration and high education; they could become archaeologists, historians, anthropologists, biologists and else.

Anything that requires a thorough study, but also different locations, would be a perfect job.

Needless to say, their job is also a quest, an enigma to be resolved, a lecture to learn and to teach.

These spirited and enthusiastic explores on the quest for knowledge are typically authoritarian type of people.

While they could be amazing lecturers, their attitude is very authoritarian. They could be a head of the exploration team, leaders on the project or so.

They like giving orders and feel very good doing so. As expected, they hate being ordered to do things. They will do it, their own way, whenever they see fit.

They are extremely self-confident when it comes to conclusions they have made, opinions they have formed, convictions, beliefs and all else. They would rather impose their own opines on others, they bend towards another’s. They have a power of persuasion and they are rarely in the wrong.

Although Mars ruled people are impatient and impulsive, these intellectual ones tend to be a bit more tactful.

This makes them amazingly successful in their ways. They are strategic warriors, more like the Roman Mars than Greek Ares.

They know how to organize their knowledge and give wise advices to people (although those would sound like orders, rather than advices). They could inspire others and also encourage other people to pursue their own dreams.