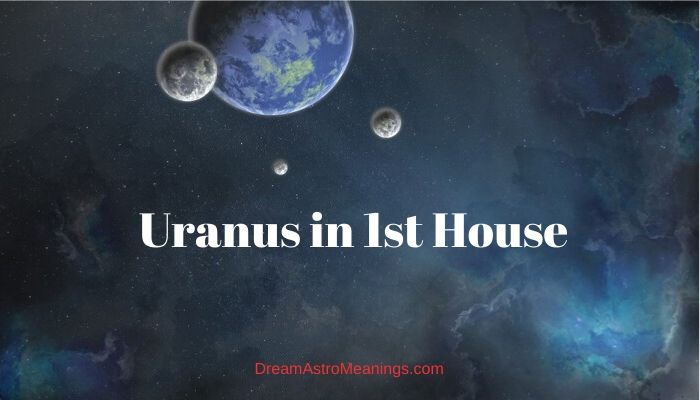 Uranus is quite a fascinating planet, from the astrological point of view. A ‘new’ planet, Uranus is responsible for all the novelty and radical changes.

This is the planet of rebellion and revolution, of genius and of a visionary, of freedom of thought, but also of unity around the revolutionary idea. Uranus rules the sign of Aquarius, well-known eccentric visionary of the Zodiac.

The First House in Astrology

The First House is typically considered the most important astrological house, since this is the house related to your personality core, so to say, and also your reputation, yourself in the world, as you are.

It is the house of identity, personal principles and convictions, beliefs, the attitude towards life, personal strength and will, self-confidence, self-esteem, self-integrity, but also the physical appearance, yourself in the eyes of others.

The way you are going to present yourself to the world is associated with the First House.

Therefore, the First House is about who you are, within and in the world. This house is associated with your predispositions for success in life, with everything that has been given upon the birth of a native.

This astrological field is associated with the circumstances of one’s birth, as well.

It is associated with beginnings, with moving forces, with vitality and longevity. This is the house that shapes up one’s temperament, character and attitude; the field of the native’s behavior and habits.

It is of essential importance carefully to explore your First House, when reading the natal chart of yours. It is very important to know which planets could be found there and what kind of aspects they create.

People who have more planets in the First House are typically egocentric. They are usually focused on themselves and it is not necessarily a bad thing, as you might think. It depends on the aspects.

If those planets were favorably positioned, they would give a generous, brave, splendid personality, worth of admiration, respect and love.

These people are amazing leaders, charismatic ones, who inspire others and awake the best in you.

These people are enthusiasts, natural born leaders and great optimists. They possess incredibly strong motivational energy and spirit. They emit good vibes, they are open, friendly, dynamic, temperamental and they are people of action.

If planets in the First House were not in such a favorable position, it could happen they become arrogant, too self-centered, self-proud, disdainful and else.

It could also happen that they lack everything that would make them strong; the coin could be flipped in a bad way, so they lack self-confidence and personal strength.

In any case, it is very important to know which planets are to be found in your first field and how those affect this specific area of life, your true identity.

The First House is one of the angular and a Fire house, analog with the sign of fiery Aries.

Uranus was one of the primordial deities in Greek mythology. He was the son and the husband of Gaea, the Earth, who gave him birth without a partner. Uranus and Gaea were parents of titans.

However, there are different versions of Uranus origins. In his work De natura deorum, Cicero claims Uranus was a son of Aether, the god of the upper sky, and Hemera, the goddess of the daytime. Orphic hymns, however, claim he was a son of Nyx, the Night.

In any case, Uranus was the primordial god of the sky and his name means the sky. He, as other gods mentioned here, was more of a personification, than a deity as one of the Olympian gods, for instance.

He was anthropomorphized only in the myth of castration; according to the myth, his offspring, Cronus the titan, Saturn in Roman version, overthrew and castrated him. Uranus hated all the children Gaea has given, so he imprisoned them.

Gaea herself demanded of her children to overthrow and castrate Uranus. From the foam that has formed around his cut off parts, Aphrodite, the goddess of love beauty was born.

While the myth of Uranus is interesting, perhaps the planet Uranus, as understood in astrology is even more fascinating.

First of all, this planet is one of the ‘new’ ones, since it was not known to humans until the nineteenth century.

We could safely say that Uranus has pulled us over the border, took us beyond Saturn, as traditional astrology knew no planets beyond Saturn’s point; it relied only on the known, visible planets.

Some authors identify Uranus the discovery of the planet with the awakening of human consciousness, with the age of inventions, ingenious ideas, progress, technology and else.

After the discovery of Uranus, two more of the new planets followed, Neptune and Pluto.

Together, the three make a group of transcendental planets in astrology. Uranus represents the change, the discovery, the novelty, the shock, human genius. It acts on a whim, so to say, it is impulsive and Uranus effects are as such.

Uranus is a revolutionary planet and it is said that some of the greatest revolutionary events in the history have happened under the influence of Uranus.

Uranus is the planet of freedom and liberty, while, at the same time, it tends to unify people. Uranus wants to gather them under the ingenious ideas that lead to progress.

Uranus unifies masses and causes rebellions, revolutionary movements, but also revolutionary inventions, discoveries and such. We could say that it gives brilliant individuals, but it also gives unstoppable masses that tend to transform the world.

This is the planet of change and of visionary outlook; hence this planet rules the sign of Aquarius. Everything that Uranus does is happening here and now, while looking into the future.

People who are under its influence, meaning those who have an emphasis on Uranus in their natal charts, are usually eccentric, odd, in a way, ingenious or even insane. It depends, we guess. This planet could give fascinating minds, but also complete lunatics.

People who are influenced by this planet are often interested into the occult, metaphysics and psychology; they also tend to dedicate themselves to, so to say, unusual occupations and life paths. They stand out of the mass.

In a natal chart, Uranus would have not much influence, unless it forms a strong aspect with other planets, especially with personal ones.

However, Uranus could still affect the life of an individual, many astrologers would say. Well, each planet in a natal chart plays a unique role.

The combination of aspects, planetary positions and else creates your uniquely special astrological profile. Let us see into one specific position of Uranus.

Uranus in the First House – Uranus in 1st House

Uranus in the First House indicates a free spirit, a visionary person, guided by amazing, ingenious, brilliant ideas; in some cases, futuristic ones.

People with Uranus in the first field are those a step ahead of the time they live in, especially if Uranus forms strong aspects with some other planets.

These people are very independent and they need their liberties. They praise liberty above everything else. These people would not allow anyone or anything to limit their freedoms.

When Uranus forms favorable aspects, it gives individuals of brilliant minds, great innovators, people of high intellectual potentials, those whose minds wander widely. They look into the future and are herald of progress, reformation, revolution in any sense.

For example, they could be brilliant inventors, whose ingenious inventions and discoveries could have impact on the whole humanity and the life as we know it.

On the other hand, if aspects were not as favorable, a native becomes foolish, thoughtless, acting on a whim, but rarely in a good way. Such people are highly unreliable, unpredictable, nervous and insecure.

These people often neglect their closest ones, engage with risky situations and especially risky business.

In general, those ruled by Uranus are, indeed, more interested into to humanity on the whole, rather than into an individual.

People born with Uranus in the First House usually stand out of the mainstream, one way or another, but their physical appearance is often the first thing that would draw your attention.

They love being unique, meaning they like to stand out, meaning further that it is a natural thing for a Uranus person. They would wear eccentric clothing or jewelry, a striking hairstyle or hair color or something like that.

They are natural born rebels and they like to shock their surrounding; these people are not afraid to show who they are and what they stand for, although they could cross the border of what is considered socially acceptable. Well, they do not really care about that.

They bring change. They want to reform the society.  These people would like to leave a mark on the world.

People with Uranus in the First House are very interesting individuals, in the eyes of many. They are very intelligent and interested into exploring all kinds of possibilities and ideas.

They are always in search of something new. It is a mission; they, in fact, want to create something new. Their spirit is rebellious; they believe the old order should be taken down, so that something new may step in.

It is very interesting to note that people who have Uranus in the First House are, indeed, in love with freedom and their individuality. They have a spirit of a revolutionary; they are people with a vision.

They could be extremely charismatic and inspiring figures. They want to influence masses, they want to awake the spirit of change, revolution and reformation in others. They believe it was their great purpose.

As such, they often do not think of themselves especially high; they simply believe they were born to be like that. Everything they do is unique.

These people invent their own ways of doing things, but what they really want to do is to move the world, to move humanity towards a better tomorrow. These people are idealists and great optimists.

In addition, people with Uranus in the First House are usually very self-confident, if the aspects were good. They would not think twice about their ingenious ideas and making decisions based upon them.

These people efficiently deal with any new, shocking and unusual situation. They are interested into everything ‘unusual’ about the people and the world. Their thought wanders beyond common and mainstream.