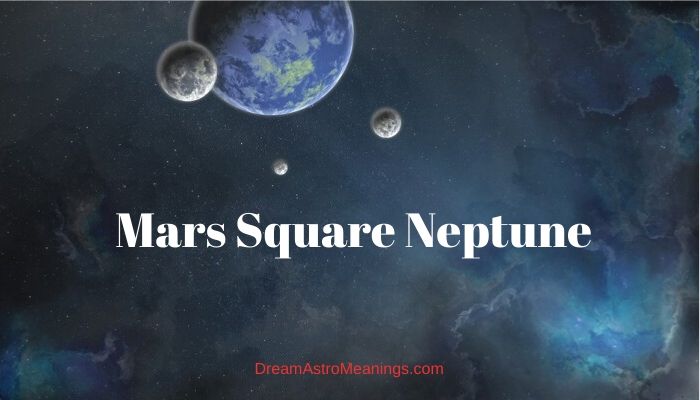 Mars square Neptune aspect in synastry is an intriguing subject. Astrological aspects tell us many things about our own character and personality and play an important role in our relations with other people.

According to astrology, planetary movement affects not only the existence as a whole, but also the microcosm that is a human being as an individual.

Astrology could possibly offer us answers no exact science could. It is interesting to note that, in the modern day, it seems that old lore and antique practices, mixed with spiritual beliefs, seem once again are getting closer to the official science. Astrology is a very old discipline, the science of the stars.

What mostly interests us here is comparative astrology, though we first have to know about natal astrology. Natal astrology creates, to say, personal horoscopes that are incredible complexes of information, something far more than simply one’s ruling zodiac sign.

A natal chart is a complex diagram that represents planetary position at one exact moment in time, your birthday. According to astrology, planets affect each one of us, and personally.

The position of planets, the aspects they create amongst themselves, their distribution over a natal chart all affect one individual as a unique personality.

If one would be doing synastry, he or she has to know how natal chart ‘works’. Natal chart represents our individual potentials; it is not your destiny prediction.

One cannot look into a birth chart and claim things are going to happen exactly as the stars say.

Nothing that could be seen in a natal chart represents a rule or a law.

First, stars do not say that; stars, planets, give us an imagery of potentials. For example, someone could have this or that planet in that particular natal chart house and it could say that person should probably be lucky in terms of finances.

It does not mean money would fall from the sky, but that it is something that person should focus on and use that ‘luck’.

First things first, what is synastry? Synastry represents the study of people’s birth charts in comparison to one another, in order to figure out what are the odds for their compatibility.

People are mostly interested into getting a synastry report about their (potential) relationship. In short, synastry shows how two natal charts interact.

It is a complex study that requires great insight into astrology as a whole. The first step is analyzing individuals’ birth charts separately, in order to see where they stand in terms of a relationship, the idea of a relationship, love, marriage, family et cetera. Once the separate charts have been analyzed, one could compare them.

The most important thing not to forget here is that synastry cannot be used as a prediction, since it is not a prediction, but an insight into potentials, just as natal charts are.

The synastry reports would reveal the possible good sides, bad sides, favorable ones, troublesome areas and more. Learning about troublesome points could be particularly useful.

Once you realize which areas of the relationship could be a clashing point, you could take it as a challenge. Knowing about them makes it easier to understand them and overcome them.

In any case, the synastry should not be something to take as written in the starts literally, but as an astral guidebook.

In synastry, the astrologer analyzes inter aspects created between the charts. These aspects reveal the possible nature of such a relationship and give you both an insight into the direction it could develop.

There could be troubling and favorable aspects and each planet involved would play its role. Do not let the bad aspects discourage you, but take them as a challenge.

Mars in Mythology and Astrology – The Importance in Synastry

According to Greek mythology, Ares (Roman Mars) was the god of war, son of the mighty Zeus and Goddess Hera. It is interesting to note that Ares was not celebrated in antiquity as some other gods were.

Because of his temperamental nature, his impulsiveness, his bloodthirsty and combatant spirit, even other gods did not powerful and aggressive Ares.

The only deity that could soothe Ares’ fiery nature was Aphrodite (Venus) with whom Ares had many children.

Although it is not always fitting to talk about the mythological background of astrological planets, since their meanings are older than the myths, sometimes the symbolism and understanding of planetary energies are intermingled.

The connection between Ares and Aphrodite is important, since in astrology the planet Venus is the only one to soften the planet Mars’ aggressive nature. Mars represents many things in astrology.

It is the third personal planet, very powerful. Its quality is dry and warm and it releases tense forces. Mars represents the need to conquer, expand, win and consume.

Mars is a fiery planet, in terms of its symbolism. Mars is masculine, beautiful, strong, combatant, aggressive, active, direct and potent. Mars represents everything that burns and happens instantly.

In the planet Mars we could see all of our ambitions and our active, moving energy, our need to shine somewhere, to show off, though only through deserved fame, and prove our quality, to leave a mark.

Depending on the position of Mars in one’s chart, ambitions could be too strong that the person becomes too impulsive and breaks down eventually. Mars inspires risks, daring spirit and deeds of dauntless courage.

The planet Mars awakens in a person competitive spirit, awakens the raw energy from within, it is not a planet you want to have in bad aspects. Mars is associated with conflicts, arguments, confrontation, war, battle, all in the widest sense. Mars rules two temperamental signs, fiery Aries and powerful mysterious Scorpio.

Since Mars is associated with warfare and injuries, it is also associated with healing and vitality. It strengthens the body part associated with its position in a natal chart, since it also puts us in the first row in an argument and exposes us to damage.

How would Mars behave in an unfavorable aspect with Neptune? We shall see.

Mysterious, distant, airy and watery at the same time, Neptune remains one of the mysteries of astrology. The influence of this planet is so difficult to characterize.

In mythology, Neptune or Poseidon was the god of the sea; the ruler of all water spaces, in fact. He was believed to be an unpredictable and affective deity, responsible for earthquakes.

In astrology, Neptune has a very mysterious nature. Perhaps the violent temperament of the ancient could be reflected in the unpredictability of water.

However, the astrological planet Neptune is associated more with what we could associate with uninvestigated depths of the ocean. Neptune is mystical, confusing, dreamlike, the planet of illusions.

Although it is one of the transcendental planets and very distant, many believe it does not play a very important role in natal charts or any of personal astrological analyzes. However, it is not entirely true.

The thing is, Neptune is tricky in its core; its influence is always hidden, disguised, alluring, though uncatchable.

Although Neptune is associated with imaginary realm, fancies and fantasies, poetry, dreamland, arts and creativity, its influence is not that of the imaginative and emotional Moon, nor that of the artistic Venus.

We could probably say Neptune embodies the inspiration itself, always changing, raising us to heights and leading us through uninvestigated depths.

Everything concerning Neptune is otherworldly, addictive, an illusion that is real, to say. Neptune rules our irrational self. We could compare it to Jupiter and say Jupiter was a philosopher and Neptune was a mystic. Neptune follows the purest form of love and devotion.

The sweetest dream and that indescribable place between reality and imagination is Neptune’s safe harbor.

Square is a heavy aspect that should lead to awakening conscience. Square represents challenges, lack of understanding, inability to make compromises, all internal limitations, restrictions and conflicts and projected ones.

It is a challenging aspect, but it is in itself active, although it does not allow energies between planets to flow free.

The square aspect primarily represents tension and it calls on action in the direction to relieve the tension.

Some astrologers characterize the aspect of square as having Saturn’s nature, being associated with restrictions and renunciations.

Square aspect does not develop conscious in itself; it moves us towards awakening it.

One could assume marc square Neptune could be a very intensive connection, having in mind the contrasting characteristics of these two planets and the fact that we look into them in synastry.

This is a seductive combination, an inspired romance, almost like in a fantasy novel about chivalrous knights and fair ladies, but it could be equally fatalistic and lead to obsessions and addictions.

We could say that this connection brings the risk of becoming the victim of one’s own savior attitude.

Mars could get easily attracted, allured and seduced by the mysterious, elusive Neptune Mars wants the forbidden fruit and Neptune is the master of such hidden, mysterious delicacies. Mars enjoys challenge, chase and hunt. Neptune is often untamable, uncatchable, challenging to courageous Mars.

When in the square aspect in synastry, conflicting moments may occur, not surprising at all, considering how different those were one from another. The thing is that Mars is a motivator, an active, energetic one, very straightforward.

The problem occurs when Mars tries to impose his or hers own motivation on Neptune who enjoys the dreamland. Neptune person may feel forced, attacked even by Mars person and would love to sneak out. This could lead to lies, trickery and deception.

Mars could take it as a self-failure, a lost battle and could be angry and hurt. Neptune could also grow to dislike Mars because of the imposing attitude.

Mars square Neptune could develop to a passive aggressive relationship. It could be extremely burdening relationship one could even wonder how it started anyway. It happens often that a Neptune person mislead Mars, usually in order not to hurt Mars’ feelings.

The problem is that white lies often grow to big ones and explode.

Neptune is the one to lie to Mars, either because of protecting themselves or because he or she does not want to experience mar’ anger or does not want to hurt them. However, Mars would deceive Neptune as well.

Mars would often fake he or she cares about certain Neptune’s concerns, out of good intention or because Mars simply cannot understand them.

When these lies pile up, you could only imagine the outcome. The roots of so much dishonesty in Mars square Neptune relationship usually comes out of benevolent intentions, but how devastating it could be!

If you manage to be honest, direct and open to one another, you may, in time, nurture the connection in a good direction.

Of course, many other aspects we do not know about here would affect the relationship as a whole. The square aspect is challenging, because it does not allow these two to understand each other very well and actually cooperate.

However, the key to this aspect is to try as hard as you need to remind yourselves of the importance of mutual honesty.

Mars square Neptune is a game of deceit and lust, a passive aggressive game that could lead to hurt feelings and victims on both sides.

However, now when you understand the meaning behind this aspect, you probably have a better picture on why certain things do not go smoothly and it could help you both work on them.