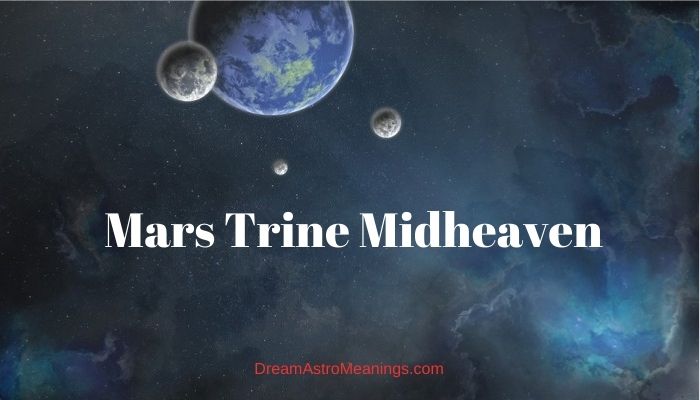 Thanks to the Midheaven, a person understands the meaning of his destiny, and also narrows down the field of professions in which he is able to succeed.

Here it is important to look not only at the zodiac sign of the 10th house and planet on the MC, but also to decipher the aspects correctly.

Sextile softens blows and attracts opportunities for the manifestation of talents in good circumstances in front of the right people.

It is not permanent, but it turns on when the native is determined to achieve a goal corresponding to the elements of the participating planets.

Mars in a positive sense is a symbol of a noble warrior who protects the weak and fights for justice.

The combination of assertiveness, hard work and obvious charm helps you advance your career and attract loyal supporters. Interestingly, your own home becomes the source of vigorous activity.

The favorable aspect of Mars in this case gives protection from the authorities and leaders of any rank. The misdeeds and mistakes of the owner of the horoscope are covered or taken on by other people.

The main gift is bright oratory skills. Eloquence helps to get out of the water even with obvious sin.

The native forcefully enters into polemics with colorful images, as well as a virtuoso mastery of pseudo logics, confuses the interlocutors, persuading them to their advantage.

If Mars, Ascendant and Midheaven are in the signs of Sagittarius and Libra, then the native will turn out to be an unsurpassed lawyer or prosecutor.

In the case of a situation in Aries, Leo and Capricorn, an intelligent and far-sighted military commander.

Being subordinate in this situation is fraught with conflicts and envy, since the native does not recognize the masqueraded generals and leaders who received the post by pull, exposing their failure.

For the time being, he will put up with work under the guidance of a brave and decisive person, but will not give up the idea of ​​becoming a boss himself.

It is important to take into account other nuances of the influence of the Mars – MC sextile on fate: courage, bravery and sexual attractiveness arise in the moments of movement towards the goal along the line of purpose or protection of the interests of the company and its employees.

The ability to minimize weaknesses and concentrate on strengths in professional activity, forgetting about quarrels and resentments for the sake of the case; help and support comes from middle-aged men: they are teachers, friends, fans, husbands.

It is interesting that the sextile Mars – Midheaven turns on and works more actively when rivals and competitors appear.

The native simply flourishes in the fight for the palm, showing talents in the most attractive way, while never turning to personal insults.

This is a game that cheers and invigorates him. The native’s mother is incredibly active.

Surely no one in the house was allowed to be lazy, and sport was an integral part of life.

Thanks to this regime, men and women with the sextile Mars – MC grow up to be hardworking, stubborn and active.

They also rarely rest in their house, they take work at home, or relax, doing Martian hobbies: repairing, woodworking and carpentry, and if they live outside the city, then agriculture and floriculture.

Men with this aspect are incredibly attractive in the process of performing work duties or when they take the lead of a team, and women often fall in love with their bosses.

The fame and popularity is brought by the charisma of rude sexuality, as well as sports achievements.

Astrologers recommend that the carriers of the sextile Mars – MC engage in team sports: football, basketball, tennis, thereby activating the energy of the aspect.

King Trigon is called the guarantor of a person’s life luck. It helps you easily achieve your goals: obstacles magically disappear, the right people and circumstances are attracted. He gives talents and the desire to show them to the world in the most favorable way.

Mars is an ambiguous planet. If you walk along its upper floor and show courage, endurance, confidence in victory, then the trine with the Midheaven Meridian will bring leadership positions, big money, and a stable ascent to the heights of a career and immeasurable respect from others.

Influence of Trigon Mars – MC on fate in spiritually developed people, the aspect is manifested through positive ambition.

Yes, a person really wants to become famous and to lead the fate of the world, but he works hard and tries to be a warrior of light, destroying darkness.

Sliding down to the lower steps of Mars, the native blocks the positive energy of the trigon.

The alliance with the planet of war is short-lived: if you get angry, fiercely fight for a place in the sun, instead of a confident systematic proof of professional reliability, then the aspect can only reflect the attacks of envious people.

In any case, men and women with the trigon Mars – MC are resolutely moving towards the goal. They like to compete and compete.

At a high level of development, they perceive it as a game, and defeat only provokes new achievements.

It is worse if the native is not burdened with moral principles. In this case, he can easily commit malfeasance in order to get a high post.

People around you feel the energy of the leader emanating from the native and strive to become faithful companions, so there are no problems with friends.

However, Martian selfishness can very well lead to misunderstandings and breakdowns in relationships.

It is easier to control the trigon, knowing the main directions of its influence: sexual charisma manifests itself in the period of professional demand: a person flourishes at work, even without possessing classical beauty.

Willpower, energy, activity, a fountain of ideas and understanding of their practical application; conservatism in a good sense of the word, adherence to traditions, protocol, loyalty to the oath and word of honor; physical endurance: they are able to work day and night if they are doing what they love.

An excess of creative energy of an applied nature: talents of a designer, tailor, jeweler, repairman, agronomist and architect, regardless of the main specialty; the desire to be a lone leader and not depend on the decisions of other people.

Striving for a leadership position, although the carriers of the trigone are less likely to defeat the owners of the Mars-MS connection.

Trigon speakers have money problems due to the ease with which they get the job done; they don’t know what to pay for when they haven’t done anything special. It is important to adequately assess the result and not perceive your work as a hobby.

Although it is the hobbies of youth that bring them success in their careers. They are brilliant politicians, entrepreneurs, athletes, military men and engineers. The native’s mother is a strong and self-sufficient woman who has created herself from scratch.

Most likely, she has her own business and complete financial independence from her husband, or she is raising a child alone, rigidly and disciplined, tempering him and encouraging him to go in for sports.

Thanks to this, men and women with the trigon Mars – MC are able to survive in any difficulties and feel comfortable while staying in a student dormitory or in harsh military conditions.

If the Sun is in a masculine sign, for example, in Aries, then the father is the leader of upbringing.

It is possible that the ambitiousness and independent thinking of parents will contribute to the choice of a profession, although with the position of Mars in the signs of fire and earth, a person will only listen to himself.

As a business and marriage partner, carriers of the trigone choose strong and independent personalities, passionate and ready for anything for the sake of their beloved business. A great option is a family business. Success awaits them also under the guidance of a man they are proud of and admire.

Practical interaction with the trigon Mars – Midheaven With the affected position of the Sun and additional negative aspects to Mars, you will have to gain victory in the professional field through trials.

The easiest way is to overcome obstacles and cope with enemies that are inevitably attracted by the excess of Martian energy, the owners of Mars in Aries, Capricorn and Scorpio. Positions in Taurus, Cancer and Libra give passive success to wait and see tactics, but provide greater security.

Excess aggression in the competitive struggle is shown to be removed by physical exertion, intense walks in the mountains and in nature, by farming in the country.

It is necessary to choose a profession in which you need to constantly prove your competence and competitiveness.

Sports anger is necessary for the maximum inclusion of the trigon Mars – MC, the main thing is that it does not pass on to the personalities of rivals, which will lead to crime.

Astrologers recommend that the owners of the aspect often wear red, and at work, use business accessories of this shade.