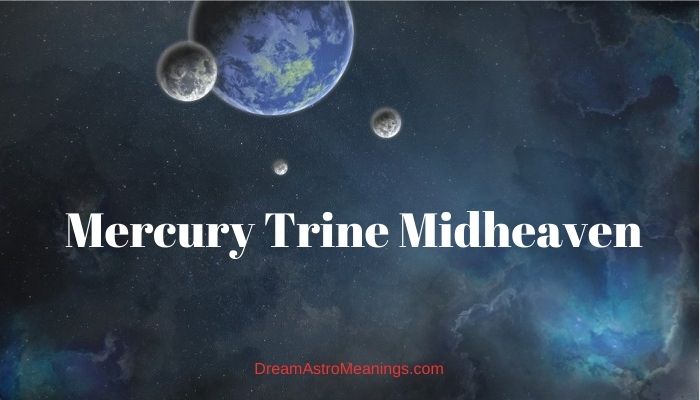 Mercury rules the signs of Virgo and Gemini related to communication, transportation, cars, computers, disease, and work that requires attention to detail.

In social terms, Mercury symbolizes a teenager, a young person (both a man and a woman); younger brother or sister, neighbors; a pickpocket, swindler, sharper; merchants and sellers; scientists and teachers.

If a person from childhood shows curiosity and a keen interest in knowledge, Mercury will willingly show him how huge and amazing the world around him is. In essence, Mercury represents the principles of rational thinking, speech, contact, mediation, interaction, learning, exchange.

In the natal chart of the horoscope, Mercury symbolizes the type of thinking of a person, his consciousness, curiosity, intellectual aspirations, and the ability to communicate and learn, liveliness, dexterity.

The sphere of influence of this planet includes the third and sixth houses. The third house personifies the self-expression of the individual in the everyday environment: the way a person expresses his thoughts in oral and written speech, communicates with household members and strangers, for example, with fellow travelers in transport.

The sixth house is health, social duty, service relations. In the field of physiology, Mercury primarily affects the five senses, the nervous and autonomic systems. Public duty means helping people. This can be charity or volunteer work.

In the business segment, Mercury regulates the relationship between coworkers, bosses, and subordinates. His favorite professions are journalists, teachers, publishers, and trade and service workers. Principle The most specific “character” trait for Mercury is traditionally the ability to establish relationships.

The myths also said that Mercury (Hermes) is the mediator between Olympus and the Earth, the messenger of the gods, connecting their world with the world of people by transmitting information (commands of the gods to people, requests from people to gods).

In other words, it connects systems and processes of various levels of the hierarchy, for example, giving continuous information a discrete form (expressing images in words and signs – analysis and thinking), defining the interaction of the type of boss-subordinate, human-organism (hygiene), organism-organs (diseases ), teacher-student.

The implementation of the principle of Mercury, the relationship between the integers of various levels of the hierarchy, requires the establishment of contacts between them.

And this requires exactly those properties that it traditionally symbolizes – rational thinking, the ability to create mental structures, collect information, formulate thoughts, separate the main from the secondary, the desire and ability to understand the interlocutor, activity and mediation abilities.

These qualities are implemented in different ways in specific tasks – in science and business, in journalism and biology, in interaction between people, but no matter how they are realized, they are always aimed at establishing contacts and exchanging information or material values, at shaping the efforts of various integrity to solve this kind of problem.

The role of the Mercury Principle makes him be the one who searches for an adequate way of expressing the creative solar principle, collects many diverse and equally significant facts for him, completely detaching himself from their assessment and generalization, with the aim of their subsequent integration by someone into some system, seeks to share what he finds and make it common property.

The role of Mercury most fully corresponds to the role of an intermediary.

However, one should not forget that the mediator in this case is, like the definitions of the principles, functions and roles of the other planets, a symbol of the role of Mercury.

Strong Mercury Harmonious connections enhance the activity of thought, give intellectual abilities liveliness and originality, and give a brilliant wit and a great sense of humor. The “pet” of Mercury is well versed in people.

He clearly knows what he wants from life and how to achieve it. Weak Mercury When Mercury is struck, a person’s life can be overshadowed by speech defects, nervous pathologies, inability to express their thoughts in a simple and understandable language.

To success on the wings Trigon is a symbol of easy luck. It unites the planets and important points of the horoscope, standing in a related element, accelerating the achievement of the desired.

If one of the participants is the Meridian of the Midheaven, then the native quickly determines the sphere of professional implementation, intuitively knows how to achieve recognition, and receives honors even for small successes, not to mention discoveries and high earnings.

When Mercury is in the trine – the messenger of the gods and the patron of intellectual development, the chances increase significantly.

A keen mind, a sense of humor and good intuition help maintain harmony in the workplace and at home in the family, as well as make a brilliant career, paying attention to loved ones. Speed ​​is the key word for such a person’s success.

As soon as he slows down, succumbs to laziness or boredom, the trine imperceptibly begins to weaken. The influence of the trine Mercury – MC on the fate the professional ambition of the owners of the aspect is closely related to intellectual activity.

Even if, by chance, they earn extra money as sellers in the market, then they are the most knowledgeable and well-read workers with a lot of interests: from politics to local gossip.

At home they always have a huge library, modern gadgets and high-speed Internet to quickly receive information from various sources. Good relationships with relatives, especially younger siblings, help in professional advancement. They inspire achievements or magically help the native to be in the right place at the right time.

Despite the fact that carriers of the trine Mercury – MC cannot imagine life without a public demonstration of their brilliant erudition and impressive career, home comfort is no less important for them. 70% of the time, they work hard to invest big in their dream home, especially when Mercury and Midheaven are in the earth and water signs.

If the position is in the element of fire and air, then there may be several such houses: for the soul and for social meetings.

The main lines of influence of the trigon Mercury – MC on fate: a sharp mind, tenacious photographic memory, imagination, quick reaction and a commercial streak contribute to career success.

The decision to choose a profession is made in early youth and confidently follow the plan; brilliant oratorical skills are instantly applied, events develop in such a way that it is impossible to stay away from the podium or stage.

Mercury retrograde may require efforts from the native in his school years, but after entering the university, knowledge is given easily, as well as the sympathy of teachers.

Higher education is an indispensable basis for success, it is desirable to study full-time; the ability to give practical advice, direct a person to the desired path of development, the gift of a psychologist; the desire to learn from famous and experienced people in order to take an appropriate position in society.

The owner of the aspect will succeed in any field of activity where intelligence is valued: politics, advertising, real estate, tourism, pedagogy, medicine, journalism, PR, commercial literature, jurisprudence.

It is important to choose an area of ​​work with a variety of activities, since routine work is not for the native. Personal relationships Happiness of the owner of the horoscope in the open channels of kinship.

The mother is most often a well-educated intellectual, who early discovered the child’s talents and applied all the methods to develop them: circles, a library, a music school, and in addition, approval and admiration for success.

Short trips, and later business trips, facilitate meetings with people who will become employers, mentors, and lovers. If, according to your inner feelings, there is a period of stagnation, you need to go on a journey.

The boss, as a rule, is younger in age, cooperation with a brother or sister is not excluded, which will bring mutual benefit, provided that the 3 houses are positively assessed.

Holders of the trine Mercury – MC easily get to know each other, acquire useful connections, thanks to their innate ability to easily start a conversation and make a favorable impression.

In the family they have harmony and harmony, thanks to the ability to negotiate.

Practical interaction with the trigon Mercury – MC It is desirable for men and women with this aspect to live in big cities, where from childhood they can find the use of their outstanding mental abilities and improve them.

It is important to develop the emotional sphere so as not to become a dry intellectual.

For this, music lessons are ideal, where the study of fine motor skills and the activation of the imagination are combined.

The second most useful is painting and sculpture. The carriers of the trine Mercury – the middle of the sky have a vulnerable nervous system, therefore, sports with moderate physical activity are shown to strengthen it: tennis, shooting, swimming or team games. Clarity of mind is the number one way to achieve any goal.

However, we must not forget, then the mind tuned to harmony cuts off any doubts about the correctness of the decision, criticism and even advice from those who, in the native’s opinion, are not sufficiently educated, which leads to bragging and overestimated self-esteem.

As a result, reluctance to change behavior for the better and a damaged reputation.