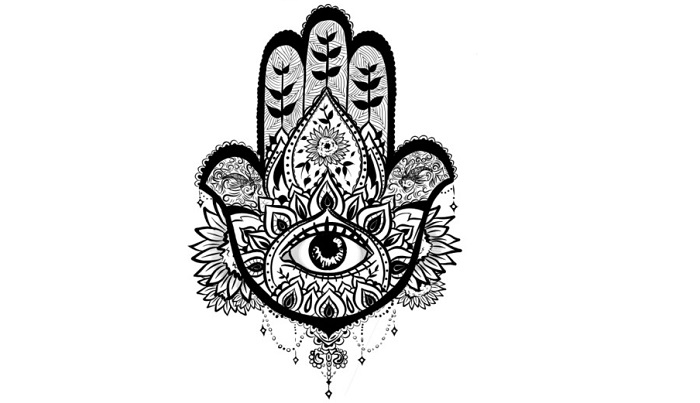 Hamsa hand is originally a middle-eastern talisman shaped in the form of a human hand, often with an open eye in the center of its palm.

This charm is known around the world and is particularly popular in northern parts of Africa.

In modern times, Hamsa is a popular decorative motif, often without any special meaning; it is featured in fashion design patterns, modern jewelry design and so on. Some designers intentionally use it, others, perhaps, not.

The truth is, modern people have been realizing that we, as a population, have to reconnect with forces unknown, those many of us believe make this world go round. It is not a matter of certain religion or a spiritual path.

The thing is, we have distanced us from the universe as it is, lost in our materially focused world.

It, of course, applies to Western world in particular and all associated with it. Globalization and processes that come along are also in question.

Be it as it may, Hamsa hand is to be seen around the world. In this article, we will talk about its origin, its symbolism and meaning and its spiritual uses.

It is a motif to be found in Muslim traditions, Jewish and Christian, as well. In each one, Hamsa hand is called different names.

Hamsa hand originally comes from Mesopotamia. This symbol is found on artifacts dedicated to Assyrian and Babylonian goddesses Ishtar and Inanna.

The original and basic meaning of this motif is that of divine protection.

In almost all of the world’s religions and traditions, a hand has been a symbol of power, strength, giving and taking, kindness, grace and protection above all.

In many belief systems, a motif of a hand actually represents the hand of a divine entity.

In Ancient Egyptian sources, namely the Book of gates, an inscription found on a sarcophagus of pharaoh Seti I, the motif of a big hand represents the highest power that governs both heavens and earth.

On vignette that decorates the text, there is this big hand firmly holding the chain that bounds four of the god Horus’ sons.

The chain also restrains the god of evil, the archenemy of the Sun and its most adored deity, Amon-Ra.

The motif of a hand has always been associated with the power of God, in Christian tradition. Medieval depictions often represent God’s power with a motif of a hand coming out of heavenly clouds.

In some depictions, the hand is wide open and rays of divine light spread from its fingers. The most common depiction is a hand in a gesture of blessing people of the earth.

In the Holy Scripture, the gesture of raising hands towards the heaven, where the God and his angels dwell, represents the act of pious worship, the act of prayer.

Interestingly, one of much older belief systems tells us about the very same gesture.

Assyrians had the whole system of prayers called Nis kati, which literally translates to ‘hand-raising’.

In western parts of Asia, the gesture of hand-raising is considered an act of praising and invocating divine power, regardless of the reason. It could be cursing, begging or in prayer; in each one, people would raise their hands.

The mighty king of Babylon, Nebuchadnezzar, the most powerful and the longest reigning one, was raising his hands in prayer to the god Marduk, according to historical sources related to the era of his reign.

Models of amulets shaped in form of an open hand are to be found in many traditions around the globe. It is not always a hand like Hamsa, one with open palm, straight fingers, conjoined.

Hand shaped artifacts have usually been associated with protection and people would carry them as talismans. A motif of a hand would decorate emperors’ scepters, weapons and such.

Let us remind you of few more hand symbols. The gesture with a thumb, the ring and the little finger bent has long been a sign of a blessing. The notorious one that represents devil’s horns you definitely know of.

Well, it is not the only meaning of this hand gesture, with index finger and little finger raised.

This gesture has also been used to ward off evil, contrary to popular belief that it, in fact, summons demons, devils and else.

However, it is a story for another day. A closed hand with only forefinger raised represents protection from evil eyes. There are numerous beliefs and customs regarding left or right hand.

For example, in Arabic cultures, the right hand is a clean one and it represents honor, whole the left hand represent impurity, since it has been used for not as ‘clean’ actions, although necessary ones.

Hamsa hand or the Hand of Fatimah

The name of Hamsa hand comes from Arabian word khamsah, which means ‘five’, referring to five fingers of a human hand. Hamsa hand is also known as the Hand of Miriam in Jewish tradition, named after Moses’ sister Miriam.

In Christianity, it is known as the Hand of Mary, named after Jesus’ mother.

In Islam, this amulet is known as the hand of Fatimah, which is the most common association with the talisman.

The meaning of Hamsa hand is very positive; it is a lucky charm, a talisman for protection, usually worn as a piece of jewelry or hanged on the wall.

Who was Fatimah and why her hand has so important meaning? Fatima was a daughter of the prophet Muhammad, an Arab social and religious leader and also the founder of Islam.

Fatimah, also called Fatimah al-Zahra, which means ‘the shining one’, ‘the splendid one’, ‘the lady of light’, was the daughter of Muhammad and his first wife Khadijah. According to teachings of Shia Muslims, she was the only daughter of the prophet.

Fatimah is the most popular name for girls in Muslim tradition. She is an important character in Islam. Fatimah is known by many titles, besides the one mentioned.

She is also called al-Batul, ‘the Pure’ or ‘the Chaste one’, al-Siddiqah, ‘the Truthful woman’ and many more.

All her names tell about her purity, good heart and humbleness. Shia Muslims believe that Fatimah was an embodiment of innocence and purity and her hand they consider a symbol of strength and protection.

Fatimah’s hand fingers also represent family of the God’s prophet. Muhammad himself believed Fatimah was one of the four purest women ever. The others were his wife Khadijah, Asiya, the Pharaoh’s wife and Maryam, the mother of Isa (Jesus in Christianity).

Hamsa hand is a common motif in Jewish tradition and it was introduced to it by Sephardi Jews.

Sephardi are Spanish Jews who probably saw the motif on one of the most widely known (and extraordinarily beautiful) Islamic fortress in Spain. Jews interpreted the symbol according to their own tradition.

For them, it represents five books of Torah. They also often call it Miriam’s hand. According to one belief, her hand guided people of Israel through the desert, on their way to the Promised Land.

In modern times, Hamsa hand is most commonly associated with Kabbalah and its popularity grows, as there has been a renewed interest in Kabbalah teachings in recent years.

As we have mentioned, it seems as if the motif of Hamsa hand has been re-introduced to the global society.

Many artists use this motif in order to express (and, possibly, to induce) certain aspects of their creativity.

Hamsa Hand as a talisman

In all traditions, Hamsa hand is considered a powerful amulet that could ward off evil forces.

It has special power against evil eyes; it is the reason why it often features an eye in the middle of the palm. Hamsa hand purpose is simple.

It is meant to protect the one who wears it and to bring its carrier luck and fortune. It is believed that it guides a person through difficult times and provides its carrier with vital energy.

It is common that it features palm lines, so that it could tell about a person’s destiny and help an individual discover the true desires of the heart. Hamsa hand faced upwards has two important meanings.

On one hand, it is a greeting sign that praises destiny in its positive aspects; on the other side, it is a warning sign that chases away negative energy.

Hamsa hand could also be worn facing down and this style is usually thought to attract good energy into the life of the wearer.

Some believe it is ‘luckier’ to wear it other way. Either way, Hamsa hand is believed to bring in positive energy and ward off negative.

Let us remind you that the palm of a human hand has always been considered an extremely powerful energetic field, the place where energy concentrates.

Lines on palms are often associated with our mind; this is the reason why Hamsa hand often features both lines and symbols and sometimes even an inscription of name of the wearer.

It is thought that it could somehow affect the wearer’s destiny in positive way.

It is also interesting to note there are undeniable similarities between Hamsa hand and Nazar, a blue glass amulet that represents an eye. Both symbols carry similar powers and both are a protection from an ‘evil eye’.

Beliefs about ‘evil eyes’ are probably as old as human civilization is.

However, Hamsa hand could be considered a more ‘sophisticated’ symbol, since it has additional meanings and properties.

If we think again about the ‘shining one’, Fatimah, Hamsa hand does not represent only protection from evil. It also inspires goodness, purity; it symbolizes friendliness, mercy, humbleness, kindness and grace.

Hamsa hand talisman is believed to be an especially good lucky charm for people dealing with difficult times and those that find themselves at crossroads of their destiny.

Hamsa hand is an amulet of guidance, support and encouragement.