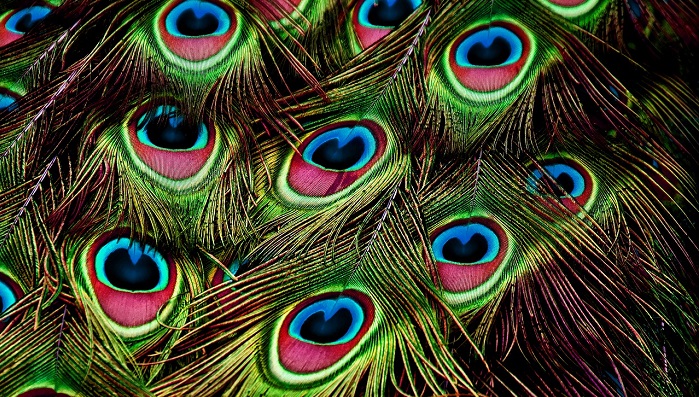 One of the most beautiful and exotic birds in the world, peacock has always been attracting humans’ attention, awakening our sense of admiration and curiosity.

Not only this extraordinary bird captivates by its exotic, irresistible looks, but it also makes us think of the meaning of its appearance.

Peacock’s tail is really an incredible creation of nature; its feathers that look almost like living eyes have always been a subject of many beliefs and meanings of the mystique.

Peacock’s beauty has always been fascinates us. This magnificent bird has always been associated with the idea of narcissism, of the desire to be seen, adored, in the center of attention.

When a peacock spreads its majestic tail to its full size, you literally cannot put your eyes away.

Peacock’s tail is astounding, magnetic, enchanting in its looks ad somewhat mysterious and magical at the same time.

However, it is not only that beauty and self-representation are associated with peacocks.

Throughout history, legends and myths of the human world, peacocks have also been associated with the idea of immortality, with spirituality, wisdom, vitality, noble traits, protection and gracefulness.

In different cultures around the globe and throughout centuries, peacocks have been carrying many meanings.

Let us learn some interesting stories and legends about peacocks, which would help us better to understand peacock’s feather symbolism.

Myths and legends about peacocks 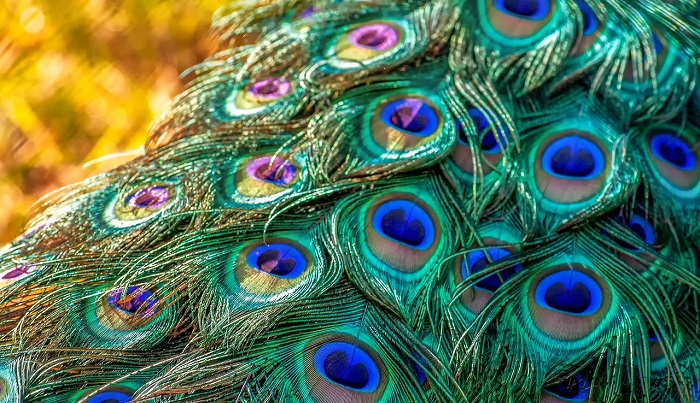 In Ancient Greece, peacocks were associated with the goddess Hera. Hera was the wife of Zeus and the goddess of marriage in Greek mythology.

Ancient Greeks used to keep peacocks in temples dedicated to the beautiful goddess.

In Ancient Rome, it was all the same. Their goddess Juno, who is counterpart to the Greek Hera, was also associated with peacocks.

According to one Ancient Greek legends, Hera, known from many stories to be a very jealous deity, ordered Argus to keep his eyes on Zeus’s secret lover Io.

Argus Panoptes, Argus the ‘all-seeing’, was a thousand-eyed giant, no more, no less. Hera ordered him to keep all of his many eyes on Io, transformed into a white heifer by Zeus.

Actually, Hera made Zeus give her the white heifer and then arranged that Argus watch over her.

However, Zeus sent Hermes who made Argus fall asleep, so that he can be killed and to get his lover back.

Hera was however thankful to Argus for his loyal services and she eventually turned him into a beautiful peacock, the bird with many-eyed tail.

Another version of the myth says that Hera was not that happy that Argus fell asleep, so she actually punished him by taking his eyes and putting them on the peacock’s tail.

In Ancient India, peacocks were also regarded as creatures of extraordinary beauty. They were commonly kept in gardens of many palaces.

Not only living birds were admired and taken care of, but also peacock motifs are very common in India’s art. Statues, paintings and carvings representing peacocks are a common royal decoration in India.

Peacock’s throne was a special chair used on special occasions.

It was adorned with precious stones and had a golden peacock decoration on the canopy; this seat was in use only on special official ceremonies. Peacock is one of national symbols of India, as well.

If you travel there and visit some of the temples, it is very likely you will see beautiful peacocks wandering around.

Many Hindu gods were often depicted as sitting on a peacock and riding one. Not only peacocks were considered beautiful, but also magical.

According to the legend, peacocks ingest snakes’ venom so to create those captivating feather colors. It was also believed that peacocks themselves have healing properties.

Their feathers and flesh were thought for a magical cure against snakes’ bites and various diseases; peacocks’ blood was believed to posses the power to chase away evil spirits.

Well, we are not sure how much peacocks were happy to share their flesh, blood and feathers so.

Another Hindu tradition says that peacock’s call is no less but the voice of a devil, its steps the pace of a thief, but its feathers were regarded as feathers of angelic beings.

It is interesting to note how abundant and diverse peacock symbolism is in only one culture.

A creature of so extraordinarily remarkable, but also puzzling looks easily inspires the whole mixture of opinions and possible meanings.

For Chinese, peacock was a sacred bird. It was identified with the Buddhist Wheel of Life, associated with the Ming dynasty.

In both China and Japan, peacocks were associated with feminine deity of mercy, compassion and grace. In these traditions, peacocks were closely identified with the concept of faithful love; Chinese and Japanese believed a peacock dies soon after its partner had died, out of grief and sadness.

One strange Chinese belief says a woman could get pregnant if a peacock looks at her.

Christian tradition is mostly fond of peacocks and it identifies the beautiful bird with the concept of God.

Peacocks are also associated with the sun and their tail feathers’ pattern with the starry sky.

There are other scattered folk beliefs and legends associated with peacocks. One says that peacocks bring rains. Since the bird becomes restless before a storm, people made it a symbol of rain.

Peacocks were even sacrificed in order to please the rains to fall and make lands fertile.

Peacocks have been associated with many ideas, from beauty, immortality, royalty and pride, over grace, compassion, mercy and peace, to arrogance, vanity and even evil spirits.

The widespread association is that of pride and self-love; in modern times, people still call those who want to be seen and adored for their beauty and looks – peacocks.

Feathers are a common symbol in numerous cultures around the world.

Peacocks’ feathers are something special, but let us first see into feather symbolism in general. Birds’ feathers had an important role in numerous ancient cultures and traditions.

It has been a common (magical) motif in art, it has been an object used in numerous rituals and a part of various customs around the globe.

Until this day, it has been believed that feathers are a sign from forces higher than we are a message from guardian angels, a message from any mysterious energy that we cannot fully comprehend and fathom.

If you find a bird’s feather, as if all of a sudden it appears in front of you, it possibly has some deeper meaning.

Depending on its color and the bird it comes from, the feather has specific meaning.

For example, a tiny, gentle white feather is a good omen; it is a sign of good luck and fortune. This feather suggests your guardian angel sends you a message of hope and encouragement.

A long, sharp white feather indicates a choice has to be made; one related to your family or career.

It is neither a specifically good nor a bad sign, but it should make you wonder about certain issues and decisions.

Black feathers have always been associated with negative forces. Dark wings, dark words. If you find a black feather, be careful and observant.

It could be a warning sign that as well might prevent you from experiencing a negative event. It could also help you be ready for it, if it was inevitable to happen.

Blue feathers are a symbol of higher wisdom, protection, inspiration and spiritual awakening. Grey feathers symbolize calmness and adaptability. Green ones are for healing, goodness and general balance. Brownish feathers are for stability and perseverance, friendship as well. Black ones indicate a change and transformation and stand for negative energies and signs of danger.

Like in many other traditions, a rare and irresistible purple color is associated with spiritual world, so purple feathers represent a connection with the higher realm.

Feathers of different birds are associated with specific meanings and folk beliefs, as well.

One folk belief says you should have a feather sewed into your clothes as a protection charm.

Ravens’, but also eagles’ feathers have been used in love magic, but also in dealing with family issues.

Pigeons’ feathers should never be used in any magical ritual. It represents protection itself, since doves and pigeons are identified with the Holy Spirit.

An owl’s feather is extremely powerful omen; its feathers have been used in rituals to awaken intuition and fathom mystical knowledge.

Finally, we come to peacock feathers. From the myth of the all-seeing Argus, but also from Christian identification of peacocks’ with the all-seeing eyes of God and the Church, we could easily conclude that peacocks feathers’ represent this extraordinary, supernatural power of being able to see everything that takes place in the world.

Peacock’s feather that reminds us of thousand eyes represents the eyes of the divine.

Their beauty is not only associated with the material, physical idea of beauty, although this is the first association we have in mind. This beauty is higher, mystical, even divine.

In that sense, peacock’s feathers represent beauty that is eternal, immortal; it is beauty that is both within us and around us. Peacock feathers have been used in Buddhist rituals for purification of the soul.

Peacock feathers are often considered a lucky and fortunate sign for those who find it.

Since these birds are associated with wealth and royalty and are honored guests in kingly palaces and gardens, finding a peacock’s feather is a good sign that could bring one fortune.

In modern times, people still make amulets featuring a real peacock’s feather or those depicting it.

Peacock feathers are also believed to have some mystical powers related to marriage. Well, the bird is, indeed, associated with goddesses of marriage, if we look back into Greco-Roman mythology.

One fold belief says that if a woman wants to get married, she should step onto the ‘eye’ on a peacock’s feather.

Remember that Chinese legend saying that a look from a peacock could make a woman get pregnant?

Feathers of these magnificent creatures have been associated with numerous other beliefs, just as overall peacock symbolism is loaded with meanings. Some people use peacock feathers as a protection from evil spirits, others use it to attract love into their life.

Many believe that a talisman made f a peacock feather could make them rich.

In Feng Shui, peacock feathers are used for protection of home. According to Feng Shui tradition, each year all members of the household should be given a peacock’s feather, with a red ribbon attached to it.

This especially decorated peacock’s feather is meant as a protective talisman; it would prevent bad events to happen and additionally protect the home.

Peacock feathers, just as peacocks, are associated with beauty, elegance and glory. In recent times, you could probably see that peacock feathers have been re-introduced as a common motif in fashion design.

Jewelry featuring real peacock feathers or artificial ones, patterns with peacocks or their feathers have been very popular throughout latest seasons.

It is believed that if you see a peacock feather on the street, something good is about to happen.

Dreams about peacock feathers could have many meanings; it depends on the contexts.

However, one of these could be a warning sign. Dream about a peacock feather indicates some people around you will try to seduce you by their beauty and sweet talk, so that they could trick you.

Dreaming about cutting down peacock’s feathers from the bird’s tail might indicate someone wants to deprive you of your status and vice versa; you might be very jealous of someone’s success and beauty. Do not let your vanity corrupt you.