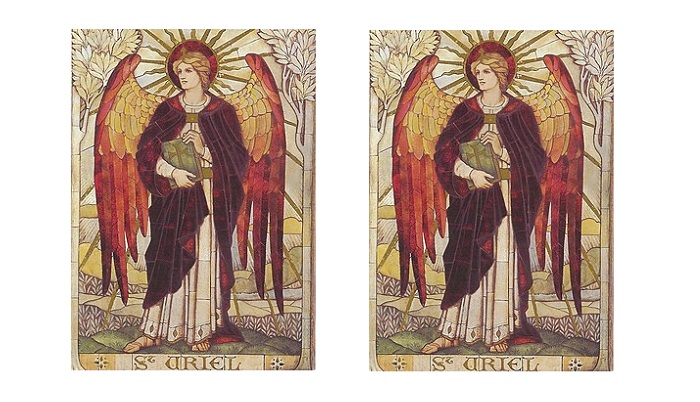 Archangel Uriel is believed to be the angel of wisdom and enlightenment in terms of transforming negative thoughts into positive. He is known as the Light of God, an angel that has the ability to reflect the light of the Most high.

According to certain beliefs, it was Uriel the archangel that warned Noah about the great flood. Other divine acts are commonly attributed to Uriel.

It is believed that Uriel brought secret knowledge of alchemy into human world and that he was the one to introduce Kabbalah, the mystical Hebrew tradition.

Uriel is sometimes depicted as holding a scroll or a book, a chalice, a disc that represents the sun, an orb with stars and constellations.

He is sometimes depicted with fire in his alms or carrying a flaming sword.

Uriel in Judaism and Christianity

Having in mind the abundance of religious works and variations of religious teachings themselves, it is not easy to define one point of view considering Uriel. He is an archangel featured in postexilic rabbinic traditions and in Christian ones.

Uriel is mentioned in kabalistic and apocryphal teachings, as well as in occult works. He is confused with a considerable number of other figures and names, such as Azrael, Raphael, Nuriel, Sariel, Vretil and more.

The Hebrew Bible does not call archangels and angels by name. In postexilic tradition, only two of them are given names. Those two are Michael and Gabriel. Uriel and others are never mentioned.

Raphael is mentioned in the Book of Tobit, which was accepted in both Jewish and Christian canon, rejected by Protestants.

Uriel is often regarded as the fourth archangel and he is mentioned under the name Phanuel in Pseudo Dyonisus angelology.

The Book of Enoch, however, distinguishes Phanuel from Uriel. In this apocryphal work Uriel is regarded as the light of God; the name is translated as ‘God is my Light’. Throughout different works, Uriel was given different tasks and purpose.

He is frequently considered an angel of repentance, the cherub anointed by the God to protect the Tree of knowledge.

In the text known as the Apocalypse of Peter, Uriel is not a merciful angelic being we often identify the very idea of angels with. He lacks compassion and simply does his job as the angel of repentance.

Figures of angelic beings are often misinterpreted in different analyzes of the Bible.

If we think of them as divine presence, angels have their purpose in lives of humans and the energy of heavens is just how it is meant to be.

Archangel Uriel is regarded as a cherub and an angel of divine presence. Modern angelology also sees him as a patron of arts.

The highest position associated with Uriel is possibly that of presence, the ‘face of God’.

This means that this archangel is allowed to be in the presence of the Most High and, thus, he reflects the light of the God. He is also regarded as the angel of salvation.

The angel of presence and illumination

In spiritual sense, archangel Uriel is considered the one that radiates the light of the divine and connects us with the higher realms.

He is a link between spiritual levels and our world, according to modern day spiritualists.

They believe Uriel is the angel of wisdom that could help one find a way to higher levels of consciousness. He is an angel that helps.

This archangel could give us the strength to take up responsibilities in life. He help us find security and stability we already possess deep down inside; he would help us find our inner strength and use it for good causes.

According to spiritual interpreters, archangel Uriel helps us transform painful experiences and disappointments into positive ones and lessons, through understanding God’s thought that lies behind all the event that take their place.

If you think once again about Uriel as the angel of repentance, it may sound cruel, but it is, indeed what humankind needs.

Repentance does not always literally mean to pay for something you did. Repentance could have a much deeper spiritual form.

Knowing yourself, being capable of understanding your destiny, the purpose of things that have happened to you is the true repentance.

TO repent or to atone does not mean to pay an eye for an eye. Understanding yourself, through understanding the God’s word, means to fathom the deepest secrets of your soul.

It helps you find the light within you, not the opposite, which many would think.

We could say that archangel Uriel is a guide on that path. He would help you go through it and see the light.

Archangel Uriel governs over ideas of universal consciousness and divine order. He is also associated with creativity, creation, alchemy not only as physical practice but the alchemy that transforms ideas.

Uriel helps us transform impure into pure, negative into positive. It all leads us step by step top enlightenment and great relief that comes along.

People often wonder how to be sure that they are connected with angelic world and that angels help them. Well, angelic presence is usually subtle.

They communicate with us through symbols and signs.

One has to open their mind and soul in order to recognize those signs; many times angels help us do so. WE often seek for angels’ support and help.

Archangel Uriel, the angel of illumination, wisdom and the one that reflects the Light of God thus leading one to enlightenment, in a way, has the way of communicating with human world.

Being the one associated with conscience, archangel Uriel could heighten your intuition.

If you notice how easily you see through things in life and how better you are in actually experiencing the world, it may be archangel Uriel channeling his divine power in you.

Suddenly, you just know what to do; you know when something feels right or wrong and your intuition does not fail you. Simply follow your feelings, do not every try to force any.

Sometimes it could happen your mind gets filled by negative thoughts. These thoughts could be sent to you by archangel Uriel, in order to encourage you settle things that bother you down; for example, an ongoing dispute with another person.

Archangel Uriel, known as the one that governs art, could give you great inspiration and motivation to create.

When you feel as if inspiration will never come to you again, you could direct your sincere desires ad thought to the archangel Uriel.

Archangel Uriel could help in many situations related to education, knowledge, wisdom, inspiration, creativity issues and else.

Uriel can help with all kinds of tensions that come from the inside and help us feel more content about ourselves. The energy Uriel emits is the one of inspiration, radiant and warm.

One of the ways which archangel Uriel might be using in trying to reach you are sparks of electric power.

In modern world, it is something we often identify with sparks of new ideas. A light bulb is often associated as a new thought, idea and symbolizes creativity. Angels often use the ‘magic of electricity’ in order to draw our attention.

The parallel between the meaning of lights that are generated by electricity and the divine light archangel Uriel represents is undeniable.

In metaphysical system of angelic colors, Uriel represents the red light ray. This red light is associated with wisdom and service. As archangel of wisdom, through red light ray, Uriel help us make wise decisions, process our emotions and especially let go of the negative, destructive ones. All of it will help us be wise, content and in good relations with the world and the people in it.

The red light ray is also in connection with solar plexus chakra. This chakra is incredibly important in channeling spiritual energy.

It helps people heal physically, emotionally and mentally. Red angel light ray corresponds with Friday, so some people believe it is the best time to think about it and to pray to Uriel.

Archangel Uriel and his helpers would help you find wisdom within your mind and to help you discover true causes you would like to serve. Eventually it all leads to wise service in the light of God.