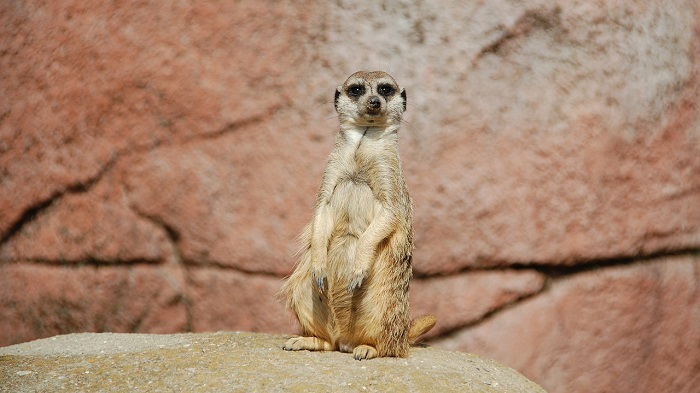 Suricates or meerkats are small carnivores from the mongoose family. They are native to Africa, and live in the Kalahari Desert in Botswana, in the Namib Desert in Namibia and Southwestern Angola, as well as in South Africa.

These animals live in groups of usually around 20 meerkats, called gangs or clans, and sometimes mobs. Some big families can have 50 or more individuals.

They are active mostly during the day. These animals weigh up to 2.5 kg and are up to 50 cm long, with a tail around 25cm long. Their tails are important parts of their bodies, and they use them to maintain their balance when standing upright.

They also use their tails for signaling each other.

Meerkats have binocular vision like cats, and their eyes are placed in the front of their faces. They have claws and they use them for digging their burrows, digging prey or climbing trees. Meerkats are very fast diggers.

Their furs are gray-silvery-brown, with short parallel stripes on their backs which are unique to each individual. Their diet is made mostly of insects, but they also eat snakes, lizards, scorpions, eggs, spiders, small birds, plants, fungi, etc.

One of their special characteristics is being immune to the venom of some deadly snakes and scorpions of the Kalahari.

The young meerkats learn how to forage for food with an older member who is their tutor.

The young learn by observing the adults and mimicking their behavior. When they forage for food they also do it in groups, while one of them guards for predators. The guards shift in about an hour. The guard produces peeping sounds if all is clear.

When a guard spots a predator, it produces a warning bark or a whistle, which is a sign for the other members of the group to run into the burrow.

They have a waste range of calls they use to communicate with each other. Their main predators are eagles and jackals.

They usually have up to four pups in a litter, usually three. They can reproduce any time during the year. Being social animals, they have some rules within the group. 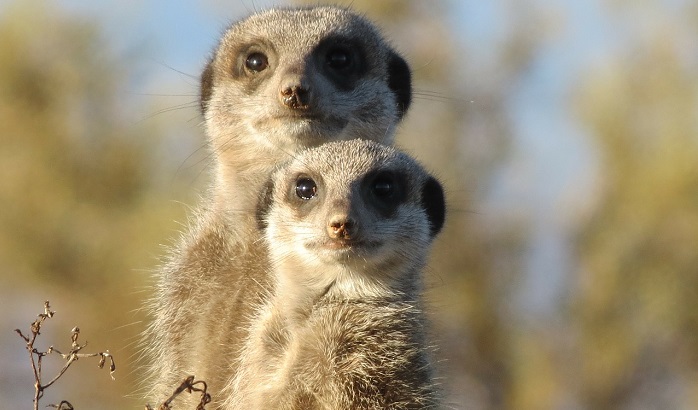 Usually the dominant couple, the alpha male and female have the right to mate and kill the pups which aren’t theirs to ensure the survival of their young.

The dominant couple can also kick out of the group the mothers of such offspring. These evicted females form new meerkat groups when they join a group of males.

Female meerkats have the ability to recognize the odor of their relatives which is very important for their cooperation, as well as avoiding inbreeding among relatives.

Meerkats live in large underground burrows with many entrances. They leave their burrows only during the day.

They are very sociable animals and they are always in a group. The individuals of the same group groom each other on a regular basis.

They also babysit the young individuals. Females who never had offspring often produce milk to feed the young of the alpha pair. They protect the young and even endanger their own lives. They take them into the burrows when signs of danger appear.

The dominant pair often marks their subordinates with their scent as an expression of their authority.

These animals sometimes share their burrows with mongooses and ground squirrels.

What does a Meerkat Symbolize?

The meerkats are very social animals, and sociability is one of their main characteristics.

The Meerkat Meaning as a Spirit Animal

The Meerkat totem can have many different meanings. Here are some of them:

Community and groups.  Meerkats live in large groups and they enjoy it. This totem is teaching you of the importance of communal living and help between the members of a community.

Authority. The dominant couple in a meerkat group demonstrates its authority in many different ways. This totem animal is teaching you to respect yourself and establish your authority in situations when it is needed.

Cruelty. Meerkats sometimes demonstrate extreme cruelty, such as by killing the offspring of a non-dominant couple. If this is your totem, you might be cruel sometimes and this totem teaches you to get rid of this trait because it doesn’t serve you.

Collaboration. One of the meerkats’ main characteristics is the collaboration between the members of the group. This totem is teaching you of the importance of collaborating with the ones who are close for the benefit of you all.

Awareness and alertness. Meerkats are known for these two traits and as your totem they share these characteristics with you, making you alert and ready to avoid any kind of threat and danger.

The Meerkat as Your Totem Animal

If the meerkat is your totem, you are most likely a very sociable person, and you find it difficult being alone.

You often have the need to belong to some group and you usually are a part of one.

You respect hierarchy and you don’t mind putting efforts for the benefit of your social group.

You are alert and you know how to spot danger in time so you can avoid the consequences.

What if the Meerkat Appears in Your Life?

When the meerkat appears in your life, that could indicate some danger is approaching and the need to be aware and alert.

This totem animal could make you realize that you need to respect the hierarchy in your social groups and not be angry about it.

This animal could be a sign that you need to be on cautious and alert about someone.

When to call on Meerkat?

You should call on meerkat as your spirit animal when:

Dreams about Meerkat – Interpretation and Meaning

A meerkat appearing in your life could be a warning about an approaching danger and asking you to be prepared to try to avoid the potential consequences.

This animal in your dream could also be a sign of some social gatherings you will soon attend and enjoy.