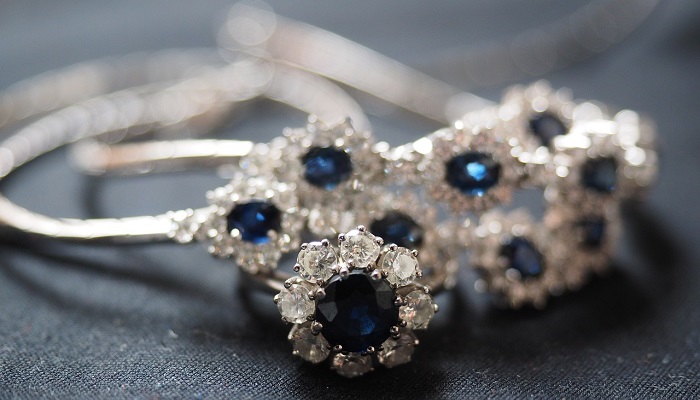 Sapphires are precious gemstones and are a variety of the mineral corundum. Sapphires are usually blue, but they also exist in pink, yellow, orange and green color.

These stones are very hard and they are the third hardest existing mineral, the diamond being the first and the moissanite the second.

They are found mostly in Eastern Australia, Sri Lanka, Burma, Thailand, Madagascar, East Africa, as well as in North America. They are often found along with rubies. Kashmir sapphires are the most prized among all other sapphires.

Sapphires are usually worn in jewelry. Their beautiful color has amazed people for centuries, and the love for these beautiful stones is still as strong as ever.

The most known is the navy-blue variety.

Sapphires were considered as sacred stones since antiquity. The sapphire is a stone with a prominent role in many cultures and religions around the world. King Solomon and Abraham wore sapphire talismans.

According to the teachings of Judaism, the stone tablets containing the Ten Commandments which were given to Moses by God were made of sapphire stone.

The Ancient Greeks wore sapphires when they were visiting the famous oracle at Delphi. The Indians offered sapphires to their gods as their gifts. In the middle ages, sapphires symbolized faith.

Buddhists also value sapphire as a stone which has a calming presence and eases meditation and prayer.

Sapphires were praised and valued among royalty, religious people, as well as many influential and famous people around the world, since ancient times.

Sapphires were also attributed many powers since ancient times. Sapphire was considered able to unveil deceit and treachery. 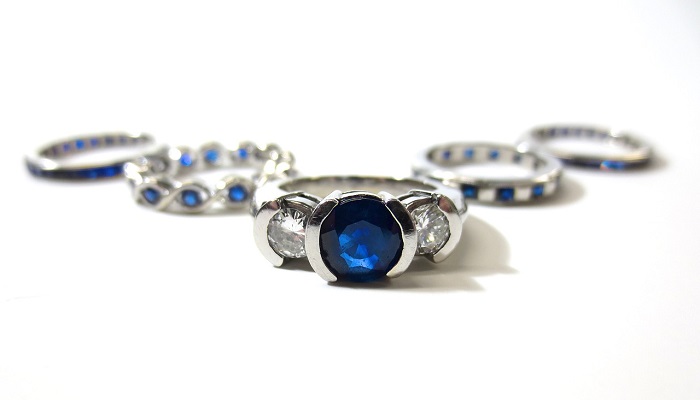 It was also given supernatural powers of being able to protect the ones wearing it from poison, the plague, or some other illness. Sapphire was also considered a protective stone against black magic attacks or curses.

This stone is stimulating the Third Eye Chakra and the Throat Chakra. It is beneficial for calming the mind and enabling the wearer to focus on their goals. This stone helps release tension and undesired thoughts. It helps develop your intuition and spirituality.

The blue sapphire is considered a stone of love, fidelity and commitment.

The sapphire is a stone which also helps the person wearing it to reach a deeper understanding of oneself. It clears the mind and enables a person to think clearly.

Sapphire is often given as a gift by lovers, aiming to ensure the lasting of their bond and attachment.

The sapphire helps in building confidence and a positive mindset.

These stones can help us release our emotional blockages which prevent us from getting what we desire in life. They are a great stone for treating depressive states and lightening up the mood.

Sapphire helps to restore balance inside the body but also balances our life circumstances.

Blue sapphire especially helps people who are easily influenced and discouraged by the opinions of other people, and the ones who need to build their self-esteem. It is advisable that these people carry a blue sapphire around or wear it as a piece of jewelry, and that way they can get the most of its benefits.

The sapphire also helps with communication issues and encourages us to express our opinions and knowledge openly.

This stone encourages people to begin pursuing some goals or dreams they considered were impossible to achieve, or where they weren’t given support to achieve them.

Sapphire Meaning in the Bible

Sapphires are mentioned in the Bible many times, mostly in the Old Testament, but in the New Testament as well. In the Bible, they symbolize something precious and of great value.

In the Old Testament, the sapphire is mentioned in The Second Book of Moses, The Exodus. The Exodus tells about the Israelites leaving their slavery in Egypt, led by the power of God and by their prophet Moses.

The Israelites cross the desert and wilderness of Egypt through the Mountain Sinai. There, God gives Moses the tablets with the Ten Commandments.

In Chapter 24 of the Old Testament’s Book of Exodus, in verse 10, the pavement under God’s feet (who apparently appeared in visible form) is described as made of sapphire: And they saw the God of Israel: “And there was under his feet as it were a paved work of a sapphire stone, and as it were the body of heaven in his clearness.”

Each jewel represented a different tribe and their names were engraved on these stones. The Book of Exodus, chapter 28, verse 18 and chapter 39, verse 11, say: “and the second row shall be an emerald, a sapphire, and a diamond”.

Sapphires are also mentioned in the Song of Solomon. The Song of Solomon is a unique part of the Old Testament. It talks about romantic and sexual love between two lovers and celebrates it.

In Chapter 5, verse 14 of the Song of Solomon, the woman yearns for her beloved and says among other things: “His hands are as gold rings set with the beryl: his belly is as bright ivory overlaid with sapphires”.

Sapphires are mentioned as foundation stones in the Book of Isaiah of the Old Testament, in the story of restoration of Zion (Jerusalem) after its destruction, chapter 54, verse 11: “O thou afflicted, tossed with tempest, and not comforted, behold, I will lay thy a stones with fair colors and lay thy foundations with sapphires.”

The Book of Lamentations, of the Old Testament, talks about the destruction of Jerusalem and its miserable condition. Chapter 4 of this book talks about the pitiful state of the city and the people because of their sinful actions.

The verse 7 of this Chapter says: “Her Nazarites were purer than snow, they were whiter than milk, they were more ruddy in body than rubies, their polishing was of sapphire:”

And the verse 8: “Their visage is blacker than a coal; they are not known in the streets: their skin cleaveth to their bones; it is withered, it is become like a stick.”

In the Book of Job of the Old Testament, sapphires are mentioned as one of the earth’s treasures. Chapter 28, verse 6 says: “The stones of it are the place of sapphires: and it hath dust of gold.”

The verse 16 also says: “It cannot be valued with the gold of Ophir, with the precious onyx, or the sapphire.”

The sapphire was also mentioned in the Old Testament in the Book of Ezekiel as a precious stone used as an ornament in the throne of God.

Chapter 10, verse 1 also says: ”Then I looked, and, behold, in the firmament that was above the head of the cherubims there appeared over them as it were a sapphire stone, as the appearance of the likeness of a throne.”

Chapter 28 of the Book of Ezekiel talks about the fall of the cities Tyrus and Sidon and mentions sapphires as a part of the adornments of the king of Tyrus.

The verse 13 of this chapter says: “Thou hast been in Eden the garden of God; every precious stone was thy covering, the sardius, topaz, and the diamond, the beryl, the onyx, and the jasper, the sapphire, the emerald, and the carbuncle, and gold: the workmanship of thy tabrets and of thy pipes was prepared in thee in the day that thou wast created.”

In chapter 21 talks about the new city of Jerusalem. In verse 19, it describes the second foundation of the city wall made of sapphire: “and the foundations of the wall of the city were garnished with all manner of precious stones. The first foundation was jasper; the second, sapphire; the third, a chalcedony; the fourth, an emerald.”