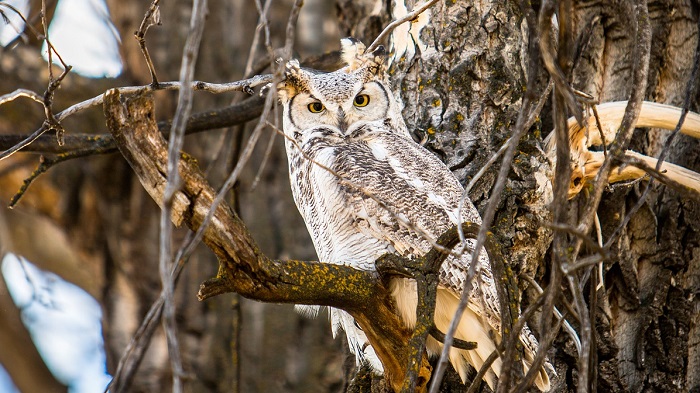 Owls are unique looking night birds of prey, which are related to nighthawks. It is estimated that around 135 species of owls exist today.

These birds feed on insects, rodents, lizards, rabbits, squirrels, and other small and medium-size animals.

They are known for being almost inaudible while flying, an ability which they use to approach their prey without being noticed even at a very close distance.

They build their nests in ruins, tree holes and even in tall buildings.

They are well known for their characteristic hoot, which resembles moaning.

Owls have characteristically large heads. Some owls have ear tufts, and all have a circle of feathers around their large eyes. Their eyes are so big, that they occupy almost half of their heads.

Their feathers are constructed to enable their silent flight towards their prey. They have a powerful night vision, which enables them to spot their prey in the darkness.

They also have an unusually sharp hearing which is another additional ability, helping them in their hunting. Their hearing is considered up to four times more sensitive than the hearing of cats.

They also have unusually powerful claws which they use to grip the prey tightly so they wouldn’t lose it while flying over to their nests to eat it. Their beaks are also hooked, which enables them to tear their prey with ease.

These birds have average intelligence, but nonetheless, they are considered a symbol of great wisdom and knowledge.

Because of their abilities, different symbolism is related to them. 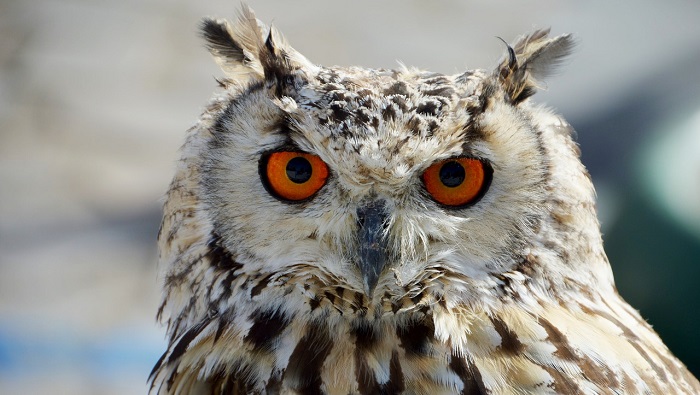 Some ominous meanings are often ascribed to these night birds. Owls are known throughout the world as messengers of death.

They have been ascribed that role mostly because of their nocturnal activities and the ability to move almost invisibly. They are also a symbol of ancient knowledge and wisdom. The owls sometimes symbolize the wisdom of a person’s soul.

On the other hand, owls have an excellent night vision and they know perfectly well what is hidden in the dark. Because of that ability, owls are considered symbols of hidden knowledge, magic, mysteries, darkness, the underworld, and the world of spirit, which is something most humans don’t have relations with and have a fear of.

The owl symbolism is also related to the moon, fertility, and feminine energy. In relation to that, the owl symbolizes the cycles of the moon and renewal.

Many myths and legends refer to the symbolism of the owl. In ancient Greece, the owl symbolized the goddess Athena, which was the goddess of war and wisdom. In the myth about Athena, the owl sat on the goddess’s blind side, to enable her to see the whole truth about matters.

That is why the owl was considered a symbol of higher wisdom in Ancient Greece. The owl was also considered a guardian of the Acropolis. In analogy to that, the Roman goddess Diana, who was the match to the Greek goddess Athena, also had the owl as her symbol.

The owl is sometimes considered a symbol of the Jews, because they have rejected Jesus Christ, and therefore have chosen darkness over light.

Owl Meaning in the Bible

Owls inhabited the Palestine valleys, caves and ruined temples and destroyed cities. Just as some other birds and animals of that time, they are mentioned in the Bible as unclean and unfit to eat.

The owl was considered the “mother of ruins”, and that was one of the reasons why it was mentioned in parts of the Bible where the topics were desolated and abandoned cities.

The owls in the Bible are a symbol of darkness, loneliness, desolation, isolation, abandonment, but these meanings simply arise from the context in which the owl is mentioned in the Bible.

The Bible doesn’t characterize the owl as good and bad per se.

The owls are mentioned several times in different parts of the Bible.

In the Psalms, the verse 102:6 says: “I am like an owl in the desert, like a lonely owl in a far-off wilderness.” These lines describe feelings of loneliness and desperation.

They describe a desperate person who is left alone and without anyone’s help in some unknown and unfriendly conditions. The only thing left is prey to God for help and salvation.

In the Book of the prophet Isaiah, chapter 13 talks about the prophecy of God’s judgment and the destruction of the town of Babylon. Verse 19-22 says: “And Babylon, the glory of kingdoms, the beauty of the Chaldeans excellency, shall be as when God overthrew Sodom and Gomorrah.

But wild beasts of the desert shall lie there; and their houses shall be full of doleful creatures; and owls shall dwell there, and satyrs shall dance there. And the wild beasts of the islands shall cry in their desolate houses, and dragons in their pleasant palaces: and her time is near to come, and her days shall not be prolonged.”

These threatening words speak about the owls in the context of the remaining living creatures after the destruction which God will put upon the town of Babylon. There will be no more humans there, only wild animals.

The Book of the prophet Isaiah, in chapter 34 also tells the prophecy about God’s judgment, vengeance and destruction of Edom.

In verse 11, the owls are mentioned again: “But the pelican and the porcupine shall possess it; also the owl and the raven shall dwell in it; and he shall stretch out upon it the line of confusion, and the stones of emptiness.”

Again, these lines talk about the consequences of the destruction and nothing left behind by wild animals and beasts in the ruins and devastation.

Here is another place in the Bible where the owls are mentioned in the context of devastation and abandonment, referring to them being birds which inhabit deserted ruins and cities.

The Book of Isaiah, chapter 34, verse 15 mentions owls in the same context again: “There shall the great owl make her nest, and lay, and hatch, and gather her young under her shadow; there shall the vultures also be gathered, every one with her mate.“

The chapter 43 of the Book of Isaiah, verse 20 mentions the owls once again:” The beast of the field shall honor me, the “dragons and the owls: because I give waters in the wilderness, and rivers in the desert, to give drink to my people, my chosen.”

In many parts of the Old Testament, the owl is described as an abominable creature, and compared to beings like dragons, crocodiles, bats, ravens, etc. The Israelites were given a command not to consume owls as food because they are unclean and unfit to eat.

In the Book of Job, chapter 30, verse 28-29, Job says: “I went mourning without the sun: I stood up, and I cried in the congregation. I am a brother to dragons, and a companion to owls.” In these lines, owls are used in relation to the feelings of mourning and desperation.

In the Old Testament, in Micah, where Micah prophesizes the fall of Jerusalem and Samaria, in chapter 1, verse 8, it is said: “Therefore I will wail and howl, I will go stripped and naked: I will make a wailing like the dragons, and mourning as the owls.”

Here again the owl is referred to in the context of mourning, mainly because of its distinctive hoot which resembles mourning.