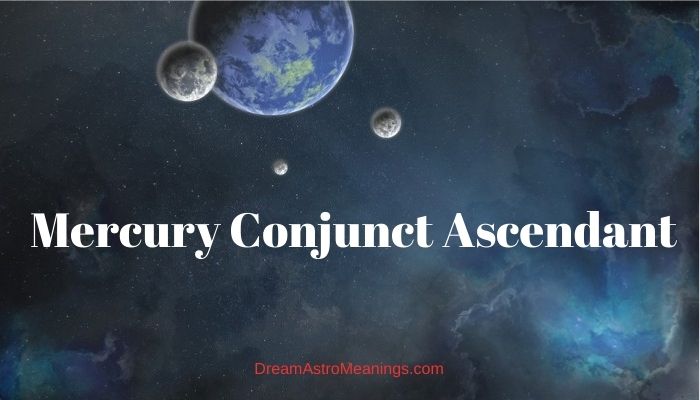 Mercury is the smallest planet in the solar system, it is closest to the Sun, and the second farthest from the Earth, and it is quite logical that the influence of Mercury on events on the planet Earth is immense.

In terms of quality, Mercury is cold and dry.

It is neutral, so it has neither beneficial nor malefic influence, and it largely depends on which sign it is in, as well as what aspects it builds with other planets.

Its neutrality is also present in the division of the planets into day and night, as well as male and female. In his seat he is in the signs of Gemini and Virgo, while in Virgo he is also exalted. His exile is in Sagittarius and Pisces, and his fall is in Pisces.

In the natural horoscope, he rules the 6th house. On a personal level, Mercury is a planet that governs the mental segment of a person’s personality, intellect, logic, perception, learning, speech, movements.

People with dominant Mercury have pronounced intellectual abilities. They are constantly thinking about something, analyzing something, researching or learning. They are said to have their brains working while they sleep.

Mercury governs logic, so these people are excellent students and have a strong memory ability. They have a strong gift for judgment, whether it is about other people or various events and situations. They are also very wise and cunning, so complete honesty can never be expected of them.

Their verbal abilities are highly emphasized. When this is said, it is not only meant that they are communicative, but also that they know exactly what they will, when and how they will say something.

In addition, they are very analytical, methodical and systematic, neat and meticulous. They have a strong sense of detail. Not a single little thing can miss them.

Due to all the above, depending on other aspects, but mostly people for whom Mercury is the ruler of behavior, are engaged in jobs that require increased mental activity, and the most common occupations are: linguist, writer, philosopher, mathematician, lecturer, journalist, presenter, manager , a merchant, an astrologer, or anything else that has to do with divination, and the like.

They often work two or more jobs at once, and usually generate revenue from two or more parties. These people love to travel, many of them strive to continue living elsewhere or even more often abroad. They also love books, media content, but also art.

They are very religious. If, for example, Mercury is very strongly placed in them, they have the gift to deal with divination, parapsychology, communication with the higher spheres of the Universe and the like.

It is interesting that when Mercury finds itself in a close aspect with another planet, it takes on its characteristics, imitating it.

This is reflected in people with accentuated Mercury in a way that they are able to adapt to each person and situation. Of course, and everything that is in the symbolism of the planets with which Mercury is in aspect.

Thus it is quite certain that the persons whose conduct is ruled by Mercury are great artists of manipulation.

Because Mercury is a planet that has no gender, as an accentuated planet in the map it symbolizes both homosexuals and bisexuals.

Poorly placed Mercury can indicate pseudo-retardation, mental limitations, problems in expression, too much need to logically explain every situation and event at all costs and bring it into a certain pattern, and it also gives cunning, envious people, liars, perverts, deceivers, and even those prone to fabrications that can do great harm to others, and thieves and counterfeiters.

On an interpersonal and material level, Mercury represents all young people, siblings, relatives, close friends, neighbors and neighborhood. Furthermore, Mercury is associated with:

In medical astrology, Mercury controls the brain, psyche, nerves, memory, tongue, shoulders, arms, hands, wrists, airways, and upper cervical vertebrae. Some of the disorders and diseases in the symbolism of Mercury are: madness, and so on.

A love of reading, a well-rounded education, career achievement, and victory in discussion often create a dominance of reason and practical gain at the expense of sensibility, intuition and empathy.

The mind is not only a talent for comparing facts and dates, but also an understanding of the world order and psychology on a subtle level, compassion and empathy.

When the owners of the Mercury-Ascendant conjunction realize the breadth of their mission to carry the light of enlightenment to the masses not only by demonstrating knowledge, but through a creative and tactful approach to the interlocutor, then the whole world will applaud them.

In addition, the study of foreign languages, psychology, pedagogy, computer technology will help to succeed.

Nervous tension is relieved by sports that do not require prolonged overstrain: table tennis, baseball, long and high jumping, race walking, and water aerobics. Lessons in a theater studio will help you relax and start trusting the world.

As talismans that enhance the positive energy of the connection, are shown: emerald, heliotrope, citrine, green jasper. They are especially powerful for unlocking the potential of Mercury in the 12th house.

For a more accurate selection of the amulet, the zodiac sign in which the connection is located is taken into account.

The owners of the Mercury-Ascendant conjunction are always in nervous tension and high-strung emotions, ready to rush into an argument and defend their beliefs, skillfully applying rhetoric techniques, and then wonder why the suitors ran away and did not call back.

The second mistake is the emphasis on intelligence, emphasizing its genius and originality. Male and female partners are afraid of the prospect of looking stupid against the background of such an outstanding person and prefer to find an easier companion.

This behavior is especially typical for the Ascendants in Virgo, Leo, Libra and Gemini.

Only those who are equal in mind or, at least, those who admire the native’s numerous talents, humble workers, who will provide him with comfortable conditions for sharpening his intellect, should become the chosen ones.

Practical interaction with the Mercury-Ascendant conjunction Love of reading, versatile education, career achievements and victories in discussions often create the dominance of reason and practical benefits at the expense of sensuality, intuition and empathy.

The mind is not only a talent for comparing facts and dates, but also an understanding of the world order and psychology on a subtle level, compassion and empathy.

When the owners of the Mercury-Ascendant conjunction realize the breadth of their mission to carry the light of enlightenment to the masses not only by demonstrating knowledge, but through a creative and tactful approach to the interlocutor, then the whole world will applaud them.

In addition, the study of foreign languages, psychology, pedagogy, computer technology will help to succeed.

Lessons in a theater studio will help you relax and start trusting the world. As talismans that enhance the positive energy of the connection, are shown: emerald, heliotrope, citrine, green jasper. They are especially effective for unleashing potential.

The native is logical, consistent and intelligent by nature, although later he hopes his intellect to perfection and loves to shine with knowledge in public. In communication, he knows how to adapt to the level of knowledge of the interlocutor, and in a dispute he can easily convince that the earth is square, just for the sake of laughter.

Any success of the owner of the aspect depends on intellectual activity, therefore, from a young age, you need to invest in a multifaceted education, read and communicate with different social strata in order to develop diplomacy and empathy.

They are sometimes lacking for an overly practical, cunning native, especially if the conjunction of Mercury is the Ascendant in Virgo or Capricorn together with Venus, or the planet of love in these signs forms opposition to it.

Mercury in the 1st house means increased sociability and talkativeness, when they do not climb into their pockets for a word, but they can harm themselves, and in the 12th house – a love of reading and philosophical contemplation. The native’s entourage is young intellectuals.

He will always look for friends, colleagues and partners younger than himself, hot and inspiring enemies of tradition, with whom it is fun to argue and playfully create a new reality. If there is support for Uranus, then it is a brilliant innovator-inventor.

The carrier of the conjunction of Mercury and the Ascendant draws strength and energy from conversations with people, oratorical speeches and even from disputes. Other characteristic manifestations of conjunction: curiosity, quick learning, the ability to make the impression of a genius professor even with minimal knowledge.

Confidence in intellectual superiority, arrogance, a tendency to communicate with the circle of the elect, especially if Mercury is in the 12th house; literary giftedness supported by Neptune; the gift of a detective with harmonious aspects with Pluto and Mars.

Negative ties with other planets, Chiron and Lilith, contribute to the transformation of an erudite Nobel Prize contender into a fraudulent adventurer who builds such ingenious enrichment schemes that the police cannot keep up with him.

Love and marriage at the conjunction of Mercury and the Ascendant. Aspect also affects the appearance of the native. Men and women with this compound give the impression of a perpetual motion machine.

They really are much more effective than others who manage to materialize their plans, are practical and are able to solve many issues at the same time, but career success does not always translate into personal relationships.

Connection is the most powerful and complex aspect of the horoscope, which cannot be unequivocally attributed to good or negative influences. It all depends on the level of development of the owner of the natal chart and the planets participating in the conjunction.

In any case, this is power in its purest form, like a flame that warms or burns from the inside, so you need to learn to control it.

The conjunction of Mercury and the Ascendant puts emphasis on the decisive role of erudition and eloquence in achieving success in society.