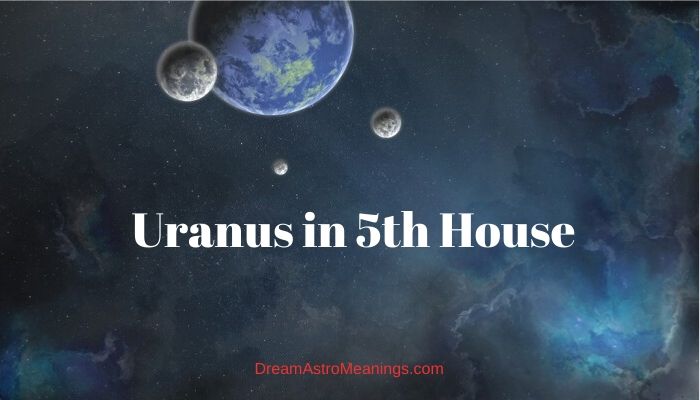 People study astrological houses in order to find out which segment of their life is likely to be in focus and what potentials they should work on, regarding a particular area of life.

Having Uranus in the Fifth House indicates unique approach to pleasures life has to offer, an innovative approach to career, social and romantic relationships.

Uranus is the planet of sudden changes and uniqueness, while the Fifth House is associated with pleasures, creativity, imagination, offspring and emotions.

Each astrological house represents an area of life, while planets inside houses make our experiences of these areas one of a kind.

The Fifth House is associated with creativity and with pleasures. Many would gladly name it ‘the house of pleasures’, as this is the field in which we would seek for fun and joy.

This field shows what we find the most enjoyable in life, what makes us happy, what kind of pleasures we search for in life.

This house has much to do with growth and creativity, both concepts that greatly contribute to the native’s sense, perception and experience of pleasure.

The fifth field is analog with the mighty sign of Leo and ruled by the Sun. This house is associated with our talents and our skills and imagination. It is linked to intellectual growth, education, our interests and versatility.

The Fifth House is also the house of knowledge, but not only knowledge we gain from general, formal education. It is about our experiences and with what we learn from it. This is a house that tells much about our creative potentials.

Our creative abilities lead us to our greatest pleasures in life. This field is also associated with procreation and with children. However, this applies in a wide sense. It is more than biological parenthood alone. Our students and followers could also be considered our children, in a figurative sense.

People with an emphasis in the Fifth House often feel like this; they perceive people they instruct, teach and guide as their own blood.

The Fifth House is associated with one’s social activity, hobbies and interests overall. Since this is the house of pleasures, romantic relationships take their place in here. This field indicates romantic affairs and relationships one enjoys before getting married.

Pregnancy, upbringing, taking care about children is associated with this hose, as well. The Fifth House is an emotional house, so to say.

Emotional satisfaction and fulfillment are associated with this field. We could also call it the house of passion, since passion is a powerful force intertwined with all kinds of concepts the Fifth House brings forward.

Passion comes with love for another human; passion inspires an artist and motivates a person to reach their goals. Without passion, life is hollow. The Fifth House could indicate your true and the strongest passions.

The Fifth House has its risks, of course. Passion and pleasures often have their downsides. This is the field of risky behavior and risky business, gambling and foolishness.

The experience of this field depends on the aspects of the planets inside the house.

Troublesome romantic affairs, trickery, adultery, problems with children are likely to take place, if there were heavy aspects.

Uranus was one of the ancient Greek gods; in fact, he was a primordial god, a personification of the sky. The myths say that Uranus was the son of Gaia, the Earth and that he had no father.

According to this cosmogony, the Earth came out of Chaos and she was the single life-giving principle. The feminine principle was the source of everything else. Gaia gave birth to Uranus, the sky, Ourea, the mountains, and Pontus, the sea.

As Uranus was the only one to encircle all the earth, Gaia merged with him, so he also became her husband. They had many children, ones we know as titans.

However, the myth says that Uranus did not like his children, that he hated them and did not want to allow them to see the daylight. He would rather keep them inside the Earth’s womb. Gaia was burdened by such activity and so she eventually came up with a cunning plan.

She made a gigantic sickle and asked her offspring if they would punish their cruel father. No one applied for the task, except one; they were too scared of Uranus.

The most cunning and daring one was Cronus, whom we also know under the name of Saturn, in Roman version. It happened that Uranus came to his wife, wanting her love, but Cronus was waiting for him, as well, with a blade his mother has given to him before.

He castrated his father Uranus. Uranus’ blood sprinkled the earth and from the drops Erinyes, also known as Furies, the deities of vengeance, were born and also Meliae, nymphs of the ash tree.

His genitals fell into the sea and the foal formed around them; from the foam, Aphrodite was born, the most beautiful of all the Greek goddesses. Gaia never merged with the sky again. Instead, she united with the sea and they had new offspring, the sea deities.

The myth of Uranus beginnings, his children and castration are origin myths, the myths related to beginnings of things. In Roman mythology, Uranus is Coelus, the god of the sky and the son of Aether, the deity of the eternal light.

In a Roman version, Coelus was the father of Saturn (Cronus in Greek myths), Vulcan (Hephaestus), Venus (Aphrodite) and Mercury (Hermes).

The planet Uranus is a distant, slow moving planet that is said to affect generations. It is a transcendental planet and the higher octave of Mercury.

Uranus is associated with things that were fresh, new, revolutionary, unusual and ahead of their time.

This planet represents everything that happens unexpectedly, without a warning, all that simply takes place in this moment. Uranus is a visionary planet, innovative, intense, tricky, revolutionary and rebellious.

As a planet that affects whole generations, rather than individuals, Uranus is associated with revolutionary movements, rebellions, radical changes on a bigger plan, strikes, activism and similar activities and events.

However, even if Uranus is a generational planet, if it forms strong aspects or sits in a prominent place in a native’s natal chart, it could be very influential. Those influenced by Uranus are people whose names will be remembered, for their eccentric ideas, their uniqueness and ingenious inventions.

Uranus is the herald of new age, the planet of modernity and destruction of obsolete concepts and old systems of value.  Uranus acts suddenly and it surprises.

The planet Uranus is associated with the power of the creative mind. Its symbol represents our spirit in close relation to the material. It means that we could use the power of our creative, inventive mind, in order to enrich our spirit and reach higher levels of existence.

Uranus crosses the limits and boundaries; it sets up new ones. Uranus is the planet of a liberated mind and wide horizons.

This planet is associated with eccentric people, versatile individuals, people with visions, geniuses and lunatics, both, occultism and metaphysics. Psychology is also associated with this planet.

People who are interested in unusual things, people of unconventional occupation are all children of Uranus. Some authors associate it with archangel Uriel, the angel of wisdom, illumination and light.

Uranus in the Fifth House – Uranus in 5th House

Uranus in the Fifth House indicates natives who enjoys life in a unique way. We could call them artists of life. Uranus is the planet of uniqueness and innovation and the Fifth House is about pleasure, knowledge, creativity.

They could find pleasure in things others would never associate with pleasures. These natives are very intelligent, innovative and interested in various subjects. They find their own ways into everything and that fills their mind and heart with great satisfaction.

Other people often fail to understand them. However, even if considered awkward and strange, these people are likely to be remembered.

Fifth House Uranus people dream about leaving a mark on the world, but not at the cost of anyone else. They are visionary people, ones who build the road others may follow, if they find their fantastic ideas interesting and inspiring enough.

They are architects of a new order or, at least, a new project. They also have the power of animating others and direct them towards making a positive change in life.

They are usually interested into design, web design, IT opportunities, but also show business and astrology. They are not very stable, when it comes to emotions.

At one moment, they feel as if they were instructed by some higher, divine powers, that they were destined to change this world by their inventive and innovative ideas. At other times, they fall into the bottomless pit of despair, believing everyone have forgotten them.

These are common struggles of incredibly intelligent, inventive, imaginative and creative people. They are unique and people often have no appreciation or understanding of their ideas.

It could make them feel down and hopeless, but they would gather themselves back again and seek for new ways to make their dreams come true. It is very likely that they would experience certain degree of fame in their life.

Perhaps one of the most interesting information about Fifth House Uranus people is that such a position of this rebellious planet could often bring these natives overnight success and fame.

They search for excitement and innovation all around, without being obsessed with fame and fortune; such a success comes uninvited and unexpected.

Some of them would find it amazing and feel great about it; others would find it too heavy load. It depends on the chart and the overall personality of the native.

Another interesting thing is that natal Uranus in the Fifth House makes the native search for a romantic adventure of a movie screen scale.

These natives need partners that inspire their creativity and feed their imagination. Their choice of partners would often surprise and even shock their friends and family.

They need a partner who would keep their flame alive, someone exciting, unique, one of a kind in many ways.

These natives enjoy life in a unique way, from romantic life, over social engagements, to job and career.