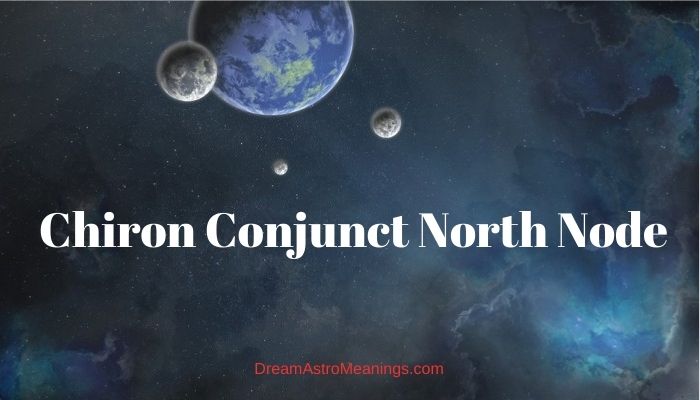 The Chiron controls our emotions and thoughts; hence, connecting nodes with the Chiron tends to generate strong emotions associated with sensation and imagination.

People with this configuration may have exceptional mental sensitivity, which can develop into the ability to predict future trends or be distorted and turn into superstition and extreme suspicion.

Chiron, or the nucleus of a comet, or an asteroid is a small celestial body, 250-200 kilometers across, whose orbit lies between the orbits of Saturn and Uranus, discovered in 1977.

Sometimes Chiron is relatively close to either Saturn or Uranus. Chiron’s orbit is unstable and the time of its revolution around the Sun fluctuates over millennia from 48 to 52 years, and the rhythm of its changes is not yet known.

For the twentieth century, the period of Chiron’s revolution around the Sun was taken as 50.6985 years.

In this regard, reliable data on the position of Chiron in the natal chart are available only for those born after 1880, and it is simply impossible to use it before 1850 – it may be in a different sign compared to the calculations.

Chiron’s position in the sign and the house denotes an area of ​​life where a person feels insecure, incompetent, figuratively speaking, and disabled.

Naturally, a person seeks to somehow change the situation and resorts to changes, not knowing the final result – for better or worse, this will change his life. Therefore, the main symbolic meaning of Chiron is choice.

In everyday life, some people avoid the areas indicated by Chiron in their natal chart, so as not to seem incompetent or even ridiculous.

Others, on the contrary, make every effort to overcome the feeling of insecurity and master perfectly the area of ​​life indicated by Chiron.

Strong, with many aspects, Chiron (Taurus, Sagittarius, Virgo, and Libra) shapes many changes in the life of its owner. A 40-year-old American woman with a pronounced Chiron for 20 years of conscious life changed 38 jobs and more than a dozen professions, for which she got into the Guinness Book of Records.

Many “Chelonians” did not immediately find their place in life. Chiron is strong among those who have chosen art, music, secret services, and medicine as their profession.

It shapes success in professions that require immediate response. A strong Chiron is necessary for pilots, astronauts, chess players, and scientists – cosmists.

Chiron was recognized by modern astronomers in 1977, although it was known to the ancients as early as the 3rd century (it was called “Centaur”, “Gandharva”).

This planet is located between Saturn and Uranus and provides communication between the September planets and the higher planets. The cycle of his circulation is 50.7 years, in each sign of the zodiac Chiron is 4.2 years. Chiron personifies justice, balance, equality, peace.

A Chironian can be immediately recognized by a kind of duality and paradoxical behavior, he has a rare ability to manipulate contradictions, explore and combine opposite principles, he is not familiar with the gap between the desired and the actual, he is able to show very great flexibility and look at any situation from the point of view of the enemy.

There is something demonic in the appearance of the Chironian: “neither day, nor night, nor darkness, nor light.”

Chiron comes into force when it is required to resolve any contradictory, conflict situation.

Therefore, people with a strong Chiron will most likely be able to achieve success in those areas where instant orientation and adaptation is required – astronautics, mountaineering, speleology.

At the household level, this person can benefit from being between two warring factions, can live in two houses, in different cities.

In the worst case, in the consciousness of a person, Chiron gives a shift in moral and ethical norms, a substitution of the concepts of good and evil, gives one for another, offers dual life situations: supposedly there is no light without a shadow and good without evil (although this is true only for the physical plane, but not for the highest spiritual level).

The Nodal Axis or the Lunar Node Axis, which connects the points of intersection of the lunar orbit and the ecliptic, is an area of ​​synthesis of the Earth-Sun and Earth-Moon relationships.

The fact that the interrelationships of the Sun (consciousness), the Moon (life) and the Earth (form) are concentrated and combined at the points of the Lunar Nodes determines their most important significance in astrology, which, unfortunately, often turns out to be hidden behind mystifications or simplified interpretations within the framework of dual logic. …

The Lunar Nodes, as points of unification of all these meanings in their interaction, represent an area of ​​special conditions for the manifestation of the main principle of creation in earthly reality.

Nevertheless, as mentioned above, the lunar nodes are the points of intersection of the orbits.

The orbit of motion of a celestial body represents the entire set of its possible positions, and, accordingly, the entire set of options, a kind of huge field of possibilities for manifestations of the planetary principle.

That is why the concept of the orbit of everything is related to collective processes.

When connecting the North Node with the Chiron, a person’s imagination is enhanced; his mind is strong and stable, his psychic sensitivity is accurate, and his impressions are authentic.

This makes a significant contribution to the development of creative talents. In whatever House this connection is located, it strengthens the House and all the spheres that it controls.

This configuration often brings happiness and wealth if it is located at the top of the map. The Chiron is a feminine planet and, having received an impulse from the North Node, brings positive feminine qualities or gifts in professions that are designed to please women.

This standing gives an understanding of feminine nature and sensitivity to the tastes of the general public. Therefore, this aspect is found in the horoscopes of many beauty queens, fashion designers, as well as artists and dancers.

It is very important to have support from the mother’s figure; as a rule, the person receives maternal support.

People with this aspect are called to nourish and nurture other people, and sometimes they do it on an amazing scale.

Bearers of this configuration are capable of satisfying the whims of the public – many politicians fall into this group.

The north node stimulates a person’s ability to gain audience support. The owners of this aspect produce a hypnotic effect on the audience, which is an undoubted advantage in public and political life.

People around them react to their enthusiasm, and the excess of emotional strength allows them to easily cope with crowds and large masses of people. They just like the assembled audience. They can increase their popularity; perhaps it is a reward for their generosity to other people in the past.

And here are two more names that have remained in people’s memory as an example of how easy it is to abuse heavenly gifts. These are Jim Jones and Charles Manson.

However, we can clearly find some circumstance aggravating this configuration in the last two persons. Jones has an eccentric Uranus conjunct the Chiron and the North Node at the very bottom of the chart, and Jupiter in the Seventh House squares this conjunction.

As for Manson, the Chiron’s conjunction with the North Node squares the Ascendant / Descendant axis, as well as Mercury and Jupiter on the Seventh House cusp. Due to the fact that these people misused their popularity, their karmic debt has grown significantly.

When connecting the South Node with the Chiron, inevitable difficulties often arise in relations with women, especially the mother, although there can be a very strong psychic connection with her.

These people have great difficulty expressing emotions, mainly because it is very difficult for them to express their sensitivity, which makes them outwardly much colder and more detached than they really are.

It is not so easy for them to get the support of others, so they feel lonely and have to rely only on themselves.

It is extremely difficult for them to lose their beloved. They have an unusual mind and a distinctive way of thinking.

These people are characterized by high anxiety – sometimes fraught with mental disorder or flowing into phobias.

Many owners of this configuration are very uncomfortable dealing with a crowd of people. They may have memories of difficult crowd experiences during previous incarnations.

The soul of the carrier of this configuration works to strengthen and balance its own emotions, stabilize the mind and the ability to cope with the impressions received.

If they are deprived of impressions, they may become carried away by unhealthy occult practices.

In some cases, the influence of the South Node destroys the sensitivity of the Chiron, giving birth to a cruel and destructive personality.

If this connection works positively, then it provides a sublime mindset that allows you to touch the mysterious work of the universe.

The Chiron is one of the luminaries that bestows health, therefore the Chiron in conjunction with the South Node can manifest itself in the form of health disorders or a reduction in life expectancy.