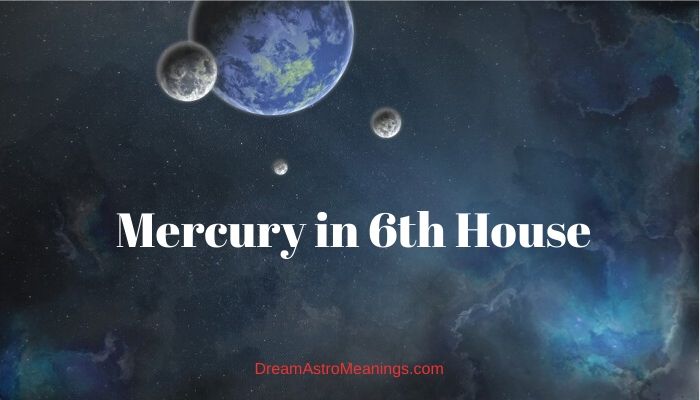 Each part of your natal chart is like a precious piece of the complex pattern that represents your life.

Planets in houses are of great importance, if you would like to learn about your astrological destiny.

Houses represents fields of life and the planets inside them would determine the way you are about to experience different areas of life. What is the Sixth House about?

The Sixth House is the house of gist and the key term to this field is duty. This is one of the cadent houses and analog with the sign of Virgo. The Sixth House is associated with work, health and one’s habits.

This is the house related to business and everything and everyone depending on you. This field is about services you offer to others and the house of routine. Everything that is a part of your daily life falls under the jurisdiction of the Sixth House.

One’s clothing and the way he or she wears it, hygiene, diet and eating habits and everything that has to do with one’s health is associated with the Sixth House.

The sixth field is associated with your sub consciousness and with your ability of adaptation. The Sixth House brings concepts of health and of work into a close connection. This is not a particularly pleasing field.

The Sixth House is the house of enmity and all sorts of inconveniences, especially regarding one’s workplace and working environment.

This is the field related to enemies, rivals, and cruelties in everyday life, unfortunate events, accidents, disturbances, worries, separation, suspicions, hits, damage and everything related. This is the field associated with injuries and wounds, breakage.

This house of sensitivity, contagion and everything has to do with the autonomic nervous system.

From a psychological point of view, the Sixth House is associated with fears, anxiety, personal problems, vices, negative thoughts, mental disorders and illnesses and generally everything that has a negative effect upon human mind and psyche.

From a physical angle, this house is associated with defects, damage and all kinds of physical injuries. When it comes to social aspect, things do not get much better.

From a social aspect point, this is the house of actual, real enemies; the field associated with everybody who has ill intentions, thieves, people who set obstacles and make trouble. In a wider sense, rivalry and sports competition are associated with this house.

Each activity that requires a spirit of a competitor has to do with the Sixth House.

Some astrologers point out that the nature of Mercury, the ruler of the Sixth House, and Mars are much closer than we think. This suggests it makes sense.

Generally speaking, the Sixth House is the field of obstacles, struggle, debts and all sorts of aggravating circumstances.

In a wide sense, this field is associated with the working environment, daily obligations and duties, stress, tension and exhaustion. However, there is a bright side to it.

Since it has to do with illness, this field also has to do with healing, medicine, biology, wellness, healthy diet, exercise, laboratories and everything else that has a healing purpose and effect.

Youthful and agile, clever Mercury or Hermes was an ancient deity of merchants, travelers, thieves and tricksters. He was the messenger of gods, in Greek mythology, and he also carried the souls of the dead into the underworld, to Hades.

The planet Mercury is the smallest one in the Solar system and also the closest to our brightest star.

Mercury is not that far from the Earth, if we take it from an astronomical and also astrological point of view.

Being closest to the Sun, Mercury does not take much time to close its path around it and so its energy is considered changeable and very flexible.

Mercury is a neutral planet, neither masculine nor feminine, neither a night nor a daily planet. It is neither a malefic nor a benefic planet.

However, its changeable energy makes Mercury highly adaptable; in astrological terms, Mercury easily adjusts to any planet it forms a strong aspect with, imitating its quality and nature.

Mercury is the ruler of Virgo and Gemini sign and exalted in Virgo. Its natural house is exactly the sixth field, which we are going to discuss later on.

When it comes to personal astrological readings, Mercury represents our rational self and our logic; intellect and mental activity are under Mercury’s influence. Mercury is responsible for our rational, realistic and genuinely logical approach to things in life.

Clever and curious, god Mercury was considered the smartest of all the gods. Similarly, astrological Mercury plays a role of a smart advisor to the Sun.

The Sun is our Ego and Mercury helps it to see things clearly and to use logic, since you know how Ego may be led astray by irrational ideas, fantasies and else.

Mercury is quick-witted and very direct. It is associated with communication skills and with education, learning and information.

The Cunning and the Wise

When we say communication skills, it should be taken in the widest sense possible. It is not only about your rhetorical skills, but also about your ability to communicate any message, to yourself, as well to the others.

Writing, speech, non-verbal communication also have to do to this little Sun’s companion.

Mercury is associated with perception, motion and movement, curiosity and cunningness. People with a dominant Mercury are very cunning, but also wise.

A dangerous combination, one might say. These people are not to be trusted, some would add.

Well, it is true that a gift of both wisdom and cunningness may make them master manipulators, but these people generally do not have bad intentions towards anyone. They are very easygoing and bright and their company refreshing.

However, being always on the run and often emotionally detached, they are not amongst the most reliable people there.

Mercury dominated individuals are precise, neat, quick and practical. They have a systematical and analytical mind and their heads are like an archive of tons of info, perfectly sorted out.

They are masters of multitasking and they are well informed about all the recent events. They feed on novelty and enjoy widening their horizons. They learn through practical experience and also enjoy studying, reading, researching and exploring. They are often passionate travelers.

These people enjoy meeting new cultures and traditions, exploring faraway places and talking with people from all around the world.

They are not particularly emphatic and compassionate; they approach the world and the people with a nomadic scholar’s mind. They want to understand the world and as long as there were new things to discover, they will be happy.

Fortunately, there is always something new and these ones know how to find it.

Most of them are talkative, but that is not a rule; some of them have a better use of a written word.

In any case, Mercury people are friendly and approachable, with a good sense of humor, self-confident, though benevolent and non-aggressive. They have an amazing eye for details, so they could hardly be tricked.

In addition, it makes them efficient in things they do. They enjoy all the occupations and interests that require dynamic mental activity.

Most of Mercury-dominated people would find themselves within the sphere of philosophy, linguistics, education, research, science, anything that has to do with information and media, such as journalism. Merchandise and tourism are also their things.

In addition, many of them are very interested into communication on a higher level; they enjoy astrology, parapsychology, religion, even divination. Many of them are artistically inclined, as well.

Mercury in the Sixth House indicates a quick-minded native, curious, clever and bright. This is a person with an incredibly analytical mind, with tendencies towards perfectionism.

People with Mercury in the Sixth House are marked by a systematical and a scientific approach to life.

They are intelligent, clever and ready to discover the patterns and the logic of things. They are very cautious about making conclusions and statements, since they would first inspect the subject to the last detail.

That said, these individuals have an amazing eye for details; they analyze every aspect of a subject, view it from all the angles, dissect it and turn into the tiniest particles, so that they could get all the needed facts and proves about it. They reconnect the things and make a solid, well-argued conclusion.

These people are in search of the truth and they are ready to face it. They are possibly the bravest people when it comes to facing the truth.

No matter how cruel the reality, they are ready to look it in the eye. These people are very practical and lively; they learn from immediate life experience.

Since their minds are quick, rational and logical, they easily take lessons out of any life situations, without any regret or complaint.

When faced with difficult situations, they do not let their emotions take over. Instead, they trust their ratio.

Life teaches them how tricky emotions could be, how deceitful and deceptive, so they see not to rely on their feelings. They feel insecure if trusting their emotions; the reason provides a solid ground. If they could explain things logically, they feel content and calm.

That is also the reason why these natives often try to rationalize each emotion. This could, indeed, make them appear distant and cold.

This also makes them cautious, observant, careful not to let emotions take over. They could be very hard to reach emotionally and they are reserved.

They do not let seductive dreamland fools them; at a very first sign of such a thing, they raise the bridge, close the gates and try to approach the situation rationally. They have an extremely realistic view on life.

In fact, Sixth House Mercury people focus all their energy and attention on work. They are interested into practical things of material value.

They use their brilliant intellect, amazing communication skills and rational mind in order to achieve long-term material stability. They do not act on a whim nor they are interested into short-term fun and pleasure.

They want perfection, sound sleep and stability. Many Sixth House Mercury people find their career and job the most important thing in life. They are usually interested into working in the field of communication.

These people have a high self-esteem and they highly value their own work, so be sure they will charge for it.

They do not do things for free, not that much because they were greedy, but because they are very dignified and proud of themselves. They believe good job should always be rewarded. In fact, they expect it.

They could be very successful, when it comes to career, but each case is different and it depends on the overall natal chart.

Mercury in the Sixth House – Synastry

Mercury in the Sixth House synastry overlay is associated with the ability of fruitful and efficient communication and exchange of information relating business, working environment and career.

This placement of Mercury is associated with the question of a healthy lifestyle and diet, which could greatly contribute to a relationship.

Mercury transit in the sixth field is associated with quick reactions, submission and plans regarding an additional source of income, a professional engagement.

The change of job could be possible during this period or the native would get an opportunity to have another job. It is advised to listen to others’ suggestions at the workplace.

During this transit, lungs and nervous system might suffer some kind of damage.

You will probably work more than it is healthy. During this transit, you should find a way to relax, heal, and take a break. Healthy diet and healthy life habits should definitely take place.

For the sake of your mental stability, you should see to follow the routine and bring order into your life. It is possible that during this period you be the one to advise others and help them with their decisions.