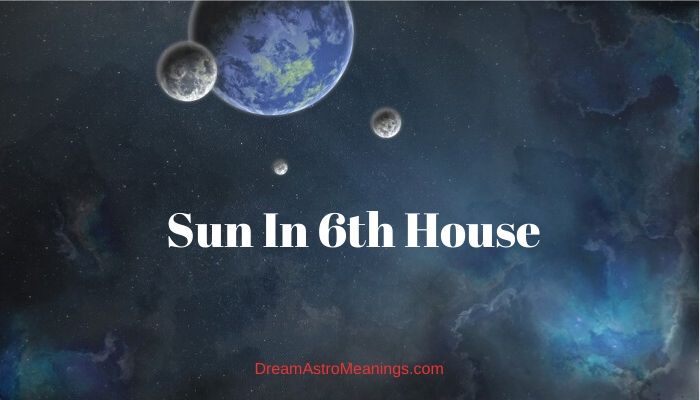 Astrological Sun is the first element to look into when reading an astrological chart.

It represents our self-consciousness, reason, inner, personal strength, active, manifesting energy of the self, our basic personality traits, character and temperament.

The Sun is one of the personal planets and it also defines one’s ruling sign.

The position of the Sun would greatly affect one’s personality and life path.

Each astrological chart is divided into twelve astrological fields, called houses. Each house represents a specific area of life.

The distribution of planets within these fields would affect the dynamic of different aspects of a person’s life.

Houses are divided into angular, succedent and cadent houses, each of them with specific energy and meaning.

Houses are also divided by essential elements and so we have Fire, Earth, Water and Air houses.

Angular or cardinal houses are the first, the fourth, the seventh and the tenth.

The Sixth House is one of the cadent houses, which are associated with the concept of learning, with one’s observations and thoughts and the dynamic of the process of learning.

People who have accentuated earth houses dwell within boundaries of the physical world. They search for a good ground to settle and satisfy their needs.

This astrological house is primarily oriented towards the professional life of an individual. It is associated with one’s workplace and working space, with the job, occupation and profession itself.

This house is about all the temptations and challenges that come along the way, concerning these. The Sixth House defines colleagueship, relations with superiors and with cooperatives.

In addition, this astrological house has much to do with the health of an individual. It has to do with one’s habits and diet, concerning physical well being, in the first place. Besides, the Sixth House also has to do with certain insecurities and troubles.

Although effects within the Sixth House could be very positive overall, this house could also cause troubles, especially related to the working environment.

The Sixth House is associated with fears, skepticism, shame and other feelings and sensations that are usually related to something happening in the professional area of life.

This house is responsible for troubles, arguments and conflicts at work and, as such, this house is also considered the house of enmity, fraud, trickery and hoax, with setbacks of all sorts.

Sun in 6th House – The Professional

Now, when Sun meets the Sixth House, it could have an amazing effect over an individual’s life. Sun in the Sixth House is associated with a character that is pragmatic, professional, dedicated, analytical, meticulous, diligent, focused and responsible.

This person is authoritative and has fantastic organizational skills. A person with Sun in the Sixth House is detail-oriented, perceptive and amazingly concentrated.

This person has a diplomatic attitude and he or she could see through situations very well. In addition, this is someone who values discipline, law and order above anything else.

Sixth House Sun person takes up a professional approach not only in the professional area of life, but also privately and socially.

For instance, he or she would manage household issues the same way as they would lead a business.

An individual with Sun in the Sixth House is ambitious and demanding. These people set themselves high standards and goals; often it happens they expect much from others, as well. They always see to respect and follow rules, they are disciplined and responsible, very dutiful people.

We could say that these individuals are the most satisfied when they find and/or get the desired job and engage with a desired occupation.

They see finding a suitable job their highest ideal. The job, we could say, makes their life meaningful and purposeful. This is expected, since the Sixth House is one of the Earth houses, with an emphasis on the material world.

One has to be cautious about this, for making the professional life your main (or only!) focus in life is not always a good thing to do. These people often define themselves through the job they do.

Sun in the Sixth House – Reputation and Status

This person would not stop until he or she finds a job that would allow them to express and use all their skills and talents, which is a reasonable and a logical thing.

They see to do the best and be the first in the occupation they have chosen. They also tend to reach high positions and their job should get them name and status.

Reputation and social recognition are very important to these people. A solid income is expected, of course.

These people want to be admired and respected for what they do and they want to have the option of influencing other people. The Sixth House is a cadent house, which implies this person must be a great workaholic.

It is true, but it does not mean Sixth House Sun person would accept any job, on the contrary. Not at all.

This individual wants an admirable job, worth of every respect. We could say they were in search for a ‘white-collar job’.

Sixth House Sun individual would not stand disrespect and manipulation. They themselves are dutiful, responsible and diligent; they would do their thing perfectly and they expect due praise and admiration.

Of course, they expect to be well paid for what they do and they would never accept less than what they have imagined or demanded. These persons would never sell their skills at a low price, regardless of the situation.

Sun in the 6th House – The Perfectionist

People with Sun in the Sixth House are perfectionists, at their work, but also in life. They have high demands regarding order, precision and diligence.

They demand so from themselves, but also from others; if they were the boss, you would never have the ability to fool around and neglect your duties and responsibilities.

These people have a strict attitude towards obligations and duty.

Professional ethics and order are of the highest value to these individuals. This person is extremely neat, analytical, organized and precise, detail oriented and focused on every little thing that makes a part of a structure. Nothing could miss their eye.

They have an almost obsessive attitude towards perfection, which could be something hard to follow, especially when it reflects in the private life.

Poor hygiene is also something that would drive them mad; they want everything to be brilliant, neat, clean and organized. In other words, these people are obsessed with control.

If it happens they get a sense of losing it, it could really shake them up and disturb them, especially if it concerns things they have invested great effort and time into something.

The thing that could really disturb them and make them feel very anxious and nervous about is losing control over something they have dedicated much of their work into.

If it happens that their work does not pay off or that things do not go the way expected, it could really get them out of track, much more than it would affect other people. They have hard times dealing with disappointment and failure.

Otherwise very calm and collected, in such situations they are prone to overreacting and drama, as they feel helpless and hurt. These people have a really difficult time admitting they were wrong about something.

It could even happen that they avoid telling the truth or, shockingly, they could lie to cover up their failure. They do so, because they feel ashamed and unworthy.

Sun in the Sixth House – The Manipulator

Although they would make a lot of drama over their failures, they, in fact, rarely become too discouraged. They do not give up easily. Moreover, their dramatic self-presentation could serve actually to mask their mistakes.

These people would present themselves in a glamorous way, dramatic, in order to be noticed. They are masters of communication.

These people are excellent spokespersons, as they know how to influence others through carefully chosen words and a dramatic, striking performance. They easily gain the desired popularity.

They are very insightful and have a fine sense of human interaction, so they would often use suggestive talk in order to get what they want. They perfectly manipulate conversations.

Yes, they sometimes have hidden causes for doing what they do. Since they are very skillful in games of speech and drama, no one could easily see through their intentions.

They generally do not wish harm to others, but would not mind manipulating them, if it leads to something they wish for. They could be selfish, in this regard, but not malevolent.

However, they make mistakes, as all of us do. Their incredible diligence and detail-oriented approach could be efficient on many fields, but it comes with a hole. They seem to miss out bigger things, being too focused on details.

It leads to wrong evaluation on a bigger plan, which could lead to a potential failure.

Sometimes they see only things before their eyes, being blind for everything happening all around.

Sun in the Sixth House in synastry creates a business-like relationship and it is commonly seen in actual partnerships of the sort. This is a position that has to do with roles of authority.

When one’s Sun is in other’s Sixth House, it means that one partner would be subordinated to the other. You should not understand this as a harsh submissive, slave-like relationship, but more of a business hierarchy.

If this was the situation, one partner would feel very dutiful and obliged and the other will be bossy. This is not necessarily a bad thing and it does not mean there has to be tension between partners.

On the contrary, these two are highly productive when together. The Sun partner is the most likely to become subordinate to the owner of the field.

Now, this does not have to be a problem, but greatly depends on personal characteristics of the Sun person. It could also happen the other way around, so the Sun person could become the ‘boss’.

This could, actually, be a very steady, stable and productive, easygoing relationship, as one would see to manage things in an organizational way, while other would be very helpful.

Although this position does not tell much about any romantic feelings, it could work very well in a romantic relationship, especially between married partners.

Other elements in your synastry would probably contribute to romance and passion between the two of you.

In any case, Sun in the Sixth House overlay could be a good ground for a stable relationship.