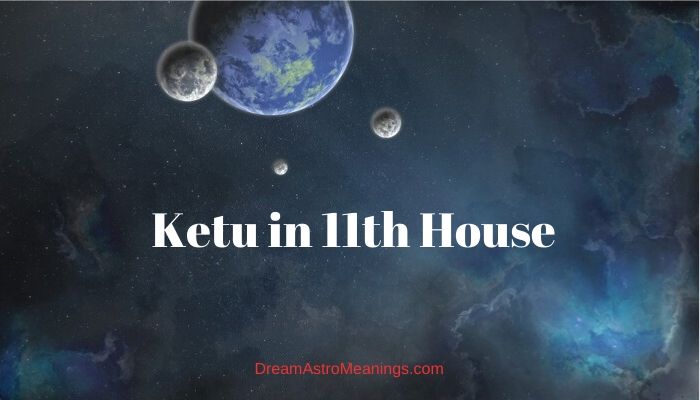 According to Hindu mythology, the dragon demon has once stolen the elixir of immortality from the gods.

The Creator has defeated the dragon and cut him into half. However, since the creature has already turned immortal, his two parts continued to live, apart from one another.

This is how Rahu and Ketu came to existence. Furious about the cruel destiny, they decided to take revenge on the cosmos.

The myth says that the Sun and the Moon reported the thief of the elixir to the Creator, so Rahu and Ketu swore to chase them to devour them. Since everything mentioned is allegorical, the process of devouring takes place in reality and we call it the eclipse.

Rahu and Ketu, the North and the South Lunar Node are astronomically points of the Sun and the Moon paths’ intersection.

The North and the South Node are not planets, although in astrological readings we treat them as such. They are imaginary planets, while actually they represent points on the chart, opposite to one another. Their significance in Vedic astrology is huge.

Rahu and Ketu are keys to our karmic journey. Although they are not analog to any of the signs, many describe them as similar to planets Uranus and Neptune.

Their influence is antagonistic and complementary, as they represent inseparable points. Lunar Nodes are our best benefactors, but also the greatest enemies. They are meant to teach us our karmic lessons, so it is very important to pay attention on their positions in a natal chart.

Through the North and the South Node, we learn who we were, who we are and who we are yet to become.

Modern astrology has been ascribing more and more importance to Lunar Nodes. Unlike eastern astrological systems, Western astrology treats these two points in a more simplified way, interpreting them in a dualistic fashion.

The North Node is, thus, considered the positive one, while the South Node is believed to have a negative influence. However, nodes have more complex role to play in each individual’s life.

They are not simply a good and a bad one. In fact, Lunar Nodes are both malefic ‘planets’, though Rahu, the North Node is more likely to be taken as a benefactor.

However, everything it gives us, it could also take back. When nodes present in their destructive mode, Pluto is like an angel in comparison to them. When they are good and giving, Jupiter, the lucky planet and a selfless giver, appears as a real scrooge.

However, Rahu and Ketu generally do not have much to do with the mundane. Their role is karmic. Rahu is quick, sharp, unpredictable, courageous, impatient and extroverted. Day is its period of activity. It awakes one’s sense of independence and liberty.

Rahu is a great motivator. It is associated with ingenuity and originality, with innovation and uniqueness.

Ketu is a different story. Ketu is subtle, strange, mysterious, and full of fog and illusions. However, it could also be aggressive and severe. Its domain is that of the night. Ketu is associated with spiritual needs, with one’s interest into secrets and with strong intuition. Sensibility and spirituality are tightly associated with the South Node.

Both Rahu and Ketu are responsible for unexpected circumstances and with changes.  We should not analyze them separately, but more as opposites we should find the balance between.

In Vedic astrology, Rahu and Ketu are believed to be more powerful than planets, mightier than all the stars together. They intensively activate houses they inhabit and affect planets they find inside the houses.

Of course, things are not that simple in reality. Whenever we read a natal chart, we have to take all the elements into account, regardless of how powerful some of them may seem alone.

The South Node, Ketu, known also as Cauda Draconis, the Dragon’s tail, represents an archive containing data from all of our previous incarnations. Besides that, it also represents our roots, our ancestors and our genetic material.

Ketu represents our karmic knowledge and all of the habits we have developed during our previous lives. It is like a bag we carry from one incarnation to the other one.

Along the way, we put new things inside, but we should also cast some away, which is a harder part.

Ketu offers an insight into previous incarnation’s decisions and activities; it represents our automatic responses to different situations in the current life.

We respond to these incarnations’ challenges by already established mechanisms, as an automatic reaction, without thinking through them. They simply take place by inertia, regardless of being good or bad for us.

The South Node offers us some kind of security; it is our karmic comfort zone. We all know how comfort zone could end up having a debilitating effect. It does not allow us to grow and develop other qualities. It seduces us with the certainty; if we play by Ketu’s tune, we feel safe.

However, that kind of safety could cost as progress. We need to invest great effort to work through our karmic lessons.

Ketu has its good sides and its overall effect would depend on its placement and the aspects, just as the case is with planets. Ketu represents our gifts, talents and skills and it has to do with spirituality. We could use them to our benefit.

However, if we fall for its comforting melody and surrender to its influence, we may end up losing identity, feeling depressed and insecure.

The Eleventh House is associated with different kinds of success and accomplishment in life. It is an indicator of different types of achievements, prizes, gains, plans and goals in life. In addition, it is also considered the house of friendship.

However, the Eleventh House is not limited to friendly relationships alone. It is also the house of romantic connections, especially those naïve, platonic and youthful.

That said, this field is also related to support and affection, to help and selflessness. This is the field that tells about one’s potentials regarding friendships and connections. It tells about one’s attitude towards friends and acquaintances and about all kinds of non-romantic relationships.

The Eleventh Field could point out things that you want the most in life. It is also the field related to humanitarian interest and activity.

This field is also an indicator of all the awards, recognition, acknowledgment and respect one would gain. It is the field of plans, dreams, desires and progress, the field of victory and success. It actually reveals ones capabilities regarding all this. The Eleventh House is also the house of rest, vacations, content.

Generally, the Eleventh House is a pleasing field, but your experience regarding it would depend on the planets inside the house, the aspects and more.

Eleventh House is related to social relations, to older brothers and sisters. It is the field of personal freedom, fulfillment of hopes, the field of generally good fortune, the house of liberty and innovation.

It also has to do with one’s accomplishments as a part of the group and the society as a whole.

Eleventh field has its negative sides, though. It indicates unexpected problems and troubles that could pop up out of nowhere and bring chaos into one’s life.

Ketu in the Eleventh House – Ketu in 11th House

South Node in the Eleventh House with North Node in the Fifth House leads to the karmic lesson on creativity. This native will spend a lot of time lost in thoughts, dreams and fantasies.

In previous incarnations, this person lived to fulfill personal desires. It is very different from having Ketu in the tenth House and living to prove yourself worthy of others’ expectations.

However, the magical, though fragile world of dreams has left this person too many promises that would hardly be fulfilled.

This person is an observer; from an early adulthood, he or she patiently observes the world and the people around. If not being lost in their dreamland, these natives spend most of the time thinking through behaviors and activities of other people.

These natives are very imaginative and inventive, to the point of being naïve. However, Eleventh House Ketu person also engages his or hers mental abilities into trying to realize their complex fantastical patterns in reality.

This person could never stop being stricken by the awkwardness of his or her own thoughts.

In addition to these continuous shocks, these natives’ romantic and naïve perspective makes them the most impractical people in the world. They are lost in their fantasies and they try to live them in real life.

In reality, they actually search for material that would help them build their new and new dreams. Through dreams, however, they also learn about life.

Eventually, these natives realize that the greatest part of their life is based on dreams and not on real life circumstances; they try not to see the latter, painting it with their fantasies.

Yes, they are escapists. As soon as they face the reality as it is, they search for models of people that remind them of their fantastical realm. They are also bent towards futurism and science fiction; well, towards everything except this life.

It leaves them with a continuous and ongoing anxiety. They try to blame various realistic things for that; the way their parents have raised them, their job or whatever else. However, the true reason is the void between their dreamland and the real life.

The gap is so huge that they cannot find the way to build a solid bridge and connect the two. Instead, they live in the dream realm, but reality pushes them over the edge.

Ketu in 11th House – From Dreams to Reality

They cannot understand why there has to be a gap and they try to jump over it, stretched between two worlds. They waste too many energy, being unable to build their own life in reality, without giving up of their fantasies.

Through the North Node in the Fifth House, these natives have to realize that the greatest gift to an individual is its creative mind, its ability to forge and style their own destiny.

Once the native starts this project of creation, he or she would realize that the life they live is the product of their imagination. The native has to go further ahead, overcoming the imaginary realm in a way that it becomes their channel of understanding the life, not their place of escape.

This person has to learn to be responsible for their dreams, taking into account everything that actually takes place. This native has to be careful about what he or she wishes for.

Dreams are like a bottomless well and this is something this person has to realize. Only then he or she will be capable of focusing on creation in real time. Once the native lets go the deepest personal dreams, he or she becomes capable of building their own destiny. We have said you should not give up your fantasies.

This process would only make one’s fantasies in balance with the reality. Giving your dreams up, does not mean you cannot have new ones.

One has to change the control over dreams. You should take them as a medium of understanding life, not an illusion to live within.

The key is the discipline and this person has to work hard to achieve it. Instead of surrendering to the realm of dreams, one should take the best out of it and use it into their own advantage.

The outcome of this karmic process is a harmonious life, good reasoning, creativity and satisfaction with and within the reality.