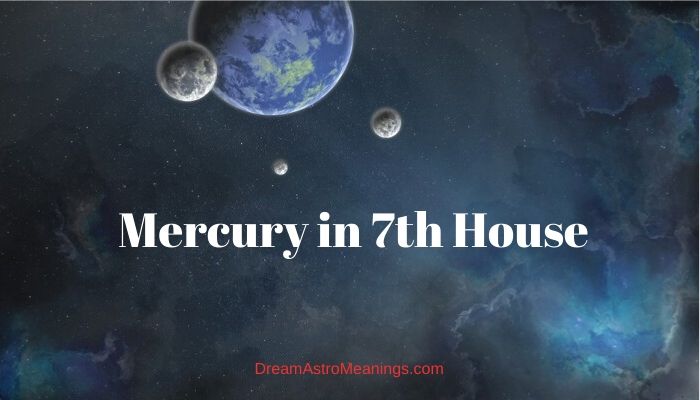 Astrological houses hide the key to understanding your life. How so? Each house represents an area of your life.

In a transit, they tell about a certain period. In any case, knowing your houses is powerful.

The more you know about your astrological potentials, the greater is the chance you could use them for real. We miss out many things simply because we do not pay enough attention.

An astrological reading could reveal things you usually overlook or take for granted. So, let us discover what astrological houses hide.

Today we talk about the Seventh House and the planet Mercury.

The Seventh House is the house of partnership and relationships. It is the opposite of the First House, which is associated with the self and with Ego. Amongst all the types of relationships, this house is focused on romantic relationships.

This is the field of marriage and divorce, of spouses and lovers, of romantic partners and dating, of breakups and new connections. In a wider sense, this is a field associated with partnership in general.

It has to do with business contracts and colleagueship, collaboration, law issues and else. It is also associated with the area of public relations and public engagement.

Interestingly, the Seventh House, following the sixth field, is also associated with rivalry, enmity and opponents, both known and unknowns, so it calls for observance and caution.

This house could reveal much precious information regarding all kinds of relationships, especially those of a romantic sort. Planets inside the Seventh House, as well as aspects they form with other ones could answer some very important questions.

Does your relationship have a potential to last or there is a great possibility for you to break up? Does your marriage lead somewhere? Are you likely to get divorced?

It could tell if the native is likely to have more than one marriage and else. The Seventh House could possibly answer these questions. The Seventh House is one of the angular or cardinal houses and it is analog with the sign of Libra.

The planet of communication, information and our rational mind, as taken from the astrological perspective, Mercury is the smallest one in the Solar system and also the closest companion of the Sun.

Mercury is not very far from our place in the Solar system, so it is considered a planet of great influence, regarding our earthly lives.

Of course, Mercury is distant, but in terms of astronomy and astrology, it is only Venus away. Mercury moves fast and is of changeable energy.

This planet is considered neutral, dry and cold in quality. Mercury is not a malefic, but it is also not a benefic planet. In fact, it imitates the energy of planets in connection to it. Mercury is neither of the feminine nor of the masculine principle.

Moreover, we cannot call it a night planet, but it is also not a daily planet. Mercury is associated with Greek Hermes, the messenger god and Roman Mercury, the god of merchandise.

Mercury is also considered the patron of travelers and all people of brilliant mind, including clever thieves and tricksters.

He was the smartest of all the gods, most commonly portrayed as a young, athletic male. Mercury wore winged equipment so he could move all around any time. In astrology Mercury is, indeed, associated with movement, communication, travel, with bright mind and quick wits.

Mercury is the planet that represents our rational mind and logical reasoning. It is the planet of perception, learning, curiosity and cunningness. People dominated by Mercury are smart, thirsty for knowledge, novelty and information.

They have a positive attitude towards life and are eager to know more. They are like a walking encyclopedia, full of interesting info about this or that. They absorb information from around the word and store it in their mind. It does not make them chaotic, on the contrary.

They could offer you information about various subjects at any time. They are very precise, neat and very efficient when it comes to solving problems. They learn from immediate experience.

People with a strongly positioned Mercury are very communicative and often present with fantastic rhetorical skills.

They enjoy debates and have an analytical approach to things. They are focused on details and finding solid arguments to defend their position.

Anything that requires a dynamic mental engagement excites them, but it also relaxes them. They could be amazing writers or journalists, great presenters and managers, scientists, mathematicians, philosophers.

They are also interested into arts and tourism. They are passionate about travelling! Not only that it satisfies their natural call for adventure, but it also satisfies their curiosity and thirst for knowledge.

They enjoy research, study, exploration and discoveries. They would travel to the most unexplored places and distant countries, in order to meet new people, new cultures and better to understand how things work. In addition, they enjoy sharing things they have learned about.

They are positive and have a good sense of humor, though they do not stand for particularly reliable or trustworthy people. Depending on the rest of the horoscope, their amazing Mercury qualities could become corrupted and turn them into manipulators and tricksters.

In addition, if Mercury was in bad aspects, they would have problem with communication and not an advantage when it comes to that. However, it greatly depends on the position of Mercury and the whole chart.

Mercury represents young people, education, schools, teachers, study. It is an intellectual planet, so to say. It advises our Ego, the Sun, to take up a rational and a realistic perspective.

Mercury represents all types of communication channels, from written words to non-verbal communication. Debates, conversation, presentation, media and careers related to media are associated with the planet Mercury.

Mercury in the Seventh House – Mercury in 7th House

Mercury in the Seventh House indicates a greater openness and interest into partnership and sharing life with someone. This native is open to cooperation, making compromises and talking through all the potential problems.

The position of Mercury in the Seventh House is associated with friendliness, eagerness to participate in communication with others, especially with the people close to the native. This could be of much use in the field of marriage and romantic relationships.

This native is ready to talk with the partner about everything, in order to improve the relationship and make things go smoothly. Mutual trust, understanding and tolerance are very characteristic for this position.

In addition, Mercury in the Seventh House contributes to fruitful connections and collaboration with people in the working environment, which could lead to success on a professional and social plan.

People with Mercury in the Seventh House are charismatic and usually possess amazing rhetorical skills, so others admire them, like them and appreciate their ability efficiently and openly to communicate their message.

This is an amazing gift and could be of great importance in terms of professional life.

In addition, it makes them very popular amongst people in general; their company is pleasant and inspiring.

Since the Seventh House is analog with Libra and Mercury is associated with communication, people with Mercury in the seventh field are natural diplomats and peacemakers.

They are guided by common sense and pure logical mind. They do not make drama and know how to act in critical situations.

These individuals are often the voice of reason when everybody else loses their mind. They take a balanced and calm approach to life, which is amazing.

People with Mercury in the Seventh House are logicians. They have an analytical mind and enough patience to observe the situation from all angles and to take all the details into consideration. They carefully analyze things before making any important decision.

However, they are not suspicious; they simply want to take the best out of the situation, without any unnecessary damage.

These people have amazing potential to have a balanced, harmonious and successful life, all thanks to their diplomatic, benevolent, patient, detail-oriented and overall positive approach to life.

They do not analyze things in fear of missing out something or because they suspect everybody and everything. They do so, because they want to do it perfectly and constructively.

Seventh House Mercury people are typically friendly, extroverted and easygoing. More than anything else, they value a live conversation. They enjoy exchanging opinions and information with others.

They are pretty tolerant and understanding, which makes them good listeners, not only excellent presenters of their own ideas. They learn much through conversation with other people.

These people really enjoy intellectual debates and large gatherings that have something to do with education, regardless of the subject in question.

For example, conventions and meetings where people discuss over certain matters are their thing. They are generally talkative, but they do not waste words.

Of course, all of this applies if the actual position of Mercury and its aspects were favorable.

Mercury in the Seventh House – A Talkative Partner

People with Mercury in the Seventh House are the talkative partner in a marriage or a relationship.

They enjoy leading the main word and they tend to take up the leading role in a conversation with the partner. They do so, because they feel the need to take care about every detail regarding their marriage, partner, relationship, home and else.

Be careful not to cross the line, since this behavior could appear as over protective and oppressive.

Although these people love to play a know-it-all role, especially in their romantic relationships, they are very direct and open when it comes to sharing their thoughts and feelings.

They strongly believe that partners should openly discuss any problem and that openness makes the base for a stable relationship. They are loyal, devoted and open about their feelings towards someone. In addition, they are ready to make compromises.

One interesting notion is that people with Mercury in the Seventh House often get married more times than once.

Perhaps their practical and logical mind has to do with that. They will not stay with someone unless they are sure about their feelings; unclear relationships cannot last for long.

If they realize they do not see themselves in a relationship (or a marriage) with you, they will say it and leave, very likely.

In addition, they usually fall for younger partners and people of youthful appearance and spirit.

Mercury in the Seventh House in synastry is a very good placement, since this combination is about the connection and communication.

It suggests there will be great understanding between partners as their ideas are complementary. They learn from one another and are very open to make deals and compromises. This is a position of understanding and tolerance, which is amazing.

Through open and diplomatic approach, couples with this position in synastry could successfully overcome minor difficulties without hurt feelings or confusion. They tend to be very open about their thoughts, opinions and emotions.

Mutual trust and confidence are the key to a successful relationship. If the rest of the synastry was in favor with this position of Mercury, it is a good sign.

Mercury in the Seventh House – Transit

Mercury in the Seventh House transit is associated with matters regarding trade and marriage.

Nervousness may take place, so it is of vital importance not to let it overtake, because you may get into unnecessary and painful arguments with your partner.

Try to avoid conflicts and debates, because sometimes you may not be right.

During this period, you will need someone’s support and a person you could share your ideas with. In fact, this could be a period of success.