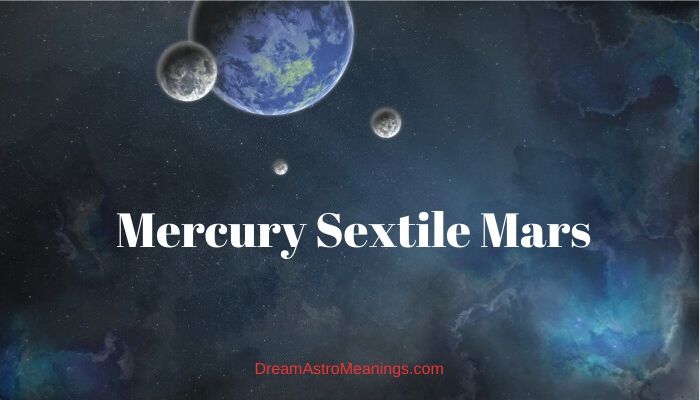 Sextile aspects are always pleasing to lean about, since the sextile is generally a favorable aspect.

Mercury and Mars are two very interesting planets, both energetic, in astrological terms, though of different natures. Each play specific role in an individual’s natal chart and a person’s astrological destiny.

Remember, what a natal chart reads is not a prediction; it is rather an insight into your own being, from an astrological point of view. We are all a part of this universe.

Planets, starts, our own earth, our lives and our existence are seen as connected, in astrology. Planetary movement definitely affects the life on earth.

The effect of the motion of the heavenly bodies still intrigues us in many ways. Since ancient times people have been trying to figure out how this great cosmic dance, to say, affect individual lives.

Those natal chart aspects are the exact angles between planets at the time of a person’s birth.

The specific angle determines the specific energy that flows between the two planets; or, it does not flow well. The sextile is one of the major aspects.

Before we analyze the sextile aspect between planets Mercury and Mars, let us see what the two planets represent in astrology and in a birth chart.

The planet Mercury is an essential element if we are to interpret one’s personality from his or hers natal chart. This planet is one of the five Personal planets.

Mercury is very interesting and important. It represents communication skills, the thinking, the speaking.

Mercury is the Roman counterpart of the Greek god Hermes, the messenger of gods or the messenger god. In astrology, the planet represents messages, as well, communication, relations, speaking, verbal expression in general, thinking, movement, everyday activity, traveling, journey.

This is a planet of practical skills. Mercury is associated with solving problems, with quick thinking and quick solutions.

Mercury represents the direct communication, openness, restlessness, playfulness. There is not much depth within it, because it is more focused on practical communication skills.

However, Mercury is essential when it comes to creating partnerships, colleagueship, working with people. It is related to routine and thus very important in everyday life.

For example, Mercury would affect the way one deals with everyday problems, problems in terms of situations that require quick and efficient solution (e.g., one’s ability to get out of the traffic jam).

Mercury improves communication skills, when in good aspects. When in the bad ones, Mercury’s energy goes the opposite direction. One with blocked or problematic Mercury could be either reckless in talk or too closed.

The planet Mercury is associated with all areas that have to do with communication skills in general.

Mercury ‘rules’ over the public relations domain; it has to do with media, rhetoric, conversation, literature and writing. It also has to do with imagination, for Mercury could perfectly well hide many things within the speech; or it could reveal everything.

Depending on its position, Mercury makes one open or discreet, provocative or measured, trustworthy or a liar. We could easily see that Mercury is a restless planet, not fixed. Its energy is changeable, witty, playful and tricky.

However, people with strong Mercury in their birth chart are clever, agile, quick, verbally gifted, humoristic and precise.

This planet is also called the ‘Planet of the Open Mind’, for it is also the planet of curiosity and youth. It rules the basic education, it is not interested into in depth studies, but Mercury is a well-informed one.

Mercury knows how to deal with much information at once and know how to use it. This planet rules the signs of Gemini and Virgo.

Mars is a planet of different kind of energy, though also very dynamic. Mars is associated with force, physical energy, vitality, effort, courage, daring spirit. Mars is the Roman god of war; Ares, in Greek mythology.

Planet Mars is also one of the personal planets. It tells about one’s desires, passions, ones raw energy, ones concrete actions towards a certain goal. With Mars, things are intense, dynamic and powerful.

This combatant planet has both its good and bad sides. It could be very tricky, if seen in bad aspects, since it is associated with war, battle, conflict, violence, force and injuries.

Mars also represents rivalry and competition, on both a sentimental and a social plan; well, on all plans.

This planet’s position in a birth chart reveals the way in which an individual goes through the life and deals with things, actively.

Mars represents that fierce, raw energy we use when trying to achieve something. This is a planet that has much to do with passion, desire and with a lover’s potential. In men horoscope, it represents the prime energy, libido, potency, reproductive powers. In female horoscopes, it stands for her lovers.

Of course, it tells about Mars qualities that could be seen in the individual as a personality. Mars is aggressive, direct, raging, wrathful, but it could manifest in an extremely productive way, if the aspects were good.

Mars rules the energetic sign of Aries. Mars is about bravery, courage, challenges and risks. It could make you a lot of trouble, but it also strengthens the spirit.

Moreover, Mars usually strengthens the body part that it dominates, according to the position of the planet in a person’s natal chart. The planet Mars is about direct, open approach.

People with strongly and favorably positioned Mars know what they want in life and they are all set on achieving it.

The sextile is one of the major aspects that are to be found in a natal chart. Aspects are angles and relations planets form with one another in a birth chart. Some of these could be very positive, others not as much.

The sextile is one of the favorable aspects, since it generally improves the energy flow between the planets and balances it. The sextile contributes to compatibility, synchronization, development and balance.

This aspect represents the angle of 60 degrees that planets create. It is usually mentioned with the trine aspect. The difference between the two is that the sextile requires more active effort in terms of realization of the opportunities it opens up.

In general, it is an easy aspect and it allows for free and unrestrained expression of personal talents.

This aspect, in fact, represents personal skills and talents within the area of interest. The sextile greatly contributes to creative expression, creativity in a person as a whole.

The sextile knows no unnecessary limitations and its helps a person overcome all the boundaries that might be blocking one’s creativity and general manifestation of individual qualities.

In addition, it contributes to good organization,   balanced dynamic and overall harmonious atmosphere. The sextile is not a forceful aspect, while at the same time it unblocks all the channels.

The sextile always allows for the better part of the aspect to come forward. It represents positive characteristics in a personality, associated with the planets and elements we are considering when looking into a natal chart.

Mercury sextile Mars contributes to all good sides of the combination of these two different, but both very dynamic planets.

Although Mercury is not generally associated with much of in depth study, the passionate, though always direct and straightforward Mars could make them really dive deep into something.

Of course, it has to feed their need for knowledge and fulfill their passions. These people are restless by definition. The place does not hold them long; however, each new place fills them with joy. Their passions may be quick, but they are very real.

These people are commonly very creative; they use their tremendous energy in the most creative way. These people channel it through art, writing, speaking, acting or anything else of the sort. They could be excellent spokespersons or amazing writers.

Mercury sextile Mars individuals are clever, quick witted and they know what to say at exactly the right moment.

They speak the truth and know how to present the truth without offending anybody, even if the truth is not a pleasant one. People love to have them around, since Mercury sextile Mars people often have many new and interesting information and they love to share.

Although Mercury sextile Mars individual’s style of conversation is attractive and engaging, there is not much of empathy within.

They are involved with too many different people and situations, so they do not actually emotionally engage themselves with each one. They are, however, polite, open, friendly and approachable. Theirs attitude towards life is optimistic and refreshing to others.

People with this aspect present with the best and the most productive elements that could be found in both Mercury and Mars.

They are efficient, precise and quick minded. They would not spend ages wondering about whether something would work out or not, because they know it instantly.

Therefore, they are capable of coming up with the perfect solution in the last moment.

Although it could seem chaotic in other’s minds, it is not. Mercury sextile Mars individuals are very well organized and focused on their work. They are masters into investing the least effort needed to achieve the best outcome.

They usually manage to achieve amazing results with less time spent on the work itself. It is not because their approach is reckless and shallow, but because they are naturally gifted.

People with this aspect are capable of turning abstract ideas into practical projects in a very short time.

People with this aspect are generally daring and courageous. They rarely suffer from the lack of self-esteem, but are not the type of a person to go around boasting about this or that.

However, their excellent verbal skills could hardly pass unnoticed. With Mercury sextile Mars, an individual excels in writing, speaking and manual, practical work.

Moreover, all could e perfectly combined, if other aspects were good.