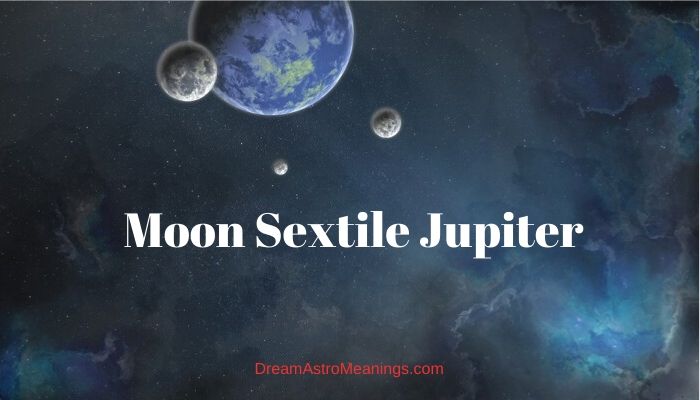 Planetary aspects make for a very important part of an individual’s natal chart and play a major role in understanding how two horoscopes fit one another, when analyzing synastry.

Planetary aspects are angles that planets form in a birth chart. There are major and minor aspects; amongst them, some are labeled as intermediate.

Minor aspects are quincunx, semi-sextile, quintile, septile, semi-square and novile. The sextile aspect, which interests us here is also classified as an intermediate and a minor aspect.

Now, the angles between the planets are not always the perfect ones. However, the closest is the angle to the proposed value, the stronger is the connection and the energy that an aspect creates.

Aspects reveal the way in which the energy flows between two planets. Not all aspects are positive; some are very conflicting and could block the energy.

Positive aspects affect the positive energy of planets in a way that those planets, in a place they find themselves in a birth chart, emit the most positive side they possess.

Each planet possesses complex energies. The position of a plant in a birth chart, along with aspects it creates with other planets gives us a precise insight into meaning of someone’s astrological traits.

Moon sextile Jupiter is the aspect we are going to discuss in the following passages.

First, we would like to introduce you to the meaning and symbolism of these planets in mythology and astrology.

Understanding the planets in their genuine astrological nature will greatly help us understand how those get along one another and what kind of energies they exchange.

The Moon Symbolism and Astrological Importance

The Moon has always been associated with mysteries and magic. It is strongly associated with the element of Water and, in astrology, it rules over the Water element signs.

The Moon primarily rules the sign of Cancer, but its effect is strong in Pisces and Scorpio.

The things get clearer if we remind ourselves that the Moon is the planet of emotionality. All three signs are known as deeply emotional.

The mysterious Moon is a feminine principle, Luna. The Moon is associated with everything that has to do with water and wet places, with seas, oceans, rivers, lakes. It represents the emotional side in a person.

The energy of the Moon is unstable, flexible and changeable. It is difficult to catch; this it is mysterious and often considered magical. The Moon represents the hidden, secret, strange.

The Moon is associated with imagination, dreams, with daydreaming and fantasies. It has much to do with inspiration and creativity. People who have strongly positioned Moon in their horoscope are sensible and sensitive, intuitive, insightful, often turned towards their inner world.

The Moon is best understood if we compare it to the other luminous planet in astrology, the glorious Sun. The mysterious Moon is like its other side.

While the Sun is all that is obvious, straightforward, open and bright, the Moon is everything beneath it. It is like Reason and Emotion; inseparable one from another. The Moon is subtle, though its energy is powerful in its peculiar way.

Although ever changing and flexible, the Moon represents strong relationships, bonds, attraction, and emotional connection. It is associated with patriotism, tradition, home, family, and love.

The Moon is quiet, but its emotional vibration is overwhelming. Understanding the Moon’s position in a natal chart would tell much about the person’s emotional side.

The planet Moon is strongly related to home, family and emotionality. If the Moon is in favorable aspects, one’s emotionality will present in the best way possible; if the channels were blocked, an individual would probably have difficulties in expressing his or hers emotions.

In terms of health, since each planet is associated with specific body parts and organs, the Moon represents the intestines, affects digestive system and reproductive organs in women.

Jupiter was a supreme god of the Roman pantheon, Zeus in Greek. Jupiter rules heavens and earth, other gods and humans. It would be interesting to learn something about Jupiter in mythology, before we move on the astrological interpretation of the planet Jupiter.

According to myth, Jupiter became the ruler god after overthrowing his father, Saturn.

Jupiter’s brothers are Pluto and Neptune. His goddess wife is the mighty Juno. There are many myths involving Jupiter or Zeus. He had relationship with both goddesses and human women; some of his children were Perseus, Heracles, Mercury (Hermes), Apollo and Artemis (Diana).

Those are all very important characters, heroes and gods in ancient mythologies.

In both Greek and roman mythology, this powerful deity is associated with thunder, lightning and generally all similar phenomena. Jupiter is associated with rain, also known as Pluvius or ‘rain-bringer’. Many celebrations were held in honor and to please the mighty god.

For example, the ancient Olympic Games were founded in Zeus’ name and to his honor.  In astrology, the planet Jupiter is of great significance.

It is associated with grandiose principles, such as wealth and fortune, but also higher knowledge and wisdom, high education, religiousness and philosophy. Jupiter represents faraway lands, foreigners, long distance journeys. It is associated with morality and justice, with honor, power and authority.

It also symbolizes one’s self-confidence, optimism, attitude towards the outer world, openness, generosity, honesty and confidence. Jupiter is also considered an astrological protector, similar to the concept of a guardian spirit.

The sextile is one of the major planetary aspects and a positive one. This is a favorable aspect that supports the free and unrestrained energy flow between the planets that for the angle. The sextile is a 60 degrees angle.

The sextile is an easy and pleasing aspect, though it requires some effort invested in order to use its favorable nature.

It is best seen in comparison with the trine, since the two aspects are similar, only the trine is a more dynamic one. In any case, the sextile is a good one. It unblocks energy channels and uses the best of planetary characteristics.

This aspect is especially important when it comes to expression of one’s talents and skills.

It supports the creative principle in an individual. This aspect is associated with tolerance, mutual understanding, compatibility, synchronization. It makes the planets’ relations harmonious.

We could say that the sextile helps two planets recognize one another and get along with, even if they are of very different energies.

With the sextile, energies are intertwined in the most favorable manner. The nature of the sextile presents itself in an individual’s good organizational skills, patience, focus and inner balance, along with the dynamic energy.

The sextile helps you overcome your own limitations, but it is not an aggressive aspect and it would not let you go to the other extreme.

Let us see how Moon sextile Jupiter aspect presents in a natal chart.

People with Moon sextile Jupiter are very stable and balanced personalities. They have all that is needed to be proud of themselves for who they are. They have an inborn sense for justice, but also for tolerance.

They are empathic, but they do not let their emotions get in their way and blind their reason. They are intelligent, realistic, but also optimistic.

Many would describe them as lucky ones, but that mostly comes from their positive attitude towards life. Moon sextile Jupiter are perfectly capable of balancing their emotions with reason.

They have a creative mind, they love to think through things, but they do not over think and they do not lose touch with the reality.

They are independent and capable of taking care about themselves, but are not cold and reserved. They could offer incredible emotional, but also practical support to other people.

These individuals have a very wide perspective of life; they are broad minded, open to hear others’ opinions. They believe in the goodness in people and there is nothing to shake up their convictions on that.

They do not look at life through pink eyeglasses, but they are capable of seeing the good side in everything and they can make use of it, emotionally, at least. Moon sextile Jupiter people seem as everything in life is easy to them.

They simply do not take everything too seriously. They recognize moments in which seriousness is required and they are efficient in solving problems.

At other times, they do not waste energy on worrying and thinking too much about this or that. They tend to look at life from a wider perspective; they are more of a bog plan than detail oriented people. These individuals are usually satisfied with themselves.

They have the charm of an inspirer, not necessarily a leader. They are admired by other people, and sometimes even envied. They seem content and composed in critical situations and they truly are.

The thing is they know it is essential not to overreact. In these people, the reason and the emotional self are balanced, harmonious.

One of the best traits of people with Moon sextile Jupiter in their natal chart is the sense of tolerance. They have a high level of understanding other people and they accept differences.

Moon sextile Jupiter people are sympathetic and they would easily cheer others up. They love to be around people and always act naturally.

This relaxed and easygoing, but self-confident attitude helps them in forming stable and positive relations and connections. These people believe life should be more fun than hard work, but they are not lazy.

They are naturally gifted to find a way to enjoy life to the fullest, yet not to go to the extreme only of having fun. The key is that they are capable to find fun in things that are meant to be serious.

For example, they would find something interesting in the job they were doing, even if it was not their primary interest.

The positive attitude and capability to focus on good sides of all situations, without ignoring the negative sides, is what keeps them going.

Moreover, such an approach helps them deal easy with negativity and actually find a constructive and the simplest solution.