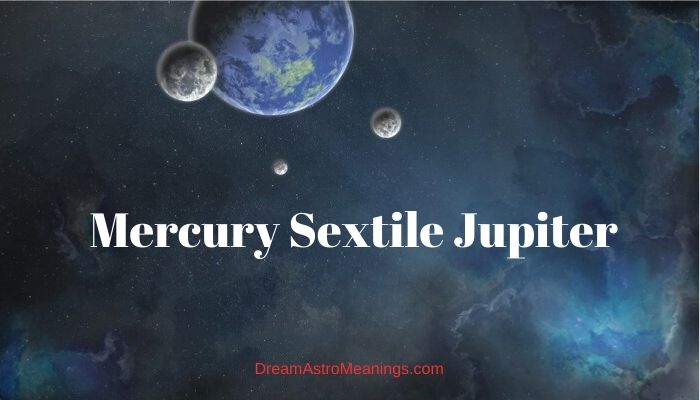 Astrological aspects represent relations that come from specific connections between the astrological planets. Aspects are specific angles planets form with one another.

They are an essential element of every astrological chart and, thus, of major importance in understanding what the chart represent.

Aspects significantly affect the way certain personality traits and characteristics are going to present in an individual.

Aspects could be positive or negative; they could be easy or difficult, in terms of channeling the energy between the planets involved. If planets were in positive, favorable aspects, good sides and positive characteristics of their general nature would show out, unrestrained.

For example, if a person has a favorably positioned planet Moon (yes, the Moon is considered a planet in astrology), he or she would have no problem in dealing with their emotional side.

If the aspects were bad, the individual might have experience difficulties in expressing and channeling emotions.

It applies to all planets and all specific characteristics they represent. When two planets are in good aspects, they present their energies the best way possible, combined and compatible, in a balanced flow.

Today, we are talking about Mercury sextile Jupiter aspect.

Sextile aspects are always interesting to look into and mostly encouraging, since the sextile is one of the favorable major aspects. It is also classified as an intermediate and a minor aspect.

The sextile has a similar vibe as the aspect of the trine, although it is less intense.

Before we move onto the Mercury sextile Jupiter interpretation, let us meet the planets involved.

Mercury, the messenger of god, he is. Roman god Mercury or Hermes, to the Greeks, was one of the much-appreciated deities of the ancient pantheons.

Mercury is usually represented as a young, lovely man, with a winged helmet. Mercury was the god of commerce, trade, communication, travel, luck, trickery and thievery, as well. He also carried the souls of the dead to their afterlife.

In astrology, the planet Mercury is associated with somewhat similar concepts and ideas.

This is the planet of communication, verbal expression, trade and commerce, intellect, quick-mindedness, resourcefulness, thinking, movement, youth and practical management of everyday situation.

Although associated with intellect and intelligence, Mercury is not about deep and higher knowledge.

Mercury is mostly about practical thinking and its good energy helps us get out of any unpleasant situation by finding the most efficient solution, in the shortest time.

Mercury owns information about everything; Mercury is very well informed and knows how to use information, without diving deep into their profound meaning. Mercury is about one’s communication skills.

Jupiter was the head of the Roman pantheon, the same as Zeus was in Greek mythology.

He was also called Pluvius, meaning the ‘one who brings rain’, the Rainmaker.

Jupiter ascended to the throne of gods after overthrowing is father, the devouring titan Saturn, who is Cronus, in Greek mythology. Jupiter’s wife was Juno (Hera), some of his children mercury (Hermes), Apollo and Diana (Artemis).

You probably know about the myth in which Athens, the goddess of wisdom, was born out of Zeus’ head.

There are many myths involving the powerful thunder god. In both Greek and Roman mythology, this deity was associated with weather and related phenomena.

People celebrated the powerful god and organized all kinds of ceremonies in his honor, but also did so in order to please the master of thunders.

The Olympic Games, for example, were organized in his honor. What does Jupiter stand for in astrology?

The astrological planet Jupiter represents high principles, high knowledge and wisdom, religiosity, spirituality, philosophy. It is associated with our attitude towards the world, being one of the social planets.

Jupiter would play great role in one’s natal chart and shape up the individual’s connection with the world, the place within the world.

It is associated with expansion, good luck, wealth and fortune. The planet Jupiter is commonly thought of as our protective planet. Unlike the limiting and restrictive Saturn, Jupiter opens up horizons, widens the perspective and brings in good vibration.

It usually enlarges the body part that is associated with the planet, according to the position in holds in a natal chart. It also represents foreigners, remote places, ling and distant travel.

The sextile is a positive aspect, less intense than trine, but heavier, in terms that, because of its less intensity it requires more effort in order to ‘work’.

The sextile contributes to balance, harmony, dynamics and expression.

We could say it is a ‘creative’ principle, since it supports and encourages the creative expression of an individual. It is associated with compatibility and good relations.

This aspect is helpful in overcoming restrictions and limitations in life. The sextile aspect manifests through compatibility, synchronization, understanding and balance.

This aspect represents all skills and talents one possesses within the specific field of interest. It represents the manner of expression. The sextile stimulates the energy exchange between the planets.

The aspect contributes to expression of the most positive qualities planets involved are characterized by. The sextile always emphasizes the best traits and qualities in a person. We could talk about the sextile as the aspect of body and mind harmony and balance.

The sextile is associated with good organization; it intensifies the dynamics in life, but does not force anything.

The sextile represents the angle of 60 degrees between the planets. This favorable aspect gives one better chances of recognizing good opportunities in life. In addition to overcoming limitations, the sextile helps us deal with negativity and defocusing our mind from negative, pessimistic thinking.

Let us now find out how the sextile affects Mercury and Jupiter.

Mercury sextile Jupiter is an incredibly favorable aspect that is clearly visible in the personality.

People who are born with this one tend to dream big and are visionary. Their heart and their ideas are pure and noble.

People with such favorably positioned Mercury and Jupiter tend to see everything on a big plan. They are not particularly detail oriented, in terms of focusing on one single aspect of a situation and neglecting the others.

They see everything as a part of one big picture. People with Mercury sextile Jupiter are efficient, practical, easygoing and capable of solving problems with ease and accuracy. Their minds are quick, their conclusions practical and precise.

People with this aspect enjoy learning and gathering information. They are curious about people, about different cultures and ideas.

At the very young age, these individuals express their willingness to learn, but also to share their experiences and information gathered with others. These people are usually extremely gifted with words, especially in terms of speech.

They are masters of information and they know how to use information. They are resourceful, but they seem also to possess some kind of natural luck, which probably originates from their positive view on life.

These people are very tolerant, approachable, friendly and open to others’ opinions. They are usually very extroverted in nature and enjoy both listening others and speaking to them.

They are a type of people who could talk with everyone. They do not limit the circle of people around. They love to travel; they have a natural gift for languages.

People with this aspect are generally optimistic. They are capable of finding the solution to every situation, without losing their minds and making drama over difficult and complex problems.

As we have mentioned, they see it in a bigger picture; they avoid focusing only on the negative side. They do not focus solely on the good one, but they see everything as a part of one big plan that is, in its core, good.

Mercury sextile Jupiter individuals are especially interested into travelling. They are kind of citizens of the world, even if their current life circumstances do not allow them physically to travel much. They like to talk to people from all parts of the globe.

Mercury sextile Jupiter like to gather information about everything. They have many interests, but all their interests are also a part of some kind of their big inner plan.

They are gladly involved with international projects; they would study abroad, work abroad or simply travel around the world, if possible. Moreover, they like to share their experiences with others.

As we have said, Mercury is not about deep knowledge, but Jupiter is about the social aspect of knowledge.

Therefore, information Mercury sextile Jupiter gather might not be an in depth study about this or that, but it could be a very practical and a helpful set of information.

For example, a Mercury sextile Jupiter would give you some basic information about a historical site. However, they could tell you exactly what is needed to know so you get the picture of it.

Moreover, they would tell you how to reach that site in the most practical, the fastest and the most economical way. Mercury sextile Jupiter people are easy to talk to and they find it easy to approach others.

They are very tolerant and generous. Mercury sextile Jupiter respect others. If they do not understand something very well, they would ask. They are straightforward in communication, but they are not imposing or aggressive.

Their laughter is refreshing, their humor healthy. These individuals love people and are fascinated by the diversity seen in the world.

One of the best traits of these individuals is inarguably their positive approach to life and their willingness to learn about the people and the world.

They are not particularly sympathetic, since they get in touch with incredible number of different people and find themselves in all kinds of situations; it is a natural self-defense mechanism.

Their approach to life is easy, but not shallow. They could never be described as indifferent and cold people.

Their optimism makes them always see the goodness in others, but they are not delusional. They would help anyone in need, offering a practical, rather than an emotional support. They do not ask anything in return.

Mercury sextile Jupiter people are good friends, but their restless nature could make them a bit unreliable, simply because of the fact that they are always on the run.