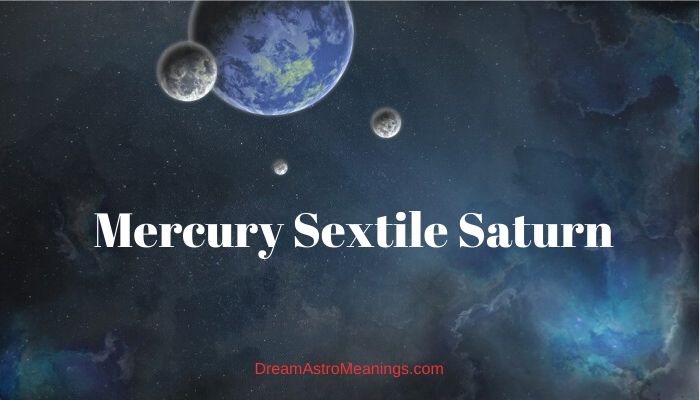 The natal chart is a chart of planetary positions in the time of birth.

Astrology and the aspects between planets in the natal chart can determine the person’s traits and give an idea in which directions their life could unfold.

The aspects are relationships the planets make during their movement on the sky when the planets form certain angles between them. They can be major and minor aspects.

All aspects can be important for the person’s character and destiny if they are exact or they have tight orbs. Such aspects can help determine the major traits and life events.

Sextiles are harmonious aspects. They are similar to Trines and can sometimes be referred to as the “lesser Trine”. The influence of the Sextile aspect enables the planets to demonstrate their true energy and full potential.

It allows the planets to cooperate and help one another, which enables the person to receive the best of the two planets.

The areas ruled by the planets which form the Sextile aspect are the ones where this aspect will fully show its potential.

Under the influence of this aspect, the energy of the planets flows easily, which is opposite to the bad aspects which block the flow of energy and influence of planets. Good aspects such as sextile clear the path for the person to benefit from the best traits of the planets involved, while bad aspect create obstacles to achieving goals.

Sextile is formed when two planets are at a distance of 60 degrees. The orb is up to 5° which means that the aspect is effective when the planets are within the span of 10°, or between 55° to 65° distance between them.

Sings in complementary elements, like air and fire and water and earth, naturally form Sextiles between them.

Sextiles create the person’s talents and special skills in various areas, related to the sign and house where the planets that form this aspect are placed.

Sextile is a good aspect but it can make the person inactive and lazy because they have many choices and opportunities to choose from. Sextiles and good aspects in general, make the person’s life easier, but at the same time affect their will and ambition.

Because they easily achieve their goals, these people can start missing wonderful opportunities knowing that new ones are coming, which makes them waste time and waste their potential.

Sextile aspects in transits and progressions usually bring fortunate opportunities in the person’s life, or encounters with people that can help in their progress or development of their talents.

Mercury is a small planet; and in fact, it is the smallest in our Solar system, after Pluto lost its planetary status. This planet is the closest to the Sun and moves very fast, with only the Moon having a fastest movement. It takes close to 3 months (88 days) to circle around the Sun.

Mercury rules Gemini and Virgo and is strongest when it is placed in these signs.

Unlike Mercury, Saturn is a big planet, and it comes after Jupiter, which is the largest in the Solar system. Saturn has a ring system which consists of dust, ice particles, and rocky debris.

Saturn is also known for the 82 moons which orbit it and Titan among them as the largest moon. This moon is larger than the planet Mercury. The composition of Saturn is mostly hydrogen and helium. Also, Saturn lacks solid surface.

The path of Saturn around the Sun lasts around 29.5 years and it spends around 2.5 years in each sign. Saturn got the name after the Roman god of agriculture, seeds, crops, and harvest, wealth, social order, and conformity. Saturn was an important deity for the Romans.

Saturn rules responsibility and sense of duty. It rules the desire to achieve success.

When transiting Saturn returns back to its natal position, which is when the person is around 29.5 years old, that is a period of retrospection and evaluation of things achieved so far in life. The person examines whether they are satisfied with where they are in life at that moment.

Transits and progressions of Saturn usually indicate events which will teach the person valuable life lessons, and mark the period of heightened responsibility, obstacles, or hard work to achieve goals.

Mercury in Sextile with Saturn in the natal chart makes the person focused and able to see the larger picture of things.

These people usually possess excellent power of concentration, they are very organized and have great organizational skills, and they have a good memory as well.

These people tend to achieve their goals in the best possible way. They usually inform themselves thoroughly about a problem they have so they could find the best solution not relying on others if they don’t have to.

They can be prone to controlling matters and not having confidence in other people’s abilities, and they are usually right about that because they are very skilled and usually do things better than most people.

They love to be very informed about the things that interest them and often become very knowledgeable in these areas. They have a variety of interests which gives them a great amount of information they can use for conversations on various subjects with different people.

These people are thorough and precise and don’t let anything to chance. They like to plan things ahead and diminish the possibility of making mistakes.

They also have a skill to express their thoughts in a concise manner and easy for people to understand what they mean.

People with this aspect usually have mental strength which enables them to go through difficulties calm and collected.

These people often know a lot about tradition and have great respect for traditional values as well as their ancestors. They can be perceived as serious and they are at times, when the circumstances require. They are interesting to listen to because they have different stories people love to hear about.

They have a practical approach to doing things, and avoid wasting unnecessary time and resources. They are excellent for higher studies because they have the necessary concentration and determination to successfully finish them.

They are good in areas like sciences, technology, and all areas where there needs to be focus on details. They usually manage to become successful in their career and business and get adequately financially rewarded for their efforts.

They usually have a great amount of knowledge and in some cases they can be walking libraries. People often turn to them for information about various areas and they are more than happy to share their knowledge with them.

They often use their knowledge for solving their problems, but also the problems of people from their surroundings. These people truly enjoy learning new things and are often exploring some new areas of interest.

This person often gets opportunities to expand their knowledge. They can be excellent as teachers because they have a natural understanding for the needs of young people as well as the maturity, patience, and stability required to transfer their knowledge to them.

People with Mercury Sextile Saturn have the ability to discipline their mind and focus until they get the job done. They are precise and very organized, especially when it comes to their work. They don’t allow any detail missed.

Transiting Sextile between Mercury in Saturn often brings an opportunity to start working on a long-term project which requires a lot of effort and concentration.

It will also require time, discipline and patience, as well as a detailed approach, but this aspect ensures the success of such project.

Don’t get discouraged if some obstacles arise and be patient and determined to overcome them. This aspect is a sign of success coming after organized effort.

During this transit you might feel that your mind has cleared and you can easily perform various intellectual tasks, even simultaneously; this might be the time for hard work, studies, and anything that will require your focused effort and patience.

If there’s something you haven’t finished yet, like some studies, paperwork, or similar activities, this could be a good time to finish it. You are blessed with clear thinking, good concentration and memory.

This could also be a time when you might meet some interesting and very educated people that will help you in achieving some of your goals, or that you will learn something new about the matters that interest you.

It might also mark a period filled with serious professional discussions.

Maybe you will be in a position to transfer some gained knowledge to other people in some kind of lecture or a similar situation.

In some cases, this transit might indicate the beginning of a serious work on some project that will include intellectual work and writing. You might begin writing a book, or something of similar nature.

This is also a good time to begin studies or to somehow upgrade your knowledge and education.

In many cases, this transit indicates a period of encounters with older people that you might learn a lot from. This could also indicate contacts with people in authority positions.

For some, this transit might indicate finally finding the solution to a long-term problem and being able to relax.