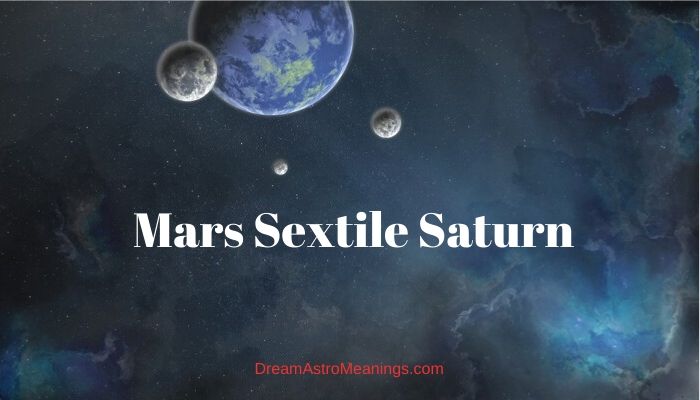 Planets and astrology can help us discover a lot about a person’s character and their possible destiny. It can help us determine the person’s interests and the areas where they can achieve success or encounter obstacles.

Especially aspects are important to determine the person’s character traits.

Aspects are connections between planets which have special meanings and are formed when the planets find themselves at a certain distance from each other. Planets are in constant movement and interact with one another.

There are also minor aspects like the Semi-Sextile (30°), Quincunx (150°), etc. For various aspects, there is a different tolerance in degrees, which can go from 1° to 10°.

The natal chart is a chart of the planetary positions frozen in the moment when the person was born. The aspects between the planets in the person’s natal chart form their character and determine their future.

The Sextile is formed when the planets form a 60° angle. It is considered a major aspect and belongs to the so-called beneficial ones. It has a harmonious and balancing nature and helps the planets express their true energy without blockages.

The planets help each other to demonstrate their true nature. Unlike good aspects, bad aspects create blocks and prevent the planets from expressing their best traits.

The orb for this aspect is up to 5° (55° to 65°). Sextiles are formed naturally between complementary elements, like water and earth and air and fire. This aspect shows the area of our life where we might expect to experience good luck and fortunate opportunities.

These people usually get a lot of chances to succeed but that often has a contra-productive effect, making these people lazy and unambitious. They tend to miss the wonderful opportunities this aspect brings, knowing that another chance is coming.

This in turn leads to a waste of time and sometimes years passing without these people deciding to take some action towards achieving their goals. They often end up not using their full potential.

The Sextile gives the person talents and skills in various areas and allows them develop their talents and creativity. It gives opportunities to expand their knowledge and learn new things.

This aspect brings new things into life, especially in transits and progressions, where it brings chances for the person to grow and expand.

Sometimes it brings encounters with people that could help the person’s development.

Mars is sometimes called the “red planet” and that is because the surface it is covered with, red iron dioxide. This planet is not big, and is the second smallest after Mercury.

Mars is similar to earth which is why some people believe that there was life on Mars at some point in time, and that in the future, life will also be possible for humans on this planet.

Mars got the name from the Roman god of war. It rules the signs Aries and Scorpio where this planet has the most powerful energy. It tales Mars two months to travel through a sign.

Unlike Mars, Saturn is a large planet, and is the second in size after the planet Jupiter. Saturn has a system of rings which are composed of ice, dust, and rocky debris. This planet has at least 82 moons, and the largest one is Titan.

Titan is larger than Mercury. Saturn’s surface isn’t solid and is composed mostly of helium and hydrogen.

Saturn orbitsoi the Sun in a time span of 29.5 years and spends around 2.5 years in each sign.

The name comes from Saturn, Roman god of agriculture, seeds, crops, harvest, conformity, social order, and wealth. He was an important deity in the Roman god’s pantheon.

In astrology, Saturn is the ruler of Capricorn and co-ruler of Aquarius. This planet is exalted in Libra.

It is the ruler of responsibility and its influence makes the person organized and responsible as well as enduring and determined.

The time when transiting Saturn returns to its natal position, which is when the person is around 29.5 years old, indicates the period when the person is evaluating their achievements and satisfactions with their success in life so far.

Mars Sextile Saturn is an excellent aspect to calm down the energies of these powerful planets.

While Mars is the ruler of drive and energy which inspires action and movement, and also gives you the energy for the movement, Saturn is the planet ruler of hard work, discipline, endurance, practicality and focus.

The combination of these planets show the areas where the person is likely to take action and where their responsibilities lie or they might feel restricted in some way.

This aspect depicts a person as someone who is aware of where they stand and what they desire in life. They also know how to get there.

They have the energy and drive, but they also have the precision and planning abilities which prevent them from doing irrational moves and jeopardizing themselves.

This person won’t give up until they achieve what they planned to do. They are not afraid to work hard to achieve their desires. These people are adaptable and enduring and they don’t require special conditions to feel good.

A person with this aspect is willing to work hard, and has the necessary stamina, perseverance and endurance. When they make up their mind about something it is difficult for them to back down. They are not quitters and they consider it a sign of weakness.

These people also have a strong self-discipline and they are not prone to procrastinating. Their duties and responsibilities come first and they do what they can to finish them in time.

People with Mars Sextile Saturn are realistic and practical. They usually have realistic goals and they take their time to accomplish them. These people are organized and plan things ahead. They usually concentrate on one task until they finish it and don’t do several things at once.

These people are individualists and they don’t like to be told what to do and how to do it. They have a strong will and powerful character which is difficult to influence.

They have a strong ambition and will to succeed and are usually very successful. They are also very reliable and people often turn to them for help. They usually have long term goals and envision themselves successful in the future which is often what they manage to accomplish.

These people are good for leadership positions but they are also good as workers. Their superiors are satisfied with them and that often gives space for promotion and career advancement.

They are inspired by difficulties and challenges and they only make their will to succeed stronger. They have good chance of succeeding in areas such as mechanics, construction, business, sports, or the military.

People with Mars Sextile Saturn are loyal to their friends and loved ones and they are very dependable. They can sometimes be overly cautious which causes them to lose important chances.

They need to learn how to relax and take more risks, trusting that they will be able to handle the unexpected. They also need to learn to be more spontaneous and not be so calculated because they risk others considering them boring.

They are the number one person to turn to for security and protection. They are serious and people naturally see them as leaders and protectors, especially younger people.

They have a strong personality and they are trustworthy and honest. They always speak the truth and they don’t like people who try to lie to them.

Things they create tend to be long-lasting and have value. They aren’t interested in short term projects and they challenges seem inspiring to them. They enjoy testing their strength and despise weakness in any kind.

They are very disciplined and organized and they have a talent to organize and discipline others as well. That makes them excellent for a military service.

People with aspects between Mars and Saturn have a strong psychical condition and stamina. They are enduring and can withstand a lot of hardships without complaining.

Transiting sextile aspects between Mars and Saturn usually introduce opportunities for putting in efforts to achieve goals ensuring their success.

This is a time when the person is usually very productive and has a lot of energy and endurance to finish what they have started.

This might be the time when the person plans their actions to achieve their goals and going through all the details to ensure that no mistakes are made.

This aspect in transit could indicate some hard work on projects the person has been preparing themselves for a long time. It might also indicate a lot of manual work, like mechanics or construction.

If there is something precise that should be done, the person will have a lot of patience and willingness to do it perfectly.

During this transit, the person might be prone to caution and avoiding risks which will also prevent possible damage or getting themselves in some kind of danger. This is a good sign for long-term projects and progress concerning such projects.

The person might need to wait until they see the result because this aspect might involve some delays as well, but the success is steady and certain.

This aspect in transit might mark a time when the person will come across reliable and responsible people that will help them achieve their goals and plans.

This aspect is a sign of gradual progress which requires focus and concentration. The results won’t be immediate but the satisfaction is guaranteed.