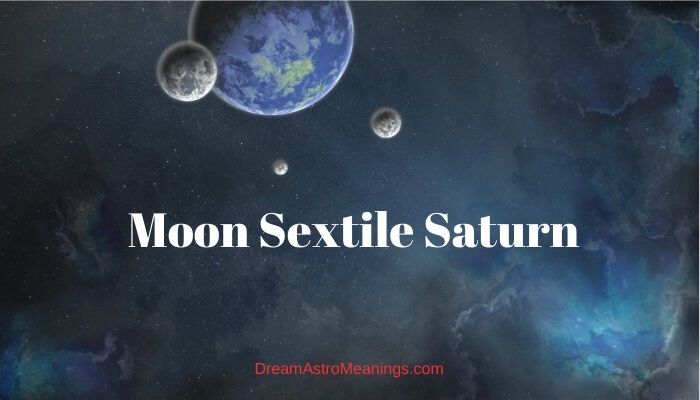 Since ancient times people have observed the stars and planetary movements trying to discover their meaning for the life of the ordinary human, as well as their influence on the events that happen in their surroundings and broader.

Astrology is an ancient practice of deciphering the relationships between planets and their meanings and influence on people and circumstances.

Aspects between planets have a very important place in forming the person’s character traits as well as their life events and destiny.

Of course, these are all a combination of other factors, such as planetary placement in signs and houses, but aspects are especially important when they are exact.

What are aspects between planets? They are relationships between planets when they form a certain angle of distance. They can be favorable and unfavorable, which means that they allow the energy and nature of the planet to express freely, or they block it.

The Sextile is a major aspect and has a harmonious nature. It is formed between planets that form an angle of 60°. The deviation tolerated for this aspect is 5° (55° to 65°).

This aspect allows the planets which form it to express their nature fully and enables the free flow of their energy, enabling the cooperation between them. This aspect has a beneficial nature and is similar to the Trine which is why it is sometimes called the “lesser Trine”.

Naturally, Sextiles are formed between signs with complementary element, like fire and air, as well as water and earth.

Sextile enables the person to use the full potential of the planets which form this aspect. Sextiles form the person’s skills and talents usually in the areas ruled by the sign and house where the planets are placed.

Sextiles bring wonderful opportunities for development and growth, but are also responsible for making people lazy and inactive. They ruin the person’s ambition and drive to go after their desires because they make things very easy for them.

People with a lot of Sextiles seem to have opportunities knocking at their doors uninvited and they begin missing them knowing that new ones are coming. This makes them lazy and creates a tendency to procrastinate and postpone things.

It is safe to say that people with challenging/ bad aspects often achieve more success in life because they know that things won’t fall into their laps and they need to fight and put in the effort for their achievements, and they usually realize that since young age.

People with too many beneficial aspects often remain at an average level, failing to use the potential that has been given to them by birth. Of course, this is not always the case, but in many cases, sadly it is.

Transiting Sextiles or Sextiles formed in progressions usually bring new chances and opportunities for growth and development, especially of your skills and talents.

Often these transits and progressions bring people in the life of a person that could help them achieve some of their goals or help them develop and use their skills.

It is the second brightest astronomical body after the Sun. It is generally believed that the Moon formed not long time after the formation of the planet Earth. Some estimates believe that it is 4.5 billion years old.

The Moon circles the Earth in a motion that only the same side of it can be seen from the Earth, and its far side can never be seen.

The first human expedition on Moon was from the USA in 1969 and the last one in 1972. After that, there were not publicized human missions on the Moon.

The Moon rules the sign of Cancer. It symbolizes the person’s emotions and instinctive reactions. It symbolizes our personal needs and the main habits we have.

This is also the planet ruler of our subconscious content. It shows how the person handles their daily problems and issues.

In astrology, the Moon is a symbol of our mother, women in general, as well as our motherly instincts. It represents female energy and indicates our identification with our femininity.

It also indicates how spontaneous we are. The Moon symbolizes nurture and care and reveals this side of our personality.

It indicates how well we are able to take care of ourselves and our needs as well as for the needs of our loved ones. This planet symbolizes creativity and personal expression. It reveals the level of comfort we enjoy in our lives.

The Moon symbolizes intuition and psychic abilities. It rules our mood and people under its influence are prone to moodiness without a reason. The Moon also reveals our prejudices and beliefs. It is the ruler of our memories and past hurts.

Moon in bad aspects and badly placed in a natal chart is often responsible for the person’s holding on to the past which prevents them from moving forward.

The Moon influences strongly people who have a prominent Moon in their natal chart, that is, those with Moon on an angle of the chart, Moon as their ruling planet, etc.

These people are usually very adaptable and emotional. They are protective and nurturing, usually prone to irrational behavior and mood swings.

The placement of the Moon in a natal chart house reveals the areas where the person feels most relaxed and comfortable.

Saturn is a giant planet, the second largest in the Solar System, and Jupiter is the largest.

This planet consists of a ring system made of rocky debris, ice particles and dust. At least 82 moons orbit this planet and the largest one is Titan, which is larger than the smallest planet, Mercury.

The composition of Saturn is mostly helium and hydrogen, and it doesn’t have a solid surface. Saturn needs 29.5 years to circle the Sun, and it spends around 2.5 years in each sign.

The name Saturn comes from the name of the Roman god of agriculture, which also rules wealth, social order, and conformity. Saturn was a very important god in the ancient Roman pantheon.

This planet rules the sign of Capricorn and co-rules Aquarius. Its exaltation is in Libra.

This planet also rules responsibility towards duties and performing them on time. It is the symbol of endurance and stamina, as well as determination to accomplish goals.

This planet return to its natal position after 29.5 years indicates a period of retrospection and evaluation of the achievements we have made so far.

Significant transits and progressions involving Saturn indicate periods of learning major life lessons usually through a series of events over which the person doesn’t have any control.

Moon Sextile Saturn is an aspect that gives the person stable and mature emotions. The person might appear restrained and even cold, but on the inside they have a deeply emotional and sensitive nature.

Saturn gives this person a great dose of responsibility and clear reasoning. They usually don’t allow their emotions to overwhelm them. They remain calm even during crisis and disturbing situations which is why people often turn to them for comfort and support.

These people usually have no problem controlling their emotions. They are serious and well-mannered. They might be considered boring or reserved by people who don’t know the, well.

They have a small circle of friends they keep close to them and share their secrets with. These people are usually not very sociable, although there are exceptions.

One of their main characteristics is self-discipline and dependability. They don’t easily show their emotions. Only the ones who are allowed to approach them can understand how emotional they really are.

They have a practical approach to things. They are very organized and don’t miss details. These people don’t like making mistakes which is why they prefer planning things.

The people they care about will feel protected and secure when they are around them. They are very responsible and loyal. They perform their duties on time and they despise people who lack responsibility and organization.

These people might be prone to missing some opportunities because they sometimes appear shy or reserved. They don’t like to impose themselves which is often the reason why people with more intrusive nature steal their chances.

They need to learn to relax and become more open in their interactions with people, especially strangers. They often appear as they have a wall that prevents people from getting closer to them.

People with Moon Sextile Saturn are very attached to their families and people they care about. They are worried about their wellbeing and they do everything to protect them and make them feel safe.

They also need family stability and protection, and they usually have a strong attachment to their mother. In many cases, their mother displayed the same reserved emotional behavior but was in fact very emotional.

People need to prove their value and commitment to them before they let them into their life and consider them their friends.

Transiting aspects between the Moon and Saturn usually bring matters related to emotions, family, responsibility, and other matters with similar nature to the surface.

During this transit you will probably avoid to show your emotions, especially in public and in front of people you don’t know well. It might also be a time when you will decide to share your feelings with loved ones and people you care about very much.

This might also indicate the beginning of a serious romantic involvement and reaching another level of commitment in your relationships.

This transit is the time where you might be called to prove your loyalty and devotion to someone.

Maybe a heightened level of responsibility will be expected of you and you will need to be show yourself in the best light.