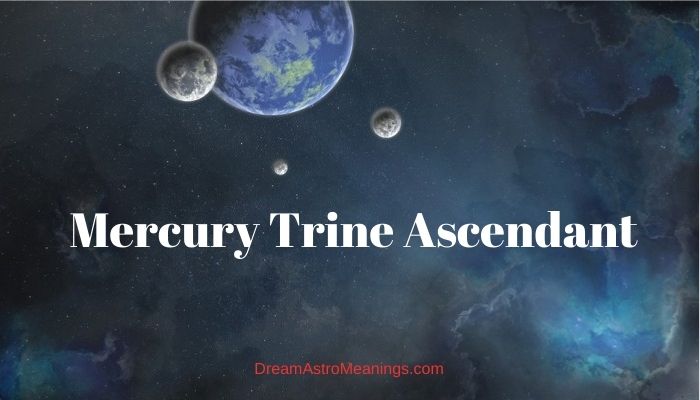 The planet Mercury in astrology rules the signs Gemini and Virgo, as well as the third house. Relations with people are associated with Mercury, the sign and the house, where it is located in the natal chart, will show the features.

It is the smallest planet in the solar system and the closest to the sun. The astrological function of Mercury is mind, cognition and consciousness. He is responsible for the ability to understand, the desire to know the world around him, acquire knowledge and skills, communicate his thoughts.

Mercury is associated with all this in astrology, the winged messenger of the gods in Roman mythology. He also personifies the ability to establish relationships and comprehend the relationship between things, between a person and the rest of the world.

From the point of view of astrology, this planet represents the desire inherent in all people for understanding and communication in some form.

It defines how you think and systematize previous experience, how the mind works, what it does and what it focuses on, what we strive for, how information is perceived and how it is assimilated.

Mercury is also associated with agility and speed of movement. He has a strong influence on a person at a time when a child learns to speak, walk, read, write and learn about the world around him.

Consequently, it is associated with childhood and curiosity, but if its influence weakens, then it may manifest itself as an inability to develop intellectually.

People who have a brightly manifested Mercurian energy are quick-witted, smart, quick, and witty and have an inquisitive mind. No matter how it is located in the natal chart, it always means curiosity and ingenuity, flexibility and a willingness to try something new. Its purpose is not to let the “divine child” die – that part of us that is always young and open to the world.

The location of the planet in the natal chart shows the mindset, how you express your opinion, it is difficult or easy for you to learn, how much you want to communicate with other people, and how you do it. His position also explains how you tend to explain your actions, what inspires you, what kind of work you are suitable for.

However, his qualities can also be manifested in impatience, nervousness, exhausting himself with too much mental stress, excessive intelligence, inability to express himself clearly. To enhance the positive influence of this planet, the talisman of Mercury will help.

In astrology, Mercury is responsible for the creation of symbols, languages, the transfer of experience through speech and thinking. It is associated with youth, as it manifests itself most strongly during the period when consciousness is being formed.

Among the Romans, he was the winged messenger of the gods; in Greek mythology, Hermes corresponds to him. He was allowed to wander between the underworld and Olympus, helping the exchange of ideas. He served as a mediator and conciliator, and the presence of Mercury in the astrological chart means communication, travel, exchange of thoughts and information.

He crossed rapids and borders – earthly and dividing gods and people. Often its influence can be felt when changes begin, it is time to start a new segment of life. In addition, Mercury was a guide of souls, could slip into the underworld and return unnoticed.

From the point of view of astrology, Mercury is associated with that part of the soul that can move from one level to another, from the depths of the subconscious, where disparate positive and negative entities are hidden, to consciousness and the heights of thought.

Descent into the depths of the subconscious, in order to find the material displaced there and examine it in the light of consciousness, is in its sphere of competence.

It gives you the opportunity to get to know yourself better and become whole. The mind can travel anywhere, the boundaries are set by itself. It controls the ability to study ourselves and analyze our actions.

In the human body, Mercury controls the nervous system, which receives signals from the outside world and from the body.

The healing power of the mind and its ability to bind together disparate facts is symbolized by the winged rod of the messenger of the gods and two snakes that are intertwined on the handle. This symbol was also borrowed by medicine.

Adds charisma with an additional connection with Chiron, which usually by itself does not give such wit and optimism as in combination with the trigon Mercury – Ascendant.

However, when the 12th house is full, there is a possibility of turning into an intriguing mocker and becoming a threat to a decent society or an outcast.

Mercury in astrology is responsible for thought processes: how do you get knowledge about the outside world, how you organize information, interpret it and communicate it to others. You build your life in accordance with your beliefs, and they, in turn, determine your perception of reality.

The mind plays a major role in how you see the world. In addition, it is through the mind that one can free oneself from restraining thoughts that prevent one from looking at life in a new way.

The most suitable job is to work in a large company with the possibility of growth and advanced training.

Prestige inspires labor exploits, so the owners of the Mercury – Ascendant trine will prefer to start with a small position in a renowned corporation, ignoring the high salary in an unknown company.

Intellectual unity and a sense of humor are more important for them than spiritual qualities and sexual attraction, therefore in their youth they are faced with the betrayal of the so-called friends and do not feel passion for the opposite gender, respectively, intimate relationships can bring disappointment. An overly developed mind with a weak Venus does not allow the heart chakra to bloom.

To maintain harmony, astrologers recommend wearing natural green stones, enhancing both Mercurian vibrations and so is the energy of love. Emeralds, malachite, favorite, jasper, peridot, jade and green tourmaline are suitable for the native.

Trigon (trine) is an auspicious aspect and brings good luck throughout life, if you develop the talents that it affects.

When Mercury is involved, which is responsible for eloquence, sociability, flexibility of thinking and enterprise, together with the symbol of social success of the Ascendant, it is obvious that the control of mental energy is the fate of the native.

But the very aspect of the creative nature, which means that it is not a techie, but an eternally playing child, for whom even politics and diplomacy is a fun and exciting process and an occasion to show erudition, sharpness of mind and rhetorical ability.

The sense of humor here is excellent, and thanks to it, carriers of the trine Mercury – Ascendant can win the most hopeless games in business and jurisprudence, and also take first place in the elite of show business.

Mercury is associated with all this in astrology, the winged messenger of the gods in Roman mythology. He also personifies the ability to establish relationships and comprehend the relationship between things, between a person and the rest of the world.

Possibilities of the trigon Mercury – Ascendant the speed of action and the charm of youth is the first impression of men and women with this aspect. They instantly find their bearings in an unfamiliar team, on stage, they know how to get out of an awkward situation with brilliance and applause.

Adds charisma with an additional connection with Chiron, which usually by itself does not give such wit and optimism as in combination with the trigon Mercury – Ascendant.

However, when the 12th house is full, there is a possibility of turning into an intriguing mocker and becoming a threat to a decent society or an outcast.

But if the planet of the mind is in the 3rd or 5th house, the native is the soul of the company. A pronounced need for communication on topics of literature, music, cinema prompts to look for an intellectually developed environment, and, accordingly, automatically elevates to the right social strata, meeting the needs of the Ascendant in self-expression.

This path is faster for the owners of an ascending sign in the elements of air and fire, but there are more mistakes there. If it is located in the spheres of influence of water and earth, then the native thinks more and calculates the consequences of communication and acquaintances.

Risk is perceived as an element of a fun game, a person gladly accepts the challenge of competitors and does not get upset in case of loss; money comes easily, and spending is associated with receiving guests, jewelry, and travel.

Holders of the trine Mercury – Ascendant are advised to calm an incredibly mobile mind, keeping their hands busy with applied creativity. These are wood carving, knitting, embroidery, modeling, mosaic and painting. Business trips and trips to major cities will have a beneficial effect on social advancement.

Men and women with this aspect are charming and gladly flirt with pretty members of the opposite sex. It is fun and interesting with them, the ease of communication captivates, and erudition commands respect.

However, the ability to quickly make friends and useful connections, a host of fans in reality and on the Internet does not mean that the native opens his soul wide open.

Trigon Mercury – Ascendant creates a social mask of a jovial joker, behind which the true face of a spiritually developed intellectual with a need for a strong feeling and an equal partner in mind is hidden, with whom you can not only joke and attend social events, but also develop.

The dream of men and women with such a trigon is a joint family venture. The carriers of Venus and Mars in the signs of air and fire are suitable for them. At the same time, one must be prepared that the native can easily offend with a word and not even notice it.

Men and women with this type of trigon are created for intellectual activity and peacemaking. Physical labor annoys them, as well as the daily routine without the opportunity to expand knowledge and receive new diplomas.

Do not lose sight of other nuances of the influence of the trigone: the need to read, study in different directions, and develop both scientific knowledge and acting skills, especially if Mercury is in the 9th and 5th houses; emotional sensitivity, vivid imagination, combined with the ability to concentrate on business and attention to detail.

The ability to convince others that you are right, attract supporters, sponsors, bargain and get favorable conditions for cooperation; the ability to convey even complex information simply and accessible to others; love for intellectual collective quests, adventure and travel, where useful connections are made at the same time.