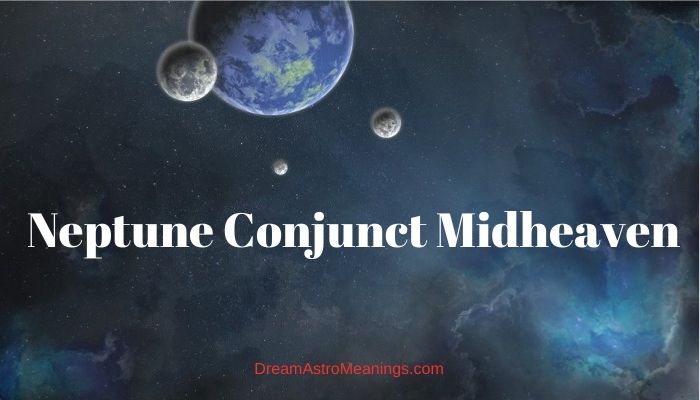 Opposition with the Midheaven Meridian suggests a lack or excess of the qualities of the planet at the other end of the aspect, which replace each other at the most inopportune moment, unexpectedly for the native himself.

Neptune is a mystery, the lord of the subconscious and dark karmic waters, a master of mind fogging.

The middle of the sky on the cusp of the 10th house will tell the owner of the horoscope in what area he will have a successful and productive fulfillment of his destiny.

This is not only a choice of a profession at the call of the soul, but also a hint on how to establish relationships in a team, with a boss (after all, you can prepare in advance for the psych type of a leader), and even with your spouse’s parents.

The path to happiness will be easy if you know the rules of travel. The answer is not only in the zodiac sign of the 10th house, but also in the planets nearby MC.

The connection with the planet is the strongest aspect, including the energies of only the 10th house, with an emphasis on the qualities of the second member of the union.

Neptune is the highest planet that attracts large-scale world-class events for the formation of a person.

The native is influenced by fashionable spiritual trends in religion, psychology and art.

The only problem is to figure out what resonates more deeply in your soul and choose one direction for your career, and not many, which leads to the dispersion of talents.

The owners of the aspect idealize the world around them and their role in improving it. They dream of saving the Universe from evil and believe that the very first creative opus or appearance on the stage will cause a storm of applause and a storm of delight.

Therefore, facing reality can be painful. They take criticism with hostility or take offense at everyone, stopping creative experiments, which is fraught with immersion in routine and departure from purpose. Much depends on the shapes of the aspects.

If Neptune is part of the Great Square, and even more so of the Cross, Trapezium or God’s Finger, it is more difficult to break through obstacles.

Strengthening Saturn and Mars, and through them perseverance, willpower and faith in oneself, will help.

The second catch is the idealization of the boss, the Stockholm syndrome in relations with him, when his sins and mistakes are covered, and as a result, the native has to answer.

To be successful, you need to listen to your intuition, as well as the advice of your mother or a spiritually close relative.

Mystical signs and astrologer’s consultations in this situation will help you choose the right path.

Other important features of the conjunction of Neptune with the Meridian of the Midheaven: a strong psychological influence of parents on the formation of character and decision-making (if the mother and father are abusive or alcoholics, it is very difficult to cope with the destructive influence).

Such subjects do not appear to be reliable employees, since daydreaming and mystical inclinations are incompatible with routine work and self-discipline.

Such people are good at professions that require creative imagination and intuition.

They often find themselves in the fields of art or psychology. They are lonely in their environment, their motives are clear to a few.

With a high development of character, they are called to help other people come to a higher vocation and spirituality.

With the defeat of Neptune, there is a danger of being involved in scandalous stories and alcohol abuse.

Such people should not be allowed to be involved in secret intrigues, since in the 10th House personal secrets cease to be such. Such a person creates deepest illusions around him.

Everyone sees in him an irresistible and powerful figure. He often achieves significant professional success. He is sensitive to everything that surrounds him, like a sponge absorbs any experience.

Such impressionability often leads to success in the literary field. You need to learn not to get depressed when things don’t go the way you want them to. You need to learn to sort through the various options before settling on the one that will bring the greatest spiritual satisfaction.

The latter is extremely important for such a person. Often, such people have not only developed intuition, but also paranormal abilities (telepathy, clairvoyance, prophecy) and even if they do not even use them to solve career problems, they still consider them as a useful tool in the struggle for existence.

Do not give the impression of being a reliable employee. Dreams and mystical inclinations of Neptune are incompatible with routine, discipline.

They are good in a profession that requires creative imagination and asceticism. These are people of art. They can be on stage and feel spiritual isolation. They are alone in the crowd. Not everyone understands their motives.

The highly developed have a mission to help people come to a higher vocation and spirituality. With bad aspects, there is a danger of getting entangled in scandalous stories and falling out of favor with the masses. Insecurity, alcoholism, drugs.

They should not allow themselves to be entangled in secret intrigues, especially if they are not aware of all the subtleties. Their personal secrets are no longer personal in the X house.

Advantages are that your spiritual passions enter your home. You are prone to mysticism, you have the heart of a pagan who feels a blood relationship with the planets and the cosmos.

The downside is that your psychic energy may go the wrong way, and the result will be fear, paranoia and an obsession with séances and black magic. You probably live near water, and the more the better.

Such Neptune is incompatible with routine and discipline. These are people of art. They are alone in the crowd.

For highly developed individuals (with good aspects), the purpose is to help people come to a higher understanding of spirituality. With bad aspects – the danger of being entangled in scandalous stories, alcoholism, drugs.

The talent of a born medium and empath, unconscious reading of the negative emotions of other people or the inability to cope with your own during an important event; the talent of an actor, writer, photographer, astrologer, psychologist and doctor, but a huge range of abilities often prevents him from being realized as a professional in one direction.

Suppression of rational thinking with fanatical ideas of ennobling the world and otherworldly insights, withdrawal into fantasy instead of real actions; the danger of being used by the authorities for their own selfish purposes: they can substitute, hang up other people’s waste, and fire them without explanation.

The habit of setting unattainable goals, but thanks to enormous creative and spiritual potential, sometimes it is really possible to achieve them contrary to the laws of logic and stereotypes of society (example of Barack Obama, the first black president of the United States).

Many owners of the Neptune-MC conjunction quite consciously pursue a career on a personal brand, composing fantastic stories of their ascent to success or romanticizing real events.

So did Bob Dylan, Elvis Presley and Walt Disney. The latter became an apologist for fairytale worlds and a dream factory. Bruce Lee, with the same aspect, based his image on the philosophical ideas of martial arts, which is also in the spirit of Neptune.

Often, the connection of the MC with the blue planet gives protection and patronage of higher powers, as well as a completely Hollywood development of events while moving towards the goal.

The native will have to fight stereotypes and rejection of his original ideas. Nobody believed Walt Disney that people would go to the cinema to see a mouse, but it was Mickey Mouse who became the symbol of American animation and the source of billions of dollars in income.

The mother of the owner of the horoscope has a strong influence on the development of his creative abilities, or through her there is an impetus to action.

Elvis Presley recorded the first song as a birthday present for his mother. He was not going to be a singer, but the brilliant path of the king of rock and roll began just from this episode.

It is possible that one of the parents is a creative person who guides the child on the right path, but the likelihood of religious fanaticism, alcohol and drug addiction, and carelessness in financial matters is high. In this case, the native will have to work off family karma.

The main problem of the native is the habit of being distracted from the goal by many not particularly important matters, as well as dependence on mood and emotional state.

Not everyone can be successful in several areas, like Elvis Presley, who combined concerts, military service, filming, charity and study of philosophical treatises.

Stress and frustration can devastate the owner of the aspect emotionally and prevent them from accomplishing the feat. Laziness, procrastination, daydreaming are also sidetracked.

It is necessary to develop a rule for structuring actions, regimes, plans, even for one day, not to mention time management for a month.

The first thing to do: choose the main direction for professional implementation, leaving the rest as a hobby.

Correctly set priorities are the key to a quick takeoff in your career.

The struck Neptune in conjunction with the Middle Heaven provokes deceptions and meanness on the part of high officials and gossip around. You need to double check contracts and not believe sweet promises, having the second option in stock.