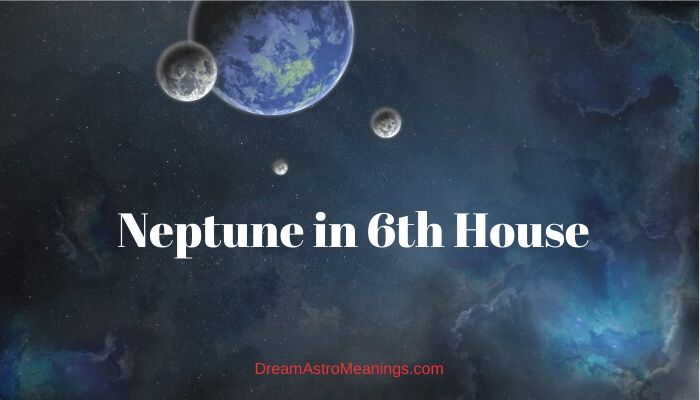 One of the most important components of each natal chart are astrological houses. Have you ever wondered what they were about?

Houses are twelve fields, each representing a part of your life; an essential segment of your overall life experience. When looking into houses, people would like to know about their experiences regarding specific areas of life.

Your chart would present with some houses full of planets and probably with empty houses. Some of them would be more dynamic, others less.

The astrologer could tell you when and how important role would a particular field of life have in your astrological destiny. Each house represents a field of life; let us learn about the sixth.

The Sixth House is linked to the native’s routine and habits, his or her professional life, mostly referring to the working environment, the relations with colleagues, the link between work, job and health.

This house is linked to work itself, as a process, struggles and efforts and all kinds of temptations and challenges.

In the Sixth House, it seems that everything has something to do with health. This field is also known as the House of Health.

The sixth field indicates advantages and favorable circumstances that possibly await the native, regarding all mentioned above, but it also indicates all kinds of inconveniences.

The sixth field is associated with skepticism, troubles at work, shame and trickery.

Some also call it the house of enmity and trickery, as this field is especially linked to such type of inconveniences in the working environment.

The House of Health, the sixth field has much to do with the native’s physical well-being and his or her attitude towards it. Link between occupation and health could be seen through the sixth field.

This house has to do with the native’s dietary habits, for example, the ways the native takes care about the health, both mental and physical.

The Sixth House is generally associated with our well-being and as such, it suggests the connection between our overall health and our general state of existence.

Maintaining good health help us cope with all kinds of inconveniences that come our way. Central themes of the sixth field are health, service and work.

Employment, including employers and employees both, people whom we serve and those who serve us are associated with this house.

Throughout all these relations and concepts, we have to stay healthy and sane, in order to function normally.

This house focuses us on our daily routine, habits, attitude towards diet, fitness and health, in order to help us maintain a good balance, much needed for a harmonious life, in relation to everything previously mentioned.

The Sixth House is the house of Virgo and its ruler is Mercury.

The god of the sea in Roman mythology, the counterpart of the Greek god Poseidon, Neptune had been changing his domain of rule more than once.

Early on, Neptune was identified and, to some degree, equated with Poseidon. Ancient mythological systems of old Greece and Rome are intertwined and very tightly connected.

Many details from both mythologies appear the same, although, in some cases, there were major differences.

Neptune was very likely the god of freshwaters, before he got to rule over the seas. The etymology of his name is very complex.

The name Neptune, Neptunus, is associated with several terms that have to do with water and moisture, but also with ‘covering’ and ‘marriage’.

Since this god was associated with Poseidon and identified with the Greek god in early times, it is almost impossible to reconstruct the theology about Neptune alone.

What we know of his cult is a festivity called Neptunalia. Neptunalia took place in July, during the height of the hot and dry summer season. The purpose of these festivities was to please Neptune, as a water deity, to give people enough water throughout the merciless sunny draught.

Therefore, we could easily assume Neptune was a freshwater god. The association with the sea could be seen through his genealogy myth.

In order to talk about this one, let us look into the Greek mythology. Poseidon, the god of the sea, was one of the three divine brothers who have shared the rule over the world.

According to the Greek gods’ genealogy myth, Cronus, the Titan, devoured his children, all except Zeus (Jupiter in Roman myth). Jupiter overthrew Cronus, released his siblings and divided the rule over the world.

Poseidon got to rule over the seas. Poseidon, however, did not seem as pleased as he perhaps should have been.

He fought his brother Zeus on many occasions and he stood for a violent, quick tempered, unpredictable god, a very moody fellow, indeed. Greeks associated him with sea storms and earthquakes.

It is said that he had a chariot pulled by his huge and majestic horses that ran so fast that the bottom of his vehicle did not touch the water, as he would ride out of his underwater palace.

Some versions of the myth have Poseidon younger than Zeus, others have him older and there were also some in which Cronus never have eaten him, because of his mother’s cunningness.

Another interesting mythology fact is that Poseidon and Neptune, as well, was also the god of horses. The myth says he created the first ever horse.

We know of Neptunus Equestris, roughly translated as Neptune of the Horses, although it is likely that the god named Consus was reinterpreted in such a fashion.

Now when we know something about the god planet Neptune was named after, let us see into this distant and blue astrological planet.

Planet Neptune is one of transcendental planets, and it falls under the so-called modern planets, since it had been discovered fairly recently; Uranus and Pluto are two other modern ones.

These planets could not be seen with the naked eye, so they were unknown in the ancient times.

Neptune is the Water planet and its nature is similar to that of its Water sign, Pisces.

Neptune is also a generational plant, meaning it affects whole generations of people, rather than an individual.

Some authors thus claim it rarely has a greater impact upon the native, but if it forms significant aspects with other planets in the chart, especially those personal ones, it would likely affect the native more.

This planet represents one’s soul desire to leave the boundaries of the earthly and tangible. Neptune awakens wanderlust for the realms beyond this life.

This planet is usually strong in artists, especially musicians and poets, spiritual guides, doctors, healers and priests, people with a strong intuition, dreamers and daydreamers. Too much of Neptune’s waters would poison you and make it difficult to distinguish real for unreal.

On the other hand, a proper dose of its elixir is a cure to the soul, a healing substance.

Neptune is associated with hypersensitivity, rich imagination and dreaminess, with platonic lovers, believers and all those spiritually inclined.

Neptune in the Sixth House – Neptune in 6th House

When Neptune is in the Sixth House, it would often distract you from your daily obligations and businesses, for such is the nature of the dreamy illusionist, Neptune.

However, Neptune’s fine and subtle touch in the Sixth House would depend on your overall personality and the attitude towards life.

Neptune is not particularly fond of a planned routine; it is a dreamy and imaginative planet that wants to set your soul free.

Some individuals with Neptune in the sixth field would actually have a great use of this placement; in their case, the placement of Neptune in the Sixth House is in almost perfect harmony with the rest of the chart.

These people function perfectly fine without having an established, well-planned routine. In fact, their routine is not to have a typical, strictly organized one.

While they have rituals and certain order in life, especially when it comes to health, diet and work, since these were highlights of the sixth field, they would never neglect their intuition and desires of their soul.

They could be amazingly flexible, without losing touch with the reality, the sense of responsibility and duty. They could combine the two for their own and others’ good.

However, things could turn the other way around, if aspects were not as favorable or the rest of the chart affects this placement in a particular way. In that case, natives are likely to avoid their duties, they could be forgetful and unreliable and very chaotic.

At one point, they realize having to organization and even a piece of routine does not serve them well, but are often too chaotic to get themselves together.

There is another interesting trait characteristic for the Sixth House Neptune people.

They easily lose sense of limits, when it comes to supporting and serving others. They want to help people and, while that is, in its essence, a positive thing and a good intention, it could cost too much.

Such natives often end up exploited and manipulated, but somehow they cannot resist.

The other scenario is that the native him or herself becomes too dependent on others who serve and indulge them, so, if there was no one around, they feel useless, helpless, confused and weak. Just as we have said when talking about Neptune.

Too much is dangerous, a little bit is a blessing. As always, moderation is crucial.

Natives with Neptune in the Sixth House could create their own world and perfectly balance between their real life duties, organization and habits, but they could still surrender to daydreaming and act out of intuition.

Alternative fields of interest, such as alternative medicine, might be the right choice to head towards, in case if having Neptune in the Sixth House.

That way, the native could combine the inner spiritual with physical and mental health and with service and work.