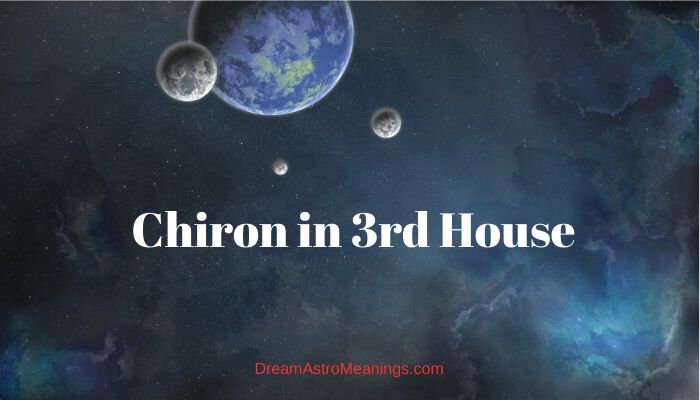 Horoscopes are more than the Sun sign, which is what most people equate the whole idea of horoscope with. Horoscopes include many elements and each plays an important role.

Besides the eight planets, the Sun and the Moon, there were other celestial bodies that should always be taken into consideration.

One of such elements in Chiron, our zodiac Achilles’ heel. Today we talk about Chiron in the Third House.

It includes the written and the spoken word, one’s abilities to express opinions, one’s demeanor, the channels of communication, the ability to make contacts through communication and else.

This house relates to the immediate surroundings, everyday contacts and communication, relations with neighbors, coworkers and especially brothers and sisters.

The third field is the field of earliest education, upbringing and childhood experiences. IT is also associated with movement and short trips.

The Third House tells about the native’s attitudes towards situations that require certain kind of solution. It has to do with logical, analytical, practical and problem-solving skills of the native.

The third house is about one’s ability to preset their ideas through words, mimics, gestures and else.

The Third House is analog with the sign of Gemini, it is an Air house and a cadent one.

As such, this house is related to concepts of the social and the intellectual and is associated with mutable qualities.

Understanding mythological background of astrological bodies could be of great use when interpreting the influence of particular heavenly bodies in natal horoscopes.

In Greek mythology, Chiron was a centaur, but not just any centaur. He stood for the fairest and the wisest of them all, which was not exactly the quality associated with centaurs.

Having in mind that centaurs, as a class of mythical beings, so to say, were not particularly pleasant fellows to have around, but wild, undisciplined and aggressive ones, Chiron was very different from the rest of his lot.

Chiron was a son of Titan Cronus and the Oceanid Philyra. According to one version of the myth, the Titan was in a form of the horse.

Iin another one, he shape-shifted into a horse, upon Rhea discovering the lovers. Chiron, the centaur, lived in a cave on the Mount Pelion, in Thessaly.

He was much unlike other centaurs, wise, noble, kind and fair. He was an immortal, the myths say. He was known as a tutor of many a Greek famed hero, such as Achilles, his best friend Patroclus, Jason, Actaeon, Phoenix, son of Amyntor and Aristaeus.

He also tutored and supported many immortals, such as Asclepius, the god of medicine, jolly Dyonisus and beautiful Apollo.

Chiron was a teacher, a tutor, a protector and a great advisor of kind and noble heart and a wise mind. Chiron taught heroes to hunt, ride, play instruments and practice medical and healing skills.

Besides heroes mentioned above, Chiron was a tutor of Heracles and the future hero’s great and dear friend.

As the destiny wanted so, one of Heracles’ arrows wounded Chiron and the centaur eventually swapped places with Prometheus, dying in his place, for he could not bear the immortal pains he suffered from.

Chiron was known as a great healer, but while he could heal and cure everyone else, he could not heal himself.

Heracles never wanted to harm his loving friend; it was an accident happened during his persecution of the wild centaurs. Chiron was injured, but he was immortal. The pain was so tormenting that he finally made a deal with Zeus and died in place of Prometheus.

This noble act made Chiron a deliverer of the greatest benefactor of the humankind, if we would see Prometheus in such light.

A variation of the myth says gods have taken Chiron into the heavens and so he became the constellation of Centaur or Sagittarius.

In the following paragraph, we shall see how the myth of Chiron reflects in the astrological planetoid Chiron.

Chiron was discovered in 1977 and designated as an asteroid. Although very small, Chiron is one of constitutive elements in astrology. Its effects are of great importance in natal chart interpretation.

Chiron is associated with the concept of pain and suffering, typically linked to Saturn.

Although effects of Saturn were distinctive, when it comes to hardship of life, it seems as if Chiron shapes it up in a specific and a delicate way.

Chiron gives us precious insights into areas of life in which we suffer the most. In a way, it teaches us how to deal with it; Chiron helps us to deal with our weaknesses, with pain and fields of life that appear under a blockage.

Chiron is both a wounded one and a healing one, just as the centaur in the Greek myth.

You are probably familiar with situations in which you could be of tremendous help to others, but you could not help yourself.

You could offer your best friend the best advice possible, but somehow it is so difficult to apply the same advice personally. Dealing with own pains is the hardest; Chiron represents such kind of a hardship.

In fact, Chiron represents a road of transformation through such a hardship. It is a bridge between Saturn, the ground, and Uranus, the sky. Chiron initiates us into our original and forgotten purposes.

Chiron does not bring us misery and pain, but it heals us. Its effects are subtle and healing.

While Saturn’s energy is meant to make us harder and strict, Uranus’ energy destroys such a form, inducing crises, forcing Saturn to create new and new forms.

Chiron’s energy affects the quality of newly created forms. Chiron represents our deepest psychological wounds, but it also points out the ways to heal it.

Chiron in the Third House – Chiron in 3rd House

Chiron shows the native’s most fragile points and suggests the cure.

People who have Chiron in the Third House are the most vulnerable when it comes to verbal communication and interaction with their surroundings and environment, taking something from it and trying to understand it.

The Third House, analog to Gemini, is the place where the thinking process starts.

In this field, the ability to notice and distinct details from the surroundings gets in touch with the subjective and personal reactions.

Everything that has to do with reading, writing, learning, speech and solving problems is related to this field.

Short trips, relationships with brothers and sisters are also what the third field was about, as we have already mentioned.

With Chiron in the Third House, the native feels as if their mind was unreliable, uncontrolled, chaotic and broken, in a certain way. This native, thus, has difficulties in comprehension of their surroundings, phenomena and events that take place in it.

Their mind does not make a proper selection of all the information from the surroundings, which results in a chaotic impression and inability to think reasonably.

However, they have a strong urge to understand everything. It could turn into an actual obsession and natives feel under constant pressure they created themselves.

They are very nervous, worried if they were right or wrong, unable to believe their own ideas and convictions.

On a good side, this also makes for a curious mind, insatiable for new knowledge.

These native often have problem to articulate their ideas and express them in public or, more likely, they constantly question themselves and doubt their verbal or communication skills in general.

On a bad side, these people would often use their insecurity regarding communication skills and expression to test and thus also torment and even offend other people.

Gossip and a secret desire to make others feel bad are a downside of this position of Chiron, only a proof of inability to deal with sensitivity related to communication skills. This is not a way to go and heal your weakness.

It would be best to employ the incredible communicational potential into creative expression. Writing columns, blogs, even working for a tabloid magazine could be a good way to channel the potential and give vent to yourself.

These natives should never underestimate their impressive communication skills and the key problem seems to be their self-doubt.

They should always find a way to use it. Natives with such an emphasis are sharp-minded, very efficient in solving-problems and intuitive.

Instead of envying others on their verbal or non-verbal ability to express ideas, you should actually believe in your own, instead of doubting it, which makes the whole idea of communication in the widest sense your weak, vulnerable point, something you were particularly sensitive about.

Use your communication skills as a cure. Chiron in the Third House makes the native capable of giving precious advices to other people; you can really cure people by using words.

In addition, they could inspire others to express their ideas more directly. Natives with Chiron in the Third House often rely on impressions and emotions, than on direct and rational communication.

They are anxious if they have verbally to express something, so the cure would be actually to dare to say things when you would rather not say anything.

They also often use humor to hide their fear; on a bright side, it could be a highly educative humor, for these natives are of sharp intellect.