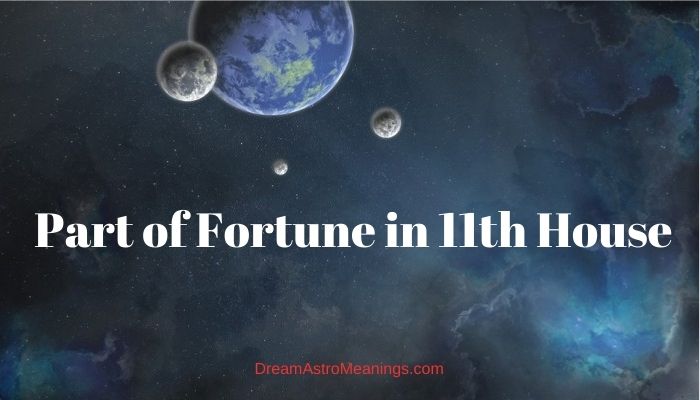 The eleventh house of the horoscope is responsible for friends and like-minded people. His analysis will tell you whether the collective is important for a person and how actively the native participates in his life.

The eleventh house is sometimes called the home of the guardian angel, who comes to the rescue in difficult times.

If the 5th field symbolizes the ability to express yourself and show your bright individuality, then the opposite 11th house says that you need to pay attention not only to your personality, but also to those around you.

The 11th house in its meaning has a close connection with Aquarius and Uranus, therefore the role of this field of the horoscope is expressed in interaction with groups of people and with the collective.

Only by associating ourselves with a certain community, we better and more fully understand ourselves and our goals.

In the end, you can achieve much more in life if you are supported by like-minded people and friendly people.

The more signs and planets the field under consideration includes, the more friends the native has.

The characteristics of the 11th house will describe the people with whom the owner of the horoscope most easily develops friendships.

Some astrologers associate the 11th field with our hopes, spiritual interests, desires and aspirations. Indeed, friendship develops a person spiritually.

Often being in a team, a person becomes more open and less selfish. Socially active people develop such qualities as humanity, tolerance, loyalty to others, and altruism.

A strong 11th house can have people whose activities have a pronounced social and humanistic orientation.

The 11th field is also of great importance for politicians for whom the support of voters is important.

It should also be noted that the 11th field, as well as the principles of Aquarius and Uranus, do not always have only a positive meaning.

When these principles are defeated, instability, changeability, the desire to destroy, but not create, are manifested in the character of the individual.

If the elements of the 11th field form tense connections with the planets in other houses of the horoscope, then this may indicate destructive influences on the corresponding spheres of life (home, family, health, work, etc.), as well as adverse life changes.

The value of the house in the analysis of compatibility When analyzing relationships (friendship, marriage, business, family), it is important to analyze the 11th field of the birth chart and the presence of partner’s planets in it. It is good if there are good planets in this house (for example, the Sun or Jupiter).

Such partners will be happy to communicate, share progressive ideas, inspire and inspire each other. The owner of a good planet will willingly come to the rescue of his friend in trouble.

If the partner’s Moon falls into the 11th field, then friendly relations become very warm, kind and emotionally comfortable.

Caring, mutual assistance, and willingness to tune in to the wave of another, the ability to listen and sympathize – these are the positive aspects of such a partnership.

Part of Fortune in 11th House – Meaning and Symbolism

In astrology, 11 House is not popular with kilometer values. They write about him briefly: friends, like-minded people, teams, hopes.

But often in reality, everything looks completely different. A person with a cluster of planets in XI may not be sociable, he has no friends, and he is terribly allergic to collectives.

Faced with this, astrology often shrugs its shoulders. From the series: the truth of the sky is not always available to mere mortals.

But now we will strongly refute this idea. In this article, you will learn the main meanings of the 11th House in astrology, as well as how to apply it.

Behind the decorations of combed XI meanings, there are many levels that you don’t even know existed.

To understand them, let’s turn to the main symbols of the 11th House in astrology – Aquarius, Saturn and Uranus.

Talk show authors know exactly the secrets of the 11th House. This explains why chatting programs are so popular. And the channel “Culture” is stuck in the last positions of the rating Aquarius is an air sign that is responsible for the streams of consciousness (the Angel pours water from the bowl).

The sun in Aquarius is expelled – it is quite difficult to reveal your individuality in a crowd. Any association of people, public opinion from the series: not for themselves, but for the sake of the country, people, Motherland.

The modern archetype is an infinite number of programs on television according to the principle: people come with their problems, which are actively discussed by the whole audience. Talk show “Let them talk” very accurately reflects Aquarius, especially the title.

It personifies social norms, a rule of behavior that is very difficult not to follow. Agree, it is psychologically difficult to come and get a job in shorts and flip-flops. This violates public opinion. This also includes such inventing society as:

Fashion is one of the brightest manifestations of the 11th House in astrology. The main principle is that I join the crowd. This is again an unspoken law.

For the opportunity to join the team, brands ask for a lot of money. Many fashion designers, trendsetters have a strong XI in their chart.

Instruments of 11 Houses in astrology – shame, fear of public accusation, shame. Remember the Soviet legacy: are you the smartest? Doesn’t show off! Everybody has children like children, and you! Do like everyone else. The party said!

If you go out in 17th century clothes now, they will look askance at you. You need to have a very strong Sun in order to decide on this.

Do you feel the pressure of Saturn behind these phrases? And most importantly, how often do you do something in obedience to the social trend?

Sometimes even to the detriment of their desires. This is one of the key, lethally working principles of the 11th House in astrology.

By the way, have you ever wondered why Saturn rules Aquarius? The Aquarian archetype is the night sky, made up of billions of stars, among which our Sun no longer seems so unusual.

As a person who is unique in himself. But in the crowd he is only one of a thousand like him.

Uranus is the highest symbol of the 11th House in astrology. I am an architect, I create my system, my order, my universe like a builder from different bricks.

Another manifestation of Uranus: I go against everyone. I am my own morality. Rebels, revolutionaries, geniuses with out-of-the-box thinking, homeless people.

All those who are not affected by the crowd rules. How do we treat such people?

Deep down, we are afraid of them or try to stay away from them. They don’t fit into the usual patterns. We don’t know what to expect from them.

On the other hand, revolutionaries, non-standard people are also part of the system, the algorithm.

For example, punk will be non-standard for an ordinary person, but at the same time, he himself belongs to a certain social group.

Therefore, the non-standard nature of Uranus and the revolution is only at first glance. Looking closely, you will see a completely different meaning in Uranus.

Lower cluster: for the law to exist, those who will break it are needed. Otherwise, any rule loses its original meaning.

The image of a lofty idea. A striking example is almost 70 years of Soviet power.

Eternal construction of communism for the sake of a brighter future. Slogans: Let’s fulfill the five-year plan in four years; we will win, we will build, we will do. Pay attention to the plural forms of the verbs.