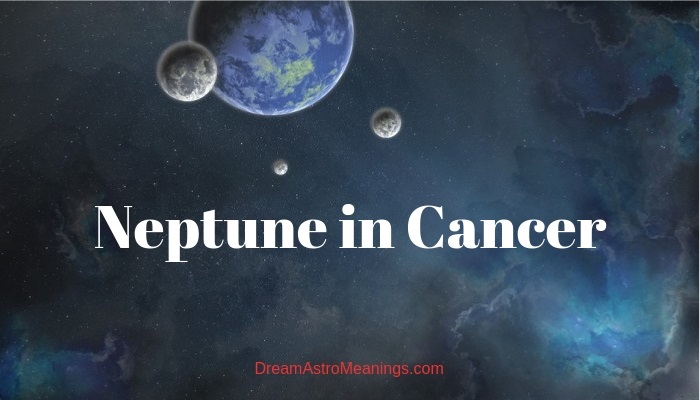 Neptune cannot be seen with a naked eye and it is the farthest planet from the Sun. This planet has 17 times larger mass than the Earth. It was discovered by chance through a mathematical calculation. It needs around 165 years to orbit around the Sun. The composition of this planet is mostly hydrogen and helium, and its interior is mostly rocks and ice. This is a very cold planet with a temperature of around -218°C.

The planet got its name from the Roman god of water and the sea. The Roman god Neptune is the equivalent of the Greek god Poseidon.

In astrology, Neptune is the master of illusions, deception, and confusion. It is the ruler of absentmindedness and absentminded and confused people. It lacks organization and precision. Everything is vague with Neptune.

This planet rules abnormalities in a person’s character and all kinds of strange and abnormal behavior.

This planet is the ruler of infidelity, adultery, bisexuality, betrayal, bigamy and bigamists, desires, scandals, all kinds of secrets, secret matters, perversion and perverts, polygamy and polygamists, as well as all kinds of similar behavior.

This planet has a deceptive nature and makes things as confusing and uncertain as possible.

This planet is a so-called transpersonal planet. The reason is that it travels through one sign during a period of 14 years, influencing all generations of people born during this period. Its influence is global and manifests in the affairs ruled by Neptune and the sign it is currently transiting.

The planet Neptune influences the appearance of mass religious and spiritual movements.

Those with prominent Neptune in their natal charts are very influenced by this planet, its aspects, as well as progressions and transits.

They are often dreamy and live in their own imaginary worlds. They tend to ignore reality when it is harsh and unpleasant and hide from problems by ignoring them or trying to forget them by using means such as drugs or alcohol.

These people are prone to addictions of all kinds mostly because of the weakness of their character. They lack persistence and strong will do confront the problems they have, and instead they choose to push them under the rug.

Many of these people have artistic talents and are very creative. They are able to create works of art of great beauty. In most cases, people under the influence of Neptune are beings with highly developed spirituality and many of them are very religious.

They also have a strong intuition or other psychic abilities. Many of them have a gift of reading people’s thoughts or are able to telepathically communicate with others. Many of them have hypnotic powers which they can use to influence or sometimes manipulate people into doing things they don’t want to do.

Neptune people are either naïve and prone to succumb to the influence of others, or they have the ability to manipulate other people for their own purpose.

Some of these people are prone to lying, deception, treachery, and another kind of immoral behavior. Many of them decide to do criminal activities which eventually lead them to problems with the law and ending up in prison.

People influenced by Neptune can be very sensitive to other people’s feelings and ready to help anyone. They can be very compassionate and understand people’s pain. In many cases these people end up being involved in charities and similar institutions where they help people. They often choose an occupation in this field.

Some of them are prone to isolation and distancing themselves from people.

Neptune’s influence can be very threatening to our mental health, especially in bad aspects. It can be the cause of mental illnesses or nerves disorders.

These people don’t have developed self-confidence and usually lack self-esteem. They need to work on developing faith in their abilities.

Many of these people are interested in secret knowledge and the occult. Many of them choose these areas as their occupation and earn a living doing them.

If we want to determine whether Neptune influences a person significantly, besides its sign, we need to check its placement in the natal chart and the aspects it is making. We also should consider the current transits and progressions and check if there are some Neptune related events that are awaiting that person soon.

In the article, we give you information about the traits of Neptune in the sign of Cancer.

These men are family oriented and mostly enjoy spending time in the company of their family members and people they love. They have a passion for cooking and many of them are excellent cooks.

Many of them choose professions in the restaurant or hotel industry and are very successful restaurant owners or hoteliers.

Some of them can be prone to addictive behavior, especially drinking alcohol, or having a tendency to avoid their problems because they lack the courage to confront them.

They should work on building their self-esteem and courage.

Women with Neptune in Cancer are usually very sensitive and emotional.

Their emotions are easily hurt so they have a very protective attitude and tendency to retreat whenever they sense something unpleasant might happen.

They need to get to know a person before being able to relax in their company.

These women usually have a heightened intuition and some psychic abilities which they use for the benefit of others. Some of them make their living doing psychic readings and similar activities.

These women usually have a nurturing nature and enjoy taking care of people they love.

Some of the good traits of Neptune in Cancer:

Some of the bad traits of Neptune in Cancer:

People with Neptune in Cancer are usually great fans of water and all things related to water.

They usually have their homes near some water surface, such as rivers, lakes, or the sea. These people often decide to live in a boathouse or own one for vacation purposes.

They are patriotic people and love their country very much, as much as they love their family. They tend to be biased and don’t admit any flaws to either of them. They love having a beautiful home which brings peace and tranquility to its occupants.

These people are usually great fans of cooking, and they love to do it, for their needs but also as their profession or business. They can be restaurant or tavern owners and make a living doing this business.

They are usually very sensitive and intuitive. They sense the feelings of other people and can relate to how they feel so they could easily help them with advice to overcome the issues they have. They can be great counselors to people with problems, especially of emotional nature.

They love tradition and are very appreciative and respectful of their ancestors. They can be prone to sacrifice something in their lives for the sake of their family and people they consider close.

Reality can sometimes be too harsh for these people to bear and they turn to escapism and isolation without trying to confront the issues they are encountering.

These people can be prone to secrecy and keeping their private matters to themselves. They can also be interested in practicing some secret knowledge because they are attracted to mysteries and mysticism.

They have difficulties with accepting and adapting to changes because they prefer things to stay as they are.

They also need their time to get to know people and relax in their company; that is the reason why they can be considered reserved and distant by the people who don’t know them well.

The planet Neptune influences generations of people while transiting through one sign during a span of around 14 years.

This is a transpersonal planet because its transit through a sign influences people as part of our society and not as individuals, and the changes and transformations it causes are usually related to the affairs ruled by Neptune and the sign Neptune is transiting through, in this case the sign of Cancer.

We should always remember to consult the house placement and the aspects Neptune is making when we are determining its influence on a certain individual, as well as the current transits and progressions.

People with Neptune in Cancer are usually traditional and love their country very much.

These people have a strong attachment to their family and are very proud of their ancestors. They love being around water and often choose to make their homes somewhere near water surfaces, like lakes, rivers, the sea.

They are sensitive and often empaths, easy sensing the feelings and emotions of the people around them.

Many of them have psychic abilities which they often use to help people and make a career out of doing it.