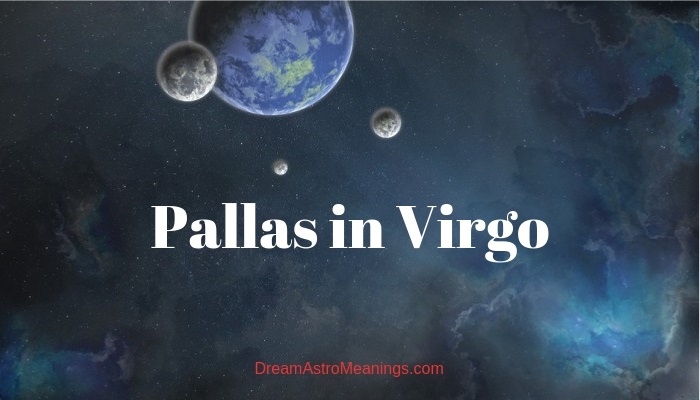 Pallas is an asteroid discovered after Ceres. This is one of the biggest asteroids in our Solar system and was discovered in 1802. Like Ceres, Pallas was also considered a planet at first, and was them reclassified as an asteroid. Its surface is mostly composed of silicates.

The name Pallas derives from the name of the ancient Greek goddess of war and wisdom, Pallas Athena. Athena was the daughter of Zeus, the supreme Greek god. Pallas was Athena’s good friend whom she killed by accident and in the memory of her friend and the tragic accident in which she lost her life, Athena adopted the name Pallas.

Asteroids in general symbolize the person’s feminine power. Pallas is not commonly used in astrological interpretations, which is a pity because it can be very useful in revealing some of the significant traits of a person’s character as well as their talents and special abilities.

The asteroid Pallas reveals our will to fight for our beliefs as well as our ability to take care of other people’s needs and wellbeing. This asteroid also reveals our relationship with our father, especially in a woman’s natal chart.

Pallas is a warrior and she fights for her beliefs and the things she believes are right. A person under Pallas’s influence makes careful plans about her actions and takes her time before reacting.

She doesn’t make rash decisions and she makes sure she avoids violence and aggression using her wisdom and intelligence. This asteroid reveals how intelligent we are and how perceptive we are.

It indicates our ability to strategize to make the right decisions and choices to accomplish our goals.

Pallas rules arts and creative skills, and because of that it is usually significant in the charts of people with artistic gifts and people who do something creative for a living. These are people able to create beautiful visual art forms as well as to do some creative work such as photography, movies, design, architecture, painting, sculpting, pottery, etc.

As we mentioned earlier, Pallas is the healer asteroid and is responsible for people’s healing abilities.

This asteroid rules different methods of healing, mostly the ones which use the power of the mind or some similar techniques in the process of self-healing or healing others.

These methods include meditation, visualizations, affirmations, hypnosis, healing with sound, healing with light or crystals, mind control, etc. People influenced by Pallas are easily healed by using such methods.

Also, people with bad aspects of Pallas often have weak characters, or they have an aggressive personality. Especially men influenced by Pallas tend to exhibit weakness and some feminine traits, such as passive behavior or dependency.

Also, women with strong Pallas influence can exhibit masculine traits and deny their female qualities. These women might be prone to acting aggressively and competitive, especially towards men.

This asteroid also indicates the manner in which we deal with the issues related to areas ruled by the sign and house where Pallas is placed.

Men with Pallas in Virgo are very precise and organized.

They are also very analytical and have a gift to spot the tiniest detail and then use all details and make the whole picture.

They are very detailed but they have a talent of presenting them in a simple manner so that everyone could understand the essence.

These people are promoters of healthy living and try to live and eat as healthy as they can.

Women with Pallas in Virgo are very good with their hands and can be skilled pottery artists, excellent dressmakers, or do some other crafts where details are put into an entirety.

They desire perfection and standards in all matters and they fight for its establishment in all areas of life. They are very organized and precise. They practice healthy living.

They nourish their body with healthy food and practice regularly. When they have healing powers they are usually related to proper nourishment and exercise.

People with Pallas in Virgo are very detailed but able to use these details and present their essence in a simple way.

They are also very organized, propagate healthy lifestyle, and fight for establishing standards in all areas of life.

People with Pallas in Virgo can become overly analytical and detailed.

They can often be unreasonable with their requests for establishing perfection and standards even in unrealistic conditions.

People with Pallas in Virgo are very analytical and perceptive.

They are able to see through the essence of things in the simplest way and also explain it to other people. They are able to gather all the details into a clear picture.

These people often use healing methods which consist of healing the body through purification and eating healthy food as well as working out.

They are often excellent nutritionists or herbalists.

When it comes to their artistic abilities, these people usually incline towards arts where details are put into a form, such as pottery, sewing, carpentry, etc.

Their aims are perfection in all areas of life.

People with Pallas in Virgo are organized, analytical, detailed, precise, and able to use all these skills to gather information and present it in the simplest possible way.

They know how to separate the important from the unimportant.

They are perfectionists and desire to establish standards in all areas of life. They advocate for healthy living and they make an example of themselves.

They use healthy eating and exercising as their methods for healing others.