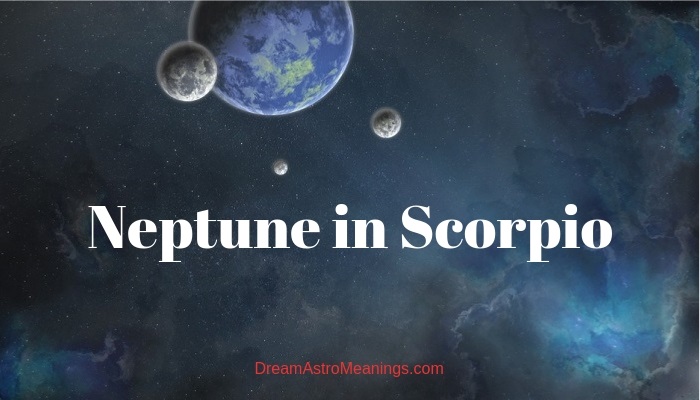 The planet Neptune is farthest from the Sun. This planet is 17 times heavier than the Earth, and is the third heaviest planet. This planet needs around 165 years to go around the Sun. It is very cold with a temperature of -218°C. Its interior is mostly composed of rocks and ice, while its atmosphere is composed of hydrogen, helium, and ice.

The name Neptune came from the Roman god of the sea and water in general. This god is the equivalent of the Greek god Poseidon. In astrology, Neptune is also considered the ruler of water and all matters related to water.

Neptune rules the nervous system, nerves, nervous characters and nervousness in general. It is the ruler of different kinds of mental disorders and disturbed mental states.

It is the ruler of obsessions, inferiority complex, idealism, worries, and weaknesses in general. It also rules hospitals and hospitalization.

Neptune is the planet of illusions and instability. People under its influence might be prone to escapism into imaginary worlds created by their vivid imagination. These people usually lack self-confidence and courage to confront life’s issues and they rather ignore them, or run away from them.

That is one of the major reasons why they are often prone to addictive behavior, especially using drugs or drinking because it helps them distance from real life and the problems they have.

This planet often encourages people’s illusions and false hopes. They can waste years believing in things that don’t exist. That is why its influence can often be very dangerous and the cause of many disappointments and broken dreams.

Wherever Neptune is involved there is always the danger of delusion and especially people with bad Neptune aspects or people who have Neptune as their horoscope ruler should be aware of that fact and try to live as realistic as possible.

Neptune creates people who are skilled at the art of deception, lying, and manipulating other people. This planet rules manipulators, schemers, and all kinds of con artists. These people use these skills to take advantage of others for their own benefit.

In some cases, Neptune makes people who are naïve and susceptible to deception and manipulation. These people believe in the good of all people and cannot imagine anyone wanting to harm them, and they get very disappointed when that happens.

Neptune is also the planet of deep emotions and love. It either brings fairy tale romances into people’s lives, or it brings them great love disappointments and sadness. Neptune rules love illusions and self-deception. It is also the cause of a lack of focus and confusion.

This planet rules artists and great works of art.

It is a transpersonal planet, which means that its transit through a sign has more influence on generations of people than on individuals. This planet needs around 14 years to go through one sign. That means that people born during that Neptune’s transit share the same traits of Neptune in that particular sign.

Because Neptune is the ruler of religion it often inspires the creation of new religions and the rise of new spiritual movements. In some cases it inspires the discovery of new ways of treating illnesses related to the mental health of people, problems with nerves and similar issues.

People who are influenced by Neptune can be very intuitive. They seem to feel what others feel and think. They can have some psychic gifts and similar powers, and often use them to help others. Some of them have a magnetic influence on others.

These people can be great idealists with a desire to live in an ideal world. They are helpful and gladly offer their help to people. They often work for charities and devote their lives to fulfill some humanitarian cause.

They can be very creative and able to create beautiful works of art. They are usually very spiritual and strive towards continuous development of their spirituality.

Many of these people don’t have enough self-confidence and courage to deal with the problems they are encountering. They often tend to ignore their problems until they grow to unimaginable proportions and become almost unsolvable. They often reach for some kind of addictions to help them escape from the things that are bothering them. They can be heavy drinkers or drug addicts.

Neptune influenced people with bad Neptune aspects can be prone to mental disorder and illnesses. Insanity is ruled by Neptune as well as hospitalization and isolation, and many people influenced by this planet end up in some form of mental institution.

Neptune also rules secret knowledge and secrets in general, and that is why these people are often interested in the mysteries of this world. Many of them study these matters and make them their occupation.

Neptune doesn’t influence everyone with the same intensity. Some people don’t feel its influence almost at all; the ones who have Neptune badly aspected, or as their ruler sense its influence strongly.

In the text, we talk about the traits of Neptune in the sign of Scorpio.

If Neptune is badly aspected in their natal chart, these men can be prone to experimenting with danger and challenging their boundaries. They could also become involved with obsessive and overly passionate partners (or they could exhibit these traits) and end up suffering a lot because of these involvements.

They are often interested in secret matters and knowledge and often exhibit some special powers, such as gifts of clairvoyance, telepathy, visions of the future, etc.

Many of these men are interested in astrology and actively use it.

Some even earn their living by doing astrological readings, or using some other special abilities they possess. They are often magnetically attractive and people are drawn to their power and intensity.

Women with Neptune in Scorpio are often mystical and magnetically attractive, especially if they have their Moon or Venus in close aspect to this planet, especially when they are conjunct Neptune.

People, and especially men, are drawn to the aura of mystery these women exude.

They can appear a bit witchy and people are either attracted to them and admire them, or they are afraid of them and don’t feel relaxed in their presence.

These women can have a hypnotic effect on others.

They can easily read people’s minds and use that to their advantage, but in most cases they use these abilities to help others. They usually have some psychic powers and make a living using them.

Some of the good traits of Neptune in Scorpio:

Some of the bad traits of Neptune in Scorpio:

The sign of Scorpio rules different kinds of secrets, and secrecy in general. Scorpio is the ruler of mysteries, the unknown, the occult, occult science, occult knowledge, occultists, as well as occult powers.

This sign is the ruler of death and death-related affairs. It rules graveyards, funerals, cremations, embalming, etc.

Neptune in Scorpio rules mysteries and secret matters. Its influence on a global level might trigger mass interest in the matters of occult sciences and knowledge, secrets, secret societies and knowledge, etc.

The generation born during this Neptune transit is most likely interested in these subjects and many of them chose to deeply involve their lives into their research. They are fascinated by mysteries, the unknown, and undiscovered, by the unseen, and secretive.

Many of these people have some unusual abilities, mystical powers, psychic powers; they are into magic and practice it. These people can have psychic abilities and use them for their own benefit, but also to help other people.

They have an unexplainable magnetism which fascinates people around them. They are powerful personalities which are not easily understood by average people. Some people might be afraid of their intensity and magnetism.

Regardless of how they might appear to others, these people have kind and helpful souls, although they might not appear that way. They are willing to use their knowledge and abilities to help other people, without asking anything in return.

Their quest for discovering the secrets of life and the Universe, as well as hidden knowledge and powers, often puts them in dangerous situations and endangering their wellbeing.

Many of them can be prone to experimenting with the power of their mind, using drugs or similar substances, which can lead them to addictions, ruining their health, and eventually leading them to death, or seriously ill.

The dark side of life and all its negative aspects attract these people.

They desire to test their boundaries and limitations and understand their unconscious motives. They often find themselves in dangerous situations, obsessive relationships, or doing immoral things.

These people, especially the ones with badly placed Neptune in their natal charts, could be very suspicious about other people’s motives and actions.

They could be very jealous, or fear being betrayed, and in many cases these fears are grounded and materialize in their lives. They can be very possessive and smother people who are close to them with that trait.

These people are capable of experiencing deep emotions for another person, and they usually desire to have a relationship where they could literally merge with their partner into one person. They are very passionate and a lover who is well remembered by their partners.

In some cases, they could exhibit a tendency to keep things to themselves and refuse to talk about important matters with the people who are close to them, which in turn creates relationship issues and threatens to ruin the relationship.

These men can have a pessimistic personality although they usually don’t have any reasons for pessimism in their life.

Neptune transits through the signs of the Zodiac influence the generations of people born during these transits.

That makes Neptune a transpersonal planet, unlike the personal planets which are the most responsible for creating people’s characters. the difference is in the time these planets transit through one sign.

While personal planets need around maximum of two months when they are in a direct mode to pass through a sign, Neptune needs 14 years to finish its travel through one sign.

That is why, Neptune influences the events and changes in the areas ruled by Neptune and the sign it currently transits.

Its influence on individuals can be seen as a combination of its placement in the natal chart of the person, as well as the aspects it is making with the planets in the chart. Current transits and progressions should also be looked at.

People who are born during Neptune’s transit through the sign of Scorpio, usually exhibit interest in the secretive side of life, secret knowledge, mysteries, and similar subjects.

These people often have some unnatural abilities and healing powers which they usually use to help others.