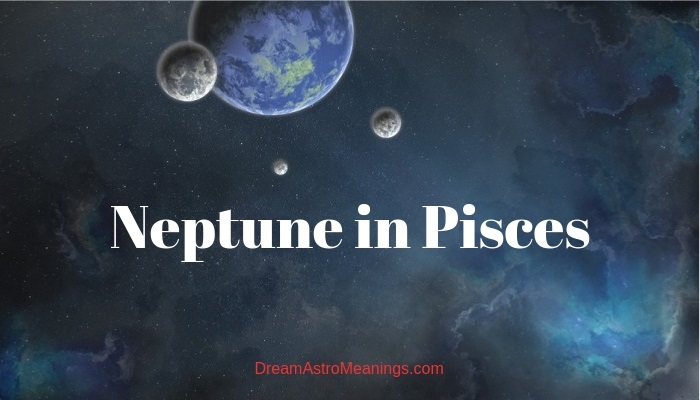 Astrology is a complex science or a pseudo science.

Today we are going to focus more on one particular transpersonal planet and its transit. It is Neptune in Pisces.

Neptune is one of transpersonal planets. It is takes 165 for Neptune to travel around the Sun, which makes this astrological planet affecting whole generations. It spends more than a decade in one zodiac sign, so its influence is usually observed from a wider perspective.

However, Neptune affects individual horoscopes, as well. Neptune is the planet of mysteries and illusions, imagination and intuition, creativity and inspiration.

Neptune sends us dreams and connects us with unreachable parts of our sub-consciousness.

You never know where you stand with it. Neptune represents the most mysterious part of one’s soul and the whole being. Neptune is a higher octave of planet Venus, being a transpersonal planet. In an individual horoscope, it represents spirituality, faith, magic and even religion.

Neptune awakens in people love and interest for everything that is distant, high, deep, hardly reachable. It applies both on imaginary and spiritual distances and territorial ones.  Neptune represents both delusions and self-delusions.

It inspires us, but it also deceives us and does not let us see things the way they are. It offers visions of what the world might be.

Neptune in Pisces – An overview

Neptune has entered the sign of Pisces in 2012 and it will remain there until 2026. Since we are living in the period of Neptune in Pisces, we will try to give you as much details as it is possible in our short story about this exquisite astrological period.

Since Neptune is ‘transpersonal planet’, it is thought it does not have great impact on an individual’s birth chart, but it does play a role. Each planet in a birth chart has its mysterious purpose and it affects our life.

This mysterious planet travels slow and for long. It is of essential importance to analyze transits of slow planets, such as Neptune, if we would like to know in what way our reality will be marked. What Neptune in Pisces brings?

Neptune in Pisces will have the greatest impact on those individuals that have accentuated Neptune and Jupiter in their birth charts.

The nature of this influence depends on how these planets are positioned in one’s natal chart. Pisces, cancers and Scorpios, the Water element signs, would possibly feel this transit more intensively.

The same should expect Taurus and Capricorn people, while Virgos, Sagittarius and Gemini would have to try to overcome their own limitations and start to understand Neptune’s messages, as it rules the sign that is in tense relation with the latter three.

On other plans, collective conspiracies, mass panic, deceit, poisoning and a state of hypnosis are also associated with Neptune in Pisces.

This transit brings the appearance of medications that are exactly the opposite of cure. A great number of false doctors, alternative practitioners with no actual experience and all sorts of trickery related to the area of medicine are all in association with this transit.

Disguised thieves and fraudsters of all sorts, everywhere. Pollution of earthly waters and extinctions of sea animals and marine flora. Sinking of ships.

This does not sound like a very bright future and we definitely feel consequences of such events; we are very aware now it is happening. However, everything always has its bright side. Not everything Neptune in Pisces brings is bad, on the contrary.

On a global plan, Neptune in Pisces manifests in the occurrence of truly benevolent and revolutionary doctors, true experts with brilliant ideas and new treatments.

This applies not only on conventional medicine, but also on alternative practices. People with new ideas about treating incurable diseases will come. Hidden treasures of the world are about to be discovered or re-discovered.

Neptune in Pisces is associated with traveling great distances and great depths. It manifests by real time travels around the world, but also by more mysterious travels; the ones that lead into depths of our soul.

Forgotten things in oceans, seas and rivers will see the light of the day once again. We could see this in some of the newest discoveries in aquatic archaeology of the modern day. One good example is the discovery of long ago lost ships of the famed Franklin’s expedition from nineteenth century.

Two great Victorian era Discovery service ships, Erebus and Terror, had been finally located in depths of the Arctic waters, after more than a century of mysteries surrounding the lost expedition.

Neptune in Pisces leads us to more spiritual discoveries, as well. It takes deep into hidden depths of our own soul. People start turning to spirituality and faith; we are about to reconnect with mystical forces that rule the universe. Neptune in Pisces teaches us to be less arrogant and to accept our imperfections; our greed is perhaps about to soften.

Neptune in Pisces, with some other aspects considered, is responsible for the occurrence of counter-intelligence services in all spheres of global society. The main purpose and the call of these services are to stand for peace, justice and harmony between people.

Moreover, astrological analyses suggest they could be successful in it. However, it is a long road, we can as well see it.

We are becoming aware of the fact that true treasures lie in things and ideas from the past and that not only what is new and advanced is worthy of our respect.

This is a precious notion, because it is a turnover pint in the way how we think about everything in life. New projects should be based upon firm and grounded bases; the foundation stone of new projects will have the greatest value.

People are becoming aware of the fact that if we want something to last, it should have deep roots and foundations made of stone. Tradition and traditional values are becoming our ‘new’ inspiration.

IT is also important to consider the influence of Pluto and Saturn in this period of Neptune in Pisces. People are generally becoming more intuitive. There are things we cannot logically perceive, but we can intuitively feel them.

What is more important, we are about to let go of our need to logically interpret everything and we will surrender to our intuition, to a reasonable point. This is relieving and a good course, in general.

Neptune in Pisces – In signs

Neptune is, besides everything else, the planet of talents, imagination, romantics. In Pisces, its natural place, its energy is natural; this means people who are generally good at sports and artistic disciplines could expect achievements.

Neptune in Pisces is in favor with theatre performances, cinematography, composing music.

It greatly depends on your natal chart how Neptune in Pisces would manifest. For some people, it is like a guardian angel that inspires, for others it is almost demoniac, always making one suspicious about conspiracy theories and all sorts of deceit and illusions.

It is important to look for the place of Neptune in astrological houses and aspects it has with personal planets, in an individual horoscope. Neptune in Pisces will affect Water and Earth element signs and then others.

Neptune in Pisces brings excitement in the area of love to Cancers. Those that are single are about to meet a new love; it is a period of amorousness for single Cancers. However, for those that are taken, it brings turbulence. They could meet someone really charismatic and magnetic, which could shake their family peace and make it out of balance.

Scorpio could become closer with an artistic person, with a foreigner or a person living in another town or abroad. They could meet love of their life in another country. If they work with media, Scorpios could expect success, especially if they had problems in the previous period.

Pisces, with Neptune in their ruling sign and its home, should expect great career changes and good outcomes.

Pisces will have great support of influential friends, their family and friends. They could find love in their working environment, especially if they travel a lot. Generally, this is a favorable period for Pisces, especially those engaged with performing arts and sports, but also scientists, doctors, alternative healers.

Some of them are about to face life-changing opportunities, in terms of career. Perfectionist Virgos would feel more passionate and amorous than usual. Excitement in the field of love awaits them, but also jealous scenes. Good job opportunities for those in public domain.

For Capricorns, Neptune in Pisces brings secret affections, romantic messages, and platonic kind of love. Awakening of some old sympathies are very possible. Aries should also expect connections with people abroad, in professional sense. Single ones could start a relationship, but those in a relationship are at risk of secret love affairs and adultery.

Leos should stay away of authoritative type of people who like to win trophies. It means they should think twice about starting any sort of a relationship with someone very influential, because they might cast them away very easily.

Some Leos could expect widening of the family, especially those who are about to get married the second time.

Sagittarius could expect new sources of income, possibly in the area of real estates and possibly somehow related to their romantic partner. Someone attractive and determined will try to win them over and will not regret any effort.

Neptune in Pisces favors Gemini people and offers them great opportunities in making new social and professional connections, which what Gemini are very good at.

To Libras, Neptune in Pisces brings indecisiveness in the field of love, because they will be very amorous and there will be many interesting candidates for them. However, most of them will feel fine with that, because they enjoy being in that special amorous state.

It depends on an individual, of course. Aquarius people should expect gradual professional success, popularity and fame.

Let us go through good sides of having Neptune in Pisces in your natal chart. Neptune in Pisces is associated with kindness and generosity, so people with such an astrological element in their chart have great understanding of others.

They are deeply emotional, tolerant and they have brilliant intuition. They listen to others, comfort them and give them precious advices.

With good aspects, people with Neptune in Pisces are fascinated with everything mystical and out of this world.

They are spiritual, they have great imagination and they are interested in metaphysics, dreams, psychology and else. They are extremely imaginative and creative and they can express it and practically use. They could be bestseller novelists, great artists, musicians, actors.

Bad sides of Neptune in Pisces makes one delusional and lost between the truth and reality, oriented towards dark mystical forces, always in need to dig deeper, but not in a good direction.

They are at risk of addictions and all sorts of vices.

Those with bad aspects for Neptune in Pisces cannot channel this incredible energy well, so they become gullible and easily seduced by harmful and dangerous ideas.

Neptune in Pisces Man and Woman

Men with Neptune in Pisces are intuitive and usually interested in sports or performing arts; they have strong desire to express their ideas and feelings or even their visions.

They are generous and caring men, always in search for love. Women with Neptune in Pisces are more mysterious, maybe less expressive, but they share the same passion for everything creative. They enjoy being in love.

Neptune in Pisces could be felt everywhere, if we pay more attention and try to connect things happening in our world.

Some things that are currently happening on global plan could be astrologically identified as direct impact of Neptune Pisces transit.

In an individual birth chart, it depends greatly what aspects Neptune creates with luminaries and with Venus. Its position in houses also matters a lot.

However, generations of people with Neptune in Pisces carry its magical influence.