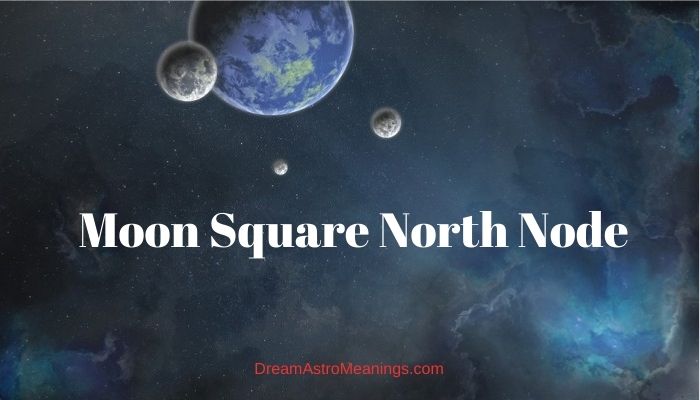 Now that everyone is talking about eclipses, it seems like a good time to brush up on Moon Nodes.

It turns out that eclipses always happen near the nodes, and this is not by chance … Their character as accelerators of destiny comes from there, precisely.

The Lunar Nodes are not planets or asteroids; these are the points where the Moon’s orbit intersects the Earth’s orbit. They are also known as Dragon Head and Tail or as the Nodes of Karma. They tell us about the baggage we bring and how to level it.

Karmic Astrology considers that the Lunar Nodes hold very important information about the karma that we have accumulated from past lives and the path that we must complete in our current incarnation.

The sign and the house in which it is located can give many clues about what the experience you had in other lives was like. It feels like the imprint that has been left on your soul without you being able to do much to avoid it.

It tells us about memories, the unconscious, experiences already lived, fears, phobias and blockages that we cannot find the reason for, attitudes we take without being very sure what motivates them and the reactions that we choose more easily (acquired behavior patterns)

The symbol of the North Node is the same as the South Node but inverted. It will be right at the opposite point on the zodiac wheel from where your South Node is.

It tells us where you are going, the path you have to follow according to the evolution of your karma. It involves making a great effort and correcting behaviors…

For example, imagine that in past lives you were a powerful person and were used to abusing your position of authority (A South Node in Leo in the 10th house, for example …).

The logical thing is that in this incarnation touches you to learn the value of solidarity and the need to take care of others (North Node in Aquarius at home 4) this is why the nodes are facing each other. We need to balance.

The information that the North Node reveals to us is of vital importance in defining the path of our evolution. We have all come here with the goal of improving as people.

Ascendant and North Node provide us with very valuable information on how we should do it. Do not underestimate it and reflect on it…

Look for the North Node in your natal chart and give a couple of turns to the information that it suggests … Better yet, look for the South Node … You may find answers to many of the automatisms in your way of Act. They are worth considering.

The psychological (strengths and weaknesses of the person); the predictive (life stages); and the spiritual, which starts from the belief that we are the link in a long energy chain that develops over several lifetimes.

Well, it is in this last interpretive level of the natal chart, (the spiritual), where the North Node / South Node axis is located (also called lunar nodes or Karma nodes).

The lunar nodes are not planets. They are two points where the paths (ecliptic) of the Moon and the Sun intersect, seen from the Earth.

Often, only the location of the North Node is included in the Birth Chart, for two reasons: because it is the most important (it is the one that tells us about our mission in this life), and because knowing where the North Node is, is very It is easy to know where the South Node is, since it is 180 degrees from the North Node (in opposition, that is, in the opposite sign).

The South Node tells us what we have already learned in previous lives, and the North Node provides information about what we have to learn in this one.

It is important to understand that what we have incorporated “as standard”, and therefore, our natural tendency, is the one that has to do with our South Node. It is the known, what comes out effortlessly.

The challenge, therefore, consists of leaving the comfort zone represented by our South Node and entering the unknown, which is what our North Node requires of us, in order to grow and evolve.

That is why we speak of “mission” in relation to the North Node: because it is something to be achieved, and therefore, it will require time and effort to carry it out.

Let’s see below what the location of the North Node / South Node axis indicates about our life mission, depending on where it is located:

The North Node in Aries (and South Node in Libra), indicate that what you learned in the past life is to collaborate, to establish harmonious relationships and to be very aware of others. You have already learned this, therefore the lesson for this life is to develop your independence.

You have to learn to define and pursue your own goals and to defend your point of view instead of being guided by the goals and opinions of others.

The North Node in Taurus (South Node in Scorpio) indicate that in the past life you had to face painful situations imposed by others and many drastic changes.

The lesson that awaits you in this life is to build your own solid system of values ​​that allows you to achieve your goals and financial resources by yourself, without depending on others.

With the Moon square north node Gemini (South Node in Sagittarius) the tendency is to be somewhat philosophical and to give great importance to the ideas and approaches of wise and educated people.

It is therefore that in this life you appreciate the point of view of each one equally and especially, that you learn to value your own intelligence, your knowledge and training, without being insecure by not having the best training or the greater number of degrees or certificates. It is also possible that you have to live karmic experiences through a sibling.

The Moon square north node Cancer (South Node in Capricorn) means that in the past you ignored the importance of emotions and feelings, focusing on achieving recognition in your work and achieving goals. You already learned that.

In this life, the lesson will be to let your feelings surface, develop true affection and show your loved ones that you are capable of giving yourself without expecting anything in return.

There is also the possibility that you have to experience that karma through powerful experiences with your father or mother.

The Moon square north node Leo (South Node in Aquarius) points out that your lesson in this life is to develop confidence in yourself, in your creativity and in your own way of seeing things, since in the past life you already turned in pleasing your community and improving the conditions of your environment and society.

Being in South Node in Pisces, in the previous life you sacrificed yourself for other people and lived through emotions and a spiritual vision of life.

Now, you must learn to discriminate, to choose what should be preserved and cared for and what should not. You have to continue giving a service, but in more specific and practical functions, preserving the Piscean tenderness and warmth that you already learned in past lives.

Normally this Node implies powerful experiences through couple relationships in this life, since your mission is to learn to relate in a harmonious and balanced way with others.

If you have the Moon square north node Scorpio and the South Node in Taurus, it means that probably in the previous life you focused on ensuring the tangible and material part of life, clinging to the known and ignoring the more spiritual or elevated part.

In this life, you are required so that, apart from generating material resources and defending what is yours, you experiment with higher and uncontrollable energies, incorporate the intangible part of life and share your resources (physical or material), with others.

This nodal position will also make you integrate that life is changes and that, therefore, you have to accept them and not see them as negative.

The South Node in Gemini makes you comfortable with shallowness and indecision, so the Moon square north node Sagittarius is going to demand that you take sides and commit. It is also possible that life makes you live experiences related to abroad or with foreign people.

If you have the South Node in Cancer, then it is that your natural tendency is to seek affection, protection and security in others, because it is difficult for you to autonomously assume your own challenges and objectives.

The lesson to be learned with the Moon square north node Capricorn is to learn to carry out adult responsibilities self-sufficiently without waiting for others to do it for you or pretending that they are constantly giving you love and support.

If you have the South Node in Leo, it means that in the previous life your tendency was to think that your way of doing things was the only valid one and that you did not have to collaborate with others.

It is therefore, with the Moon square north node Aquarius, to remain self-centered and pursue your dreams, but surpassing your South Node tendency, that is, learning humility and being considerate of your environment.

The Moon square north node Pisces (and therefore the South Node in Virgo), indicate that you have to learn not to be so rigid and structured.

Trust that you have enough common sense, and without fear, dive into exploring the intangible and spiritual side of life!

Surely life will propose psychic experiences impossible to understand with the mind so that you open yourself to other possibilities of understanding existence.

The Moon square north node indicates that in the past you were too individualistic and did not take into account the needs or wants of others.

It is then that in this life you continue to pursue your goals and objectives with the same energy but with a more collaborative and committed spirit.