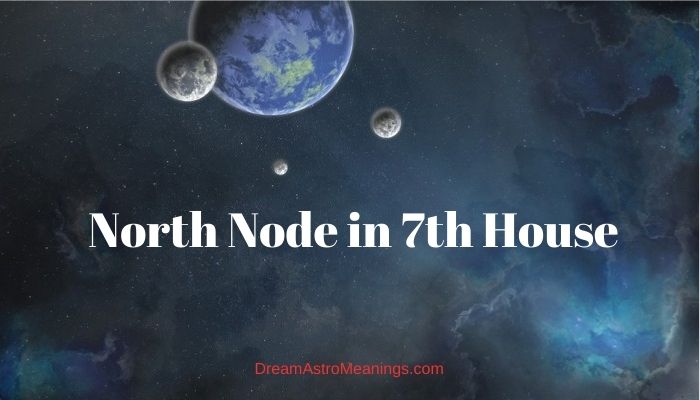 First, let’s talk about the North node in a general way, that is, not applied to any specific individual but in reference to what happens in the sky on a daily basis and that we must take into account for our advancement.

Knowing where the North node are at all times is knowing the challenges that you will have to face each year, therefore, such information can be of tremendous use to us.

The Lunar Nodes or Nodes of Karma are not any star, asteroid, planet or satellite of the universe. They are mathematical points in the sky where the orbit of the moon intersects the orbit of the earth.

Their movement is retrograde, that is to say that we perceive them as if they were going backwards in the sky and in a clockwise direction within an astral chart.

As the North node are two, one of them is called the North Node and the other South Node.

The North Node is so called because it speaks of the direction of advance, in other words, what we must learn or include its characteristics in our lives during the period in which the nodes are there.

The South Node informs us of what we have to release or heal during this period. All the Axis signs have to be North Node and South Node, in such a way that if the Nodes fall into an Axis during a period, the next time they pass through there, the nodes will be positioned inversely.

So, with all the signs. In this way, karma ensures balance throughout the zodiac.

True Nodes: It counts the lunar orbit, that is, not only the mathematical point itself but the energy that surrounds it.

In this way, the nodes would reach a specific location earlier, since the energy that surrounds and influences it is also considered a “node”.

Mean Nodes: It does not consider the lunar orbit, that is, only the location of the mathematical point itself will be taken into account and nothing else.

Now let’s talk about the native North node. The natal North node inform us of where the nodes were at the time of our birth and determine our personal life mission, the one that we will be learning and performing throughout our lives.

To recognize the North and South Node in an astral chart you must look for these symbols (In your natal chart, if you find one, look for the opposite end and there you will find the other.

If only the North Node appeared, the South Node would be 180 degrees, that is, on the opposite side).

Once in the 7th House, the “I” is ready to begin to relate to others. In this House, the personality learns that it cannot develop alone and therefore this is the House of relationships.

House 7 marks the Descending sign, the westernmost point of the birth chart, that is, the sign that was being placed on the western horizon at the moment of birth.

With the 6th House, the last of the “Personal Houses”, the person knows exactly what he is like and what distinguishes him from the others.

He recognizes that he is unique. From the First to the Sixth House, the personality evolved and improved through work, service to others, humility, and the attention that he paid to the world around him.

Here, “marriage” is understood as any type of relationship that involves a commitment over time, such as marriage itself, a business relationship, partnerships, contracts, negotiations, diplomacy, agreements, and declared enemies.

The Descendant sign is the cusp (initial line) of the 7th House, the third angular House of the birth chart and the point opposite the Ascendant sign.

The Descendant, the westernmost point in the birth chart, disappears when we are born. So it seems to hide what’s inside of us. It reflects what we think we are not, what we do not want to admit exists in our personality.

For Astrology, the qualities that we look for in relationships (described by the planets and signs present in House 7) represent what we reject in ourselves but that, in some way, we need to integrate into our personality to feel complete.

Then, since we do not recognize them in ourselves, let us look in others. In the people with whom we seek to relate.

For example, if we have an entrepreneurial spirit, but we do not have a vocation for numbers, we will have to find a business partner with recognized capacity for calculations and finances.

It is a complement, an improvement of our capabilities, looking for someone to complete us and help us evolve and achieve our goals.

After all, when we cooperate with others, make contracts and partnerships, we are also helping ourselves.

In traditional Astrology, the Ascendant sign is considered “self-awareness” and the Descending sign as “the consciousness of others.”

The 7th house describes our relationships, the qualities we look for in our partner (love, friendship, and work) and the experiences we need to live to understand the meaning of others.

Studying the Descending sign allows us to discover the type of people who appear in our lives with whom we tend to create true connections, the qualities we would like to see in our romantic partner, or what attracts us in others.

By studying the planets and signs present in the 7th House, astrologers indicate the type of people that attract us. What qualities do we value and look for in others. For example, a person with the Moon in the 7th House, can look for a partner to take care of and care for her.

A person with Mars in the 7th House can value other qualities in a partner, such as strength, dynamism and the ability to take action. It can also mean that she is looking for someone to make the decisions, to guide her through life.

In situations where there is more than one planet positioned in the 7th House, the reading is more complex as there are multiple characteristics of different planets that influence the same House.

A person with Uranus and Saturn in the 7th House can indicate the search for someone who provides stability and security (transmitted by Saturn), but also an individualistic and unpredictable person (characteristics of Uranus).

In addition to describing the nature of the couple, the signs and planets positioned in the 7th House, they suggest the types of relationships that the person seeks or with which they identify most.

Taking into account that House 7 is committed to House 1, what we look for in others is reflected in who we are, our own personality. In this sense, the two Houses are related to relationships and this axis is highly considered in the reading of the birth chart.

For a relationship to be successful, in love, in friendship or at work, we tend to relate to the people with whom we identify.

Frequent coexistence, joint decision-making, negotiation of interests presupposes a set of values and an aligned vision of life. Otherwise, it is difficult to reach consensus and compromise or even understand the other’s position and options.

The presence of Saturn can indicate a relationship based on duties and obligations. Mars is more prone to “love at first sight”, relationship distress, spontaneous decision-making, stormy and passionate relationships. Jupiter reveals the possibility of multiple relationships.

In this context, karma has no negative connotation. It is the body of experiences that supports – or does not support – the evolutionary growth of the soul. Karma also includes resources and supports. The question is whether our resources and supports help us grow, or keep us in the safe loop while still trapping us.

The south node usually retains energy, repeats the pattern, and takes refuge in the known. The north node challenges us to get out of the known narrative, to explore beyond the familiar.

The north node points to the door that opens to new potentials. Potentials that challenge our tendency to stay safe and familiar, even if it means stopping growing. Choosing to grow is an essential step to evolve. The desire to grow is the evolutionary desire of the soul.

Jupiter, on the other hand, is the planet leading the transformation (liberation) needed – from the moon’s south node pole – in order to embrace the lessons of the north node.

We enter into an affective, economic, creative and spiritual review process that accompanies us into the year. This review gets off to a strong start this May.

During its retro gradation into Gemini, Venus will be dancing square Neptune in Pisces. There is confusion, and there are affective-mental traps, which interfere with our clarity of direction and purpose. It is not the time to make final decisions, no matter how ideal the painting is.

Somehow, until the middle of July, we are in transition between the energy of Cancer (sign that the north node leaves behind) towards the energy of Gemini.

This is an emotional cognitive transition. Mercury – leader of the north node of the moon – retrograde in Cancer (in June) tells us of a process of digestion and metabolization of somatic emotional information (Moon-Cancer) to the cognitive integration of this information.

It is a transition from the emotional to the mental to develop and strengthen our ability to build evolving affective relationships.

Without the compass and the wisdom of our emotions, we are prey to mental desires, which make us imagine possible worlds and which – in the depth of our being – reveal our dissatisfaction and affective malnutrition.

Hearing the voice of our deepest need is part of the evolutionary journey of these next two months.

The time and energy we invest now in clarifying our emotional communication – internal first, external later – is going to prove invaluable in the long run.

The north node of the moon enhances the knowledge and truth that springs from our experiential experience.

The south node in Sagittarius tells us that there is no philosophy, no religion, no theory, no studies, and no academy that is more truthful than the powerful compass of our emotions.