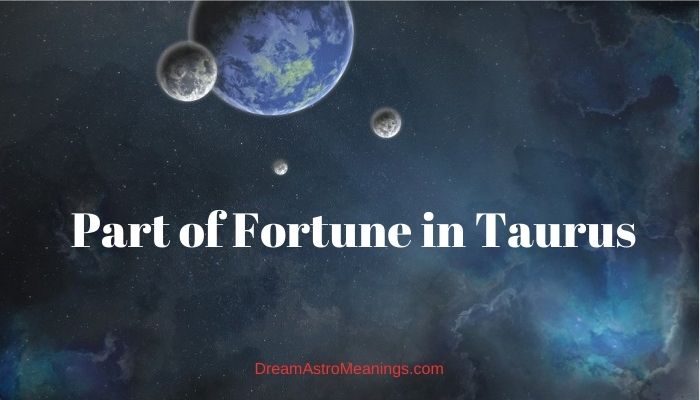 The Major Arcana number X warns us of the illusion of remaining in an uninterrupted and eternal state.

When The Part of Fortune comes out in one print we can ask ourselves, am I repeating something? Should I close something from the past? What should I start now?

In psychotherapy you can express to us the importance of flowing with life. His psychology has to do with addictions, attachment, obsessions, etc.

In the comments we can talk better about its specific symbolism. Tell us, what does the image of The Part of Fortune make you feel?

The Part or Part of Fortune is one of the so-called “Arab parts” of Astrology. The parts are points calculated on the maps from two or three different points.

The Arabs put a lot of emphasis on the parts for being excellent mathematicians and everything that could be calculated was the target of their preference.

However, detailed research shows that these parts were already known to the Greeks and perhaps much earlier. Ptolemy solemnly ignored them and mentions only the Part of Fortune in his maximum work, the Tetrabiblos and, for this reason, they were despised by medieval astrologers. However, the Arabs rescued them.

According to some authors, it symbolizes what we can do with our body during this incarnation that we are living. So it involves health, skills and interpersonal relationships, which ends up becoming “prosperity”.

Others associate it with the cyclical movement of life: up, down, down, up again. However, as time went by, the meaning of “destiny” prevailed in the Tarot and “prosperity” in Astrology.

In order to interpret it, one must verify in which sign and in which house it is. There are controversies about whether it forms aspects or not.

From a technical point of view, the parts bear great similarity with the aspects, since they are calculated from positions of the Ascendant and the planets.

For me, there is little point in considering aspects, although it is very interesting if the Fortune part or any other part overlaps with a planet or a focal point (as if it were a conjunction).

There are also controversies in its calculation. Ptolemy used an extremely complex process, however, later, it was simplified to a method that produces a result very close to Ptolemy’s numerical juggling.

Another controversial point is that the parts are calculated differently for night and day maps. Ptolemy chose not to make any differences, but it seems that among ancient astrologers he was one of the few to think so.

A daytime map, is one in which the sun is at the top of the map, roughly corresponds to a map where the analyzed person was born during the day (after six in the morning until approximately six in the afternoon). And nocturnal, the opposite. Remember to consider the person’s daylight saving time and birthplace.

Values ​​must be calculated absolutely. However, normally the notation to designate a planetary position is relative to the sign where the star or focal point is.

Talking about the sign of Taurus means talking about a sign that is fascinated by everything material, but also enjoys seeing the results of its efforts.

Those who are governed by this sign love beauty, but true beauty. Their characteristic is self-assurance. If you want to know everything about Taurus, pay attention because we give you all the keys to the Meaning of the Sign of Taurus in the horoscope.

Taurus are a sign that is not only identified with sanity, beauty, decision or touching your feet on the ground. Its ruler is Venus, which makes its meaning in the horoscope also that of sensuality.

Taurus enjoy sensuality but also tact to say things, both in the work environment and in the sentimental aspects that govern their person.

The sign of Taurus also has a very pure meaning of things, and on the other hand it is too determined and too stubborn. Many times based on that stubbornness it manages to achieve things.

He is usually stable in his way of life and conservative in many aspects that surround his life. They get things based on stubbornness.

They like to work with their hands. They love the natural. Since it is an earth sign, it knows how to stomp. Your concern revolves around safety most of the time. It is a protective sign. Strong. Dominant. They make money very easily. They are good at saving too and for any type of investment.

Let’s see in more detail the meaning of Taurus in the horoscope based on each aspect of life.

The sign of Taurus is decisive and compliant. If you have made a decision, you abide by it and do not back down. It does not usually deviate from its path.

They are perfectionists, they spend a lot of time at work, but they are also open when friendship arises. They are almost always there where they are needed regardless of what has to do with what may arouse desire in them, regardless of how negative life may be.

This earth sign is ruled by Venus, which, in addition to representing love, also does so in terms of attraction and imagination. Taurus will stand out for many aspects, including being a great little kitchen, he can become an artist.

His fidelity is great. He resists changing aspects of his life, especially those in which he has sown and obtained fruits to which he dedicates himself with dedication.

The possible health problems that can occur in the sign of Taurus revolve around the neck and throat. These are highly sensitive areas that you should be careful with. If you know someone from Taurus, be sure that it is a sign that will not disappoint you.

Of course, they are very practical and decisive, even if they are immersed in a situation where chaos predominates.

When they realize that it is not wrong to be guided by instinct, they usually project joy into their lives. For the rest, their head is sometimes focused on making money and sometimes, since they are tenacious, they will not stop until they get it.

Taurus is one of the signs that is very nice, and that gives more value to touch than to form. Touch excites those born under this zodiacal house. Sexual relations with Taurus usually always depend on the bond we have.

If we are a couple of a Taurus he will surrender to us since they understand sex as the maximum expression of love towards the loved one.

If it is an occasional encounter, it will be somewhat more complicated. Taurus is determined but also quite shy so he may be one of those who does not take the first step.

In general, those who are a Taurus sign tend to establish romantic ties with partners from the same social environment, they are very careful in that sense. They also sometimes look for someone who understands them but who gives those things, that of course.

Taurus is a sign with a great sense of humor. It can become an ideal company. Likes to work at home.

Respect family values. When you establish bonds of trust with your friends, you make the friendship for life, in fact many of your friendships have been preserved since childhood.

Among the values ​​to highlight in the people of the Taurus sign are loyalty, they are in solidarity with friends, especially with those who grew up with him.

Taurus is one of those signs that takes everything they say to the letter, especially when it comes to promises.

Part of Fortune in Taurus– Meaning and Symbolism

It is convenient to develop determination and interest in material and economic goods as well as manual skill in order to obtain greater economic gains. Prudence and his harmonious and affectionate character will benefit him.

Well-being thanks to material goods, their administration and their enjoyment. Happiness through personal relationships and your artistic abilities. You must control your stubbornness, brusqueness, and laziness.

It is related to the understanding of the physical world through the senses: taste, touch, hearing, sight and smell.

The natives with a great influence of Taurus in his birth chart are very sensual people, given to the world of pleasures and quite material.

His basic principle could be described as “the desire to attract sensually” and both the physical and the material planes play an important role, his motto being possession or appropriation.

Individuals born under the sign of Taurus may be slow to act, but their actions are conscientious and their effects are lasting over time.

They are trustworthy people and they can give themselves up if they want to. They prefer to be around people with whom they are familiar. They need security and that can sometimes cause them to cling to their possessions or become jealous and possessive in their relationships.

They are conservative and protective and tend to be interested in the things they already know rather than the new or unknown. Their interests are important to them and they are determined to defend them.

They are usually calm and constant people in difficult times. But if they hold back their frustrations for too long, they are likely to explode with such intensity that it will shock as many around them. This is the darkest facet of this sign, represented by the Minotaur in Greek myth.

Taurus shares with the other earth signs, Virgo and Capricorn, a sense of practicality. You will feel at home on the lush grass where you can relax and let your senses soak up nature, while Virgo will always separate the wheat from the chaff in “harvest times” and Capricorn will climb to the deserted mountain peaks. .

Like its opposite sign, Scorpio, it has an interest in physical pleasures, but while Taurus emphasizes absolution and delight from these, Scorpio is interested in a deeper transformative power of sexuality.

From the signs square to Taurus, Taurus can learn from Leo how to be yourself and from Aquarius the ability to be different while preserving your place among others.

Taurus represents power and bonanza. It is related to the fruits of work well done, material pleasures and the cult of physical beauty. Touch is of great importance for people born under the Taurus sign, both in romantic and professional life.

Taurus, the bull, is strong and confident without falling into vanity. Like the animal related to this zodiac sign, people under the influence of Taurus do not bow their heads in front of anyone and will not exchange their pride for money or other material goods.

Like the other signs of the earth element, Taurus tends to be overprotective of loved ones and to be wary of hidden intentions.

People born under this sign excel in taking care of the home and enjoy forming a family.

Those born under the influence of Taurus tend to be stubborn and stubborn. However, once their trust is gained they are the most faithful of friends.

It is a sign of stable character, without being subject to mood swings. They are able to perform complicated tasks without falling into distractions, however difficult those tasks may be.

Due to the stubbornness associated with Taurus, it is the most dependent sign of the Zodiac, being influenced by the position of the stars. They are able to remain calm in chaotic situations and remain alert when other signs fall into despair.

People related to the Taurus sign feel comfortable in houses in the middle of nature. They appreciate material goods and also good food. Beauty and comfort are qualities to take into account when building a home.