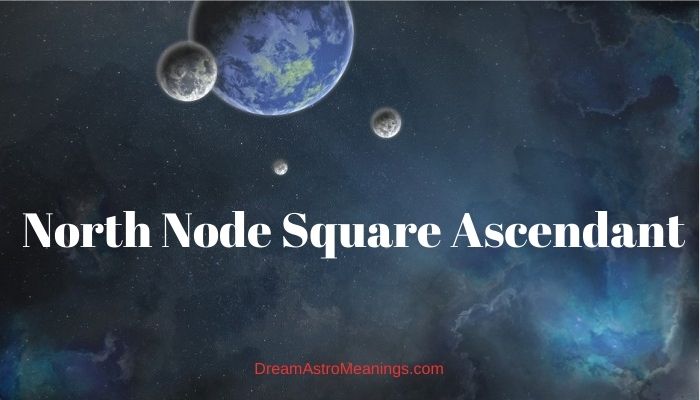 The nodes of the moon are astronomically observed two imaginary mathematical points in space in the lunar orbit, in which it intersects the ecliptic – the apparent orbit of the Sun around the Earth.

These are the points where the paths of the Sun and the Moon intersect, observed from the Earth.

They move exclusively retrograde at an average speed of about three minutes a day, and cross the full zodiac circle in about eighteen and a half years.

As we have already said, the North and South Moon Nodes, Rahu and Ketu, in the simplest terms, represent a karmic mission, a task in one’s life.

Nodes, further, indicate the relationships we will build with the environment, the weak points in our lives and the like. Both one and the other are malefics.

Rahu’s exaltation is in the 3rd or 6th astrological field, while in the 8th, 9th, 11th and 12th fields it gives poor results.

The North Node of the Moon, or Rahu, is associated with harmony in the astrological literature, indicating the incarnation lessons we now need to receive and the path we need to follow.

As it represents the Head (dragon, snake) without a body, Rahu indicates the area towards which all our mind, consciousness will be directed.

Rahu rules over material goods and is not very interested in the essence of the relationship, so he breaks it up.

Rahu can also indicate a bad reputation, malicious acts, difficulties and bad periods in life. “Beating your head” around something would be the right word. “Thoughts of a lifetime” concentrated on a specific area.

Rahu is looking forward to Mercury and it is most ideal to have them in the 4th field.

Also, it would be ideal for Rahu to be in the astrological fields before Saturn (e.g. Rahu in 3, Saturn in 8). Unlike him, the South Node of the Moon or Ketu will give a great time, happy circumstances, but also beheading, especially with the aspect of Jupiter.

The entry of the Southern Moon Node – Ketua in the sign of Capricorn, brought a loss of security and stability in everyday life, primarily on the material – financial level.

The urge to survive, to shrink, to increase materially, and the fear of mere existence (the transit of Saturn through the sign of Capricorn certainly contributes to this).

Without intending to frighten you, the readers of these lines, only this transit of the South Node will bring a break in finances, economy, and mark the collapse of the existing capital. Value systems will be redefined and we will constantly be in doubt as to whom to trust.

So far, it has been important, of course, to strengthen the position, to be resilient, to feel the moment almost instinctively, to act and forget about laziness, hedonism and the line of least resistance to which Keta from the sign of Capricorn warned us.

The lesson was certainly to learn to survive in the material world without money and to know the material outside of material security.

Take into account, of course, the years in which you find this transition of Nodes into the signs of Gemini and Sagittarius, and pay attention to the natural planetary cycles that take place at the same time.

The Ascendant is the most individual point of the entire horoscope. This is a point on the ecliptic that rises at the time of birth in the eastern part of the sky.

Since the earth rotates, each point on the earth’s surface traverses the entire zodiacal circle in a day, so that the ascendant occurs every day in every sign of the circle.

Its position in a particular place depends on the time of birth. It symbolizes the “second of the world” at the moment of birth, with all its planetary positions, which determine the path of life that the born one enters into.

The firmament in the diurnal rotation for every 4 minutes passes almost a whole degree, but due to the inclination of the ecliptic, the ascent of the circle signs occurs in different ways. Distinguish between fast and slow ascending signs.

In the northern hemisphere, slowly ascending signs on the ascendant can be found more often than rapidly ascending ones.

The meaning of the influence of the ascendant will be easier to understand if we agree to believe that all influence begins at this point.

The Ascendant gives information about how a person as a whole reacts to all stimuli of the external world and how his continuous dispute with the influences of this world manifests itself.

The world around a person is endowed with certain properties, and with everything that happens in the world, a person during his life has to reckon with and adapt to one degree or another.

A person’s attitude to the world around him can be either more active or passive, and sometimes he is in a position of rest.

The property of being in constant readiness for reaction is determined exclusively by the ascendant: it affects more strongly than all the constellations, and determines the sum of all influences perceived by a person.

From the moment of his birth, a person is formed and changed under the influence of the environment, and his physical, mental and spiritual functions are constantly changing. How these changes occur, as well as the effectiveness of the methods of adaptation, the total value of the ability to react and, possibly, sort the impact – all this is determined by the ascendant point.

No person on earth is born with a ready-made character. Only different attitudes that can be developed are inherited and innate. Whether they actually develop depends on the living conditions.

Let us illustrate this statement. Let’s say a person goes to the gardener and buys a certain kind of rose bush from him. The gardener says that when the bush is in bloom, the flowers will be yellow.

If we draw an analogy with a person, then we are talking about predetermination, that is, the sum of innate attitudes.

Nothing can be changed here, and having bought a certain sort of rose, one must expect a certain development. The basis for development is, first of all, the sum of hereditary factors.

When the moon’s nodes change sign, it is an important astrological event but no less important personal.

The dynamism and general energy that these parts of the Moon bring us is changing. All signs will feel it, and the key changes after the age of 18 refer to Gemini and Sagittarius in sign and ascendant.

In general, the south node represents all our experiences and us as we are, while the north node describes what we need to become and where we need to go and direct our energy.

The transit north node in Gemini strengthens ambition and desire for progress, so it is of primary importance how Mercury is placed in your natal chart, because it talks about your efforts to reach the future and achieve your life goals and missions.

Everyone born with the Sun or an ascendant in Gemini has the opportunity to work on changing circumstances that can change their lives from the bottom up. But in a way that is naturally appropriate to their true mission.

Depending on where your Sagittarius and Gemini signs are, in which field of the natal chart, that area of ​​life wakes up and brings you changes. Other members of the zodiac can use this energy for better self-presentation in communication, speaking and writing.

Thus, for example, those Gemini who write poetry and prose will have a chance to produce a major literary work. Gemini is not only a double, but also a social sign, so it is possible to move to a new position on the social ladder here.

Gemini are often lovers of a free and immoderate life, so now is the time to make a profound change in cooperation and tact with other people. It is their challenge, because they do not feel when someone is trampled or insulted, because they act like an elephant in a glass shop. They inadvertently do damage.

That is why it is necessary for them to at least sometimes look at the world through the eyes of other people.

Then they can be fully realized and ascend to a higher social level. They are climbed on that pedestal by the people they are in contact with.

That is why it is important that they have the support of individuals and the social milieu in which they operate. They are completely unintentional and unaware of their actions.

However, this is energy that will generally contribute to a change in the presentation of news, information, speech, but also in the way information is consumed.

If Mercury is well placed in your natal chart, then you can expect easier realization of plans and goals.

The twins may get a chance to make an important decision after a long dilemma.

During this period, it is time for an intellectual approach and realistic plans that can significantly improve your life, good and different cooperation with the environment.

In case the natal Mercury has bad aspects, then pay attention to bad decisions and wrong actions, and most of all to the present fear of change.

Therefore, it is necessary for Gemini to go through the door of cooperation with thousands of people who go through their lives in order to be able to leave something good to civilization.