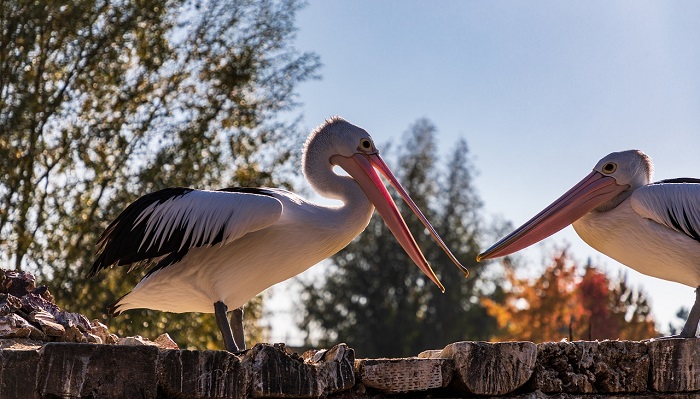 Pelicans are a genus of water birds, easily recognizable by their specific appearance. There are several species of pelicans, living in different parts of the world, but all of these birds share similar characteristics.

Pelicans are recognizable by their short and thick legs, large bodies with big heads and specifically long beaks.

Of course, we all recognize pelicans by their special throat poach. Pelicans are truly amazing birds.

They are excellent swimmers, but they also could fly high and for long distances. Their strangely shaped short bodies may appear a bit clumsy and it is so on the ground, but pelicans are true masters of both flight and swimming.

They feed on fish and they hunt together; pelicans are sociable birds. They sometimes catch other water animals. Pelicans are tactful and skilled team of hunters.

These water birds are devoted and passionate parents.

They lay about two to three eggs only once a year and both parents take care of little ones. They build nests near water, in bulrush.

Their strange beak poaches serve as storage for semi-digested food they use to feed little pelicans.

Pelicans are known for taking good care about their few cubs. One legendary story tells more about the special bond between pelican mother and her dear children.

Early Christians have a great respect for pelicans, an admiration for female mother figure of pelican that originates from times before Christianity and a story of her sacrifice.

According to this legend, there has been a long period of great famine, which lead to starvation of all living creatures; all those weak and too vulnerable have been stricken by famine first. 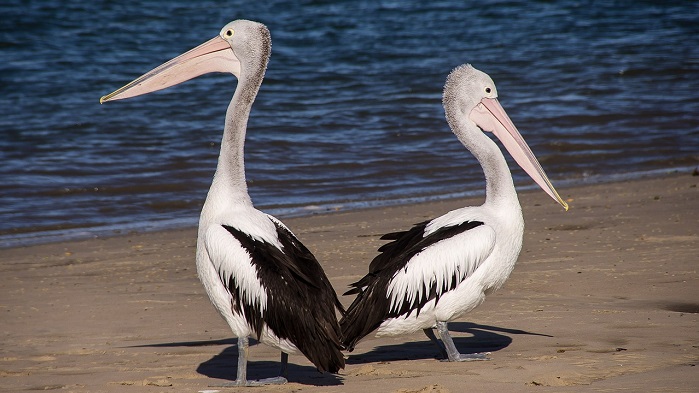 There was a pelican mother with her little ones; there was no food she could find and give them. In order to save her little ones from starvation and offer them a chance of survival, the devoted and caring mother pelican cut her breasts by her own beak; the blood from her body was the only nutritious thing she could possibly offer her babies.

There is one more version of this legend that tells about mother pelican trying to save her cubs from dying, also by feeding them with her own blood. She has saved her young ones, but died herself.

Early Christians interpreted this great story in their own way, so pelicans became a symbol of Christ himself and his love, devotion and sacrifice to people.

Pelican’s blood from the legend was symbolically associated with one of the crucial symbols of Christianity, the blood of Christ.

The story itself is cruel, but inspirational; it tells how little ones would fight their mother while she was feeding them; mother pelican fought back and kill them. However, she loved her children and so she cut her breasts, poured her blood over her dead children, and revived them.

In Christian interpretation, this is an allegory of Christ, his sacrifice and his resurrection and people’s relation with him and his deeds.

The symbolism of pelican is probably the strongest in Christian tradition and there it stands for love, sacrifice, charity, mercy and devotion. Pelicans are also mentioned in folktales and fables.

One of Aesop’s fables tells about the Pelican and the Ostrich and it is more or less the same story as those previously mentioned. However, in this version the mother feeds her little ones with her own blood to provide them the best vital nourishment they could possibly get.

In her blood, there is not only food to grow, but also true devotion, true love and true sacrifice.

The Ostrich was shocked by this sight and thus explained to pelican the way ostriches feed their children and take care of them. However, the Pelican responded that the manner of ostriches is too cold and to unaffectionate and that the pain she endures feeding her babies is actually the pleasure, for she knows she has given her best as a caring mother.

A Hungarian folktale titled The Pelican bird is something different; it is a classic fairytale about a sad princess and a devoted servant boy. According to this folktale, a king had a singing bird that he adored.

Since he was very sad about that, his daughter announced that she would marry the man who finds the birds and brings it back. As it goes in fairytales, a servant boy was the one to accomplish the task and married the beautiful king’s daughter.

Pelicans are also featured in literature and art. Just to mention the Pelican from one of the most popular children books ever, Peter Pan, by J.M. Barrie.

There is an astonishing depiction of a beautiful white pelican, painted by the Dutch animalier painter Melchior d’Hondecoeter in seventeenth century.

It is an astounding example of Flemish art and definitely one of the most beautiful examples of pelican portrayals in classical art.

Pelicans are associated with many positive ideas and concepts. As we can clearly see, pelicans stand for some of the greatest Christian values.

Of course, those are universal values, regardless of people’s confessions, religious systems and spiritual paths. Symbolism of sacrifice, devotion and love is important to all people around the world. Pelicans symbolize many more things. Let us find them out.

These amazing water birds symbolize balance, harmony and calmness. Pelicans are friendly and sociable birds and they are not aggressive. They embody the idea of harmonious life in community.

Pelicans stand for keeping the pace, steadiness and safety. They also represent patience and resourcefulness. These versions of story about the pelican and its children probably illustrate the symbolism of pelicans the best.

Therefore, pelicans remain a symbol of generosity, kindness, compassion and devotion. They teach us we should always take care about those close to us; even if sometimes they appear to us as ungrateful and rude.

Sometimes people cannot express their true emotions and hide themselves behind the mask of coldness, cruelty and mercilessness. However, it is not always the real truth.

Pelicans symbolize charity, unconditional love, support and understanding. They embody the idea of sacrifices we all have to make sometimes.

Symbolically speaking, pelicans are portrayed as beings ready to give everything they have in order to save something that is precious to them.

That is the lesson all people should have in mind. So, if a pelican appears in your life, if you see it or dream about one, think about your priorities.

They also represent forgiveness, which is also seen in legends about the Pelican’s sacrifice. To embrace, accept and forgive is probably something we people should be constantly reminded of.

Pelicans are the ultimate symbol of peace in life, of family love and all the things we value in life.

They also represent an incredible strength and courage, for it is something essential in order to make any sacrifice and choose your path wisely.

Pelican totem is a true guardian. People born under this totem are incredibly brave, but they would never ask for medals and gold. These people are affectionate, compassionate, loving and caring.

They are ready to give up everything for the sake of the benefit of their closest ones, especially their children, if they have it. They are known to be some of the most selfless and generous people.

They are friends who will stay with you during the darkest of times, not only when everything is jolly and fine. Pelican totem is calm in nature, polite and calm.

They love to listen to others, more than to boast about what they have done or accomplish. They feel comfortable in company of others and are always there to make the atmosphere enjoyable and serene.

Pelican people have a lot of practical experience about many things in life, so they are good to look up to and take a good advice from. These individuals are patient and unaggressive.

They are very cooperative and work efficiently both in a group and alone. They do not find it hard to follow others, but they are not foolish and would always think through any decision or action they are about to make and take.

Pelican people give others good example on how to be honorable, brave, successful and kind at the same time. People guided by Pelican totem possess that kind of bravery and courage that is totally overlooked, but the most precious.

They fight small battles in order to provide the best for their loved ones and for themselves; Pelican people know why they live for.

They know life is full of mistakes, challenges and misfortune, but the praise all the good things that happen, even the smallest steps people tend to take for granted and forget.

Pelican people are lovable and graceful. They are extremely reliable and loyal, but not susceptible to manipulation.

However, they would rarely get angry if they see someone is trying to take advantage of their kindness.

They just mind their own business and see not to allow bad people to exploit them, they do it in a calm way; pelican people know all humans could be seduced by an idea of easy success, so they have enough understanding to forgive and forget.