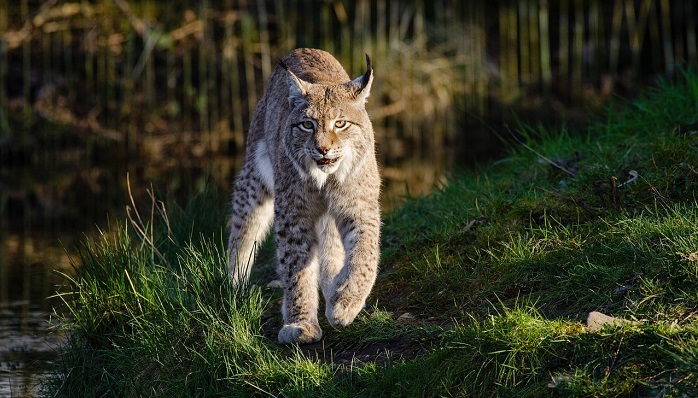 Another beautiful exemplar of the large family of big felines, bobcat is definitely a truly impressive wild cat. Bobcats are not as big as some of their wild feline relatives are, such as tigers and lions, but still they make dangerous predators.

Bobcats are native to North America, inhabiting large area from Canada to Mexico. The greatest number of these charming predators lives in the United States countries.

Bobcats are quite adaptive cat family members, so they could be found living in swamps and woods, but deserts, as well.

In addition, it seems bobcats are not afraid of humans, so people often report seeing them near human populated places. Some people have even reported bobcats entering their backyards and even their houses.

Sometimes, a bobcat would come up to someone’s porch and take a glance inside your house. You can find many videos people share online, with bobcats visiting their gardens and backyards; there is particularly a lovely video with a mom bobcat bringing her little ones onto someone’s porch.

These beautiful felines, with distinctive ear hairs are solitary animals, except while females feed and nurture their cubs.

Bobcats are very courageous animals, having in mind they are not the biggest of wild cats, so they do have natural enemies in other predators. They hunt small mammals, including various types of rodents, such as rabbits and rats.

However, it happens occasionally that a bobcat would even chase and kill a deer, an animal that is much larger, compared to an agile bobcat.

Bobcats are definitely eye-catching animals, such as, well, all felines are, we have to admit that. However, people have been fascinated by their specific looks since far past and especially by their beautiful, fluffy, but thick and lavish fur.

Greedy as we humans are, we have been excessively hunted these animals for fur. Fortunately, bobcat population is stable and these cats are not at the edge of extinction. They still roam over North American continent. People have been amazed by these felines since old times. Local tribes have their stories and legends about bobcats. 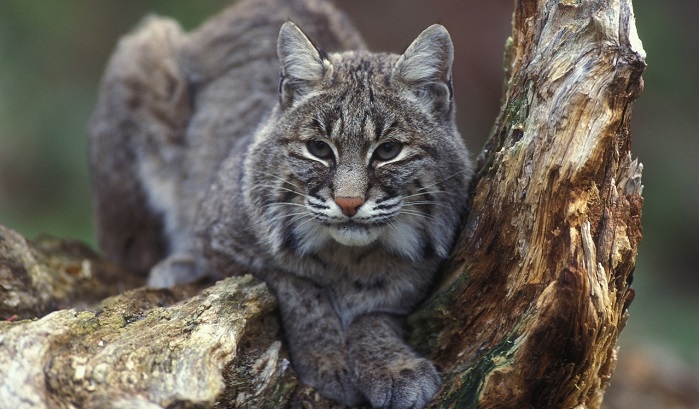 In traditions of North America, bobcats are commonly portrayed as an opposite to coyotes, another important spiritual animal character to local tribes.

In some of local beliefs, bobcats are seen as animals of the same energy as coyotes. When it comes to animals of so impressive and characteristic looks as bobcats are, there are, of course, legends about how did they got their special appearance.

In case of bobcats, we have a Shawnee legend about how did the Bobcat got his spots.

According to this story, it was a clever little rabbit who tricked the Bobcat to make some fire.

The whole thing ended with Bobcat’s scattered beautiful fur, which was totally spotless before the accident.

In all Native American beliefs, bobcats are seen as animals with great spiritual powers.

Mohave people believe that it is especially a good sign if someone dreams about a bobcat.

Since bobcats are definitely skilful and agile hunters, such dreams would often be interpreted as a good omen for hunting. It is believed that if a person has a dream about a bobcat, the following hunting party will be incredibly successful.

When it comes to symbolic meaning of bobcats, it is closely related to amazing natural characteristics of the animal and local beliefs about bobcats’ incredible mystical powers. It is a strong and independant predator, that is, at the same time, so beautiful and breathtaking.

People have always been admired bobcats for their skills and looks, but were also afraid of them.

Bobcats are not fluffy little kittens, although little ones could really be adorable and fragile. Bobcats symbolize solitude, patience and tranquility. These brave felines spend most of their lives alone, which means they have to be well equipped to survive on their own.

These animals are tactful and very independent, which makes them true symbols of self-reliance, self-awareness, freedom and solitude.

Bobcats are not afraid of being alone and taking care for themselves. They are symbols of great patience, needed for self-defense and survival.

These felines are adaptable to various climates and weather conditions, which makes them masters of survival. They are calm and patient; they know a successful hunt requires a lot of waiting, saving energy and being still.

Although people commonly associate bobcats and other lynx cats with aggressive behavior and restlessness, they, in fact, value patience overall.

They symbolize tranquility, tactics and being steady and calm, when needed. However, bobcats are playful as little kittens.

They are also cunning and they use their wits to outsmart other animals. They symbolize both trickery and childish innocence.

If you look at bobcat cubs having fun amongst themselves, you would definitely think how irresistibly cute they are. Bobcat cubs represent innocence, joy and playfulness. While these animals are solitary in nature, bobcat moms take good care about little ones.

This strong bond between a female bobcat and her little ones symbolizes motherhood and motherly love. It also stands for protection, guardianship and guiding. Bobcats, thus, also represent love, support and care.

To be precise, the relationship between a mom bobcat and her kittens symbolizes all of this.

Bobcat totem is a true blessing for people guided by this fantastic feline spirit. Bobcat people are also solitary, introvert a bit, but they are neither shy nor isolated from the world.

They are intelligent and quick minded, so they do not want to waste time on foolish things.

They are active, agile and athletic, but they would never push themselves too hard, so that it could cost them their health, in both mental and physical sense.

These people are intuitive, imaginative and creative. They are both good storytellers and good listeners. They spend most of their time on their own, so they really enjoy socializing from time to time. You would easily recognize them for their incredible charisma and shining aura.

Bobcat people are figures others look up to; they outshine everyone in the room, even if they do not seek attention at all. They feel comfortable about who they are and are not of offensive nature.

However, they could be a bit stubborn and they do not like others telling them what to do. They like to command, but would not die to have leading position in any social circle.

They are self-reliant and independent, so having responsibility over other’s doings is not their cup of tea. They love being unique and unpredictable.

While they are not the most reliable to make deals with, bobcat people stick to their words, only they are pretty unlikely to make promises in general. Bobcat individuals are caring and loving, but only towards a very restricted number of people.

When it comes to love life, they would rather stay alone, then enter a relationship just not to be alone. They value their solitude over any relationship they see even slightly unfitting.

Bobcat people have all talents and gifts to make themselves a wonderful life, but it would probably be better for them to let other people get at least a little closer.