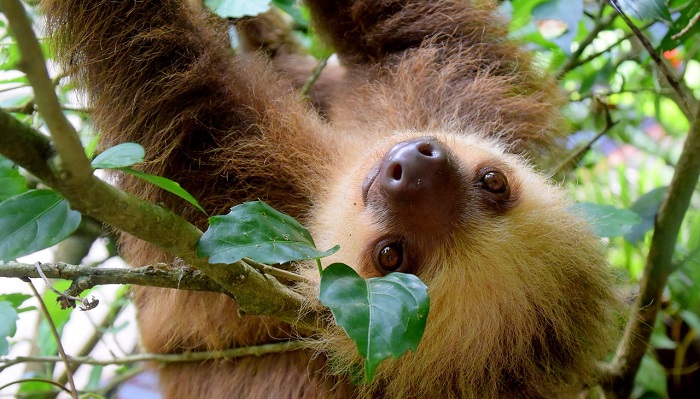 Perhaps one of the strangest animals on earth, sloth is also one of the oldest mammals today inhabiting the earth. Sloths are ancient animals that could be seen only in tropical and central parts of the American continent.

Sloths live in rainforests of Amazon, Brazil and in some parts of Central America. There are several types of sloths, although people usually talk about them in general. In fact, there are six varieties and two groups of sloths.

These animals are probably best known for their extremely slow movement, for which people commonly associate sloths with laziness.

Well, while we cannot actually say sloths are lazy as we humans could be, they are definitely laid back fellows. However, their slowness is an incredible survival mechanism. Sloths are very old; they are probably more than sixty millennia years old.

Some archeological and biological findings claim sloths were present in South America one hundred millenniums ago.

Sloths feed on plants and leaves, although one of six types eats ants. Sloths’ diet makes them slow and laid back; these fellows do not need either to move faster or to waste energy on something else than just hanging from trees.

They have evolved to feel at their best in treetops, slowly moving over branches; actually hanging from them. They only need to reach juicy leaves, nothing more.

The first thought that comes to people’s minds when it comes to sloths is that they are lazy. People who have never seen a sloth or even a picture of this animal know about that and would even compare a lazy people to a sloth.

However, there are many interesting facts about these animals you have probably never heard of.

All of these fascinating facts will help us better understand and interpret sloth symbolism.

To begin with stories from far, ancient past, we have to mention that sloths were much larger in prehistoric times. 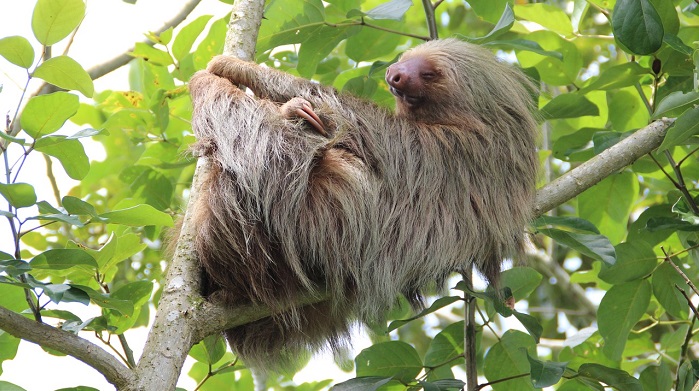 These animals were true giants, while today’s sloths are medium sized animals, much smaller compared to a human being. These colossal prehistoric sloths were heavy and big; they weighted about seven hundred kilos and were about seven meters high.

Today, they are extinct.

However, people’s imagination never ceases. There are still legends and local beliefs about these giant mammals walking the earth.

No official scientific proof has been made to confirm the presence of a living giant sloth in Amazonian forests. Science claims they have been extinct in total, many years ago.

Although people commonly associate sloths with terrifying odor, which is also seen in this local mapinguary story, sloths are not smelly animals in nature. In fact, they do not produce any smell at all, because they do not sweat as well.

The lack of natural smell and sweat is another fascinating evolutionary design that makes sloths survive. Since they do not stink, they become invisible for many predators that search for their prey using their sense of smell in the first place.

Wild cats and other animals that are skilful and agile when climbing trees, mostly rely on their sense of smell when searching for food.

Sloths, without producing any sort of body odor, remain unnoticeable to them. While we also consider sloths dirty animals that do not like baths, the truth is different. Sloths are clumsy on ground, but these animals are excellent swimmers and they enjoy it.

Not only they are agile in water and they swim with ease, but also sloths are amazing divers.

They could endure more than forty minutes of diving on a single breath. Most of people could hold their breath for about a minute, if even so.

Sloths would gladly come down from their trees and have a swimming session. Another common misconception about sloths is related to their laziness and sleepiness.

People wrongly accuse sloths for being sleepy all the time, to say so. They do love sleeping, but not nearly as much as, for example, a domestic cat.

In nature, sloths actually sleep for an amount of time similar to humans, about eight to nine hours. Sloths could sleep for twenty hours, but it usually happens with those exemplars held in captivity. Well, what would they do instead?

Sloth symbolism is greatly based on biological characteristics of this incredible and strange animal and, perhaps even more, on our perception of its natural traits.

While we have learned that sloths, in fact, are not actually lazy animals, their slow movement, their strange appearance and natural habits make us think of sloths as universal symbol of laziness.

However, in symbolic and spiritual sense together, sloths represent something more.

In addition to our (miss)interpretation of sloths’ behavior as simply being lazy, their slow movement and hours spent in the same position symbolize something more and, what is more important, more positive.

These strange animals see to make their life comfortable, without asking much. They do not waste their energy and they carefully pick leaves they love to eat and so.

When they get tired of hanging from trees, sloths would take a good swim. They remind us to stay relaxed and comfortable with what we have and, moreover, with who we are.

They symbolize joy, small pleasures in life, modesty and tranquility. They represent the importance of silence, balance and peaceful approach to life in general. Sloths symbolize harmony with the world we live in.

They would rarely attack other animals, but they are capable of doing so.

People still tell stories about killer giant sloths who would grab humans, choke them with their long claws and kill them. However, sloths are not aggressive in nature and they maintain perfect balance within their natural environment.

As we have mentioned, most of them are herbivores.

These intriguing creatures also represent meditation, introspection and solitude in the most positive way. Sloths represent ability to be at peace with yourself, to open your soul for new discoveries deep within.

Sloths also symbolize introvert personality and shyness, because they are calm, silent and definitely not animals that attract attention. They also symbolize safety, routine and steadiness in life.

These incredible animals teach us one of the most important life lessons, to accept the world and to embrace your own self.

Sloth totem is a positive spiritual guide that teaches peace, tranquility, kindness and understanding. Sloth totem people are individuals with good hearts and a lot of compassion.

They are often introverted and shy in combination. They spend hours and hours alone, thinking about life and usually in a positive light. They like steadiness and stability; Sloth people are not the most adventurous ones, especially not the ones daring to take great risks.

They love routine and have well-organized lives. They are kind, gentle and emotional people, who have a lot of love for the world.

However, they often find it difficult to express emotions, so people commonly misunderstand their behavior and see them distant, reserved, indifferent and cold.

That is not the truth, Sloth people are caring and loving, but it takes time for them to open for others.

Sloth people are laid back and patient; they do not get angry easily and they are not quick tempered.

Sometimes people take advantage of their good heartedness, which is something Sloth people should take care about. These kind individuals are helpful and supportive of others, even if sometimes it seems they do not care at all.

The thing is, they do not seek attention and it does not matter to them if others recognize their contribution or not. These individuals are imaginative and dreamy; they love to fantasize, but they do not lose ground.

Sloth people do not like crowds and big events; they do not feel comfortable in environments with a lot of noise and too many people at one place.

They prefer taking long, steady paced walks, spending time in nature, reading or writing and all other relaxing activities. Sloth individuals are amazing friends, the type of friends that would always have time and understanding for you.

They are probably amongst the most loyal and helpful of all people. They rarely ask others for help, but offer kindly to help others.

They extremely rarely enter a conflict and they feel very uncomfortable if they have to argue.

People born under this totem are adaptable to various situations in life and they know hard times come and go; you have to endure, because there is actually no other option. In one way or another, you survive.

Sloth people strongly believe the most precious and important thing in life is to have enough patience and enough spirit to go through all the challenges.