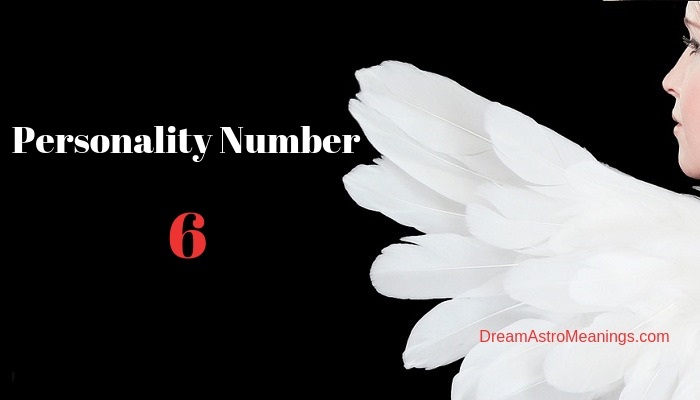 It would be wise to know all of your numbers, those that are part of the name and the surname turning the letters into numbers but the simplest calculation is that of the Fate number, is already a useful indication, although it is the interaction between all the numbers to outline a complete and consistent profile, if a person has the 1 in the destiny will certainly have the characteristics of the number but if in the other positions there should be 7 could be directed towards a more introspective and spiritual path and adding 2 could be a leader more sensitive and less decisive, there are many variables, as many as numbers.

The Six is ​​a composite number and has the following divisors: 1, 2 and 3, since the result of the sum of the divisors is 6; it is defined as mathematically perfect number.

“The number Six” represents the perfect balance and absolute love, is the number of harmony and beauty, has a practical sense that combines a strong creativity; sensitive to art has an innate good taste, sober and elegant, loves to welcome his friendships at home having a strong sense of hospitality.

The Six is ​​idealistic and eager to help others can become skilled in the art of mediation and compromise, accepting people and situations as they are; the key word is “live and let live”.

The aim in this life is precisely to “rediscover the heart”, cultivating the virtues of love, compassion and tolerance.

In relationships, the Six spontaneously falls into the role of a psychologist and if he does not pay attention he takes care of the partner until he cancels himself; the same thing is also true for the family of origin, the six holds a lot to his affections and is interested in every aspect of their life.

Generally, he does not like sudden changes and prefers to stay on familiar terrain. At work, you may feel comfortable as a teacher, educator, and restaurateur or in an activity that requires creativity, diplomacy and a sense of aesthetics.

The first evolutionary step 6 expresses itself as an integral and conscientious person, is available to offer his help, but does so with the aim of being recognized, if this does not happen, his expectations are disappointed and insecurity and discomfort become a state mood.

Second evolutionary step in this phase the person becomes aware of her and of her own value, learns to take care of her, while working also for others she does it in respect of herself and begins to not create more addictions by learning to say no.

Third evolutionary step the angel has now learned to be autonomous and gives the energies in a balanced way not establishing relationships of dependence, but also teaches others to be autonomous, has matured its spaces and its needs finding the right proportions between giving and receiving. He understood how to give his love and no longer puts conditions.

The number 6 could be called the cosmic father or mother: loving, caring, understanding, full of sympathy and cordiality.

Someone who is very homely and would like to mother everyone she or he encounters. You want to live in harmony and strive for stability, steadfastness and justice.

You are a house sparrow and a born counselor who is always out to raise the level. You are idealistic, conscientious, dedicated and well-balanced. You are a pleasant talker and not infrequently you know how to heal wounds from others through your words.

The 6 has the need to serve others, but must ensure that he does not impose his services or offers them unsolicited.

A negative 6 can sit full of fear complexes and worry terribly. You tend to become a busybody. You are narrow-minded, dependent, and you stick your nose to things you have nothing to do with; you are also much too conservative.

You have difficulty giving something away; you always have the feeling that you have more or less forced yourself into it. You can be cynical, selfish, suspicious, a house tyrant, jealous and full of misplaced compassion that nobody cares about.

The number 6 should not show too great a possessiveness. You have to learn to see when it is better to leave the other person alone so that he learns to stand up for himself.

The six is ​​contained in the hexagram, the six-pointed star also known as the Seal of Solomon, is the intersection of the 4 elements of nature (water, air, earth, fire) and two equilateral triangles that intersect upside down (merkaba ). It represents the opposite forms that complement each other until they take the form of a single body.

For the Christians, the Six is ​​the image of Christ represented in the two natures, human and divine (33). In ancient times the Six was consecrated to Jupiter and to Venus, considered a symbol of beauty and perfection, in the ancient Mysteries it was important because it offered the Six dimensions of all bodies, plus those of height and depth, or the four cardinal points added to the Zenit and Nadir. The sixth atom of the periodic table is carbon, the basis of all the chemistry of living organisms. Its function is Conjunction.

6 is the ability to build any dream and situation but also to feel that any situation, when it is no longer useful and functional, when it does not make us grow or risks instead reducing the size and potential that we are, can be dissolved. 6 is there to grasp the connections, the synchronicity between the existences and the consciences, beyond the materiality of the real.

It is beyond the five senses, the facts, the people, our experiences and knowledge introduced in a subtle and transparent, highly efficient plot, which brings new resources, new alliances to our life.

The way of life 6 is the path of love and marriage, so the family and home are sacred values for the 6 because it finds a certain stability and great satisfaction.

It is the epitome of tenderness, gentleness and romance. For him love is an absolute goal and he could not conceive of being alone or of having no one to whisper tender words to.

Not very selective and a little naive, however, he runs the risk of being too easily cajoled by beautiful words or false promises.

The 6 is easy prey for deceivers or manipulators.

On the other hand, once he has found great love, he is a very loyal person, and his love feelings are mostly very deep and sincere. It blossoms totally and gives itself to the other without any limit.

With the way of life 6, the word love takes all its meaning.

The native of the way of life 6 lacks a little rigor but he is sought for his diplomacy, his spirit of conciliation and his sense of responsibility. He is absolutely not one of those who are ambitious or who want to win.

Often his professional life is mixed with his desire to help others and he can then flourish in medical social professions or why not humanitarian.

Whatever the case may be, her kindness and availability are important assets for the career. Very appreciated by his colleagues, he knows how to manage conflicts or tense situations effectively.

A professional career that will not necessarily be brilliant, or source of big income, but above all, fulfilling for the way of life 6, and it will remain the most important in his eyes.

The 6 is a way of life that involves choices to make and it is not always easy to get in the right direction. If the chosen path is positive and ambitious, the climb is fast and leads far and high.

Otherwise, there are hesitations and commitments in several directions whose consequences are rarely beneficial.

Path of Life 6 symbolizes responsibilities that can also be transformed into burdens or trials.

The 6 represents a great sense of responsibility and a harmonious life. Perfectionist and idealistic, the 6 must develop flexibility towards others and not be obstinate or angry when they do not have the same opinions or the same ideal.