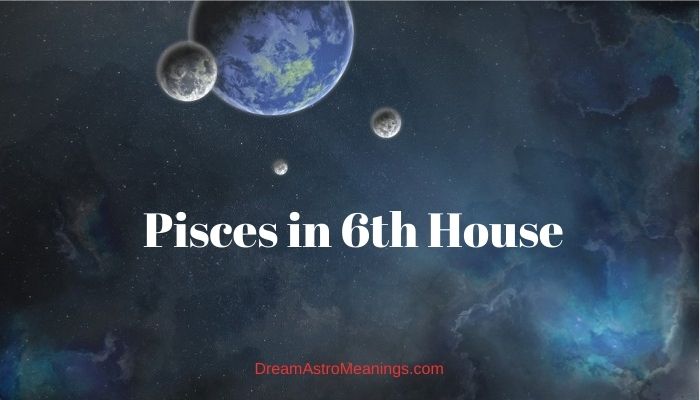 The ruler of fluids and transcendental consciousness – Neptune, being in the 6th house, gives a person illusions regarding work and personal position on the hierarchical career ladder, turning him into an idealistic eccentric seeking informal relationships with colleagues and bosses.

You cannot rely on such an employee if the planet is in a weak position: he confuses deadlines, does not remember where he put important documents, and being a creative person often goes into a binge.

From such people dedication and an understanding attitude towards employees are required. In general, they take on a lot more than they can actually accomplish.

This often leads to confusion and big problems. There is a danger of developing hypochondria and a desire to evade professional responsibility.

A person is ready to work for an idea, selflessly and unselfishly, if the work performed brings at least moral satisfaction. His health is closely related to his state of mind.

He cannot always really calculate his strength and correlate them with the amount of work that he is able to perform. This leads to overwork and illness.

Such people tend to be very careful about their diet, which has a direct impact on health.

Often they realize themselves in the fields of medicine, psychiatry and psychology. They very badly tolerate strict regulation of working hours. Self-determination for such people in the field of activity is not easy.

They are constantly in a state of constant search. They do not like to work a lot, since it is not easy for them, but they wonderfully evade work, replacing it with another, more pleasant and less responsible one, unconsciously putting aside their direct duties.

It is not very easy for such a person to work clearly and accurately, he rather likes to mix colors and pick up chords, rather than sorting wheat and tares or doing calligraphy.

The attitude to work is purely emotional, and if emotions are negative, then the quality of work is noticeably reduced.

Such a person does not like to deal with extremely precise instruments. And in general, it is not easy for him to take up the work itself.

He has established the closest contact with the body, he easily feels all his organs and perceives the state of health as a feeling of the unity of the whole organism – as if all organs and cells live in inseparable symbiosis and complete harmony, while the body seems flexible, warm, plastic and organically included in environment.

A person does not have great physical strength and margin of safety. If he allows his emotions to manifest uncontrollably, he will eventually “work” a stomach ulcer.

Low disease resistance is possible, especially since they are not easy to diagnose. Can excel in the arts of music and photography. Probably a lot of problems in the service and the unreliability of colleagues.

Some kind of creative hobby would be very useful for him, as it would help relieve mental stress. You should fight your tendency to worry over trifles. There is a great need to “weigh” everything and bring into balance and conformity.

This can increase the exactingness of both yourself and the people with whom you have to work. And yet such a person always has enough intuition to be able to stop in time, and only thanks to this alone he is already a potentially good boss.

It is best for a native to work as a freelancer or strive to quickly become a leader, for whom the team will carry out routine organizational activities, and to build successful business relationships, exclude alcohol and potent drugs, to which an addiction instantly arises.

The possessor of Neptune in the 6th house – Michael Jackson, suffered a career failure precisely because of his addiction to psychotropic and painkillers.

Features of the organization of work and health issues Ailments are associated with the lymphatic system and the psyche.

These are often sick children and adults looking for signs of fatal ailments, panicking at the sight of a doctor.

They read various medical literature and are fond of herbal medicine. The karmic task is to draw conclusions from life lessons and unpleasant situations caused by suspiciousness and distraction, to observe discipline and daily routine.

Neptune in the 6th house provokes a state of apathy and soreness, which should be counteracted by bringing cleanliness in the house, on the desktop, in thoughts and actions, without neglecting the simple rules of personal hygiene.

Babies with this position of the planet are carefully vaccinated, they often have allergies and respiratory diseases.

A native will not be able to realize himself in a business that looks profitable, but does not affect the inner strings of the soul.

Inspiration comes from a creative approach to boring responsibilities or through love for a colleague, boss.

Selfless service is given to the native easily, it is no coincidence that Neptune in the 6th house determines the choice of future priests, nuns or nurses, as well as singers and musicians who devote their lives to art.

The influence of the signs of the zodiac Neptune in the initially falling 6th house, symbolizing debts and obligations, dilutes the native’s attitude, contributing to a sense of guilt towards the less healthy and successful.

A person is embarrassed to go to success until he makes everyone around him happy. To get rid of the Neptunian distortion of reality, you need to take on obligations and fulfill them – pay bills, have a pet and take care of it, delegate authority.

In senior positions, they should be gentle with the service staff, so as not to fall victim to their own pride and the revenge of the unjustly offended. 2. Taurus, Virgo, Capricorn – idealize work and a healthy lifestyle.

Careers and caring for your own body and mind are intertwined – they are attentive psychotherapists, doctors, pharmacists, fitness trainers with an innovative approach to generally accepted theories. Higher values ​​are of little interest to them, in contrast to material acquisitions.

They seek to throw off unnecessary responsibility due to an overestimated sense of duty and fear of not living up to expectations, therefore they often find themselves in the shadows. Health depends on professional fulfillment.

Like any water Sign, standing on the cusp of the 6th house, Pisces gives a very emotional attitude to diseases, when defeated, they can give fears, speculations, and a tendency to hypochondria.

Ill, they usually begin active treatment, but they are often treated indiscriminately – everyone in a row – there are qualified medical care, and consultations with a pharmacist, and grandmother’s recipes and, of course, a worldwide and powerful system that turns an ignorant person into an extra specialist – the Internet. Everything goes into action and everything is used.

Hence, by the way, the symptoms that confuse normal doctors – so much has already been done there that it is very difficult to figure out what was at the very beginning, and, as a result, it is difficult to establish a diagnosis and prescribe adequate treatment.

So, the first recommendation to six-domed Pisces and Neptunian’s is not to self-medicate, or, at worst, wait for the established diagnosis.

I also met people who trusted so much to some specialist (no matter traditional or alternative) that they completely lost their vigilance, or earned dependence on the “guru”. Well, of course, dependence on treatment and drugs is also a completely natural topic here.

As for the directly problematic organs or systems, the owners of Pisces in the 6th house or Neptune in the 6th house are pronounced lymphatics. And from this it is necessary to “dance” in terms of defining diseases and conditions.

For example, in childhood, it is an eternally coughing child, with a persistent runny nose or adenoiditis. At the doctor’s appointment, mom regularly has to hear “loose neck”, and eventually learn about enlarged tonsils, tonsillitis, and the already mentioned adenoiditis. They are also characterized by problems with the thymus, and, consequently, with the immune system.

This is a classic case of a frequently ill child. Moreover, diseases tend to be sluggish, at low temperatures. In general, it is difficult to treat such children – their conditions before treatment and at the time of its completion are often not very different.

Of course, the acute stage (which they are generally capable of) is removed, but it will be problematic to completely cure and, most importantly, their cough or nose is stable.

It should be noted that lymphatics react very quickly and strongly to medications, and therefore, it is important to be careful when using some drugs for the first time, and even more so if they are chosen by a person independently, since the second main sore of Pisces or Neptune is allergies…

All types of allergies occur with the participation of Neptune or Pisces. This is a respiratory allergy – from unpleasant but “not fatal” uncontrollable sneezing to bronchial asthma of allergic etiology. Here, by the way, and allergic conjunctivitis.

Finishing the topic of allergies, and children with lymphatics (and in our case, about children with Pisces or Neptune in the 6th house), it is important to remind about the extremely attentive attitude to vaccinations.

On the one hand, it is necessary to do them, since the child’s immune system is weak in order to independently cope with many viruses, for which the owner of such a constitution is like a red rag for a bull.

On the other hand, remember the danger of allergic reactions. Therefore, all the doctor’s prescriptions, from a banal request to stay on the territory of the polyclinic for half an hour after vaccination, to some highly specialized warnings, should be carried out simply unquestioningly. And of course – if possible, do allergy tests.

By controlling the lymphatic system, Neptune or Pisces, being related to the 6th house, can cause lymphadenitis and tumors of the lymphatic vessels.

Moreover, if, in the case of all other Signs, Pluto helped us to distinguish indicators for malignant formations from benign ones, then in the case of Neptune, Pluto’s participation in the formation of oncology is not mandatory.

Although what I wrote above implies a state of general intoxication of the body, I still consider it worthwhile to say about it separately.

There is such an ugly saying about Pisces as about a sign that is a garbage pit of the whole circle. An extremely ugly and unfair statement, but in terms of health, it still makes sense to pay attention to it.

Such people are very often misdiagnosed, and even attempts to remove the symptoms are often useless – you remember, I hope that mutable Signs persuade the disease to “move” from one body to another.

As a result of the fact that Pisces in the 6th house, especially with the defeat of Neptune or the 6th house in general, often gives chronic ill health, some kind of constant sluggish malaise, they are forced to look for ways to somehow help themselves.